You have recently participated in Contain[era], an itinerant project designed to observe and contribute to defining the post-internet era through the works of international artists. The definition of post-internet found its public legitimization with Maria Olson in 2006 in order to continue ongoing discussions and reformulations that have yet to be resolved. The prefix of «post» has been defined in its temporal function and within the delineations of the influence of internet,  its shift into a temporal simultaneity that conceives only the present, and,  in general, within the ambiguity of the term itself. What does the term «post-internet» mean to you? 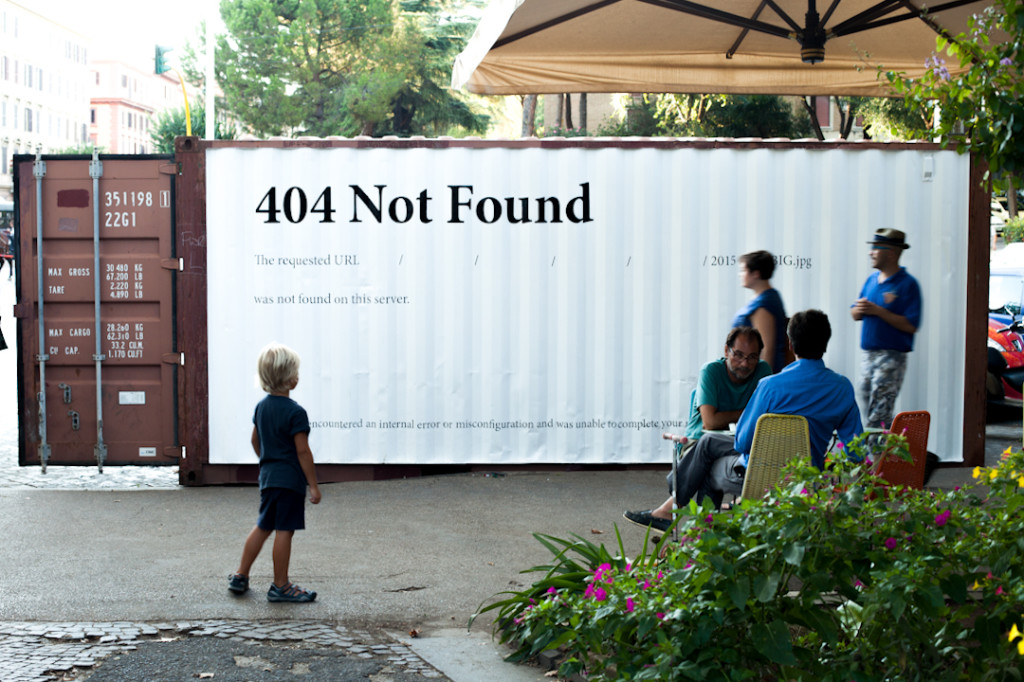 Well, are we talking about the hyphenated Post-Internet or the PostInternet without a hyphen?

I am confused and surprised, I didn’t realize… Let me try:

As far as the PI age is concerned, I don’t think it says much about the period we are living in. I cannot grasp the theoretic foundation of Post interpreted as «a condition that a: cannot have existed prior to the internet (in technological, phenomenological and existential terms) and b:  exists in some way within the influence of the internet, as stated by M.Olson, (…) It is an art that is manifested in the life conditions of a network culture, art after the internet»[1]. But are we talking about art here? Or age? In any case, there was about ten years of mass-internet followed by Post Internet.

But we have been in the Post-Internet now for about ten years (2006-2016) so the time has come for another shift.

It’s fascinating because this approach proves that when something comes up that changes society – like the Internet, for instance – there can be no name for it before it exists but when it exists it is given a name (Internet) and we can theorize a Post-something by saying that it is not temporal but it exists within its influence (?).

But it is exactly because it wasn’t there previously and then it appears that you can stick the POST term to it. At the very least we’re talking about de facto temporal, there is no denying that.

We are living in an age that is probably more mature and diversified in terms of the web. Much more than it was in the beginning – and for obvious reasons…We are in the heart of an Internet age. With the kind of continuous, global access that was not previously possible.

The use of the term «Post», among other things, is annoying no matter what. Maybe we should ask a sociologist for an opinion.

Post-Internet, as interpreted by M. Olson, is doping to cheat the unsophisticated mind.  It closes with: «we can now say that all works are postinternet (albeit to a lesser or greater degree of reflexivity) because all works produced now are produced in the postinternet era.»[2] Italian art critic Sgarbi tells us that all contemporary works are contemporary art so basically anything goes. Besides, when did the post internet begin?

If one stops and reflects upon Post Internet works, it seems to me that there is plenty of room for artists who seek in immediate media recognition rather than for those who are searching for a work of art. PI is a breeding ground for works that are simplistic, foreseeable and instantaneous. I would even define them as obscene in their attempt to be «objects» at all costs, playing the role of the «self-referential, allusive and low-profile idiot» in order to bear witness  to the fragility of a certain youth culture (and not only). YouTube, chat lines etc. (there are even fluorescent colours). But the most sweeping fragility, the intellectual one, is found in the works themselves and even more so in those who make space for them.

There are artists who have «objectualized» the web for at least 15 years. Others who have written in code since the dawn of time.

In my opinion, it seems like an attempt to create hermetic, mini-clubs for their own personal needs.

You outfitted a new version of Localhost for the Container[a]container. The original version was presented in Zurich in 2013 as part of a commission from the Zurich Art University and Deutsche Bank. This is a work that finds its completion in the reception of its audience. Could you tell us some stories about the reactions of the various audiences who have seen it around Europe? (Zurich in 2013 and now Rome and Prague)

That’s not so easy because you would have to spend hours observing them, something that I haven’t had a chance to do yet. This work is a bit visionary and lives on a contradiction: that of «requesting» a tidy intervention but in a «messy» place – in public and without any constraints. And so, the final result is always a bit of a child of this requirement. I was taken by the idea of an intervention similar to participatory murals in progress.

Can you tell us how Koh-iN∞r, the project designed for Contain[era], came into being?

It’s a video from 2014. Koh-iN∞r means «mountain of light.» A brief video illustrates how a generation like mine is a go-between generation that acts as a digital «walking cane» for an ancient world (my father’s world) and a springboard for a new world just waiting to be developed which will belong to my children.

The white polygons are actually screens of my portable devices that illuminate reclining figures locked in an embrace with their light and they create animated choreographies with a tinge of Japanese manga. It’s a hypnotic loop with an unpublished track by Moby. His agent released it to me with a commercial concession agreement stipulating that 20% of all profits go to a foundation endorsed by Moby that helps animals.

You witnessed the birth of the Internet and you adopted it to your work immediately: a subject of your paintings or as a «live» tool to be included in your installations, acting on different levels. Each of your works has – in one way or another – (spontaneously) crossed over the Internet’s many evolutions. Was there any time when you particularly felt the Internet shift into a new phase? If so, which of your works do you think best represents this change?

There have been times when I could really feel accelerations or changes. I can’t say whether these had any influence on my work or not. I’m referring to Flash, its constant improvement and its explosion into a standard all over the globe. And to social networks, too, although I have kept my distance from those. There has been a wave of Second Life…which seems to be trying to re-launch thanks also to immersive hardware at accessible prices.

You have always created original works as well as fascinating instigations addressed to the digital market where the fleeting, transitory and dynamic aspects of your art create resistance from collectors. For example, with AltarBoy you created a work of software contained within a physical component (a suitcase) and you made sure that the collector could decide if and when to share that part of the content suited for the web. Then you designed a new format that included the work in artist books. Can you tell us about this project of yours? 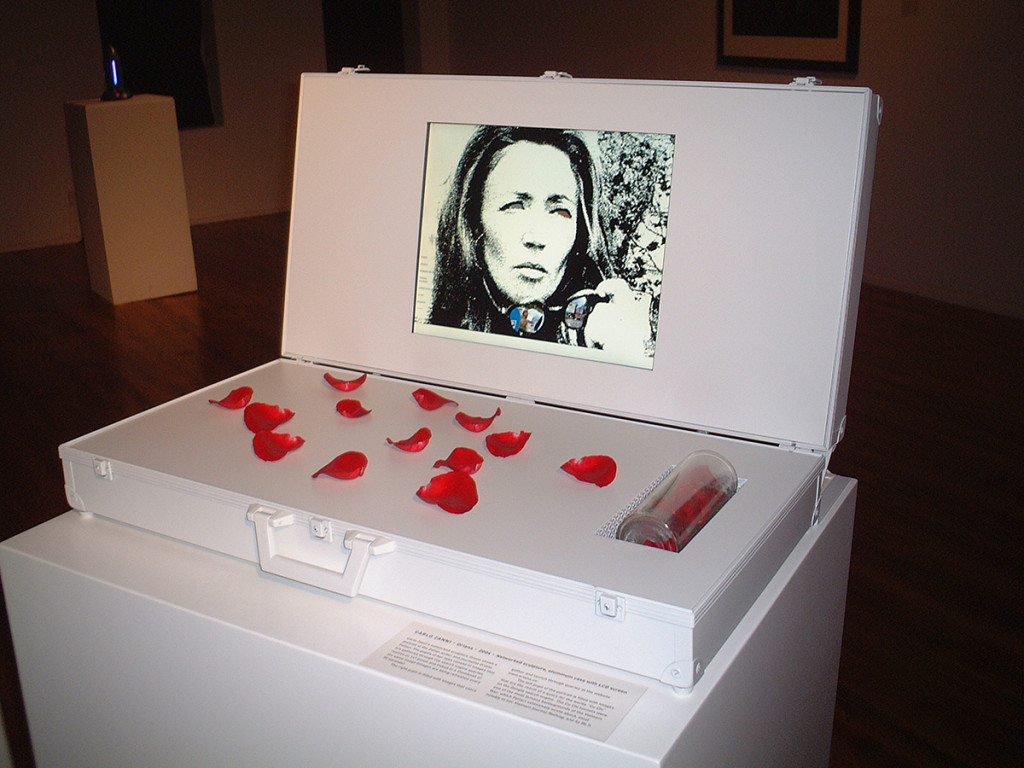 AltarBoy was very complex, perhaps too complex for the time (2003-2004). A laptop, hidden in a suitcase, acted as a web server with a work that the audience could interact with while obtaining images from the CNN. The physical server, the code hidden in the sculpture was sold and the TLD name, the Internet domain was transferred. This way, the collector became the owner of the code, server administrator and owner of the website name.

ViBo, on the other hand, is an extremely less complicated project and I’m trying to develop it with Paul Young Projects in Los Angeles – expanding it to other artists. It’s like a book-shaped USB stick with an incorporated LCD screen. I use it to sell single channel works (and others, too). You buy it and download files onto your computer, to then store them and preserve them.

The idea behind this is to try and sell video art and certain web works with a model that is more similar to books and music than to painting and sculpture. So, potentially unlimited copies (unsigned) at accessible prices. Then there’s the digital download.

You have always worked with a variety of materials. Aside from the many different types of experimentation, painting has always been a part of your artistic quest. We talk about post-analogue painting these days. What does this term mean – if it means anything at all – to you? What place does painting have in your current research?

You know what? The use of «Post» makes it impossible to think up new terms and, to paraphrase Wittgenstein, it obstructs our ability to dream of new worlds and «Whereof one cannot speak, thereof one must be silent».

Carlo Zanni will be present within the itinerant project Contain[era] that from October 24 will be in Prague where all the containers will present with their respective projects. Island Štvanice, Prague, 24.10.2015 (opening) – 7.11.2015

Contain[era] is the itinerant project that has been exhibiting eight containers converted into mobile galleries since 20 August, 2o15. These containers feature the works of eight artists and are touring eight different cities: Prague, Bratislava, Warsaw, Budapest, Rome, Zurich, Berlin and Vienna. The journey along a circuit connecting all participating cities continues and its final destination is Prague – scheduled for 24 October.

“The main topics of the Contain[era], materialized Information Transfer in the Post-Internet Era international exhibition project are sharing and obtaining information, bridging the gap between local and global information and discovering our roots in the new Post-Internet era”.  “One of the ambitions of the Contain[era] is to materialize the mode of information sharing which we have become accustomed to in the post-Internet era. We constantly unplug content and implant it somewhere else, sharing is the beat of our generation,” specify the project initiators: Alexandra Karpuchina –  Art Director, Jana Kubátová, Inter-Art and curator Magdalena Hartelová. Artists: Adéla Součková (CZ), Dionýz Troskó (SK), Janos Bruckner (HU), Karol Komorowski (PL), Angela Kaisers (DE), Lukas Troberg (AT), Till Koenneker (CH), Carlo Zanni (IT).Rome has also contributed thanks to the participation of Label 201.