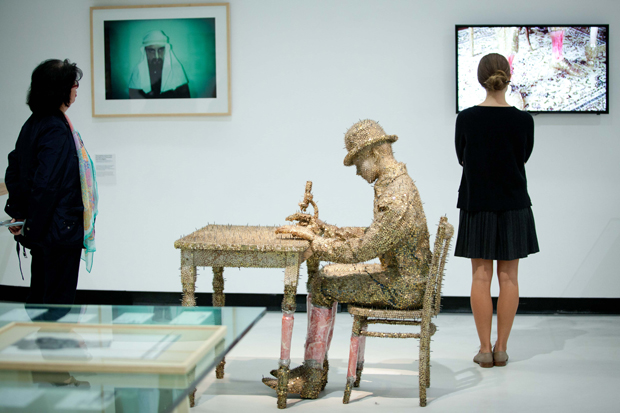 Technology interpreted as a discussion on art. Art as life, as interpreted by Beuys. Life at the service of art, as interpreted by Fabre. The evolution of the exhibition at Rome’s MAXXI Museum presents the perpetual dissolution of physical, psychological, expressive and sensorial barriers to reflect the Belgian artist’s style of interfusion; the kind of permeability implied in the proclamation of My body my blood my landscape echoed in the bouncing back and forth of audios, videos, documents, quotations, sketches and costumes for the stage. Stigmata on both the body and mind – the effects of an artist’s Passion who re-enacts a constant suspension between life and death through personal performative immolation.

In the name of a spiritual quotation, as seen by Fabre, the interpretation and re-elaboration of the Flemish masters are the bread and wine of a Eucharist that is always being performed and being constantly fed by recollections connected to the history of avant-garde movements, entomology, medicine and filmography – leading us to an analysis of the artist’s own social condition.

Fabre’s art is a pre-crucifixion ceremony which he proposes to the public. Proposed simultaneously in an exhibit with the same ritualistic style that evolves from the artist’s personal archives to the re-enacted performative operations seen in the videos. The exhibition takes full advantage of available space and technology in the most natural and skilled manner to create a coherent stream of consciousness between the works that display forty years of «thinking models» (as Fabre refers to them) in which externalized memories re-activate the scourging of the body. 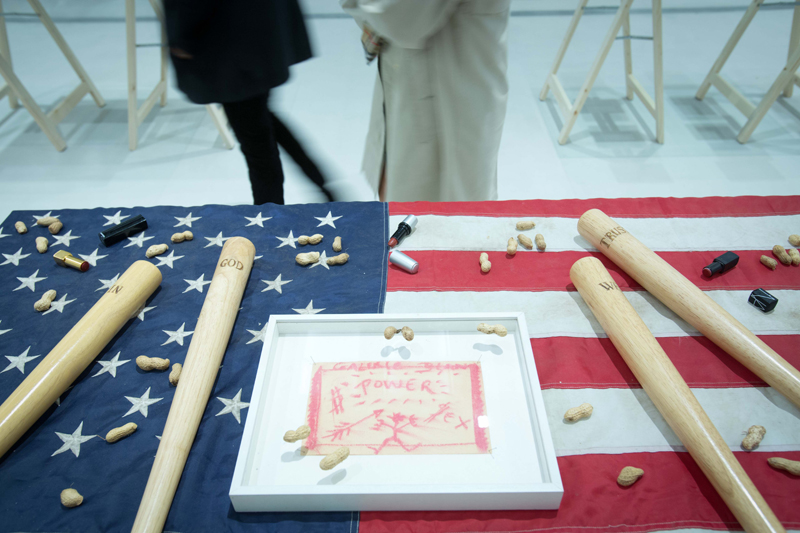 The exhibit unfolds starting from the critical reflections on the value of money and the work of art initiated by Fabre in 1978 with the action of Money Performance in which considerations upon the power of money in the world of art are set up through play on words and in Duchamp-style ‘ready-mades’ to then evolve through the theorization of «Ball-pen art» brought into being by the Belgian artist by means of irreverence towards the masters of the past (in the Ilad of the Bic-Art performance – 1980) and through the claustrophobic and obsessive act of writing (in The Bic-Art Room – 1981).

The condition of the artist as a «planner of the impossible» is elucidated by Fabre in his autobiographical and quotational sculpture The Man Measuring the Clouds in which the sense of precarious balance is a tribute to death, the role of the artist and to his undertaking of measuring the clouds – inevitably doomed to failure.

The atonement of a sin – that of being an artist – seems to justify the action of Sanguis/Mantis (2001), in which self- stillicide represents both the overcoming of physical limitations through a theatrical performance as well as an awareness of the artist’s condition intended as the disastrous «warrior of beauty». 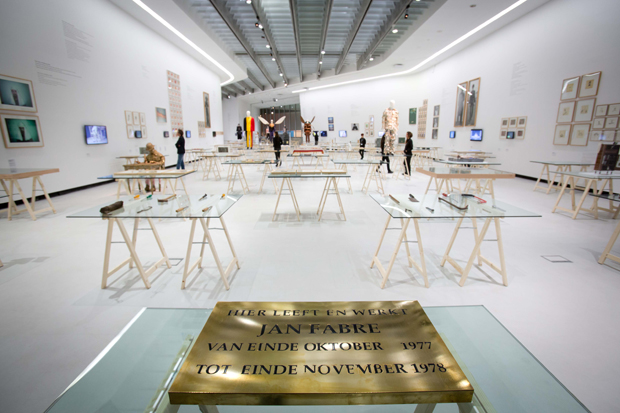 The liberation of art within art that takes off with inspirations offered by the masters of the Middle Ages such as Van Eyck, Bosch and Brueghel the Elder and lands with a release that makes its way to the very bowels of the artist who is encouraged (but never forced) to get on the same level as a criminal – in that common condition of «outsider».

As intended by Fabre, Performance is a perforation of oneself, a crossing that departs from the mind of the actor to reach the mind of the observer to then return again to the body of the artist with a strengthened sense and nourished yet again by his own blood and art.