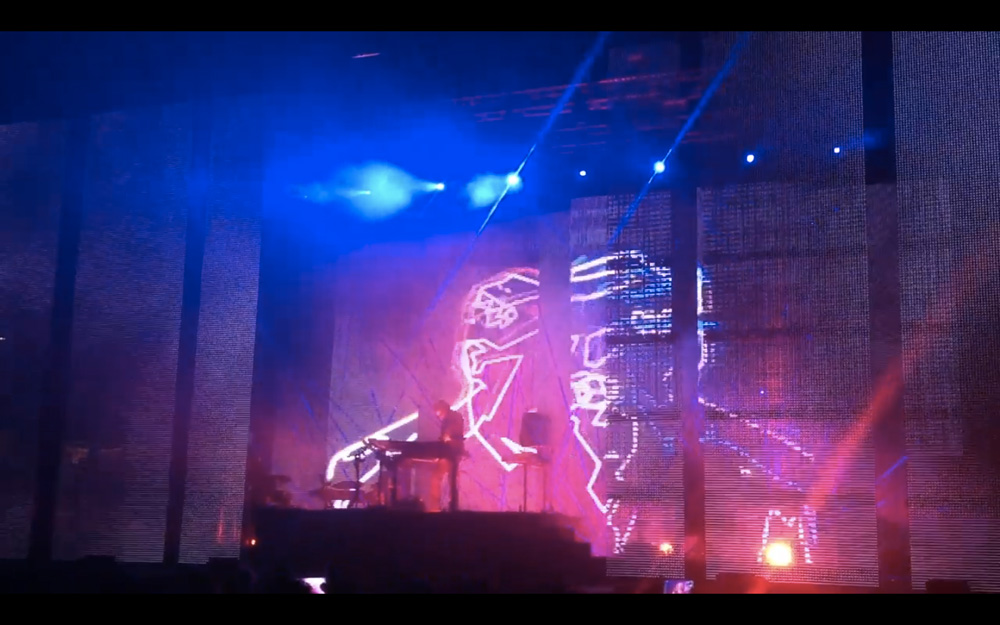 Forget about suffused and interplanetary melodies, the purest of his concrete music, and immerse yourself in a mélange of dream music, pop, techno and pure electro.

A gorgeous set with LED panels creating a curtain that opens and closes with the demands of the staging, giving rise to remarkable effects of three-dimensional movement.

He agrees to give us a brief interview before going onstage in a black shirt with white polka dots and his extraordinary electric hair, a pop-punk just a jump away from his latest album Electronica 2: The Heart of Noise (a homage to Russolo and the Art of Noises), a pack of collaborations, from the Pet Shop Boys to Laurie Anderson, Hans Zimmer, Cindy Lauper, Primal Scream, Sebastien Tellier, Gesaffelstein, …

A 68-year-old with the energy of a teenager. And it’s this – the music – that allows him to do it. 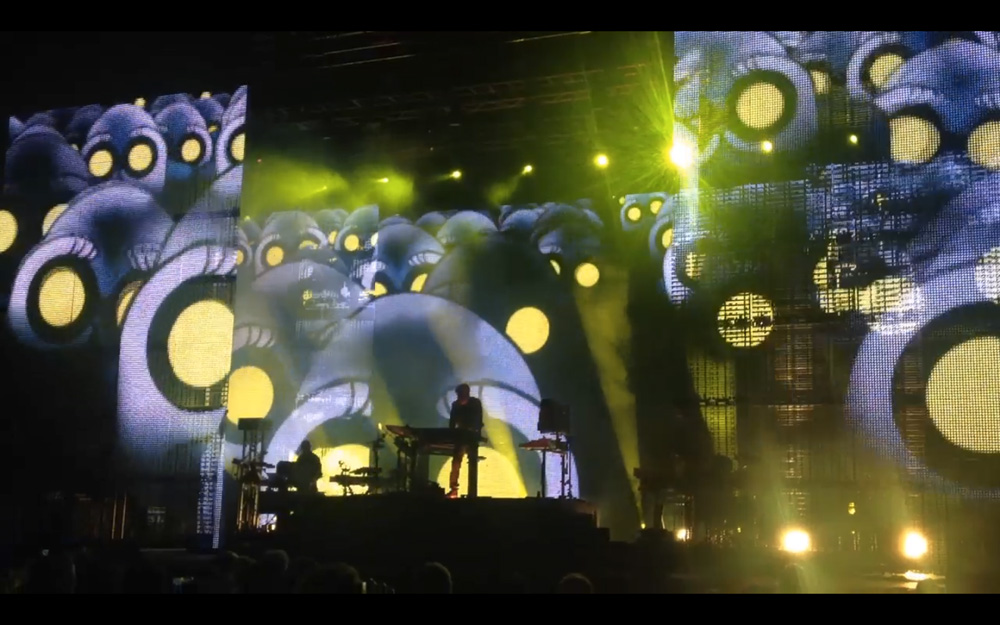 There are four of us journalists asking him various questions: “How do you see electronic music in 40 years’ time?”, “How did you manage to create a bridge between pop music and traditional, hard-core, practically tuneless electronic music (Klaus Schulze or Tangerine Dream, for instance)?”, “What role has image played in your work?” (and imagination too, I’d say), “What is your relationship with Edward Snowden, and how can we save ourselves from a global surveillance that’s threatening to become paranoia?”.

He replies in the rapid free flow of a man who has very little time and very clear ideas.

“Collaboration between musicians is important, as is physical contact between composers, sound engineers and other creatives, particularly with artificial intelligence, because of its capacity to produce another kind of music, another kind of painting, other images”. For the future he expresses his belief and curiosity in the relationship between the artistry of humans and the creativity of machines.

“The thing about being a bridge between pop and electronic: what I did is evidence of my obsession with experimentation [he was a pupil of Pierre Schaeffer, ed.] and the love I have always held for melody, the essence of music. Electronic music is totally different from classical music, which is based on notes and the orchestra; it’s working on the textures of sound, on the endless possibilities for shaping sound; it’s a way of creating sound, exploring it in a new and profound way. And I chose pop as a return to an underlying melody”.

The knowledge that he began his musical career thinking of Pierre Soulages and his painted layerings helps us to understand the layering in his music: “I think of music in a very visual way, with flexible digital stratifications, and a continuing love of Malevich and his sense of measure”. 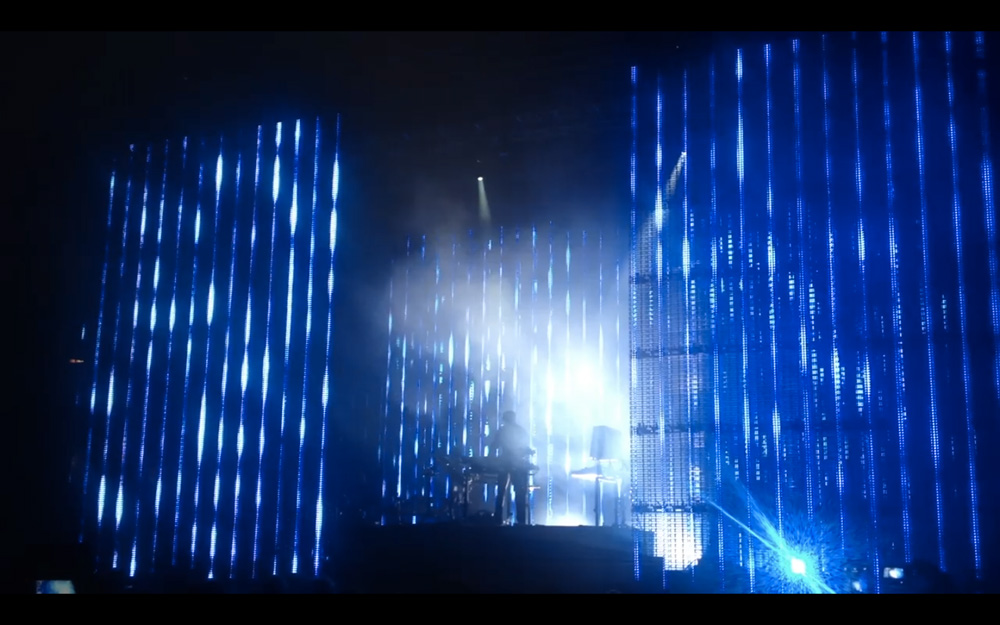 He addresses his questions and – perhaps – concerns about the lack of anonymity and privacy and the endangerment of online security thus: “The risk lies in the abuse of technology. We are the ones who must develop our awareness of the medium. Only a conscientious use of the medium can save us from the paranoia of surveillance”. The fact is that the abuse can be reduced, marginally, but the secret intelligence agencies’ use of our personal data remains unchecked. In Jarre’s video Exit, in fact, Edward Snowden, the American IT expert and former CIA agent denounced in 2013 for having publicly revealed information about various secret NSA intelligence programmes, wonders why all private data has to end up online, archived in personal devices, and freedom of speech thus invalidated. This is what he attempted to say, and the result was years under arrest. 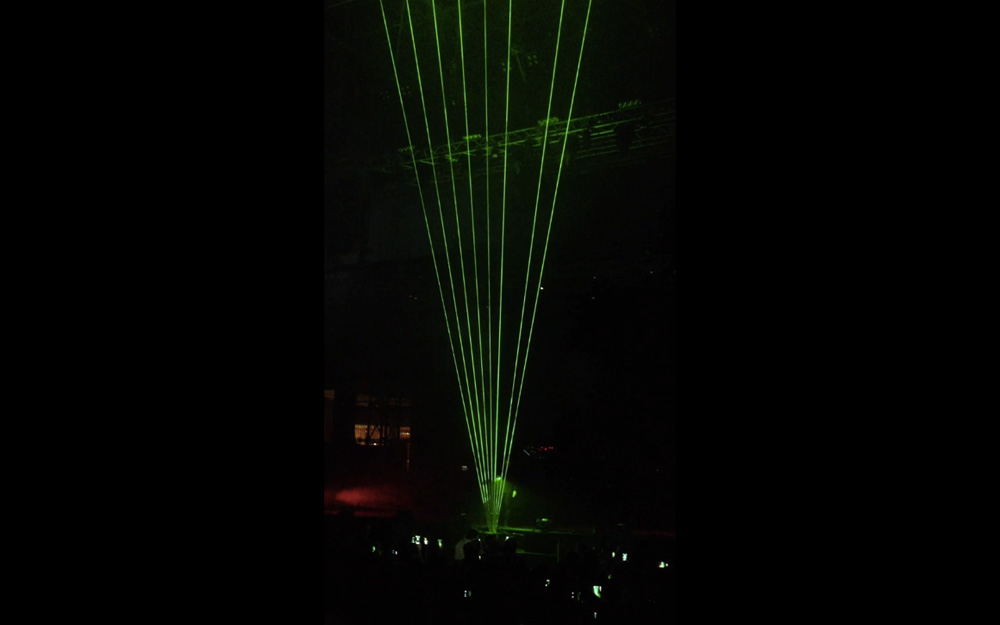 The time available for the interview is too short, and leaves us with the desire to talk more, push the conversation a little further. Beyond the time limit.

The concert begins at 9,30 pm on Saturday 9th June 2016, with the epic notes of The Heart of Noise parts 1 and 2, in a shower of red and blue lights. Delicate sounds and compulsive rhythms, percussive beats to accompany an underlying minimalism.

The visuals become more animated and the sound more electric with Automatic. Beams of light become a multicoloured rationalist architecture.

Then comes the dedication to Edward Snowden and Exit begins: Snowden’s face is overlaid with alphanumeric codes and characters in an uncontrollable flood of data. Pure techno. The voice of the US computer expert is impeccable American, recorded in Moscow in April 2016, a few days after the release of the album.

Now it’s time for the stylised figuration of Brick England and the arrival onstage of the Pet Shop Boys. Pop reinterpreted from a more nostalgic angle.

No Jean Michel Jarre concert can be complete without Equinoxe, with its blue and yellow penguin-like figures invading the stage.

When the moment comes to play the laser harp, he invites us to hope there will not be too many problems with it; then, his white gloves on, he plays the lasers as if they were strings, right in the middle of the stage; we are abandoned to a Gothic Time Machine.

I have always admired JMJ for his ability to cut across current events in music, to permeate different points in space, to conceive, in short, his own existence in a different point of our spatial and temporal localisation. To be interested in the Earth, as well as magnetic fields and the solar system. 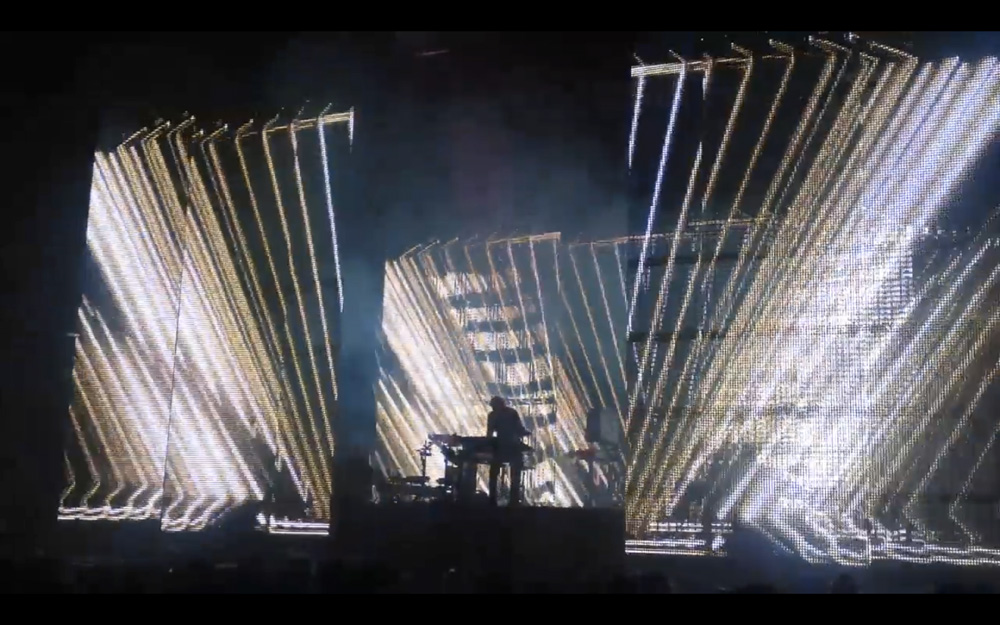 Waiting for Cousteau (9th album, 1990) is one of the albums I am fondest of. It brings together the figure of film director and oceanographer Jacques-Yves Cousteau, with his political and environmental commitment[1] and his alarm about the two principal sources of life – water and air – trashed by humans, and a homage to one of his favourite playwrights, Samuel Beckett, whose Waiting for Godot is re-hashed in the title. This Godot/Cousteau is the man conscious of his surroundings and the actions he needs to take to prevent environmental disaster.

Zoolook (6th album, 1984) is a declaration of love for multiculturalism. It contains an arrangement of sampled voices in 30 different languages (Aboriginal languages, Arabic, Chinese, Inuit languages, French, Japanese, Indian, English, Malay, Malagasy, Dutch, Pashto, Pygmy languages, Polish, Quechua, Russian, Sioux, Spanish, Swedish, German, Tibetan, Turkish and Hungarian) and, in these times of endemic racist tension, this an album we should be listening to and reconsidering. The wonder of 30 diverse languages which come together to make one, concrete music that becomes funk and new wave with afro-oriental influences.

The show closes with Stardust. And the cycle closes, with thoughts of the stars and their – and our – infinite nature.

images (all) Jean Michel Jarre, images taken by Elena Giulia Abbiatici live during the concert in Rome within the Just Music Festival

[1] The Bill of Rights for Future Generations was proposed by Jacques-Yves Cousteau and his society in conjunction with UNESCO, and approved by the latter in 1991; to date more than 100 countries have signed up to it. The Cousteau Reserve, a protected marine area in Guadeloupe, is also named after him.