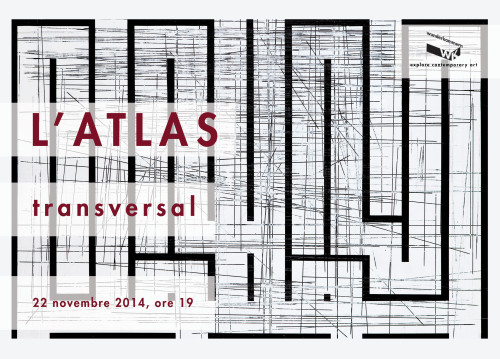 L’Atlas (1978, lives and works in Paris) will be now in Rome, presented by the gallery Wunderkammern. One of the most internationally recognized figures of Urban Art, he began his journey in the 90s through graffiti, taking the name of the Greek titan Atlas to reflect his global dimension. After spending an extended period between Morocco, Egypt and Syria where he studied with masters of all types of calligraphy, he came to create his own personal typography, which – thanks to the combination of many influences and cultures – aspires to become a universal script. The artist’s references span from archaeology to geography, from astronomy to Greek mythology, from Eastern philosophy to urban architecture. L’Atlas favors geometric abstraction, with direct references to Kinetic Art, Land Art and Optical Art. His typographic, almost abstract pieces create labyrinths and compasses that stand out in public spaces, at times the result of collective performances.

The exhibition «transversally» highlights the artist’s production, from his pieces that focus on reworked calligraphies to his newer works, where the handwriting is either barely visible or completely disappears to the point of geometric abstraction. In L’Atlas’s works the signs, planes, diagonals, transversal lines, and points of intersection give shape to a graphic representation of the universe; a universe that, today, is infinite and immeasurable. This abstract depiction, composed of formulas and numbers, interprets mathematical foundations in a visual light. In this sense, the works of L’Atlas indulge man’s constant need to attach a visual image to what is infinite.

The artist will create a new series of works specifically for Transversal on glass and wood. At the exhibition prints and artworks in acrylic, aerosol and lacquer, on both canvas and wood, will also be presented. Before the opening, L’Atlas will create an outdoor installation in Rome. (from the press release)

If on an Autumn’s night (at Manifesta) a Traveler

If on an Autumn's night (at Manifesta) a Traveler