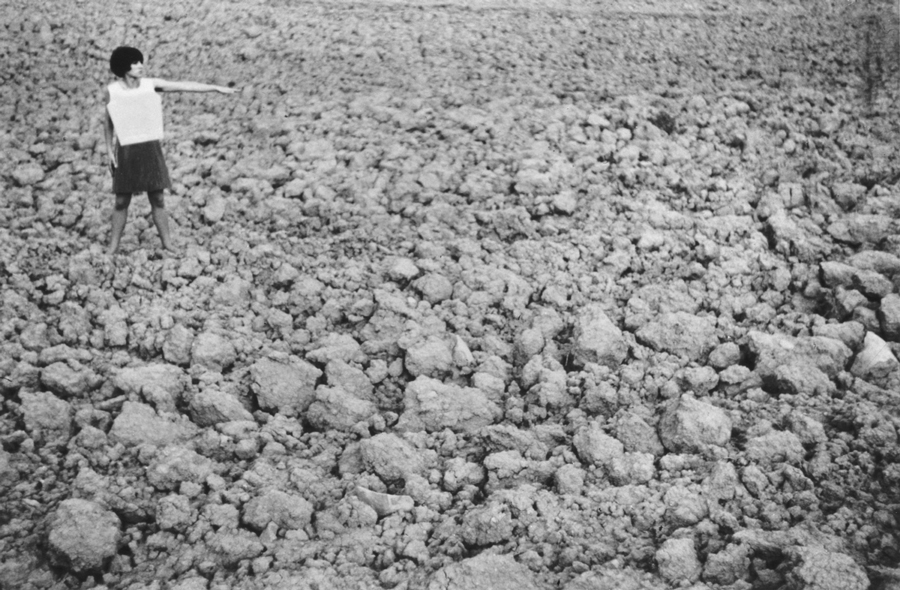 «Ambienti proiettivi animati, 1964-1984 [Animated projected environments, 1964-1984]» is an exhibition that retraces twenty years of the career of Luca Maria Patella, an artist who acted as a reference point along the horizon of the neo-avant garde movement during the 1950s and 60s and a considered a pioneer for having explored the potential of film applied to video-art and (above all) for having experimented with a combination of idioms with the support of various mediums. The exhibition is being hosted at Rome’s MACRO museum and gets its title from Patella’s first solo exhibit held in Rome in 1968 at Fabio Sargentini’s Attico Gallery.

The show is divided into «environments», each of which explores a specific aspect of the artist’s work. The first hall is dedicated to «photographic canvases» in direct dialogue with the short film Terra Animata (Animated Earth) directed by Patella in 1967. Filmed in 16 mm, the projection is a conceptual documentary that has the two young protagonists (and the artist himself) carrying out repetitive actions and edited in stop motion. The sporadic use of colour on some of the objects recalls the «psychic colour» theory. The characters move around and relate to one another outdoors and «measure the earth», opening a dialogue between film experimentation, performance and the achievement of the newborn Land art. Patella is a free experimenter and his works are ensemble due to the plurality of artistic casts he adopts: The young woman wearing the «reflecting dress» in Terra Animata could just as easily go back to the canvas, be portrayed as a sculpture or be crystallized in photographic time. Above all, it is the fundamental idiom for artistic research. Observing the Dice A (1966) canvas means mentally dubbing the filming of the gesture, the instant in which the sound, word and image all come together.

In a new environment the words themselves are given body, light and shape with the Voulez-vous une Aubelière? installation. The walls of a small room that is dark and empty are the screens for the projection of a sentence from the 16th century classic by Rabelais Gargantua and Pantagruel, a source of inspiration for Patella due to its expressive, aggressive and vivid use of word. Words are linked to architecture, invading physical space and their very presence is a synaesthetic experience. 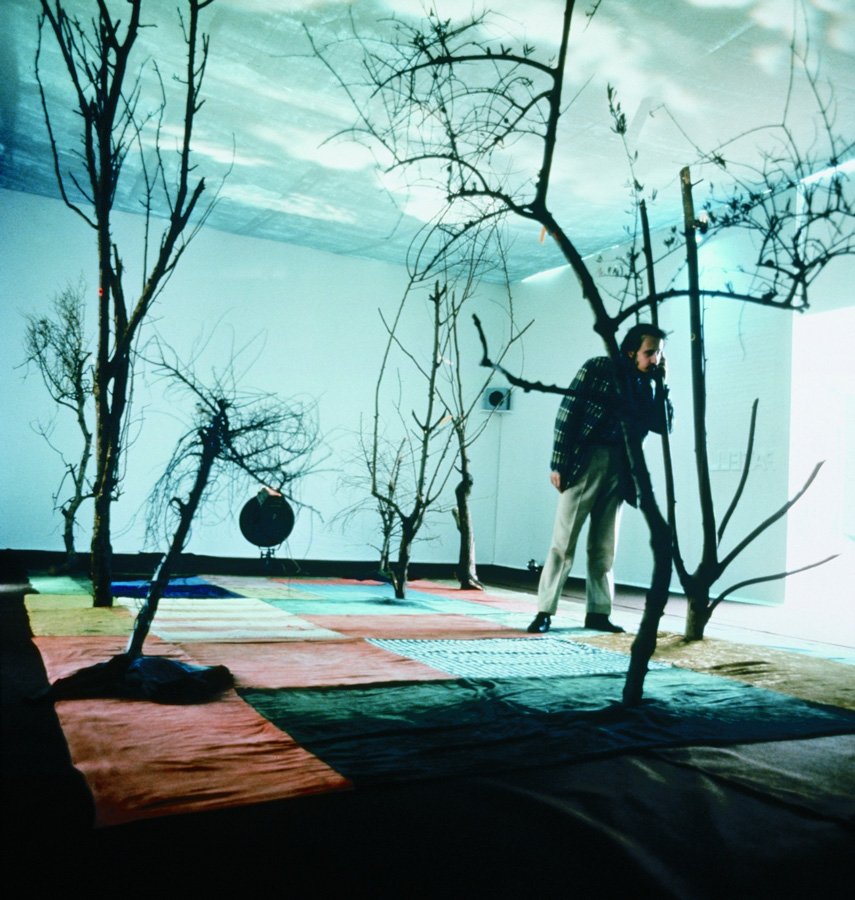 This is once again celebrated in the hall presenting Alberi parlanti [Talking trees], a work presented for the second time in 1971. The actors stomp on a floor covered with colourful fabrics under the blue sky projected onto a ceiling and take us through an enchanted forest to listen to the trees animating it. We put our ear the colourful holes in the trees’ branches to hear poems, dialogues and sounds of the real woods. The effect is very poetic and evocative. The next hall is dedicated to some of the 17 works that make up the Mysterium Coniunctionis (1982-84), a mythological-cosmic complex that feature the great Stellar Cupolas and Celestial Roses, reconstructions of late 17th century myth-celestial and astronomic representations. A voyage to the edge of archetypes, alchemy and psychology. Lastly, the 1976 work Id e Azione [Id and Action], the symbol of the hammer and sickle closes the exhibition in the form of a wall installation: the political icon on such a large scale suggests an ulterior dimension of the language between the Id (the profound) and the action (sociality). The combination of different mediums has generated a complex conceptual exchange filled with references devoted to plat, philosophical speculation, poetic expression, observance of the environment and an incessant unfolding of inner impulses towards the external universe of sensitivity.