Luca Vitone at the MoRE Museum

MoRE, a Museum of refused and unrealised art projects launches a virtual exhibition which, for the first time, is curated by an artist: Luca Vitone.

Over the last few years this path has been followed by many museums. In this case, the choice of entrusting the curation of an exhibition to an artist has been given to a Genoese artist, born in 1964, who has lived in Berlin for many years. Following the solo exhibition When public remains private. Unrealised projects by Luca Vitone, curated by Elisabetta Modena, for this current event Vitone has invited six artists, each presenting an unrealised project: Mark Dion, Maria Eichhorn, Till Krause, Daniel Maier-Reimer, Veit Stratmann and Cesare Viel.

The choice of artists, called upon to personally curate the labelling of their own projects, follows criteria based on intellectual harmony and artistic research, as well as friendship.

As Vitone explains in the written introduction to the exhibition: “This work demonstrates an act that is fundamental for an artist: thinking of a work beyond its creation. It is not necessary for the work to be realised, the important thing is to imagine it and give it definite form through a project, because this is the everyday exercise that artists must perform to activate their own procedures, useful in the realisation of finished works”. 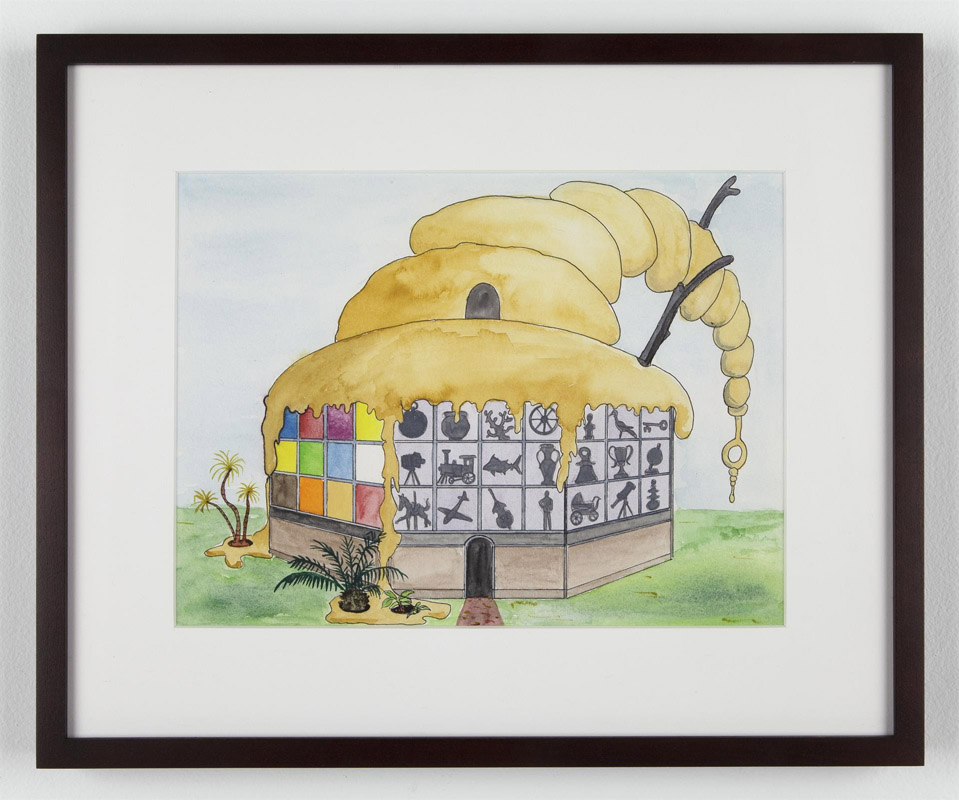 Mark Dion (New Bedford, Massachusetts – USA,1961) presents a project put forward for the celebrations of the centenary of the 1915 exhibition Panama-California Exposition for the Balboa Park in San Diego. The American artist intended to build an information centre for park visitors, gathering and presenting the activities of several cultural institutions. The project (2012), which was not accepted by the commission responsible, is introduced through 5 drawings made with coloured pencils and shows a hexagonal pavilion with an elaborate roof whose strongly iconic structure brings to mind the cell structure in a hive and the honey it produces.

Maria Eichhorn (Bamberg, Germany, 1962), instead, presents a project which sets out to build an observation tower, 33 meters tall, as an iron building to be situated on the highest location in a landscape (1992-1994). The tower would have been open to the public at all times. The reasons why this work never saw the light of day are not explained. 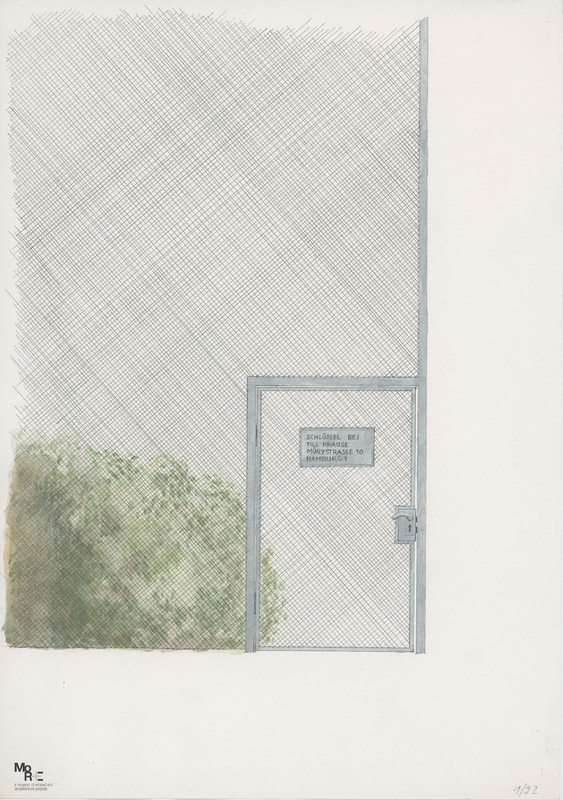 In The Square Opposite the Townhouse (1987-1995) the German artist Till Krause (Hamburg, Germany 1965) wanted to maintain an entire empty space intact – a decommissioned area in the centre of Hamburg – containing the last traces of the effects of the Second World War on the city. For this “square” in the city’s business centre, Krause planned two projects which were nor accepted: one idea was to fence this space and leave it untouched and the second was to construct a panoramic building in which to organise an archive on the history of the location.

Daniel Maier-Reimer (Hechingen, Germany, 1968) – an artist known for creating journeys whose presentation is then delegated to another artist – offers Journey from the Yellow Sea to the Sea of Japan (2015), a voyage across the sea that the Korean Museum MMCA (National Museum of Modern and Contemporary Art) decided not to produce, here described by Till Krause on the working label. 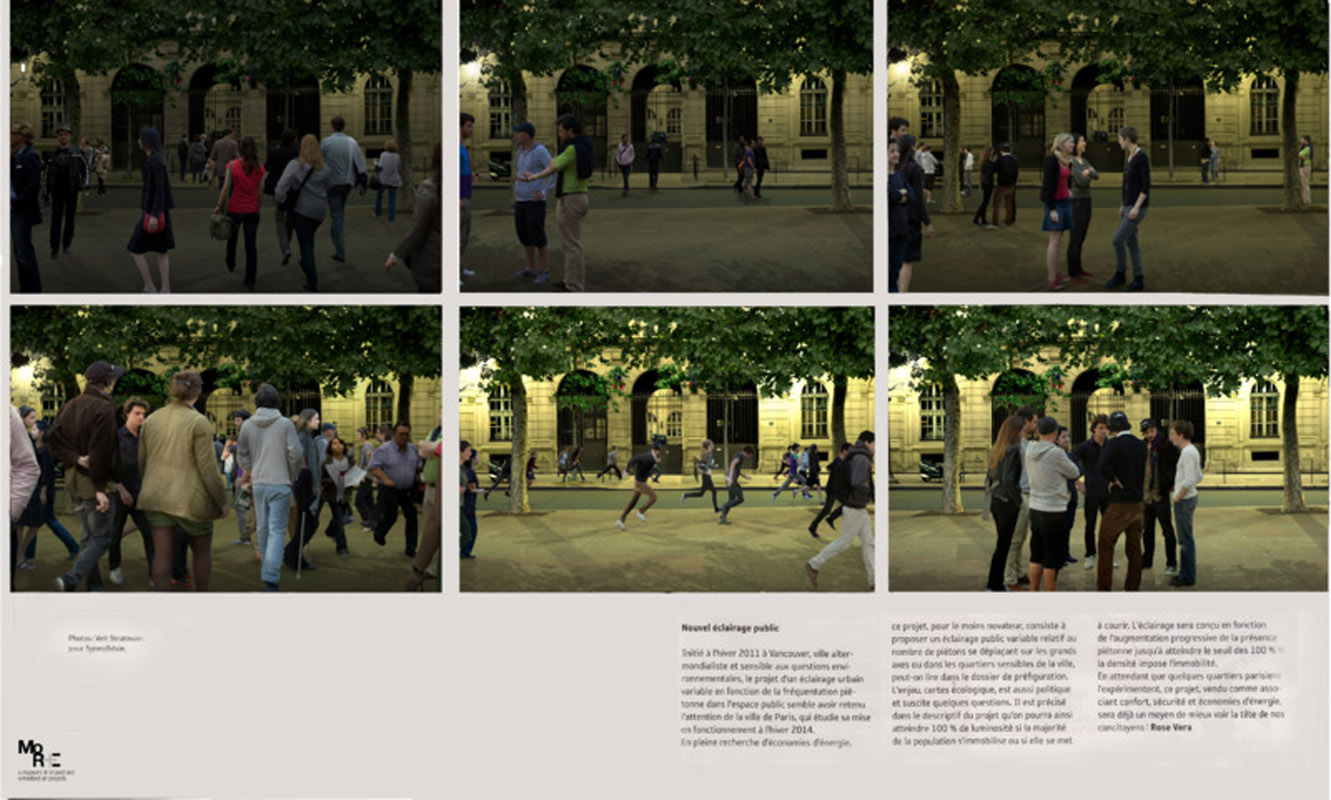 Veit Stratmann (Bochum, Germany, 1960) presents A lighting system (2012), a work “designed never to be realised”, consisting of a system of urban lightening based on the behaviour of people. This work would have connected the debate on security with the production of a good conscience.

Finally, Cesare Viel (Chivasso, Turin, 1964) presents Tutto ciò che accade (Everything that happens, 2011), a project in which two sentences (“Everything that happens” and “Always all around”) were to be transformed into two banners driven by two tourist flights, simultaneously resulting in an aerial performance and an ephemeral environmental installation. The project, which was not commissioned for economic reasons, is described on the site through an image and the artist’s words.

MoRE. a Museum of refused and unrealised art projects is a digital museum that gathers, preserves and exhibits unrealised online projects by artists from the twentieth and twenty-first century. The museum, accessible via the website collects and exhibits projects that were not realised for technical, logistic, ideological, economic, moral or ethical reasons, or that were simply too utopian or impossible to create, specially designed for specific occasions and contexts, but not necessarily commissioned.

The museum’s aim is to value and preserve projects that were never realised by collecting documents and materials, as well as the information card written by the curator. Through research, articles, seminars and MoRE publications the museum also wants to study these preserved projects, taking full advantage of the web’s potential.

More, a museum of refused and unrealised art project