The next edition of “Maker Faire Rome – The European Edition” welcomes a new section: MakerArt, a project curated by Valentino Catricalà dedicated to the relationship between contemporary art and new technology by creating the opportunities for synergies and connections between “makers” and selected international artists.

The aim is to create a special exhibition as part of the event where interactive installations will attract and involve visitors, representing the many different ways in which the culture of technological innovation can be interpreted.

Alongside large installations on artificial intelligence, robotics, sound art and video art, the special section will also include “pop up art”, or happenings, capable of continuously “unsettling” visitors during their visit. Artists are given the opportunity, for the first time in Italy, to collaborate with tech companies, thus achieving a true union between art, science and technological innovation. 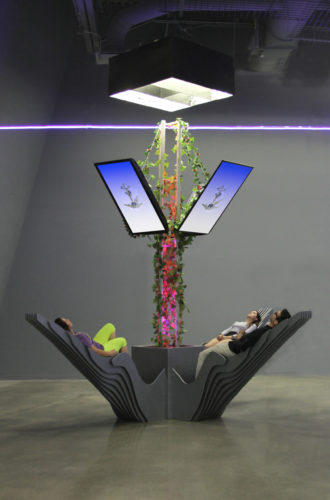 Globally known artists will be present, including the Canadian Bill Vorn, one of the major figures working in Robotic Art, with his “Copacabana”, a robot dance; Patrick Tresset (France) who uses small robot hugs to create continuously changing portraits of visitors; Mattia Casalegno, a video artist, originally from Naples, but who has always lived in New York and who curates the no profit exhibition space Room Service, dedicated to site-specific projects and new media (see photo); Cod.Act, an internationally famous French collective, who are presenting πTon, a gigantic sound spiral; and Joaquin Fargas, a world-known Argentinian artist, who combines art, science and technology in his diverse art production. Fargas’ work is based not only on utopian concepts, but also features feasible projects linked to universal themes such as human life, environmental protection and social relations, stimulating questions and reflections with his artistic creations which, in a simple and informal way, concern each one of us and the world that surrounds us. The event is organised by Rome City Chamber of Commerce.

“Maker Faire Rome”, explains Lorenzo Tagliavanti, President of Rome City Chamber of Commerce, “is an established platform, a place where science meets grassroots innovation and where training, networking and business can also take place. It represents, therefore, an accelerator for the innovation process occurring all over Europe. The event is developing thanks to the co-creation work which is being undertaken continuously with businesses, professionals and the many supporting institutions. The novel aspect of MakerArt is acting as witness to the ways contemporary art increasingly engages with science and technology, experimenting with new form and content. It is no coincidence”, concludes Tagliavanti, “that there are an increasing number of European programmes promoting innovation in industries and SMEs through an engagement with the arts”.