María José Arjona, «…But I am the tiger»

by Eugenio Viola
in focus 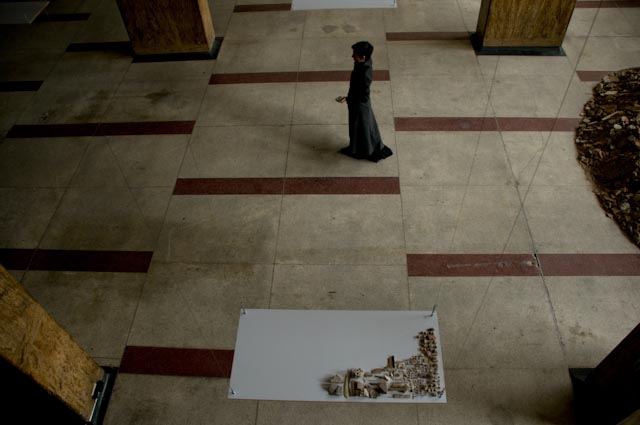 This quotation, taken by Jorge Luis Borges’ A New Refutation of Time (1944-46) is the starting point for the new site specific performance of María José Arjona, enabling her to create an intriguing short-cut: time is a central issue in Borges poetics as well as in Arjona’s work, mainly focused on performance, which is par excellence a time-based form of artistic expression.

Time, consciousness, and existence are always crucial in the work of María José Arjona, who undoubtedly became, in the last years, one of the most interesting performance artist in the magmatic Latin American panorama. In her work the body has always a central place, it is a powerful element of visual communication, energy exchange and a generator of different meanings.

In Arjona’s research, the body interacts with space to create an experience, which bypasses corporeality with cognitive responses. The observer becomes the catalyst of a sensorial exchange, beyond the fluid borders situated between identity and representation. Her performative act is always based on a long time approach, by which the body becomes an agent for understanding the space-time coordinates, and to address process, memory and power.

The artist, deeply engaged with her practice, adopts strategies of resistance, investigating the government of self and others, the individual’s relation to the group and the norms leading relations between the physical and the social body. Arjona conceives art as a tool of transformation; she offers an urgent response to imposed political discourses by creating an energy based structure, anchored in the body and it’s capacity for empathy with the other.

María José Arjona will perform …But I am the tiger every day for one month. The piece, conceived as a long durational work becomes the object to investigate time, not in terms of endurance, but rather considering it as a tangible dimension: a matter of presence in the present time, and in a certain place. The Colombian artist through a series of repetitive, minimal acts will play with the idea of inhabiting the time and the space. She will create a situation of extended duration, to strain the relationship between artist, the viewer and the architectural space[1].

[1] The text here proposed by Eugenio Viola was written on the occasion of the long-term performance  «… But I am the tiger» by María José Arjona, perfoming in Bogotà from 27 October to 22 November 2013. It is the third time that Eugenio Viola works with Maria José Arjona, after the series of performance «Vires. Exercises on Power» presented at the Madre Museum in Naples on the occasion of the exhibition «Corpus. Art in Action», and «All the others in Me», performance achieved at the Riad Dar Chérifa as a collateral event of the Fourth Biennial in Marrakech (2012), whose video was in the same year acquired by the Rivoli Castle…