In the exhibition Splendore Neolitico (Neolithic Wonders), curated by Anna Cestelli Guidi, the Roman artist Matteo Nasini celebrated the ancient times when music was invented by human beings. The exhibition enabled primordial harmonies to emerge, creating a bridge between the music of our ancestors and the synthesised sound of experimental contemporary music.

The first room introduced the prehistoric space of Nasini’s universe with a tapestry similar to the figurative iconography of cave paintings. The natural landscape made of woollen threads in Principio Selvatico (Wild Origin) hints at the origins of an unspoilt, dynamic and essential nature. The volcanoes, trees and flowers which inhabit the work evoke a period in the history of humanity when nature and mysticism were paramount. 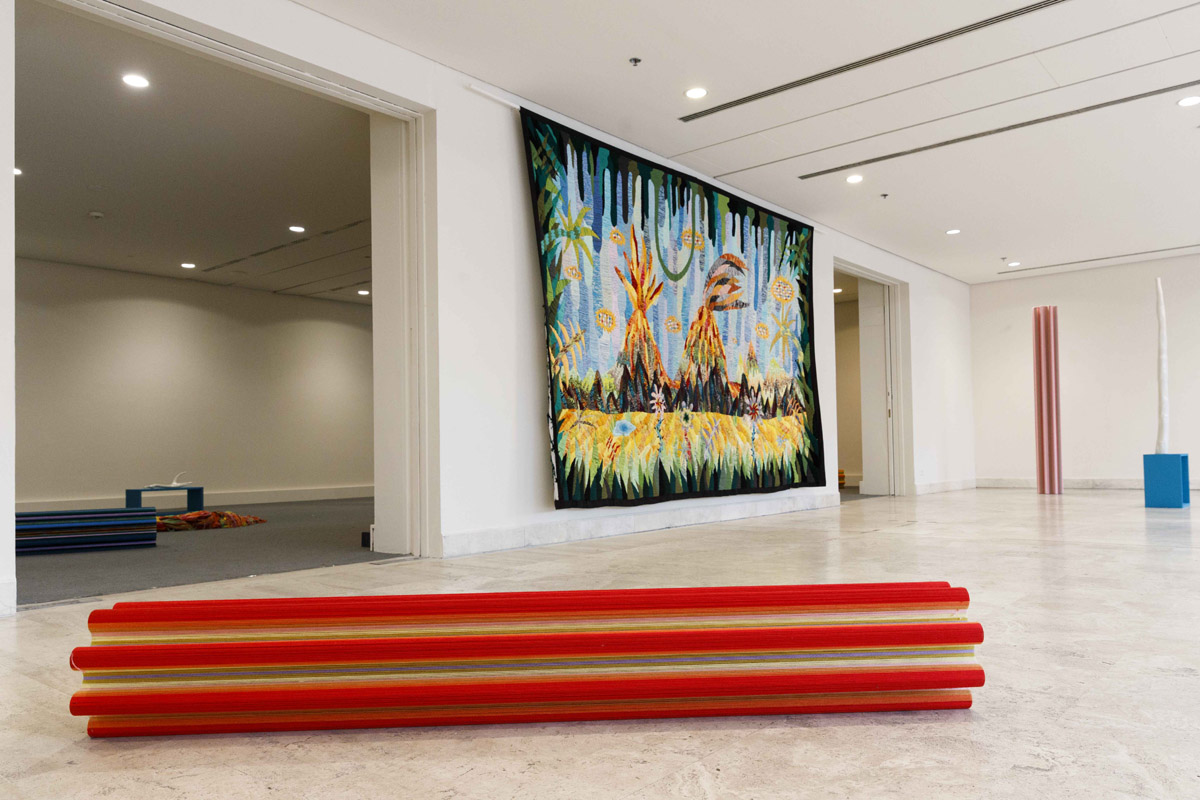 The environmental installation in the second room was suggestive of an archaic and surreal dimension. In order to bring Splendore Neolitico to life, Nasini carried out an archaeological research on sound in collaboration with the Museum of Natural History in Verona, where he selected fossilised bones dating back to the Neolithic period, transforming these into wind instruments. Taking inspiration from the first musicians who, over the course of the Palaeolithic age, drilled holes in horns, bones and shells to modulate melodic sounds, the artist reproduces these artefacts in white ceramic using a 3D printing process. These sound sculptures, made with the assistance of technology, were brought to life in a live performance during the opening. The concert was recorded and reproduced on a loop during the exhibition, like a hypnotic soundtrack  that brought back the soul of the past through the breath of the present. 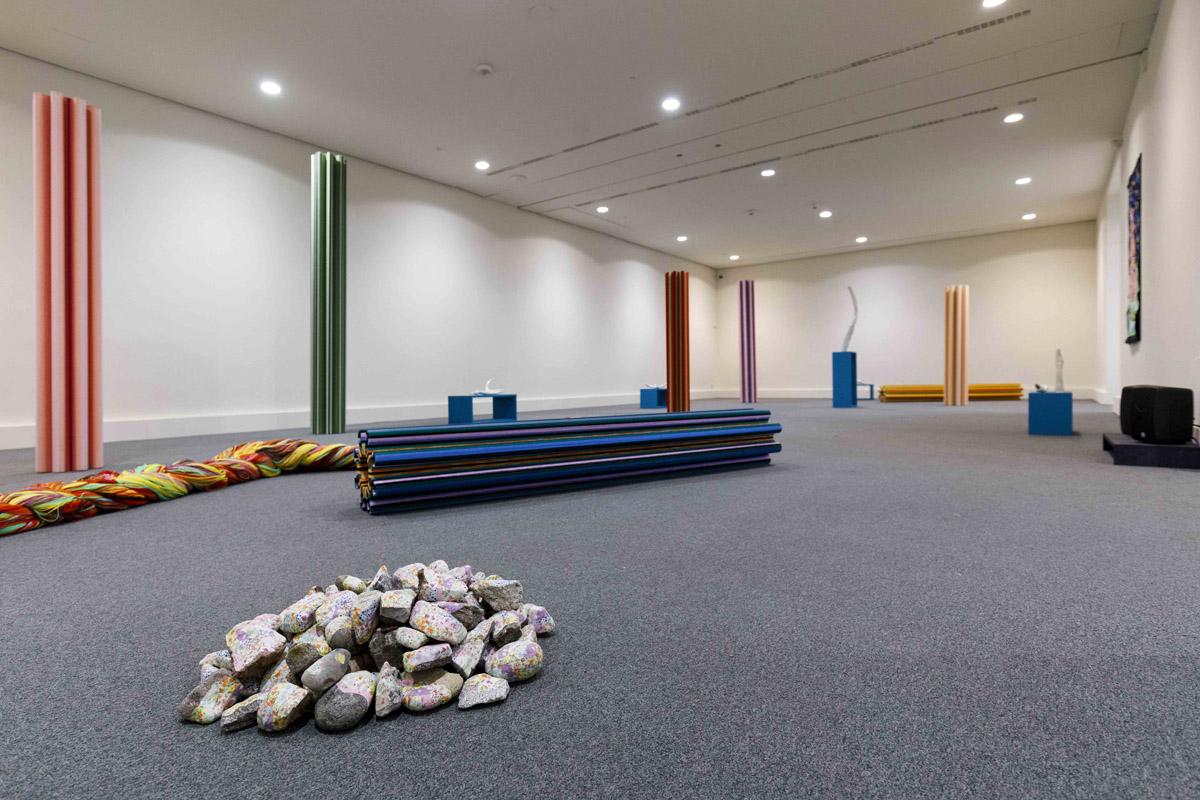 The melody composed by Nasini is inspired by the language of sound used in the shamanic and animistic practices of the inventors of music who, forty thousand years ago, discovered the magic of acoustic resonance. Splendore Neolitico stages that crucial moment in which Homo Sapiens Sapiens entered the symbolic phase of his evolution and began to use images and sound to communicate with nature and the divine. In religious rituals, celebrations,

present and past, everyday life, music creates symbiosis and ecstasy; it transcends the I and exalts the Us. Nasini, artist and composer, graduated in double-bass at the Conservatorio di Santa Cecilia in 2002. His musical background most likely contributed to his knowledge of the communal potential of music, which the anthropologist Paolo Apolito called the “rhythmic force.” According to Apolito, rhythm has a magnetic force able to generate rhythmic communities which create connections between people based on harmony and sharing (Paolo Apolito, Ritmi di Festa, 2014). 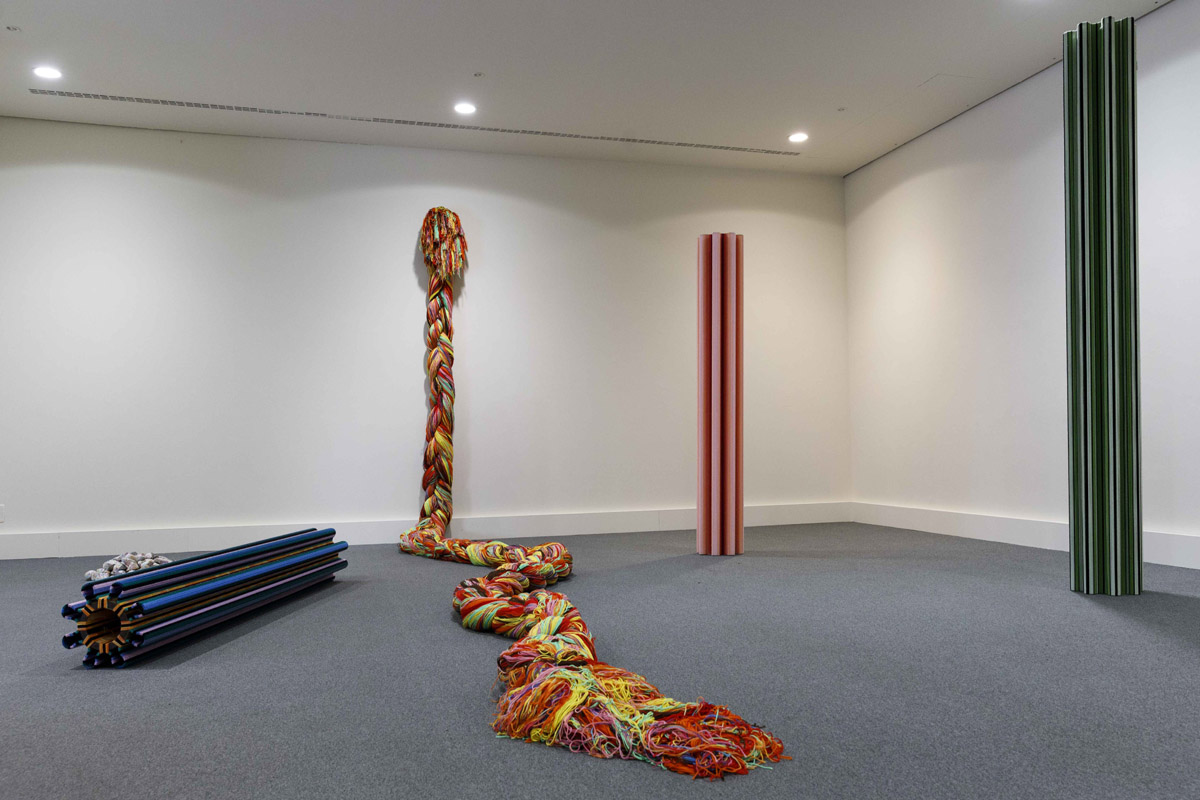 In this visual- and sound-scape, the spectator became the protagonist of a reflective journey beginning at the dawn of history. The physical space of the place appeared to mirror the activities of archaeologists who, in the same way as craftsmen weave the threads of the past, reconstruct fallen buildings and rework extinct melodies. A long and colourful braid, woollen columns in the shape of flowers, ceramic bones and a pile of stones covered with cloth are all elements that constituted this journey into the heritage of an imaginary past, elevated by the artist into a hymn for humanity.

Nasini restores colour and sound to a world we know only through colourless and silent traces. His utopian vision of prehistoric times becomes a metaphor for a primordial humanity which is, in its essence, rhythmic.