by Elena Giulia Abbiatici
in Events, focus
«I have come to the conclusion that correlation is what prevails in this world:
sound is connected to vision and vision cannot exist without sound.
everything that human beings do is connected:
visual and acoustic phenomena are complementary»
Milan Grygar

A multi-shaped aesthetic experience lasting four days at Villa Medici where the Mannerist frame is combined with rhythm and images that made reference to sound. Multi-sensory. Once again, for the 5th edition of the Villa Aperta Festival organized by Rome’s French Academy. A fusion of art, calculations and performance, typical of Baroque Rome, a living source for the idiom of the state of being contemporary.

Received by the marble spiral staircase, one proceeds through the loggia and onto an immense court yard surrounded by and embellished with pine trees that have stood there for centuries, the custodians of the magic and charm of the events taking place indoors. A panoramic view of the city that should be accredited as one of the most intense and immersive that Rome has to offer. Lights and shadows have given way to sound – rock music, post punk, psychedelic blues, pop and techno in its purest state.

The pine trees were there to observe and listen to everything, including us guests who were taking in the scene while dancing and enjoying a drink. It was wonderful to look up and see the dance of the muses engraved on some of the Ammannati bas-reliefs on the façade. Among the groups to point out. The Parisian rock group That Summer, led by David Sanson (a recent Villa Medici scholarship owner), opened the festival with a pretty raw style of rock, free of any undertones and ravelling. Introspective, and worth listening to. Cheveu, currently one of France’s most remarkable bands, offered post punk charged with energy. Power and independence articulated by post-industrial and post-garage sounds. (http://shop.bornbadrecords.net/track/slap-and-shot)

The most outstanding:  Jackson & his Computer Band, pseudonym for Parisian artist IDM Jackson Fourgeaud, one of the inventors of the French touch who performed on Friday the 20th. A refracted and dim set up: a shell of shiny monitors and clouds of smoke. Jackson was at the centre of his computer band made up of customized mixers, one of which was even made from a typewriter. He was surrounded by a fog that enveloped the entire room. It felt like November in June. Electro-madness directed by a puppeteer moving his marionettes, assisted by a kind of mechanical arm that was raised from time to time, reminiscent of the image of an ancient gladiator. The performance closed with a Losting in Vanity, the vanity he was trying to approach with all that smoke. Lights, fog, motion, applause. Circle.

Connan Mockasin, a New Zealander with a super-bleached page boy hair cut, also took the stage on Friday night accompanied by his band with an atypical and visionary look. The most extraordinary presence was seen at the keyboards: a kind of contemporary vestal with long red hair and an Arab headdress. An instrumental exhibition for the most part that started off with Do I make you feel Shy? followed by pieces from their latest album Caramel and concluded with the piece everyone was waiting for: Forever Dolphin in Love . A low voice, practically a whisper, and mellow music, hypnotic in its evanescent soul-blues-pop rhythms. A style that quietly seduces. Dream.

The electronic rock of three gorgeous women –  Au Revoir Simone – at the keyboards had us dancing with their colourful, sparkling style. Catchy melodies that the ear enjoys. DanceFloor.

The highpoint of the four evenings was Gesaffelstein, Mike Levy’s stage name, who livened up the final hours at Villa Aperta at 2:00 a.m. 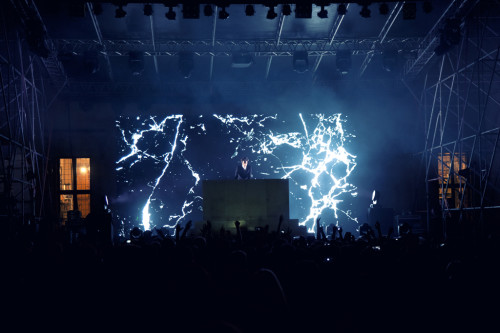 A golden cube from which a pretty dark techno was played accompanied by images in motion that ranged from abstract to figurative with Baroque-style buildings and cosmic images. I saw a red-hot crowd that got its heat from DJ sets by The Hacker and Brodinski and their super-tense techno. Charisma and adrenalin. The first Saturday night of this summer wound up like this – suspended in amazing rhythm at 3:30 a.m.