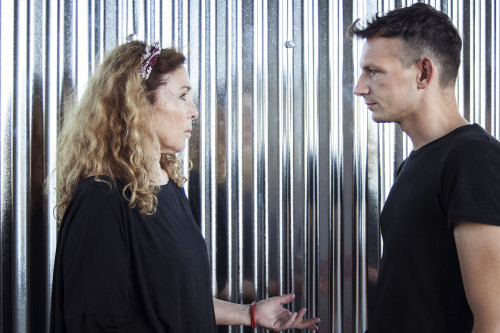 The ancient Guevara Tower in Ischia has been converted into an enormous multi-media device thanks to installations by Marisa Albanese and Roberto Marchese, giving rise to an intense dialogue between the interior and exterior, between introspection and exploration of human and urban landscapes.

The project curated by Michela Casavola and sponsored by the Municipality of Ischia and the Madre Museum, unites two artists coming from different backgrounds and generations as they come together on the abstract level of artistic research, harmonizing analogical and digital idioms to spotlight the characteristically socio-anthropological complexity of the present. Exposition is the origin, the point at which the two axes, the two quests meet: Albanese presents a vertical, more intimate view while Marchese’s is horizontal and spatial. This is a place in which the tension between oneself and others or between humans and nature becomes tangible, an arranged alliance of artistic practices composed of cumbersome absences and thunderous silence.

Marisa Albanese reflects upon the concept of mobility, touching the dynamics of voyage interpreted as physical and mental motion: she draws ideal maps, the Diariogrammi, in which empathic processes  are configured along with the alternation of sensations and energy with which the artist immerses herself during her changes of position. These are «automatic» drawings that give shape to a personal geography of the world, forms that can only be defined through the eyes of those observing them. Everything is in motion in works by Albanese. Achille Bonito Oliva affirms: »Heraclitus’ Panta rhei finds its reception in creation, through the aphorism of the flow that accepts all and rejects none». The same creative stream makes up Hp/, a printed work along the margin of stacks of paper that recalls the ancient technique of fore-edge painting with which precious images in the front cut of books was «concealed». Far from hiding, this artist makes the figures emerge from the sheets of paper. The figures symbolize worldwide integration, the phenomenon of human and social transformation in which nomadic identities are dissolved and lost in undefined territories. 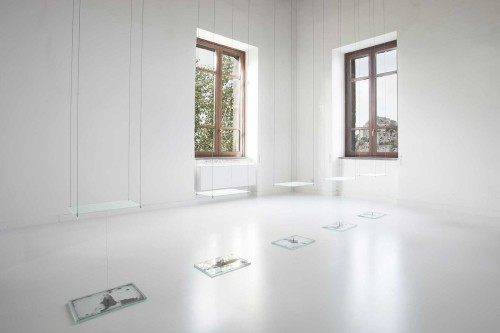 The concept of dynamism is reprised in the interactive installation Cosa ferma le alkaline?  [What halts the swings?] in which a magnet was placed under the seats of five wooden swings like Foucault’s pendulum that moves and displaces iron dust to mark infinite courses, that draws unexpected figures in evolution, images of a liquid society in continuous progression.

The constant tension between motion and stasis is revealed in Il Progetto [The Plan], a work in which Albanese builds an oxymoron: an upside-down chair on a table (both of which are completely white) seem to signal a pause and evoke a human presence among the piles of crumpled papers, symbolic of vanished plans and thoughts. A gridlock in contrast with the etymology of the word itself (from the Latin projectus: pro-ject) that preserves a concept of motion instead.

Can the perpetual repositioning of contemporary society, the «new nomadism», make it possible for us to truly achieve new awareness and to know ourselves and others better? Mare chiuso [Closed Sea] is the site-specific installation by Marisa Albanese which reflects upon the human potential of understanding in which salt (symbol of knowledge) fills an entire room in the Tower. A mechanical arm, an ideal of the extension of oneself, ceaselessly draws an approximate circle, an ephemeral perimeter that marks the boundaries with «others», an incoherent line determined only by the will of each one of us. 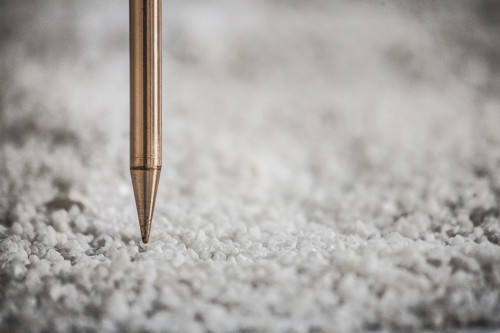 Roberto Marchese works on the idea of boundaries as well, by analyzing the evolution/involution of contemporary panoramas. Inspired by Gilles Clément’s Third Landscape, it focuses on those places which are presented as interstitial landscapes, open ranges between anthropized areas and natural ones in the wild, hybrid places imbued with a great cultural potential that have human inactivity in common and are transformed into «modern archaeological digs» where objects no longer in use  become future «antediluvian fossils».

Dross Archive is a series of «residual» works distributed throughout this Renaissance building: cement moulds of old television sets, mechanical scales and other obsolete equipment are the slag of today, new archaeological finds, symbols of a disconnected collective memory.

Abandoned land, car parks, warehouse sites, areas no longer in use and uninhabited zones of Naples are Marchese’s «Third Landscape», the theme of the photographic cycle entitled New Yort, a dreamlike journey into areas where natural and artificial, past and present cohabitate. Such scenarios are materialized in a site-specific installation displayed in a large frescoed hall, an undefined space that reminds one of a construction site or «areas waiting to be developed». This work made up of wood and metal sheet is a construction that disrupts visitors’ perspective, forcing them to look for another itinerary, a physical and mental detour activated by the decontextualization of the urban object. 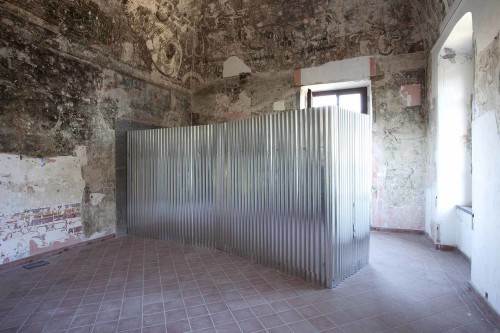 Lastly, and equally as alienating, is the environmental installation in which Marchese dislocates one of his ambiguous locations into a large shipping box complete with indications of the fragility of its content. It is a «habitable» space in which a stop motion video presents the persistency as well as the predominance of nature in a place marked by humankind where one can only perceive an evanescent presence.

In the Studio of Maurizio Mochetti