Rhizome.org continues its great anthology on Internet Art. The third chapter, with works from 2005 to 2010, begins with a series of practices staged by artists by operating on new communication means between users connected to the web and the large scale diffusion of data rather than by manipulating technologies and IT languages.

Google Street View, for example, was first released in 2007. As we know, this allows users to visualise a great number of places all over the world, recording these with a 9-lensed camera unit placed on a moving car (giving the work its title).

Isolating single images allowed Jon Rafman to build an interesting archive of photos, later printed and displayed in galleries. The artist illustrates how the aim of Street View to document everything that is visible is in no way connected to any aesthetic or ethical concern. The eye of the camera simply captures everything around it in a completely neutral way and, according to the artist, forces a new generation of producers and image manipulators to measure themselves with a new way of thinking about photography itself. Summing this up, Rafman states: “Street View photography, artless and indifferent, without human intention, ascribes no particular significance to any event or person” (Rafman via). Finally, Rafman’s intervention, by returning authorship to extrapolated images gives meaning back to the surrounding reality, which has always been art’s mission.

If in the 60s and 70s, in the era of mass production, the birth of Warhol’s ‘stars’ celebrated the person through the mythical power of television, money and images, what would be the result of the average person – irrespective of age, culture or origin – having access to a computer (a voice) and an Internet connection, its echo?

At the beginning of the new Millennium platforms like Myspace were among the first virtual communities in which anyone could obtain, curate and personalise their own Internet space through basic use of HTML. Here they could put themselves on display, let themselves be known and be in contact with other members of the community. 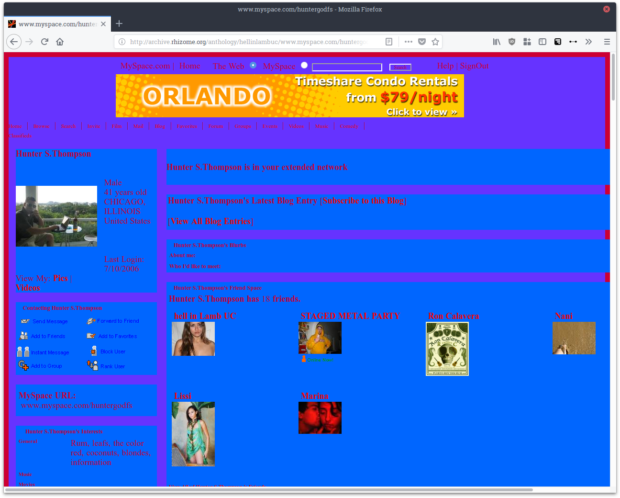 Attracted by this combination of connections and platforms, from 2003 to 2007 Pedro Velez fabricated a fictional web peopled by various invented characters “whose intersecting social media posts create a fragmented, nonlinear narrative full of gossip, argument, and violence” (Velez, via). The work is Hell in Lamb UC, “a complex portrait of the apparatuses that produce desire, from the art world to MySpace, and the power relations that structure this process” (Velez, via). It is easy to pretend to be someone else on the web; artists know this well and do not hesitate to use platforms, devices and networks to continuously create an imaginary world in which their characters can move – interacting and clashing with a wide range of views and opinions, allowing the emergence of varied preferences and behaviours among Internet users. 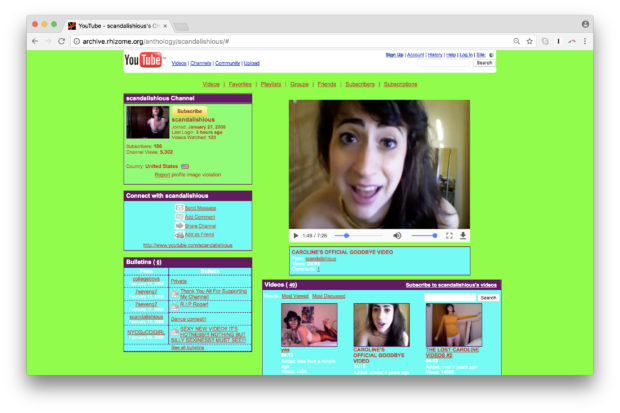 Ann Hirsch works in a similar way with her performance Scandalishious. This was ‘staged’ on YouTube and lasted eighteen months. The character invented by the artist was called Caroline, who posted camgirl videos on her own channel. This young girl, a self-styled “hipster university fresher”, interacted with her followers to create a web of relations representative of the growing ‘social’ generation. She acted “with a self-awareness that at times bordered on parody, while taking evident pleasure in the power and freedom and micro-celebrity it afforded her, and the complexity of Caroline and her online interactions” (A. Hirsch via). The performance attracted one million hits, mainly from a young male audience, giving Hirsch an overview of a generation “trying to figure out their identities in an age where your image, body, and story can be disseminated more widely than ever, and what that meant for who you are in terms of your sexuality, gender, and looks” (A. Hirsch via).

Today the digital society draws extensively on the hedonistic/promotional/communicational potential of the net’s multiform resources. Such a society exposes itself through social networks (the most popular being Facebook, Twitter and Instagram), creating places of meeting and exchange, commercial windows and personal diaries. On these social networking sites we not only see the private life of everyday, but also companies’ marketing strategies, which consciously take on current communication language to reach out immediately to the demands of the market. The rise of influencers therefore – from the success of a new celebrity to the sudden leap of a singer from Internet to television – is confirmed by their ability to reach and persuade a largest number of potential users, even when this is only as a result of their own online ‘appearance’ and, sometimes, for a limited period of time.

Big Data, the most significant challenge for contemporary business specialists, is nothing other than the traces left behind by our online activity: traces outlining interests, desires, emotional states and situations connected to real people in their everyday life which are also linked, sometimes unknowingly, to other online users and then classified according to macro areas to be analysed, archived and influenced.

It is increasingly difficult to distinguish what is real and what is alleged, and hence be able to escape the levelling of critical sensibility when analysing the paradigm “exposed, therefore real, therefore shared (and sharable)”.