The CSAC – Study Centre and Communication Archive of the University of Parma has recently inaugurated an exhibition itinerary in which seven of the sixteen sections open to the public at the Valserena Cistercian Abbey – a few kilometres from Parma – have been renovated. The itinerary features a selection of over 600 works that had not yet been previously displayed. These works are a portion of an extraordinary legacy consisting in over 12 million pieces entrusted to CSAC and are divided into individual collections: Art, Photography, Projects, Media and Entertainment.

The CSAC Archive-Museum is structured into sixteen different sections on exhibit in the halls of the extensive Cistercian Abbey: Sala delle Colonne (Hall of Columns), Sala Ipogea (Hypogeum Hall) and the Courtyard of the Abbey’s Sculptures and present the complexity and the wealth of the CSAC archive’s prestigious collections: seven completely renovated sections hosting works and projects were inaugurated for the occasion. 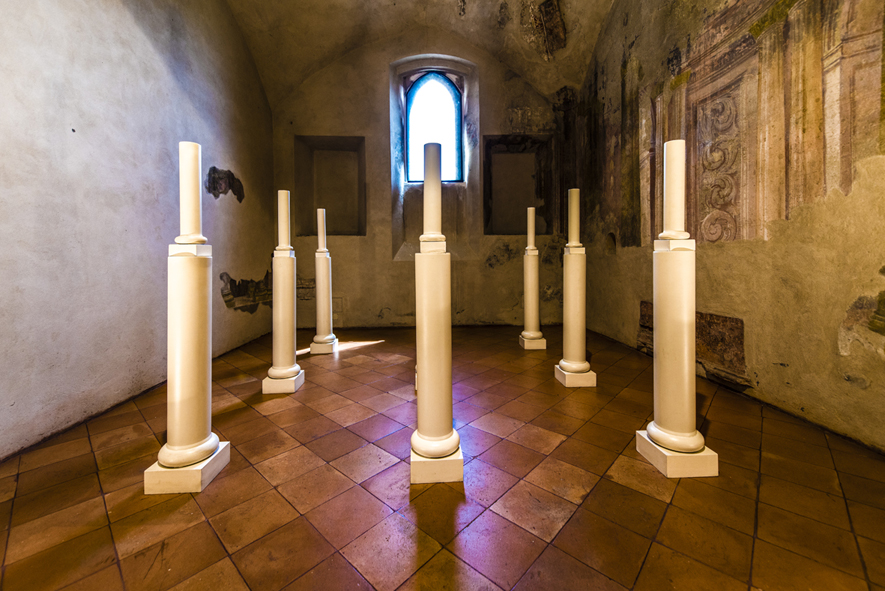 In line with the transversal and dynamic conformation of the CSAC Archive-Museum, the exposition was prefaced by constant re-evaluations and transformations over the past months: Giulio Paolini, one of the most notable exponents of Italian Arte Povera, was requested to personally design the placement of his Early Dynastic – a work created in 1971 and donated to CSAC in 1977 by Public Instrument – in the first chapel of the southern transept of the Abbey. 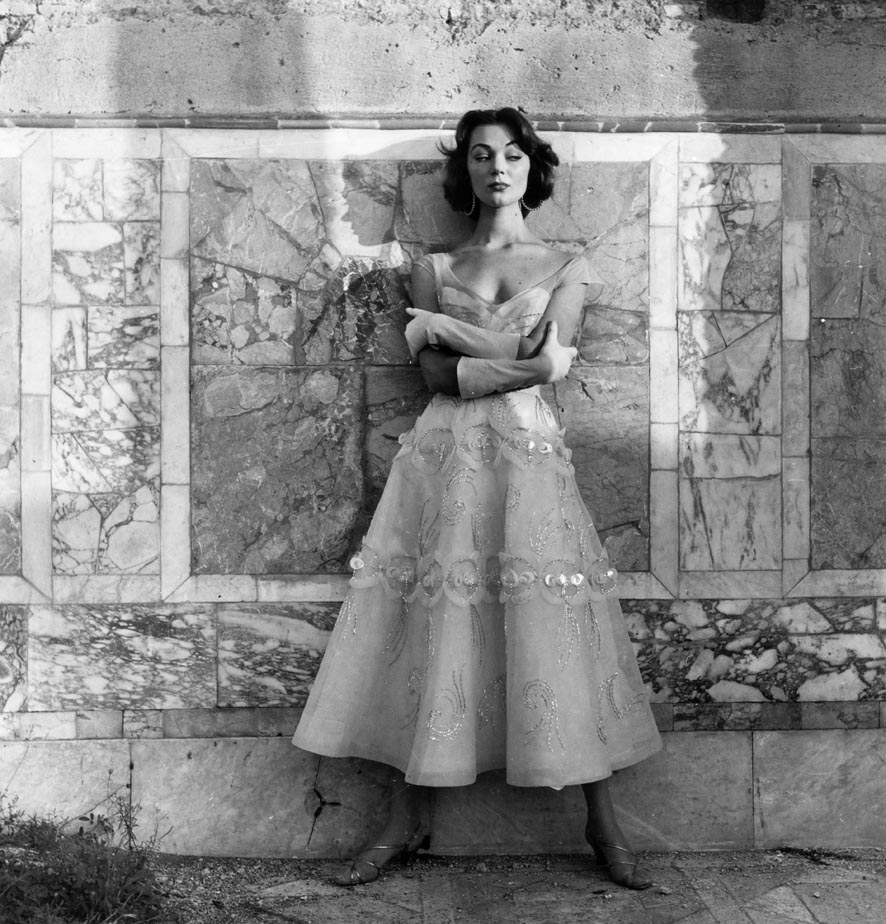 La porta con l’ombra (The door with the shadow), by Italian sculptor and painter Giuseppe Uncini famous for his works in iron and cement, stands nearby while the chancel area in the rear of the smaller southern nave is hosting two works by architect and minimalist painter Gianfranco Pardi: Tempio (Temple, 1980) and Architettura (Architecture,1973). 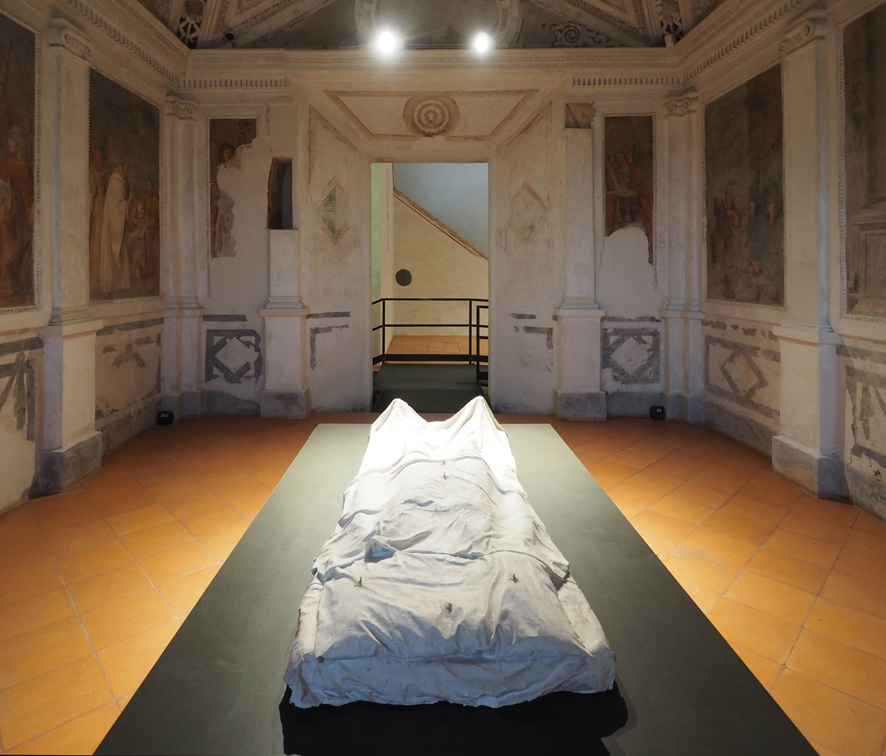 Over 300 works by Lucio Fontana (Rosario, Argentina 1899 – Comabbio, Italy 1968) are preserved at the CSAC archives, including an important group of sketches. A series of studies, portraits and caricatures by this artist who founded the Spatialism movement has been on display since this summer right next to his plaster and gold sculpture Il Fiocinatore (The Harpooner) hosted in the chapel dedicated to the Il progetto dell’arte (Art Project) as part of the CSAC museum itinerary.

As part of the museum’s renovation project, the chapel dedicated to Pittura, materia, téchne (Painting, Material and Téchne) is hosting (as of 26 November) the outfitting of Concetto Pozzati’s Ciao Roberta series of canvases. Almost fifty years after the 1968 monographic exhibit which inaugurated the CSAC museum, Pozzati designed a special outfitting project that extends to the Hall of Columns and features an anthology of sketches ranging from the 1950s to the year 2000 chosen personally by the artist from the CSAC repository. 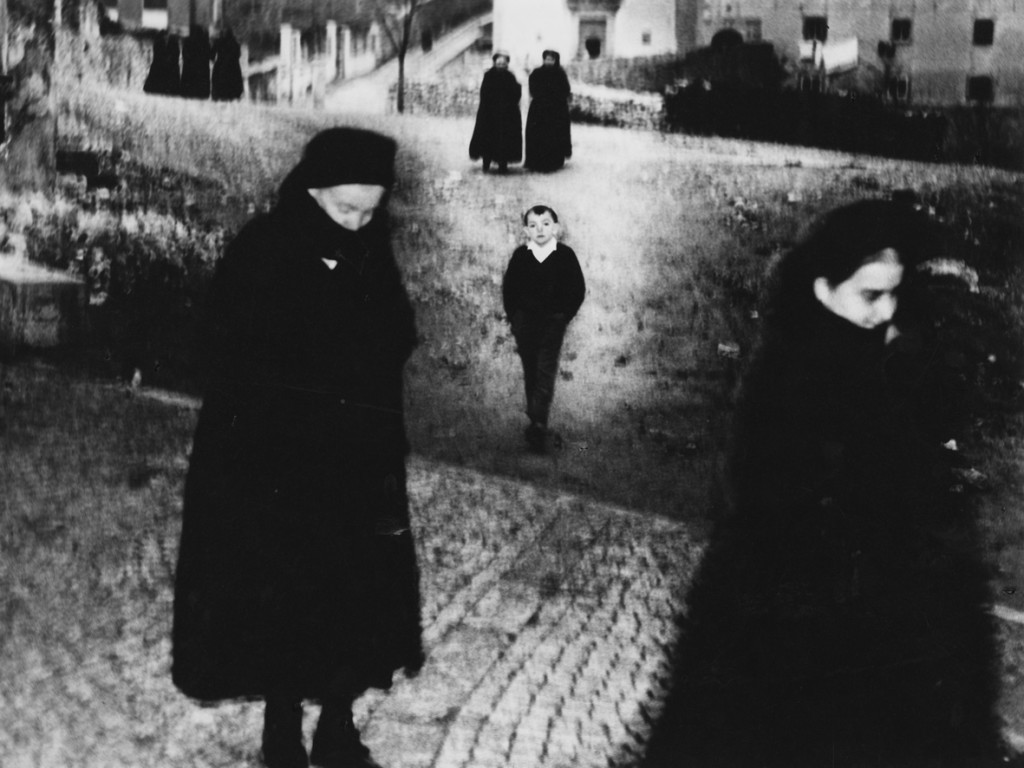 The Storie di architettura (Stories of architecture) chapel is offering three in-depth looks at several main archived artists featured in the project dedicated to 20th century Italian talents who have also been object of study programmes at the Research Centre: a retrospective look at the career of Ignazio Gardella is on display and includes his designs for Milan’s PAC contemporary art space, the Borsalino housing unit and the 9th Milan Triennial Exhibit while the insula is hosting two projects by Luigi Vietti and Roberto Menghi. Next to this is another section entitled Il progetto degli oggetti (The project of objects) dedicated entirely to Enzo Mari which documents his research embracing art, design, teaching and theoretical reflections; Il progetto del corpo (The body project) is illustrated through drawings and sketches by Sorelle Fontana – the absolute protagonists of Italian haute couture while the Abitare la scena (Living the Stage) project presents the renovation of the costumes preserved in the Atelier Farani archives, initially created for cinema, opera and theatre. The Foto-Grafia chapel is hosting an exhibit dedicated to post-war figures and includes Neorealism, Formalism and Photojournalism: Nino Migliori, the great and central figure of the history of the CSAC, will occupy the central insula while the walls will illustrate stories from the Publifoto and Dessena Rome and Milan Archives, Mario Giacomelli and Gualberto Davolio Marani, presenting various studies and schools of Italian photography from the 1930s to the 1960s. The final section, L’archivio cresce (The Archive is expanding), is dedicated to the introduction of the latest donations to the CSAC Archives which include works by photographer Mario Cresci and painter Pino Pinelli, both of whom were featured in the recent Fuoco Nero (Black Fire) exhibition. (from the press release)

The CSAC Study Centre and Communication Archive is a research centre of the University of Parma founded in 1968 by Professor Arturo Carlo Quintavalle located at the Cistercian Valserena Abbey which gathers and preserves original materials from the sectors of Italian visual communication and artistic-design research from the early 20th century to present. A legacy of over 12 million pieces is arranged in five sections dedicated to Art (over 1,700 paintings, 300 sculptures and 17,000 sketches); Photography (over 300 repositories and over 9 million photos); Media (7,000 poster sketches, 2,000 movie posters, 11,000 satirical and comic strip drawings and 3,000 illustrations); Projects (1,500,000 designs, 800 scale models, 2000 items and approximately 70,000 fashion-related pieces which include models, sketches, drawings, clothing and magazines) and Entertainment (100 original films, 4,000 video tapes and many antique pieces of cinematic equipment). Today the CSAC is a new multi-functional space that hosts an Archive, a Museum and a Research and Learning Centre. This formula is the only one of its kind in Italy and has consistently preserved and promoted activities such as consultancy and collaboration with universities (seminars, workshops, internships), the organization of exhibits and publication of their respective catalogues (over 120 between 1969 to present), lending and supporting exhibits held in other museums include such as the MoMA in New York, the Centre Pompidou in Paris, the Tokyo Design Center, the Milan Triennial Exhibit and the Museo Nacional Centro de Arte Reina Sofia in Madrid.