Many of the technological and scientific developments that are now a part of everyday way of thinking and acting were brought to life in military laboratories, especially active in wartime.  This can be said of the work of Norbert Wiener (Columbia, Missouri 1894 – Stockholm 1964), the father of cybernetics. His research resulted from his military role during World War II with OSRD under the direction of Vannevar Bush.

At a conference held at Princeton University in 1945, Wiener used such terms as «feedback», «input» and «output» in specific relation with engineering issues and the words became part of the technical language of the time. As the originator of cybernetics, the words coined by this mathematician and philosopher would not only be used in that field but would later become popular in everyday speaking. The real revolution here was the ability to convey the concept of feedback in a technological mentality and at the base of every evolution of humans, machines, and forms of communication between them. This is the thesis presented in his first book entitled Cybernetics, or control and communication in the animal and the machine (1948). It was the beginning of a study of machines that originated from a study of human beings, the exploration of their neural and muscular structures and their function in response to external stimuli. For Wiener, the theory of feedback was initially applied to his work on automatic aiming and firing of anti-aircraft guns during World War II. A radar provides information to a calculator regarding the aircraft to be shot down. The calculator points the cannon while taking into account the proportion between the aircraft’s speed and the time needed for the bullet to hit it. In this case, «feedback» is the missed shot in function of perfecting the following shot until goal has been reached. This is the premise of what is known today as cybernetics and whose dictionary entry is as follows: the science of communication and control theory that is concerned especially with the comparative study of automatic control systems (as the nervous system and brain and mechanical-electrical communication systems). 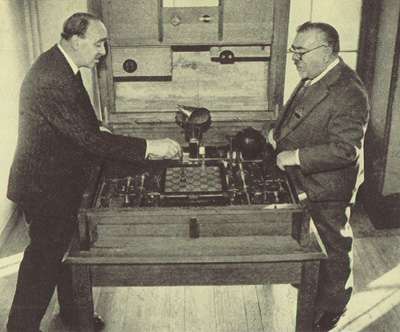 Its principles have been applied to all fields from neurology (exploring mental illness) to art (in experiments using telecommunication like works created by multidisciplinary English artist Roy Ascott, a pioneer in the usage of cybernetic theories in the creative sphere). Wiener anticipated theories which were put to immediate use in wartime. They would, however, become fundamental to humankind. His work also led him to understand –and experiment firsthand- the danger of the power of technology and information. After the war, Wiener dissociated himself completely from the government and all military projects, refusing any government funding for his scientific research.

His theories are still applicable today. The Norbert Wiener Center for Harmonic Analysis and Application was founded in 2004. This institute is dedicated to mathematical engineering and its online site also offers a full bibliography and index of events dedicated to the studies of Norbert Wiener.