On 24 November 1960, the Séminaire de Littérature potential literature workshop was created as a sub-committee of the Collège de Pataphisique. The seminar would later become the Oulipo – Ouvroir de littérature potentielle – founded by Raymond Queneau and François Le Lionnais, two writers and mathematicians who gathered professors, writers, mathematicians and engineers to form a group of thought.

Mathematics and literature along with computers and technology become part of linguistic games and narrative experimentation in search of new structures and patterns of writing. Mathematical games like palindrome sonnets (the sequence of characters forms the same phrase when read in reverse) or lipograms (writing that excludes one or more letters) – to mention a few – are literary interpreters of a «science of imaginary solutions» coined by Alfred Jarry as his concept of pataphysics, from which the Collège de Pataphisique gets its name. Freeing literature of its conventions, much like the way words were freed of their phonetic reference (starting with the technology of the press that had made written transcripts possible), algebra and algorithms interceded to facilitate the development of valid narrative techniques. 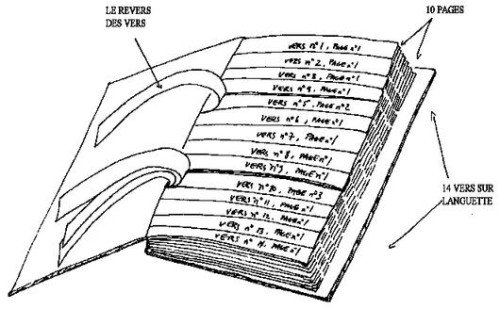 Exercices de style, written by Quenau in 1947, is the work that best presents the spirit of this group. The episode of a man on a bus being annoyed by another passenger is told in 99 different styles, adding emphasis to the event and therefore to the form of its content. Queneau’s Cent Mille Milliards de poèmes / Hundred Thousand Billion Poems analogically anticipates and introduces one of the many potential roles of the computer in the formulation of new narrative styles. In this text, every page contains a sonnet, each line on a separate strip for a total of fourteen strips per page. The reader is encouraged to photocopy and cut the strips to create different combinations of poems. It was estimated that it would take some 200 million years to read them all. This combinatory system inspires use of a computer for the possibility of processing an infinity of variations on a package of provided initial information. Italian writer Italo Calvino demonstrated the amount of artistic content that could be extrapolated from a computer – not so much in terms of incalculable data processing as in what happens with the opposite operation, an «anti-combinatory one». In this case, from a variety of situations the computer will select a few ones, the ones that better respond to logic and harmony. In this moment the text achieves its own artistic value that releases also in the new relationship  between writer, reader and literature to define a new type of interaction. Therefore, the relationship between the computer and literature is not all that new and, as in all experimental forms of any art, only needs some time to acquire validity and autonomy. The same holds for the identity of Oulipo. Created in the 1960s, it did not acquire an authentic group identity until the 1970s.