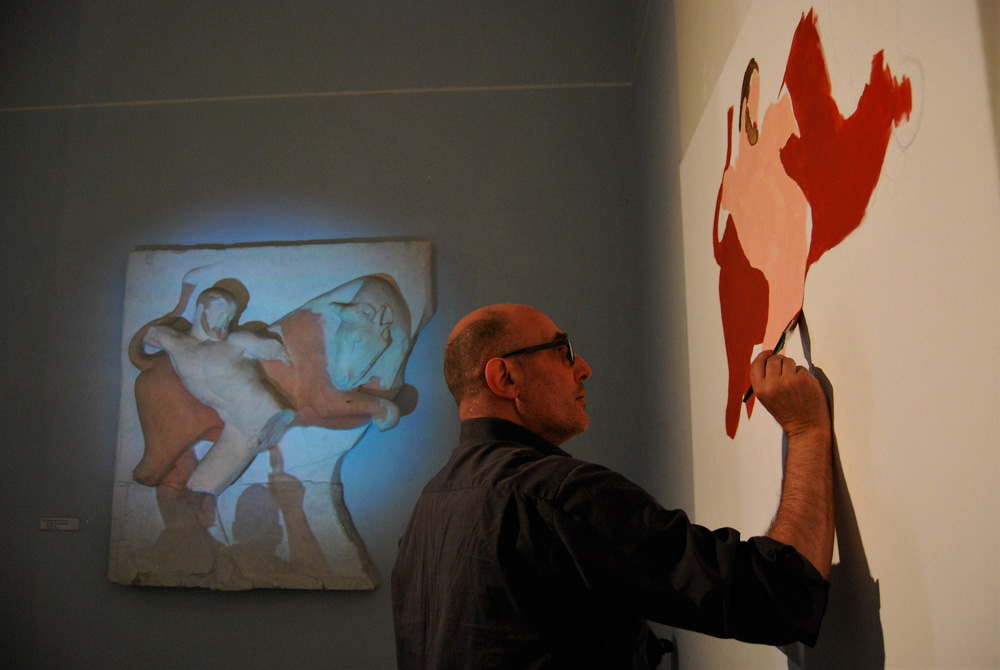 What’s to become of painting in our media-dominated times? Are we destined to see the fading out of traditional artistic mediums, swallowed up by digital, or might technology perhaps be used to reinvent them? The latter would be the hypothesis suggested by the works of Andrea Aquilanti (born Rome 1960): installations in which drawing and painting combine with the immaterial of video projection.

Since the early 1990’s, even before he began using photography and then video, Aquilanti’s works have been conceived on the basis of the site for which they are created. Their relationship with the space and with the viewer who inhabits it, and his reflections on representation and the instability of perception are the themes which feed his research. The practice of painting becomes a conceptual operation which, in spite of his reliance on traditional subjects, is more concerned with the need to analyse the constituent elements of images and the mediums with which they are produced, rather than having a merely representative purpose.

This explains why, from the second half of the nineties onwards, painting is superimposed on photographic print and later video projection, creating a layering which is typical of Aquilanti’s work to this day. 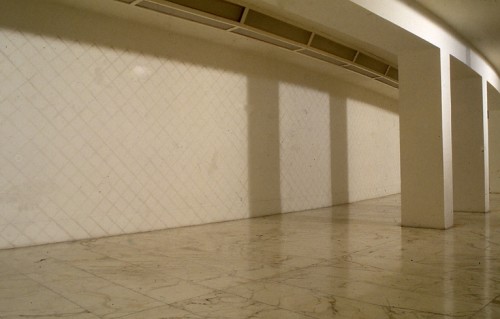 A significant step, especially in terms of viewer engagement, is the use of projection, which makes his video installations open works, open to modification by anyone who enters the system designed by the artist. Unlike a painting, projection is an immaterial, evanescent image which can be cancelled out by someone standing in front of the projector, thus revealing with their shadow the surface of the wall and the drawing made by the artist, as in the case of Voliera (1999, Museo Laboratorio di Arte Contemporanea, Sapienza University of Rome).

Artistic tradition relives in Aquilanti’s works too, in his frequent references to the painting genre of landscape, often captured by the lens of a video camera aimed at the outdoors and shown live through projection. The device of the closed circuit, often used by Aquilanti, creates unstable images, constantly changing.

This is case with Né in cielo né in terra (2006), where a panoramic view of Rome, filmed live from the roof of Palazzo Taverna, was projected on the ceiling of the Biblioteca degli Incontri Internazionali d’Arte. The changing picture of outdoor life was superimposed on a 360° painting, creating a dialogue between two images of different kinds. Reference to the nineteenth century landscape genre is found again in the exhibition Ipotesi per quel che la pittura non dice (NOTgallery, Naples 2009), a singular title which clearly suggests the need to exceed the boundaries of painting, and proposes a hypothesis for interaction between reality and its representation. Using Lucid Viewer software, the external view was captured from several points simultaneously, giving a 360°panorama which was then re-elaborated using paint. This is a clear example of the way in which technology transforms not only the manual and material nature of painting, but also the representation of space, thanks to a view different to the human and therefore distanced from the monocular perspective. The experience of painting was modified too, becoming more immersive because the paintings themselves were photographed and inserted into the software so that they could be explored using a mouse. 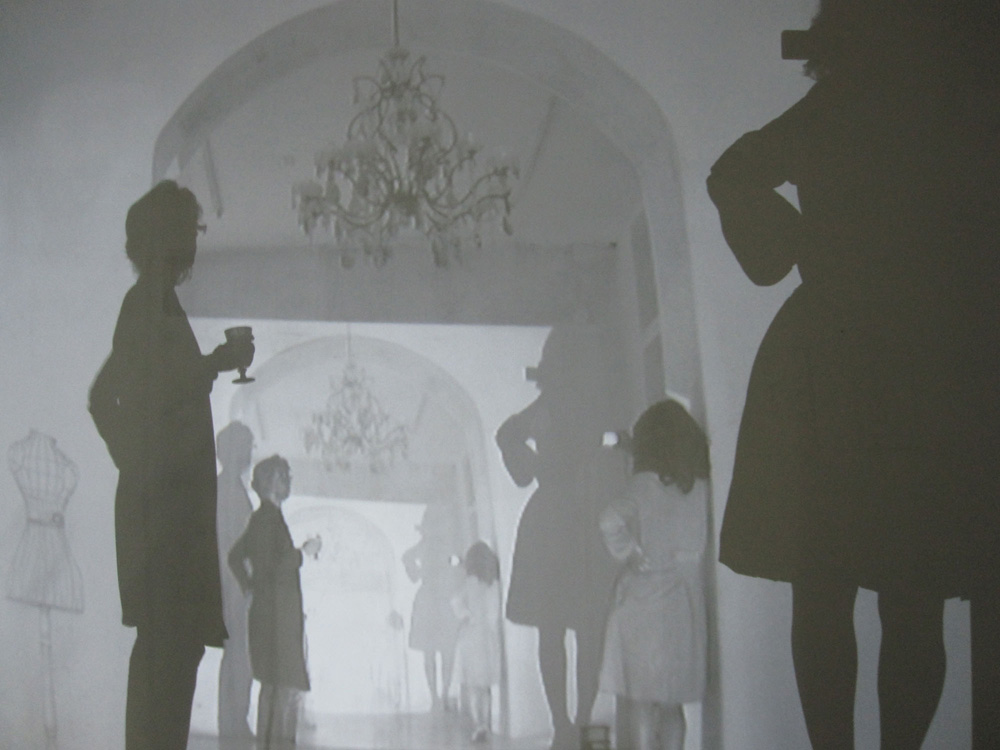 To be honest, this work is unique in Aquilanti’s oeuvre; he prefers instead to use technology in ways far removed from sophisticated complexity. The interaction he seeks is actually very distant from the effects of virtual reality and is based on a play of superimposed images; an interaction which becomes more explicit where there’s a video camera aimed at the viewer. This is what happened during the Post Classici exhibition in the Roman Forum, where Aquilanti superimposed live images of the visitors onto a projection of Piranesi’s Carceri (Carceri Visionarie, 2013). Following a similar logic, which turns the viewer into part of the work, at the 2015 Venice Biennale visitors could also see themselves over a Piranesi etching. In this case the  subtle play of layerings was accentuated by the presence of painting, a fine membrane which emerged on the wall whenever a shadow fell across the projection. 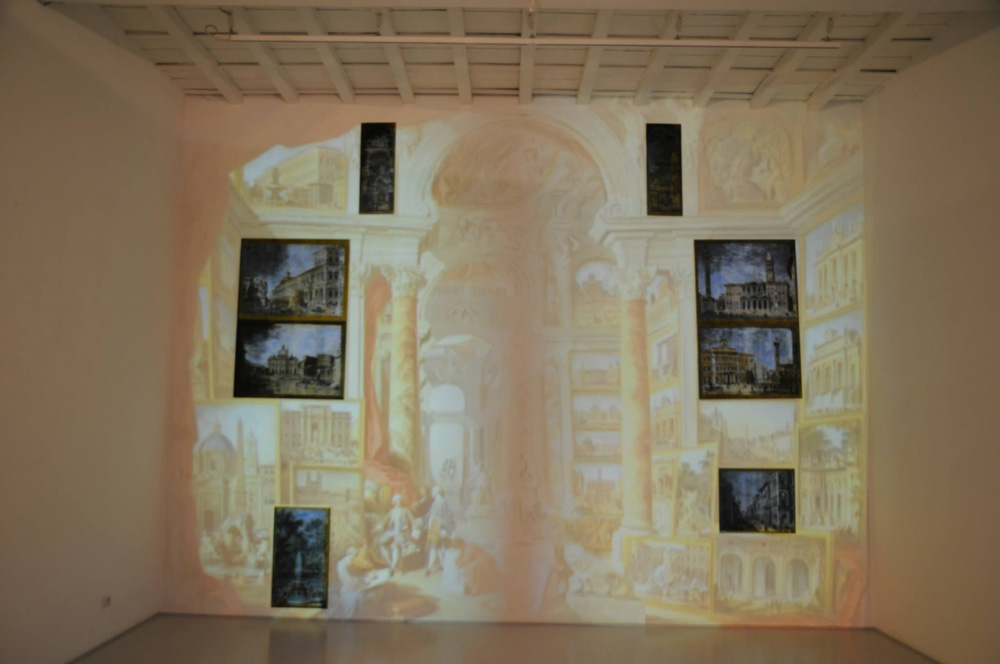 These examples demonstrate how Aquilanti’s work is nourished by confrontation with the past by means of a citation which reinterprets, relocates and updates a piece of history. In the same period as the Post-Classici show, the artist was working on Veduta di Roma Moderna (De Crescenzo & Viesti Galleria d’Arte Contemporanea, Rome), in which his predilection for the landscape genre and the dovetailing of images to create a “painting within a painting” was made explicit by the reference to a painter such as Pannini, known primarily for such techniques.

Curiously, Aquilanti has recently undertaken a work from art history which exceeds the two- dimensional nature of painting. This work is Rivedere Eracle e il toro di Creta (2016), created for the exhibition Confluenze. Antico e Contemporaneo (curated by Nicoletta Cardano and Francesca Gallo): a reinterpretation, as the title of the piece suggests, of one of the many plaster casts at the Museum of Classical Art at La Sapienza in Rome. 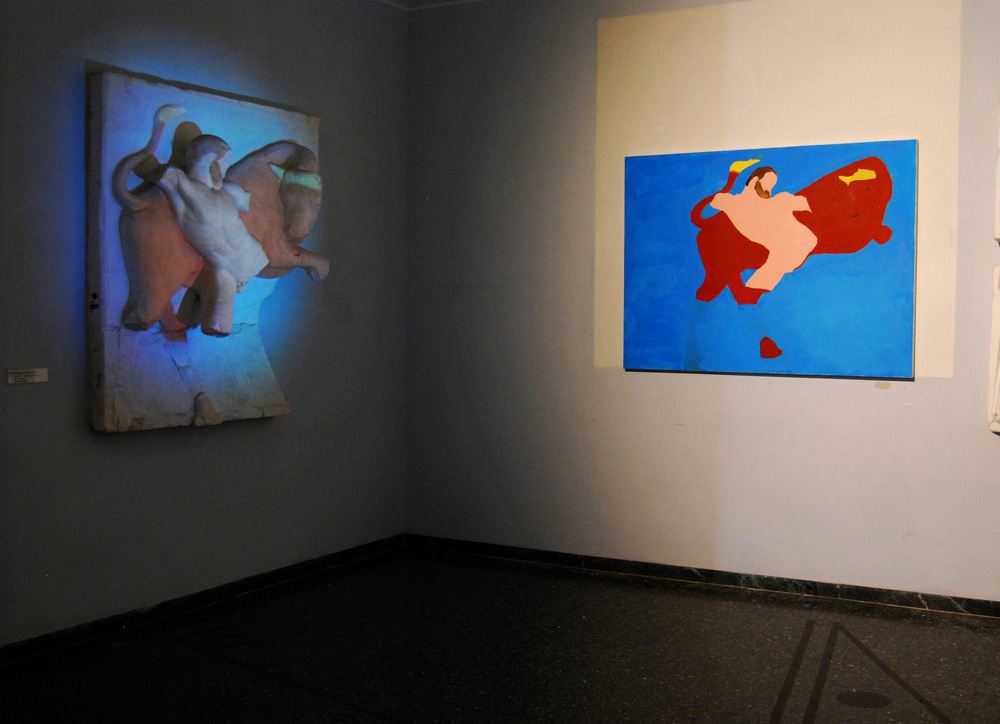 The video installation, on display until 18th June, consists of a closed circuit: a video camera is aimed at a brightly-coloured canvas and a projector relays the image onto the high relief, giving it the same colours, albeit less bright. Technology has also transformed the process of working, because while the artist was painting he was looking not at the canvas, but at the sculpture on the adjacent wall. Moreover, the video camera used in the creation of the work remains pointed at the painting, filming anyone who passes in front of it and relaying their image onto the relief of Heracles. Following the usual game based on the instability of images, the visitor modifies the work by going into it, or, by darkening the projection with their shadow, thus revealing the true whiteness of the plaster. The coloration added by the projection inevitably reminds us of the use of colour in classical art, cancelled out by time, but this is also an operation which shows a certain lightness. It’s the lightness of creatively interpreting a classical relief, but also the lightness of a discreet action which clothes the relief in immaterial image: the projection is intangible and colours the plaster without so much as touching it.