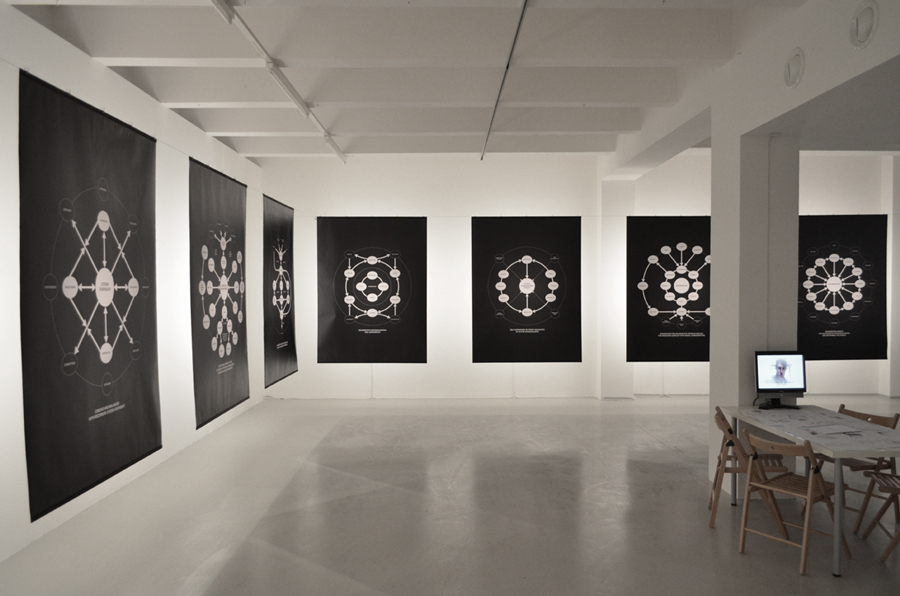 Paolo Cirio is an Italian activist whose artistic quest coincides with the political and social ones. It progresses within the confines of the media for the purpose of examining its social impact on the current state of affairs as well on the vision of a potential reconquest of democracy enabling it to recover its etymological definition in the «purest» sense of the term (démos/common people and cràtos/rule, that it to say: «rule by the people»). Turbulence.org, the long-standing platform dedicated to commissioning art on line, has produced and is promoting Paolo Cirio’s latest project: Global Direct. It is currently on the internet as well as on various channels of communication as a political campaign, and it was featured in a art venues in the name of an artistic operation.

Global Direct is none less than an aspiration towards a new vision of civilization in which the potential of technology and communications are used in favour of social re-structuring on a global level and throughout an unconventional creative vision. This means working with technology consciously in order to divert the power of the industry, current politics and of today’s market and re-distribute within the grasp of the individual so that each one of us can restructure our lives into a decentralized and global strength. 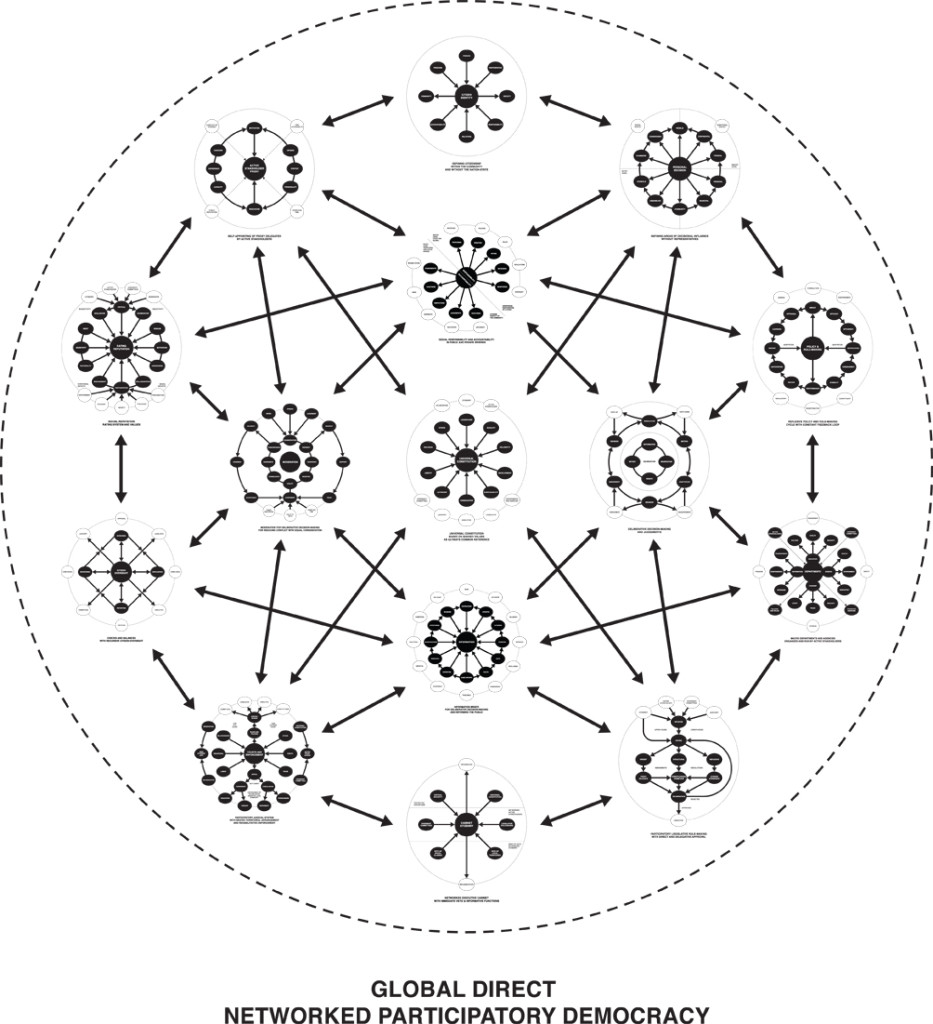 Cirio has released a statement that explains: «In this project, globalization becomes an opportunity for autonomy and setting of people’s agenda beyond the limits imposed by local authorities and politics, while decentralization allows independent self-management within local communities. The new centre of this proposed system is ethical and cultural and becomes the ultimate universal reference for everyone’s common interest.» It is from these theoretical and ideological bases that Paolo Cirio’s artistic project departs. His creativity has found its home over time in the interest of taking on an active role in social changes beginning with a meticulous analysis of what most influences their conformation and evolution – and the internet is one of the main factors. 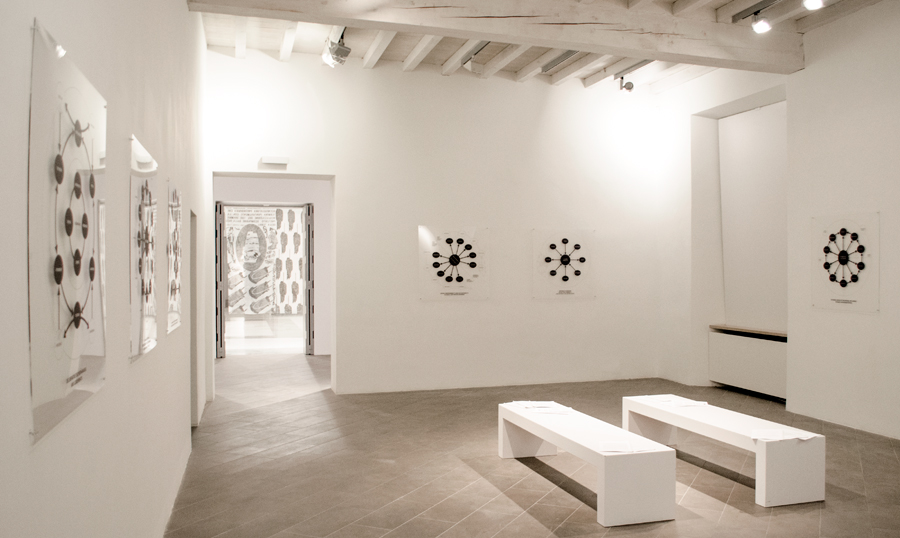 How can we visualize all of this and what can be reached in art-related exhibit space? Video-interviews and a series of diagrams are on display – data element mapping developed in programmed instructions and conceived as a prototype for new models and for art with a value similar to that of art, conceptual and performance-related documents from the 1950s and 1960s. The diagrams are organizational charts that propose new configurations of political and social organs so that the techno-utopia of global democracy can embark upon its journey and become a reality. 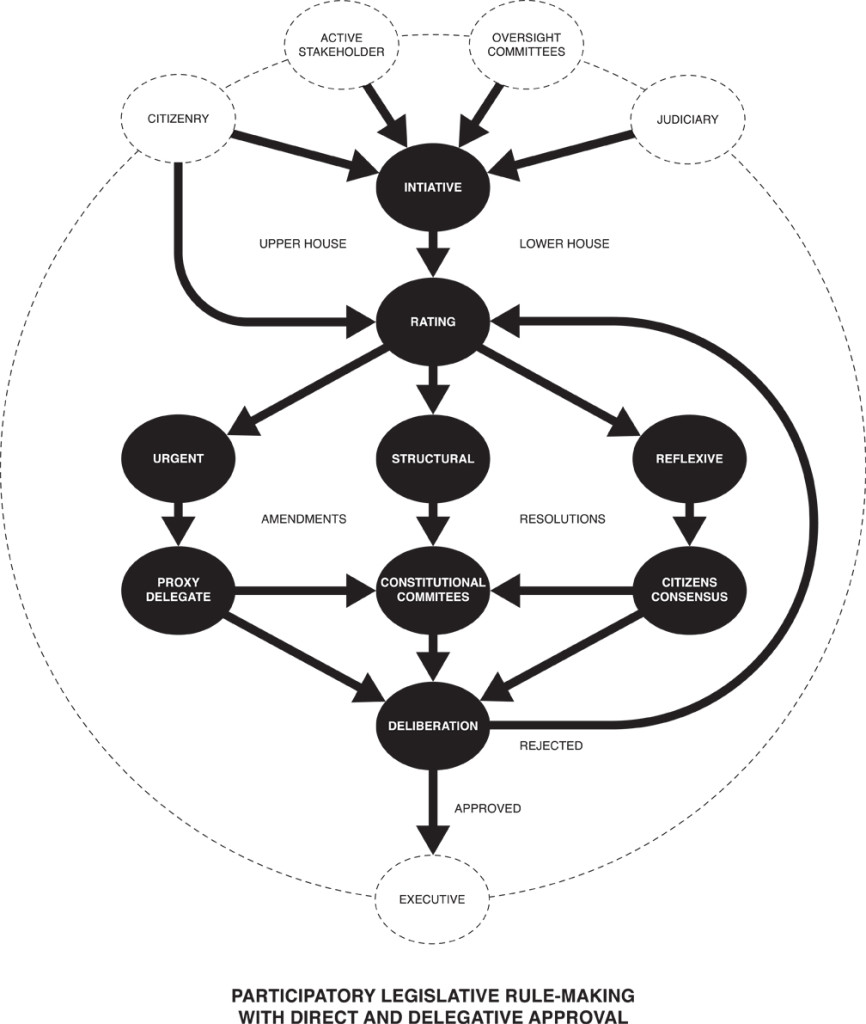 In short, this is an analogical visualization of data obtained (in this case) from research that not only draws upon scientific sources but it also includes exchanges with professionals and visionaries from the sector who are a privileged source of inspiration and knowledge. Paolo Cirio, while commenting his project during an interview with Andrea Tinterri, disclosed that he thought «…There could be city-states in the future. We talk about decentralization, on perceiving contemporary society based on networks, routers, polycentric and circular connections. The point is how these cities, these small nuclei and the hubs/junctions of such vast networks can interact on the same level as social and economic values. There is no need to interpret this like a return to the Middle Ages or a new Renaissance of the capital city-state, each with their own laws and economy, perennially at war with neighbouring cities. The cities I have in mind do have their own laws and currency yet they maintain a mutual relationship with their neighbouring junction and mutual connections that extend to a global level. It’s a paradox, but the work I have done on tax havens and offshore companies[1] explore city-states and their independence because these tax havens are based upon the fact that they can have their own laws due to national sovereignty and are not subject to any controls. But, their decisions influence the world’s population at the same time. This is the possible negative consequence of the decentralization of the city-state or even of a globalization that has advanced without having ever been politically formed. It is for this reason that we need a universal constitution which protects political and economic rights on a global level and gives sovereignty to the citizens of every community and to the entire planet.»

«Art reflects its times». It may be a cliché, a truism, but it is the truth nonetheless. Paolo Cirio’s art portrays its times in an alternative type of landscape which mirrors, in return, an art that engages in modifying its very same outline by taking full advantage of art as a forceful channel to penetrate and impact the structure of power.

(recently featured at  DOX Prague and at Palazzo del Governatore (Parma, Italy), within the event «Caratteri», curated by Andrea Tinterri)

[1] See, for example, his previous work Loophole for All mentioned by Arshake in regards to the «Territori Instabili» (Unstable Territories) exhibition curated by Franziska Nori on view at Florence’s Strozzina Centre for Contemporary Culture.