by Michela Ruggeri
in From the Past

The year was 1976. What would later be defined as the «working class youth group» had organized at Parco Lambro in Milan a pop music festival in a public urban area. If Woodstock has now become an icon of a rally of young people gathered together in a social context and a symbol of an era characterized by idealism and social struggles, we could say that the Festival at Parco Lambro is one of its equivalents. Although it is on a smaller scale and came along a bit later.

The backdrop was a city in full cultural and political turmoil filled with young people committed to social struggles: homosexuals searching for their own space beyond existing prejudices; young women striving for total emancipation and a young generation between 20 and 30 years of age (to be found everywhere) who were combining hippy psychedelics and politics. But above all, there were the musicians. They advanced with enthusiasm beyond boundaries amidst traditional rock, folk, singer-song writing styles of music and the extraordinary possibilities offered by electronic music. This new generation of Italian avant-garde artists took the role upon themselves of promoters of a new vision: the universal language of music was rapidly changing its forms but it remained the preferred means of social and cultural promotion.

The Area proposed an innovative musical experiment called Caos parte II with the idea of taking full advantage of the event’s human and collective potential to generate electronic music. During one of the many concerts, two long electric cables were carried over to the crowd, both of which were connected to a synthesizer that was transmitting a sequence of semi-random sounds of limited width.

The cables functioned as transmitters and modulators of sound frequencies which varied, depending upon the amount of bodies they came into contact with. Every person who was invited to touch them would then close the electric circuit: the more hands touching them, the more random the sounds became.

Keyboardist Patrizio Fariselli 1 explained that it was not easy to convince people to touch a bare electric wire. It was also not easy to avoid arguments, brawls and clashes between participants and the annoyed conservative citizens – foreshadowing that which would soon become the armed struggle whose violent and uncontrollable implications would bring rise to terrorism and obliterate dialogue and participation. 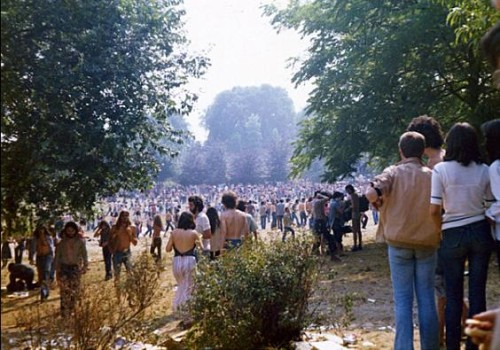 We know how history later developed and we can now easily identify the legacy and social conquests we owe to those years along with the component of disillusion and failure of the revolutionary dream. Nonetheless, observing the experiment of the Parco Lambro as an example of a collective phenomenon is a precious reason worth pondering. An event in which art, more specifically music, was not only used to promote social messages departing from the base but a vehicle of intrepid experimentation in the Italian society that has always been challenged when faced with less than reassuring news. Furthermore, we must recall (researchers in the sphere of new media have explored the topic at length) how the concept of «piazza» interpreted in the sense of agora in which political participation and exchanges between individuals took place has evolved from a real to virtual platform almost completely replaced by the Internet. In fact, there are many Net.art artists 2 who have been emphasizing the collaborative phenomena of the web since the 1990s – with its pseudo-democratic character which puts real guerrilla techniques into use in their so-called Infowars. Parco Lambro’s musicians, like modern-day foreseeing poets, were the intellectual and popular spokespeople of the urgent social issues of that particular moment in Italian history while the collective event functioned as an adjuvant for artistic experimentation, many years before the arrival of the web.

[2] An example of this is AgoraXchange by Jackie Stevens (http://www.agoraxchange.net/), a net work from the Intermedia Art collection in London’s Tate Gallery which began in 2004. Web users were invited, on a recreational basis, to participate (as virtual citizens) in the construction of an ideal state and to discuss real political and social issues. The final result was not only a collaborative kind of site (similar to Wikipedia, the collaborative website by definition) but – above all – a means to explore real problems in a virtual agora where users could meet, debate and exercise their right to vote.