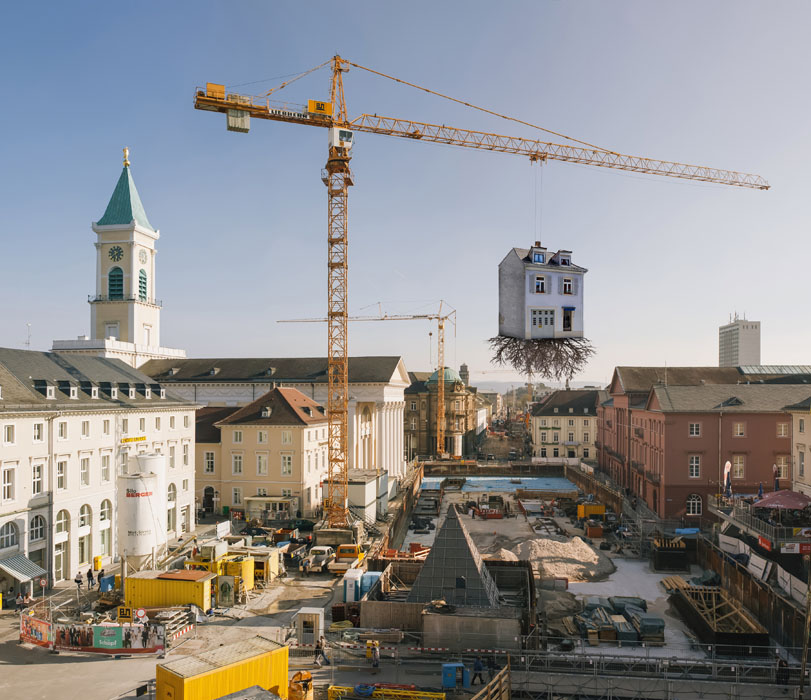 With his spectacular large-scale installation on the Marktplatz, Argentinian artist Leandro Erlich inspires wonder among passers-by and inhabitants. Pulled by the Roots is the title of the work, which gives a crane an unusually heavy payload: no building materials, container or machines hang on the »art crane’s« steel ropes – quite unlike the other cranes of the city. An entire house hovers in airy heights above the construction site. Architecturally inspired by a historic building by Friedrich Weinbrenner, the building appears to have been pulled up by the roots from one of the neighboring streets.   Many inhabitants experience construction sites as a strain, if not a catastrophe. The building process lasting a number of years is also made difficult by unforeseen disruptions and incidents. One frequently comes across images of an urban situation in which one is uncertain as to whether it emerged intentionally or unintentionally, whether it was the result of chance or accident. 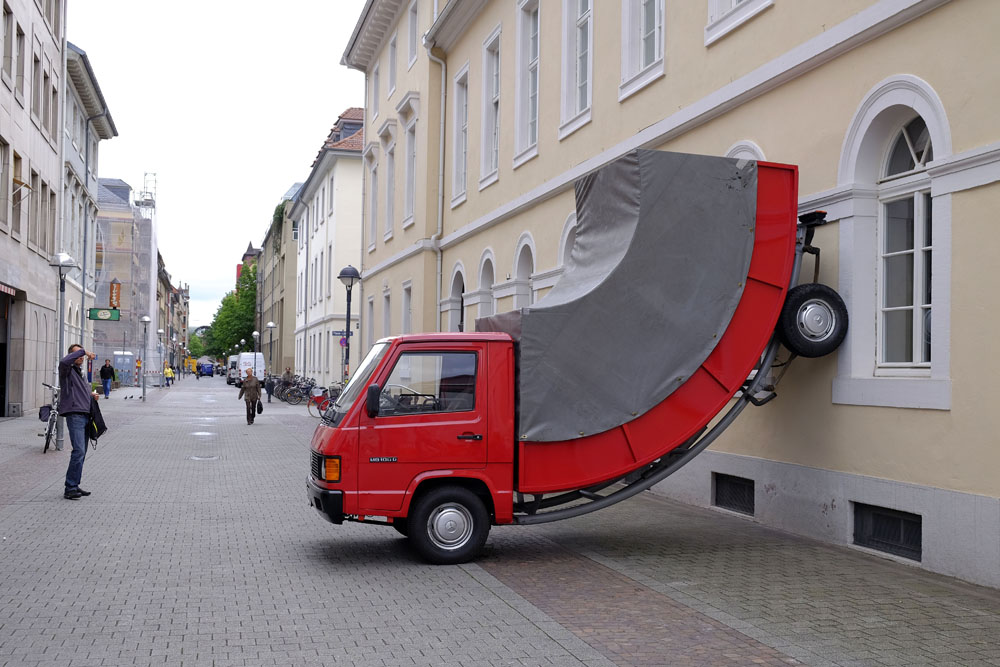 The Truck by Erwin Wurm, the loading area of which is bent, and whose back wheels are placed on the wall instead of on the ground – was it accidently squashed against the wall by a digger or a crane? Was it thrown against the wall during a storm? Or is it one of the cars of the future, which can be ramped-up in reverse against the wall?   Similar considerations also hold for the Car Building, by Hans Hollein, which can be located at the interface of public and individual traffic near to K-Point. These vertically stacked VW Beatles – are they the result of the explosion of a gas pipeline in which they were thrown up into the sky before then landing at this location? The stacked VW Beatles articulates a fitting image for the city, accounting for time and cost-intensive restructuring for an improved traffic network. 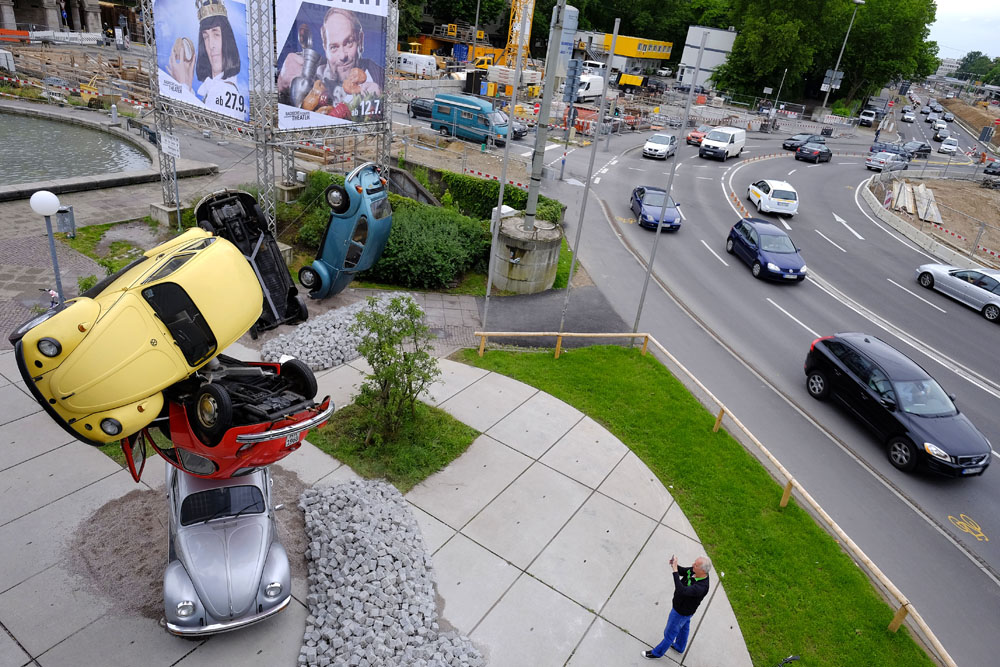 Heaven’s Carousel, by Tim Otto Roth, which can be seen in the evening hours at Friedrichsplatz, provides welcome distraction from the noise of the construction site. Whoever lies beneath the crane with the rotating balls of sound and light, will have an audio-visual experience far from the everyday. The spherical sounds from the work of art are based exclusively on Sine tones and visualized through the color of the balls.

The performance by Michael Elmgreen and Ingar Dragset appears to function as a kind of excuse for the construction site, which makes the life of the inhabitants and visitors throughout the entire city center somewhat difficult. In the case of It’s Never too Late to Say Sorry, a man walks towards a publically installed vitrine every day at precisely twelve noon, takes out the megaphone and calls out to the passers-by that it is never too late to say sorry.

With its multi-piece art project Safe in the City the artist-duo Wermke/Leinkauf takes the safety measures connected with the building regulations as starting point for its urban interventions. Yellow and red signal vests, as worn by construction workers provide the material for unusual Actions at the main train station. 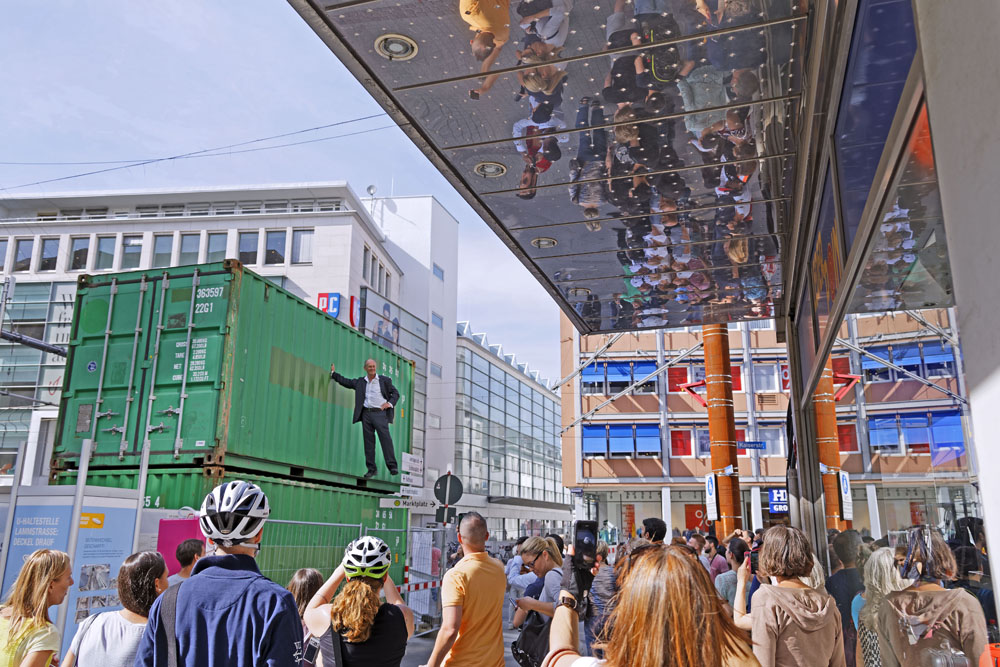 By way of his daily, half-hour performance Tarzan/Standbein, performance artist Johan Lorbeer provokes wandering passers-by by hovering, bolt upright high above a normal construction container. City strollers have internalized the fact that construction containers and not army tents dominate the city and that some passers-by or construction worker may lose their way. Lorbeer appears to have experienced just such a destiny. Has he been forgotten? How did he get up there and how will he be able to get down?   In the same way construction sites wander with the development of construction work, thus also do several works of art change their location over the course of the exhibition period. 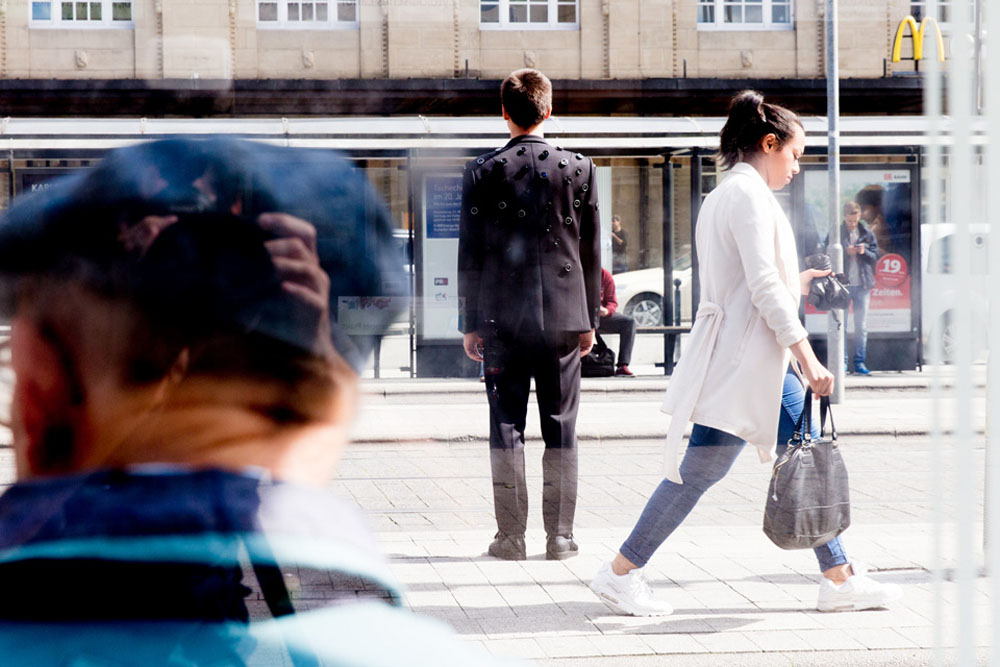 With the Aposematic Jacket, a jacket equipped with numerous webcams, Korean artist duo Shinseungback Kimyonhung wonder through the city and thus capture the effects of the construction measures. Their observations can be viewed online. They thereby thematize the omnipresence of surveillance measures.   With their works Hybride Zonen [hybrid zones] and A good reason is one that looks like one, Chantal Michel and Christian Falsnaes intervene in everyday actions in the public space and animate the passers-by to transformations in their behavior.   The vocabulary of art in public space is extended through these performances. Public art mainly comprises sculptures, forms, objects which contain a memory or else aesthetically accentuate public spaces. However, since the performative turn we can assume that public art can also be a form of action. Thus, similarly, art in public space can be an action in public space: an ephemeral event, a demonstration, and intervention. This innovation entitled Performing Public Art is at the core of the project «The City is the Star». (from the press release)«The City is the Star», a cura di Peter Weibel e Andreas F. Beitin, ZKM, Karlsruhe, Germania, 19.06.2015 – 27.09.2015