The Los Angeles County Museum of Art (LACMA) presents Pierre Huyghe, the artist’s first retrospective in the United States, bringing together over 50 works from the past 25 years. Often collaborating with specialists in fields such as science, literature, film, music, and architecture, Huyghe’s diverse practice includes live situations, exhibitions, films, objects, and drawings.

The exhibition emphasizes the living dimension of Huyghe’s propositions, which envision the space as a world, evolving according to its own rhythms. Creating what he refers to as «auto-generative systems,» the artist constructs a set of conditions and allows events to unfold following their own course. Emergences are indeterminate and exist beyond our presence; animals, machines, objects, and humans become understood as contingent and durational, rather than static, entities. Instead of displaying a selection of objects, the exhibition explores the porosities and the intensities that arise between elements. In search of what the artist has termed a «non-knowledge zone,» Huyghe approaches an existing system and creates a speculative proposition: a «what could be.» Influences and role-playing are the materials with which he works. 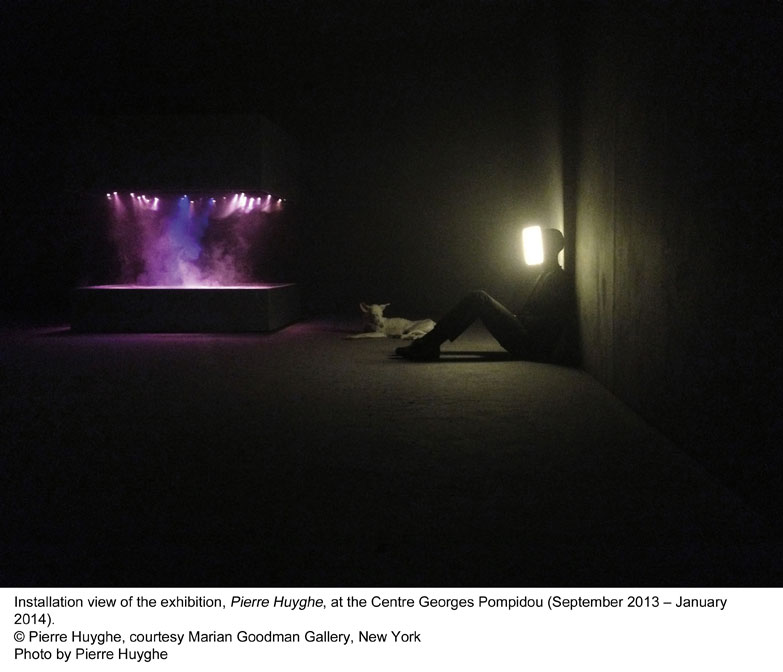 Exemplifying Huyghe’s unique methodology, multiple elements from his 2012 installation at dOCUMENTA (13) have their US debut in the exhibition, including Untilled (Liegender Frauenakt), a statue of a reclining nude that has been colonized by a living beehive; Human, a white Ibizan hound; and the film A Way in Untilled, which was filmed on site in Kassel, Germany. In addition, the presentation will include the world premiere of a new aquarium and the US premiere of the film Untitled (Human Mask). Taking the exhibition and its accompanying rituals as an object in itself and a living entity, Huyghe explores the possibilities of this dynamic experience and the mise-en-scène of its boundaries. The encounters that occur in Pierre Huyghe are not choreographed but unplanned. (from the press release)

Pierre Huyghe (b. 1962, Paris) was educated at the École Nationale Supérieure des Arts Décoratifs in Paris. He has had numerous international solo exhibitions at venues including most recently Museum Ludwig, Cologne (2014); Centre Pompidou, Paris (2013); Museo Tamayo Arte Contemporaneo, Mexico City (2012); Museo Nacional Centro de Arte Reina Sofía, Madrid; the Art Institute of Chicago (2010); and Tate Modern, London (2006). In 2001 he represented France at the 49th Venice Bienniale with his exhibition Le Château de Turing and won the Special Jury Prize. Huyghe has also participated in a number of international group shows, including dOCUMENTA (13) (2012); Documenta (11) (2002); the Istanbul Biennial (1999); and the Carnegie International, Pittsburgh (1999). He was the recipient of the Roswitha Haftmann Award (2013), the Smithsonian American Museum’s Contemporary Artist Award (2010), the Hugo Boss Prize (2002), and was a DAAD Artist-in-Residence in Berlin (1999–2000). 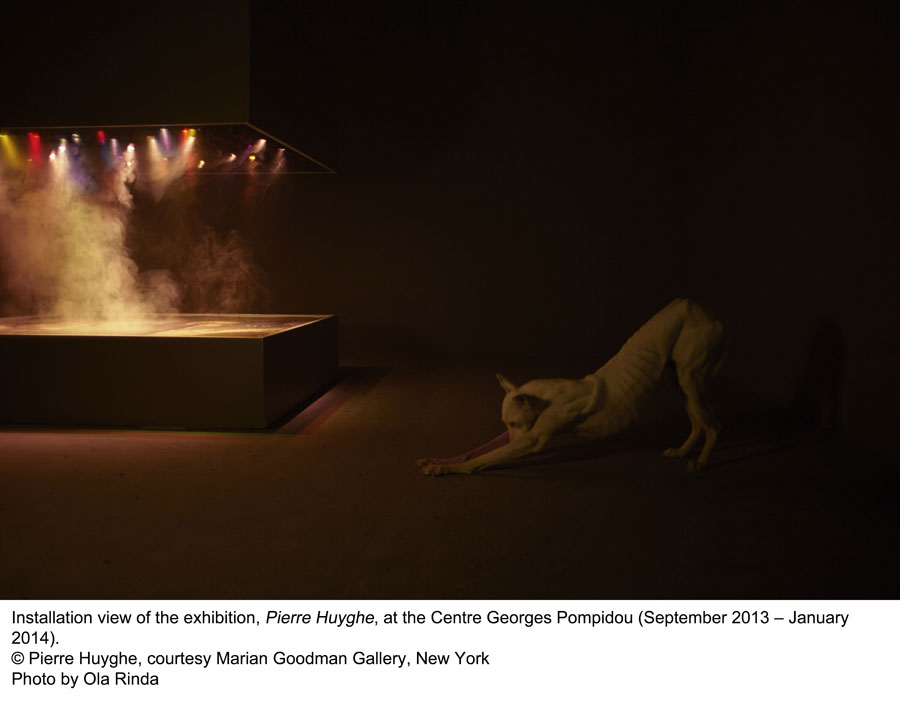