This year the Romaeuropa Festival is back with an even richer programme of events, always interested in building a citizen network of institutions, both public and private, and extend the network internationally.

Once again the Festival has dedicated one of its spaces to Digital Life with fringe events and an exhibition at Palazzo delle Esposizioni, in tune with a digital art that is increasingly hybrid, linking research with trans-disciplinary and multi-media forms. Where are we now? This is the title of this Romaeuropa Festival edition, which stems from the necessity to question the «need to analyse the state of art, contemporary human expression in the artistic and technological fields, on which future trajectories of human evolution can trace their identities». Digital Life represents part of this search, aimed at the visual arts sector, which appears increasingly advanced in comparison to the classic ‘vision’, reaching out, on the contrary, to a multi-sensorial perception. 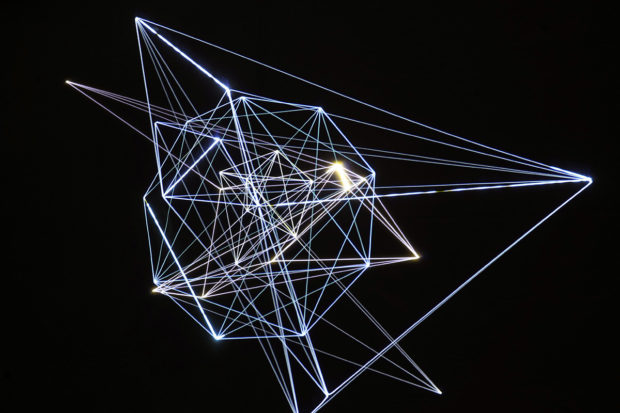 None better than Robert Henke – an artist, performer, musician, engineer, programmer and composer – could be called upon to represent these new hybrid forms of genre and discipline. Henke inaugurated Digital Life with a preview performance at the Teatro Argentina, transforming the seventeenth century theatre into a spatial composition of light and sound for a live performance that, on the one hand, revealed itself as being more virtuous in form than past experiments and, on the other, found its way of adaptation to a ‘classic’ place and appealed to a wider public. 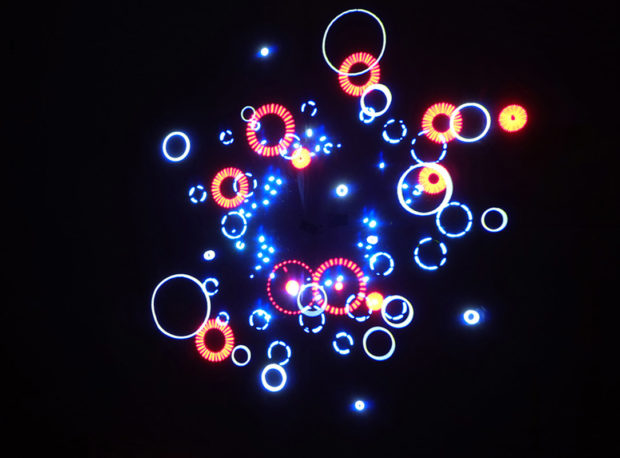 Henke’s research centres on language, that which the artist uses to write the software programmes that animate his performances. «Every symbol, every number, every letter – these all have very specific meanings in computer language» Henke explains in an interview with Chiara Pirri, who accompanied the audience in the room, to describe the role of language backstage and the scene of his performance. In his projects, included Lumiere III – the third development of a project started in 2014 – language includes sounds, symbols and their interaction with the space and perception of the public on the same level. «When I compose» adds Henke in his conversation with Chiara Pirri «I create forms and sounds that produce ‘events’ through interacting with each other. Each event is constituted, therefore, by a sound and a symbol, which are inseparable. These units allow me to manipulate sound and image simultaneously during the course of the whole performance». 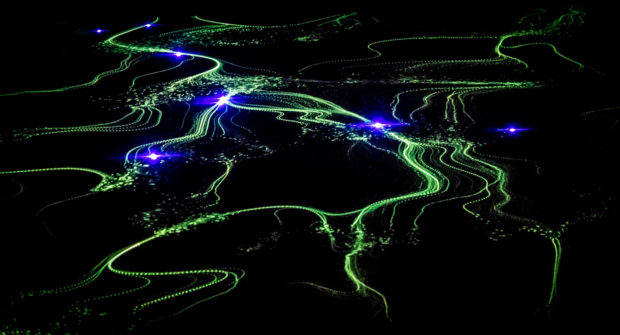 Robert Henke also presented his new installation phosphore, part of the exhibition «Digital Life» currently being exhibited at the Palazzo delle Esposizioni. A UV light produces temporary landscapes on a layer of phosphoric dust. This dust is scattered on the floor of a room where visitors are welcomed with a sound composition that envelops them as if they were in an embryonic state. For this project Henke has written software that simulates processes of erosion, gravity and movement inspired by the fractal geometry theories of Benoît Mandelbrot, the first example of algorithmic art and contemporary Big Data models. Light falls from above, changing the profile of the mountainous landscape and digging virtual canyons, which produce different trajectories with the passing of time. What can be seen is the outcome of a repetition of basic function calculations simulated by the software. The materialisation of the landscape before our eyes is, in fact, an exercise in perception with which the artist plays to lead viewers on a journey in time. What we actually see has taken place two hours before. «With a little help from alchemy and quantum physics, matter acquires memory, translating time into space (…) Movement becomes visible as a two-dimensional object». In this work, as in much of Henke’s research, actual time is compressed, unpredictable and in constant evolution. To decode this, it is necessary to undertake trans-disciplinary research. It also entails being ready for failure, which is what has enabled science and the arts to progress, what the acceleration of technology has cancelled from our perceptive sphere and what Henke reminds us, in his interview, that must be challenged: «In order to be a good artist, you must always be open to failure, tolerate it, trying and retrying until you have reached your aim and this is what scientists do every day». Making time visible, and by so doing becoming aware of the delay in our perceiving it, means that we gain ground on the road to consciousness. Shedding light on the current state of affairs means accepting the unpredictability of events and the need to keep hold of the question in the title: where are we now? Questions and answers will follow at a faster pace, revealing multiple truths, all equally real, emerging from a space that is increasingly multi-faceted and fragmented in multiple universes.