by Ilaria Tamburro
in Interview 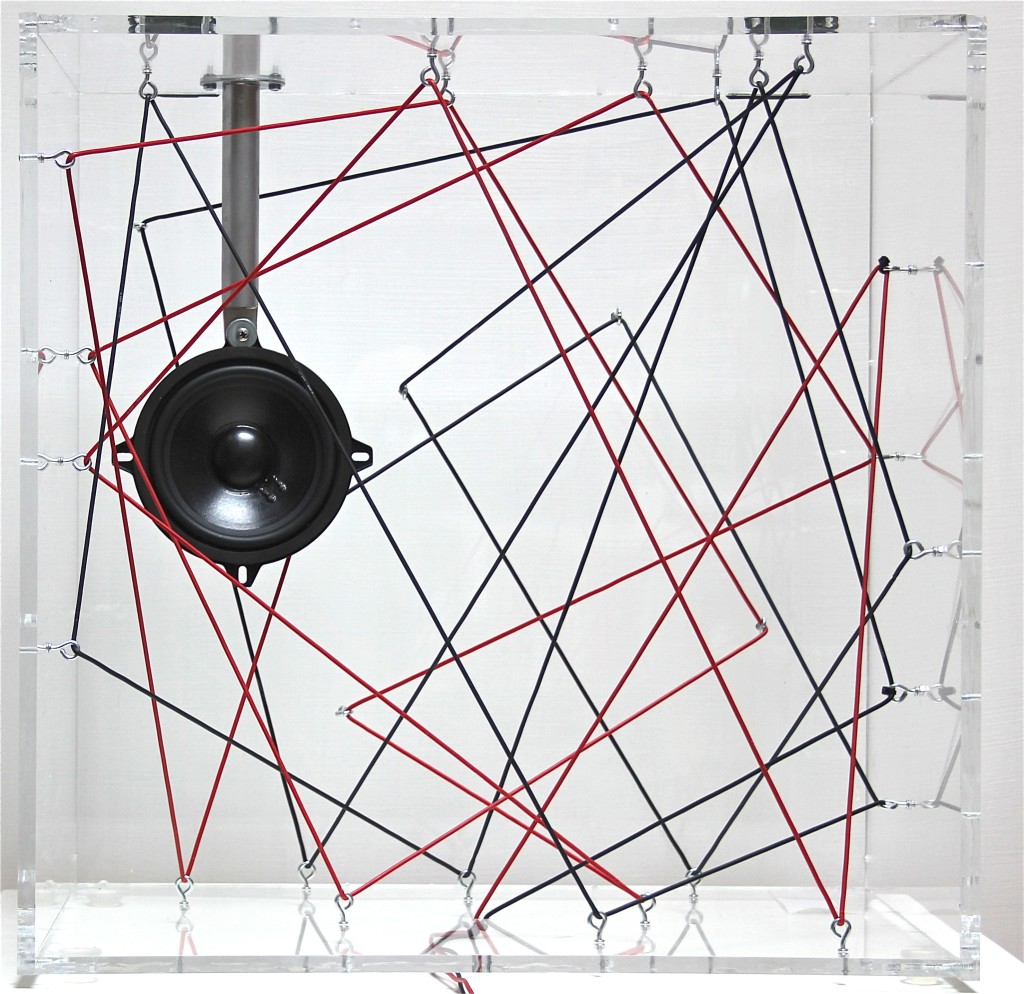 We live in an era in which natural and the artificial exist in an ongoing osmotic exchange. Art and technology are more and more involved in a cultural «crossing over» process. We often believe that technology is nothing but a tool we use to simplify our daily lives and facilitate the «fluid» motion of today’s society, without even noticing that it is the pillar of our entire environment. It determines our perception of it. Paolo Rosa, the artist from the Studio Azzurro group who recently passed away once commented on the issue by sharing:   « I think that the new means we have at our disposal are a way of thinking which can show us the way people see the world: today we see it in a different way. This probably explains why it feels right and useful to combine the artistic experience with new technology: art and poetry can draw an enormous amount of orientation from the above-mentioned ‘way of thinking’ (visual thought)».

Now, more than ever, technology does not only influence artistic creations by contributing the birth of new practices – it also determines its various functions and usage. Digital has produced new artistic idioms by creating a revolution of epochal proportions in the world of expressive means; facilitating the birth of Digital Art, Net. Art, Cyborg Art and Sound Art. Artistic practices that make use of contemporary technology to describe and analyse the present, creating cultural and formal combinations among different idioms capable of interacting with the public in a manner that is increasingly more intimate and intense.

Young Italian artist Roberto Pugliese has been focusing his research on the relationship between humans and technology and between technology and art. He recently presented one of his creations at the Romaeuropa Festival in Rome. The aesthetic aspect has never been an important option in his works. They tend to concentrate mainly upon the ability of the human psyche to perceive and distinguish natural and artificial data. This artist creates interactive sound sculptures that pull the spectator into an immersive sensorial experience. We asked him a few questions in order to better understand the complexity of his work.

Why have you chosen sound as the official language of your art?

I am a trained musician. I graduated from the Naples Conservatory and I’ve always studied electronic music. My teacher and mentor Agostino di Scipio is one of the leading experts in electro acoustics and electronic music as well as being a great researcher in the field of digital sound. I’ve worked on the sound aspect of several art videos and have spent a lot of time at the Fine Arts Academy where I’ve had the opportunity to combine a variety of disciplines with my many interests. The result was one of the very first sound installations.

How does a sound composition come into being? What determines the choice of sounds and the aesthetic aspect of the installation?

When I think of a work, I imagine it visually and «hear» it at the same time. The two parts are inseparable and simultaneous. I tend to mix natural and artificial sounds. Sometimes I produce synthetic sounds that the ear perceives as natural. These two aspects – aesthetic and sound – co-exist in the work’s shape as well, since it is made up of cables and speakers for the most part. These materials are exclusively artificial and they often take on a natural form like a tree or a plant, for example.

The relationship between natural and the artificial is a constant parameter in the study of psychoacoustics; I am particularly interested in analysing the processes of sound perception. I study how the human brain distinguishes and recognizes artificial and natural sounds starting with software created with genetic algorithms or mathematical functions inspired by natural events. Once these are completed, they «live» a life of their own – becoming independent bio-electronic organisms in every sense.

What kind of role and how much importance does the spectator have in the processing of your work?

I am convinced that the most important function of art is communication – whether we are talking about reflection or a concept or sensation. The presence of spectators is essential to my work since it is created for the purpose of making such a strong impact as to totally immerse them in it. By creating an alienating condition, I find a way for spectators to detach from the real environment so they can stop and ponder – asking themselves some questions. I believe that when all is said and done, this is art’s principal role: being able to create moments of reflection that can produce different viewpoints regarding the proposed theme.

What is the relationship between your sound sculptures and space? Are they created with the intention of transforming it?

Usually, my work communicates with space in its attempt to emphasize its architectural particularities. I like creating environments in which the public comes into contact with the work naturally where sound finds a way to move and create different sound perspectives.

Does the installation that you recently presented for Digital Life followed these parameters as well?

The work on display was not a site-specific work. Nevertheless, it perfectly fit the space. Daniele Spanò, who is very familiar with my work, really wanted to include this. He was sure it could have been perfectly integrated. I created it in 2011 with electric cables, speakers and sensors that detect climatic changes in the environment such as the temperature, light and humidity, sending the results to a computer with special software that transforms them into sound – emitting sine waves (tiny sounds) that are diffused in the environment and totally entrance the spectator. 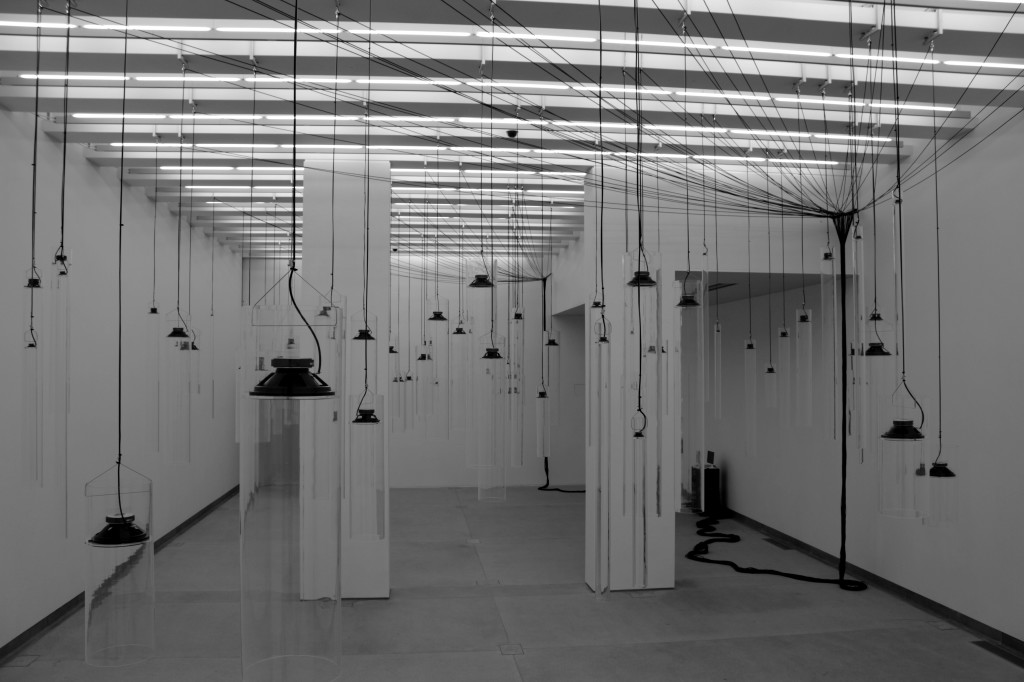 The installation with the speakers coming down from the ceiling supported by assembled cables seems to take on the shape of a large weeping willow tree that emits sound inputs capable of arousing the audience’s senses: in my opinion, this work is particularly emblematic of your quest, emphasizing the usual relationship between aesthetics and perception. Could we affirm that yours is a work of emotional aesthetics?

The fact that I don’t pay any particular attention to the aesthetic aspects of my work is in itself a very decisive aesthetic choice. I don’t think we can talk about aesthetics without talking about emotions. As far as I’m concerned, micro-worlds are created in the space of works. These structures possess oral and visual aspects. I try to create environments in which the spectator’s first response is to ask some questions, but I also try to offer my audience a real emotion.