Born of the meeting between solitary and somewhat anti-social Berlin-based producer Siriusmo (Moritz Friedrich) and high-energy German electronic duo Modeselektor (Gernot Bronsert and Sebastian Szary), who can rock the audience at any festival, SiriusModeselektor, that has just performed at the Spring Attitude Festival, is always a «once in a lifetime experience,» as they themselves point out. Curiosity is running high for an awesome show, «back to back, front to front, front to back, for you, for me, for everyone,» with lighting by visual studio Pfadfinderei, also from Berlin. 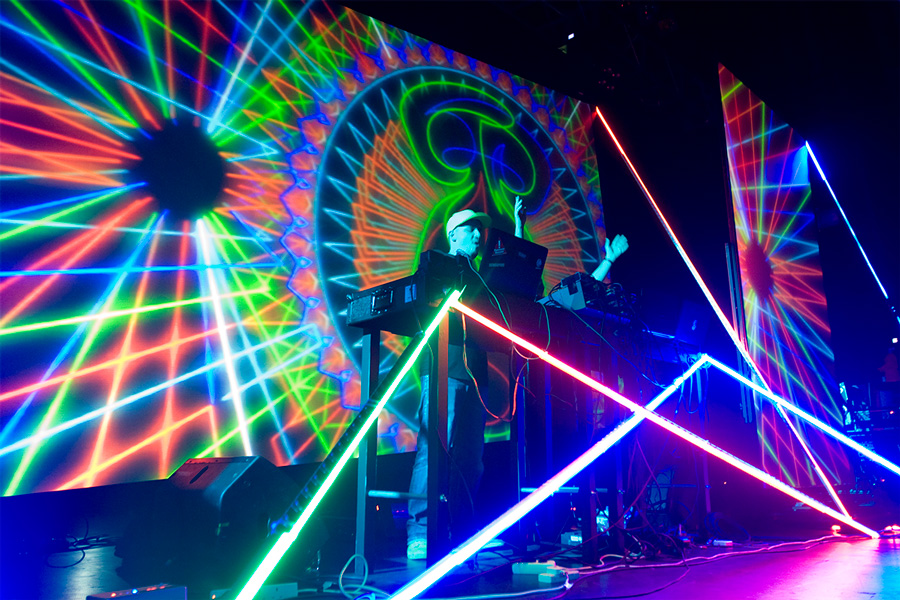 Emotions, hopes and fears in IDM, euro crunk, experimental techno, happy metal, electro house, hip hop, rapcore and electro psychedelic. Modeselektor’s ability to discover producers is well-known, involving them in new experiments to be launched with their two labels, 50 Weapons and Monkeytown.  Founded soon after the fall of the Berlin Wall, the band makes music infused with their own particular political ideology and identity. «Breaking Boundaries» on every level: statutory limitations, professional bureaucracy, categorisation, social prejudice.  This music dissolves boundaries, creates, distorts, recycles and recreates, as if in a jungle.

The fact that this is the favourite band of Radiohead frontman Thom York is a sign of trust and guarantee.

Rich sounds and dense atmospheres, the band received the Resident Advisor’s award for best live act back in 2009.

The «monkey mask» is their signature: man free from superstructure.  This is evident too in the covers of Hello Mom!  (BPitchControl, 2005) and MonkeyTown (MonkeyTown Records, 2011).  In the meantime they have put together two albums, Moderat and II, with the group created with the Apparats.

The world of art is satirised in «Art&Crash»

Music by Modeselektor | Directed by Pfadfinderei | Performed by Fantastic Nobodies); with «My Mosque is My Cathedral» they aim to go beyond the differences between Islam and Christianity: made with director Pfadfinderei, this is an Arabianised electro-techno track, where  visual pop culture blends with Islamic symbols and images

Thom Yorke’s voice vanishes together with childhood, wrecked by the dark and devastating cages in “Shipwreck”

In “Evil Twin”, disguised in their monkey costumes they protest Black Bloc style

highlighting the damaging results of our shaking hands with own our dark side, either unconsciously or naively.  Dent de Cuir is visually beautiful.

Fluctuating landscapes, deeply woven from the human psyche, which in this age of revolution translate as fresh sounds, with a solid base of deep beat and shredded voices.