«Software» at the Jewish Museum

New York’s Jewish Museum of Art inaugurated an exhibit in 1970 which was one of great vision and daring for the time. If it’s true that new perspectives and ideas always require a bit of time before they become accepted and assimilated, the question becomes even more delicate when technology is involved since these machines can display their margin of error and fallibility right alongside their potential. The malfunctions of technological equipment caused great damage to the exhibition’s image as well as to the museum’s financial equilibrium, which was to later face an authentic crisis. The event’s negative reception at the time was completely transformed into great popularity; the echoes of its vision have withheld the test of time. Software has become a genuine reference point and among some of the most cited case studies in what is now prolific literature regarding museum curating when technology is involved.

The remarkable foresight that the statement of such an exhibition entails anticipated the aesthetic revolutions dictated by technology’s impact on art in later years. After Cyberserendipity, which displayed the technological world through its finished products at the ICA (London, 1968) and its 1968 follow-up at the MoMA, The Machine at the End of the Mechanical Age, Software focused the attention upon the calculation system of machines in terms of processing. Curator Jack Burnham presented the exhibit like a kind of investigation of new processing introduced into the cultural field through calculation, exceeding the technological theme in terms of finished products. By applying the concept of programming to art, Burnham traced the parallels that existed between projects based upon communication technology (fax, tele-printer and audio-visual systems) and those which used language as their prime material. It is in practicality that technological and conceptual art found their common ground. This explains why conceptual artists like John Baldessari, Hans Haacke and Joseph Kosuth got involved in the exhibit. Baldessari, an artist interested in the creative use of the word ‘autonomous’ since the beginning of his career, presented his Cremation Piece in this context where over a decade worth of paintings were destroyed and “kneaded” to become biscuits and then packed into an urn in which the memory of their vital cycle of birth and death was entrusted to a bronze plate. 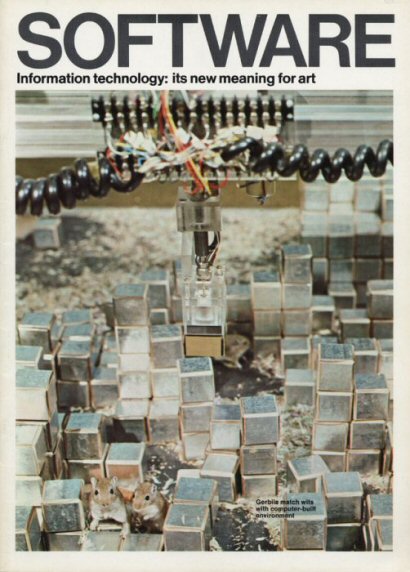 This was the beginning of the exploration of processing: art took its first steps of the adventure into technological devices – interpreted also as a linguistic mechanism – to put the deconstruction of computer language to use by employing the tools of its former function: that of social mirror. It is with this spirit that Levine’s project, System Burn Off, came into being. Its departure point was the declaration that art and information fitted together to create a work, a video portraying the artist in his daily life at his studio, and a taping device that reproduced his telephone conversations and became information about the information of art, the work itself.

The catalogue for the Labyrinth exhibit was one of the very first hypertexts programmed by scientist Ted Nelson for interactive use. Visitors were able to consult the catalogue through stations and special keys that made it possible to select sentences and texts and to create a personalized print-out. The catalogue became a project within a project, where science and art combined in a flexible frame specifically designed in its content –drafted for brief texts. Labyrinth left traces of amalgamation between scientific experimentation and artistic processes, aside from being a photographic documentation that included the stages of the process and behind-the-scenes coverage.

Moreover, Software represented one of the very first exchanges between museums and industry with technical sponsorship from the American Motors Corporation. For a disastrous era, examples like these have proven to be fundamental case-studies in practical terms of guardianship as well as in theoretical terms for the introduction to a vision which anticipated the intertwining of art, technology and life before its time.