White Polka Dot is the site-specific project created by Korean artist Jaye Rhee for the Arshake banner, in which she extends her curiosity and research into the conceptual use of materials, into the relationship between reality and illusion, space and the body for the construction of “real fakes”, until now externalised in video installations, performances, photographs and an artist book. 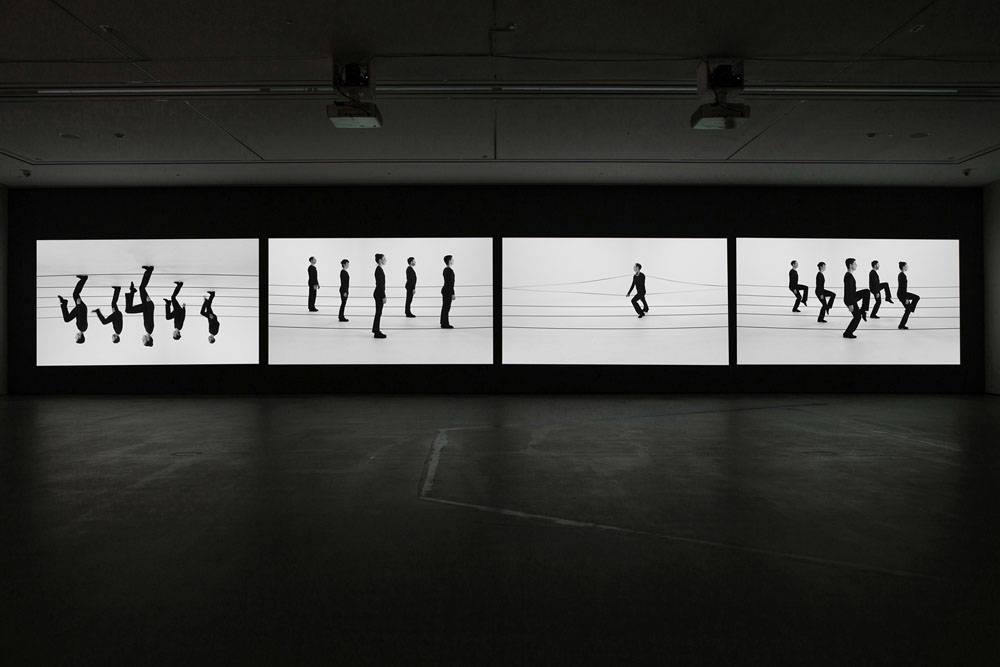 Polka Dot is the name of a fabric which was particularly widespread in England in the late 19th century, recognisable by its pattern of a series of circles, repeated at regular intervals usually calculated in relation to their diameter. Jaye Rhee reconstructs this pattern in an ambient dimension and a three-dimensional spatial format, with an entire wall of holes made at regular intervals and then covered with balloons blown up by an equal number of performers working on the other side of the wall. Filmed by the artist, the spatial pattern proceeds beyond the screen, only to re-flatten itself into the two dimensions of the video, and become diluted on the banner by the temporal fragmentation that splits it into four time periods via the editing process. 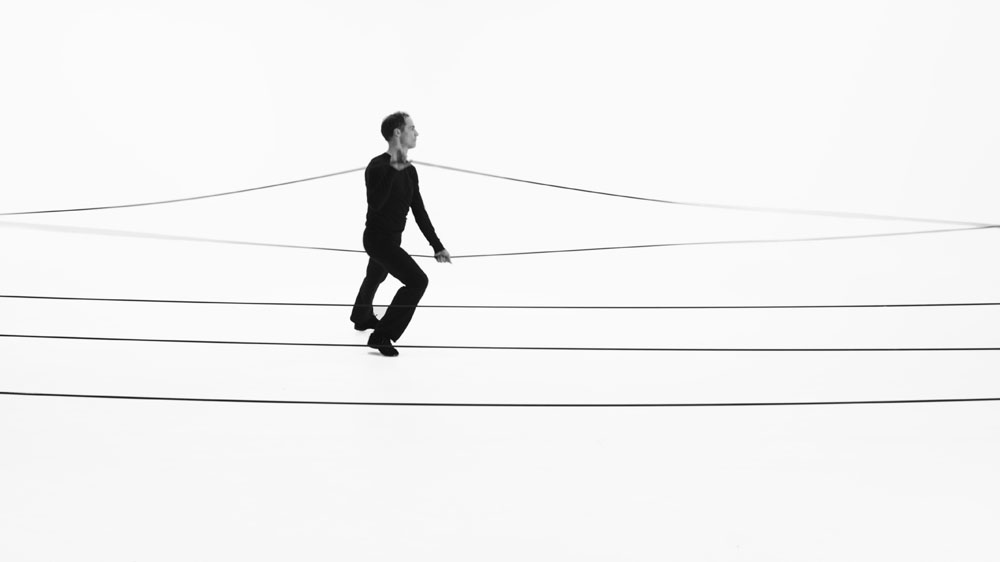 In this way Jaye Rhee extends her research into the liquid world, she adapts it to space, defines it and makes it complicit, just as she does in all her previous works. This is an investigation in which the shifting nature of objects is central to the formulation of a new visual language that teases the perceptual and cognitive capacities, “that complex negotiation”, as Carol Becker points out in a dedicated essay, “between signified, signifier, meaning and artifice”. (C. Becker, Jaye Rhee. Imageless, Specter Press, 2010) 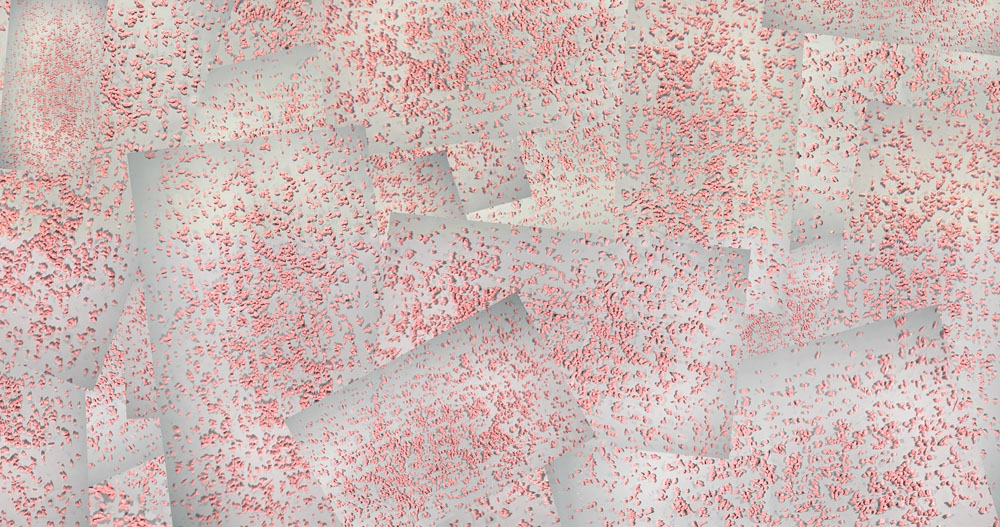 The body is always central in Jaye Rhee’s work. In her Notes (2007) and subsequent The Flesh and The Book, where the performers became musical notes arranging themselves on a stave made of elastic stretched in space, this centrality was clear and explicit; in other cases it remains visible through the traces left by the objects employed, but is equally central. In Cherry Blossoms, for example, the body and its physicality were all contained in the gum chewed and spat from above and – after careful digital manipulation – transformed into a shower of pink flower petals, revered in Oriental tradition as a symbol of peace and serenity. In her artist book, disguised as a box of sugar cubes and containing a series of photos of the same sugar cubes arranged to form words and phrases, the artist’s physical intervention in the setting of the scene is fundamental. 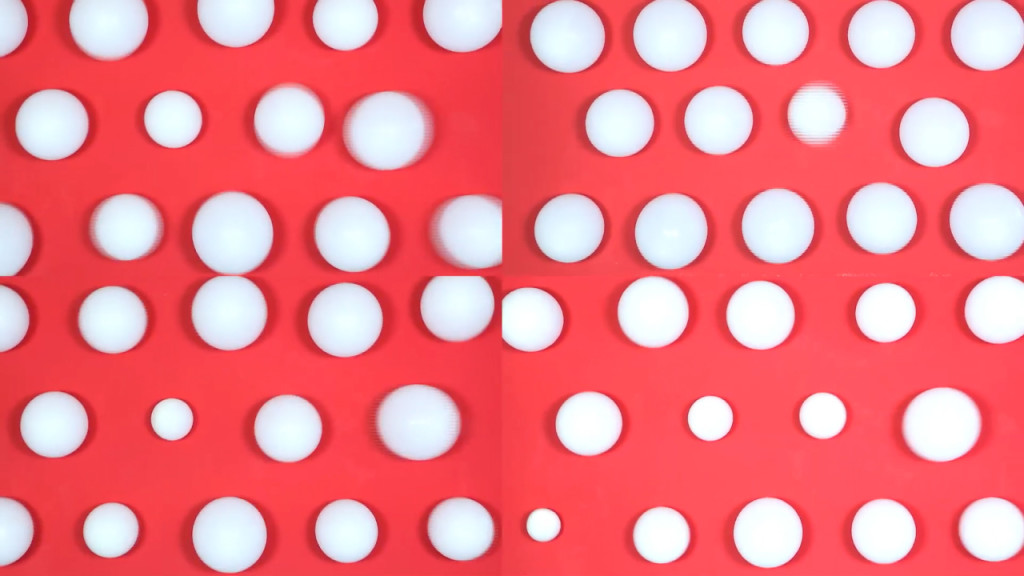 In Polka Dot, the performers inflating the balloons behind the wall are the generative breath that materialises the pattern in space, before it is transferred to the liquid dimension. Popular for children’s clothes, swimsuits, lingerie and – less frequently – for formal dresses, polka dot is, furthermore, linked to dance and often used in costumes for Flamenco. And so the body appears again, this time in the linguistic (visual-verbal) game that links the title to the work, reinforcing its perceptual illusion and widening the field of relations between signifiers and signified, all to be deciphered or left drowsing in a backstage that raises the curtain on the seductive scene of a “real fake”.

Jaye Rhee revels in the space between the ironic and the poignant with work that simultaneously incorporates video, photography, and performance. Born in Seoul, South Korea, Rhee moved to the United States where she attended the School of the Art Institute of Chicago (BFA, MFA). Her work has since been exhibited at various international venues, including Albright- Knox Art Gallery, Norton Museum of Art, Queens Museum, The Bronx Museum of the Arts, Mori Art Museum (Tokyo), Kobe Biennale (2007), The Seoul Museum of Modern Art, DOOSAN Art Center (Seoul), Gyeonggi Museum of Art (South Korea), and the Centro para os Assuntos da Arte e Arquitectura (Portugal). Rhee also participated in the Artists’ residencies of Skowhegan School of Painting and Sculpture in Main (2009), Palais de Tokyo Workshop Program in Paris (2009), Changdong International Studio Program in Seoul (2008), Aljira Emerge Program at Aljira Center for Contemporary Art in New Jersey (2008), Artist in Market Place Program in Bronx Museum in 2005 and Lower Manhattan Cultural Council’s Swing Space Program (2012). Among her awards are the Yonkang (DOOSAN) Art Award 2011, Franklin Furnace Fund 2010, SeMA Young Artist Grant from Seoul Museum of Art (2010), Arts Council Korea Grant for Cultural Exchange 2010 and 2009, and Korea-America Foundation for the Arts Award 2008. In 2010, Spector Press released her monograph Imageless. This retrospective of her oeuvre charts the evolution of her work over a decade and is accompanied by essays that deal with Rhee’s approach to her art by Carol Becker, Raul Zamudio, Sara Reisman and Edwin Ramoran. Prior to its publication, her work had already been featured in Carol Becker’s essay “Intimate, Immediate, Spontaneous, Obvious: Educating the Unknowing Mind” in Buddha Mind in Contemporary Art (University of California Press). It has also been the subject of reviews in numerous periodicals, including ARTnews, The New York Times, Palm Beach daily, Artslant, Artlyst, Art in Culture and Art Asia Pacific Magazine. She lives and works in New York.