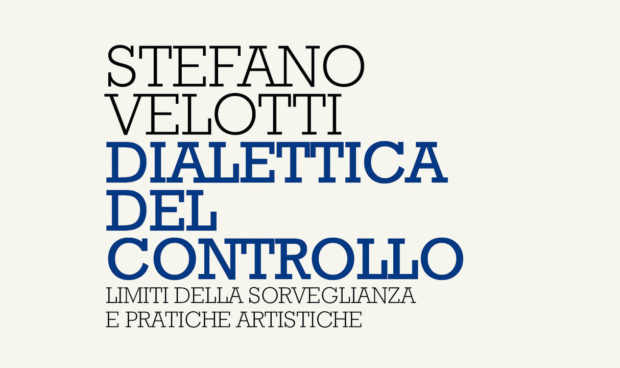 Dialettica del Controllo. I limiti della sorveglianza e pratiche artistiche [Dialectics of Control. Limits of Surveillance and Artistic Practices] is a short essay by philosopher Stefano Velotti, adapted from a conference held on 26 September 2015 at the Metastasio Theatre, which was part of the Forum on contemporary Italian art at Prato’s Centro Pecci. The conversational tone of the conference speech is maintained in the essay and allows a space in which to ‘listen’ to an argument that can be read as a whole; this is an exercise in vision that oscillates between the particular and the universal, crossing genres and times, rooted in the history of Humanity.

The theme is immediately indicated by the title: the ‘dialectic of control’ rather than simply ‘control’, the «connection oppositorum – as the author explains at the start – the connection between the tightest control and the most alarming loss of control»[1]. «Such a connection – continues Velotti – is not cooperation between opposites, but between two poles that have divided. (…) Instead of cooperating, the poles endlessly alternate in the same space and at the same time, occupying the whole scene, degenerating dialectically one into the other»[2]. 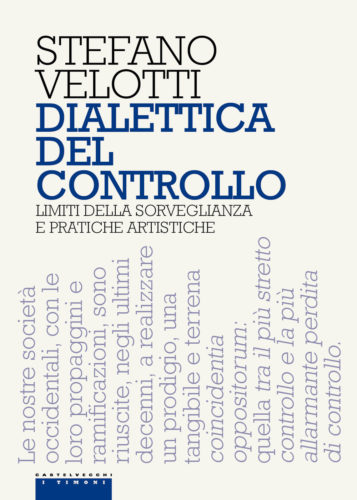 After having examined ‘Surveillance as a natural environment, our digital ‘double’ and the epidemic of valuations’, Dreams of modernity (and our agitated dreamless sleep), circumstance and responsibility, in their respective chapters, Velotti analyses the asymmetry that exists between control and non-control in greater depth, being unable to achieve this in any way other than intentionally (and thus, in some way, controlled). The discussion then expands to include art and culture, their specific position on the value scale, increasingly tied to an ‘economic return, media coverage, number of visitors, subsidiary activities’.

Velotti’s position does not wish to exclude art and culture from the economy, but rather favours «their flourishing or extinction on the basis of other criteria». Now having considered art and its anthropological conditions, the transformation of meaning over time, and after noting the constant need to be in tune with the dimension of meaning as a common denominator throughout history, Velotti focuses on the process of making art, or rather «on the general conditions that are mobilised in artistic practice – be it creation, participation or use», conditions that are rooted in the origins of humanity. Here there is «inscribed a cooperation between control and non-control of ourselves, our world and others». This is how an enquiry on a specific theme, such as that of control, has to be based on a rapport with its opposite, exactly like our human existence. «Making clear that we are already constantly immersed in a world of which we are a part and that simultaneously escapes us, with all its interactions transforming us and modifying the world we inhabit»[3], means that we are given the instruments to observe everything in different ways, be it control, art or culture in general. In other words, we think about different plans and times, their interconnections and interactions, and our existence in the world. Velotti immerses himself inside the artistic practices and re-emerges to highlight the ‘dialectic of control’ that ‘the artistic lab’ helps to identify. This becomes «a useful term of comparison to better diagnose the present or create ‘liberated areas’ that trigger processes through which the lacerated fabric which I briefly mentioned can begin to regenerate[4]». This reading, which was kept as much neutral as possible, is only one of the many possible interpretations that can shape from the multiple hints offered by the essay, diluted in the simplicity and linearity of Velotti’s writing, conceived to be listened to.