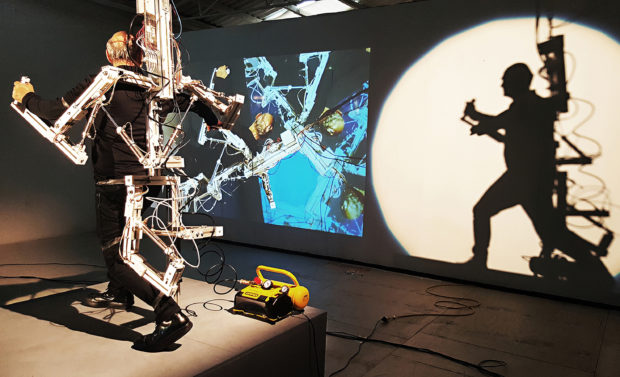 On 2 December, at the end of a season of events at the Romaeuropa Festival and within the framework of Digital Life (still ongoing), Sterlac took part in a public event at the Palazzo delle Esposizioni. Sterlac was in conversation with Massimo Bergamasco, an expert in robotics and Director of the Institute of Communication, Information and Perception Technologies (TeCIP) at the Sant’Anna School of Advanced Studies in Pisa. Professor Bergamasco introduced his own research in robotics and spoke about his project Museum of Pure Form, a travelling museum with robotic arms that enable users, in various locations, to see sculptures in 3D through an optical interface. Bergamasco also explained, as someone creating programmes and technological extensions for medical use, how his own interest extended to art, elucidating how these could also be used in other sectors. At the end of Bergamasco’s talk, Sterlac’s work was introduced, anchoring it to reality and reassuring those who still felt unsettled by the provocations staged by the Australian performer, whose visions anticipated current reality by a number of years.

Sterlac then took the floor and spoke about his work, how throughout his entire life he had used his own body to experiment and demonstrate possible ways of technological expansion. Sterlac’s Third Hand, a robotic limb added to his arm, moved via controls sent by his abdominal or leg muscles. In Fractal Flesh other people moved his body by stimulating his muscles by means of a touch-screen interface. In Stomach sculpture he inserted a device based on micro-technology inside his stomach, while in Exosckeleton his body and its functions were extended to a gigantic six-legged robotic exo-skeleton. These were all ways of exploring and experimenting with augmented bodies, after having ‘emptied’ the body through his extreme performances, involving hooks tied to the skin and being lifted from the ground to render himself obsolete, absent, a simple sculpture. 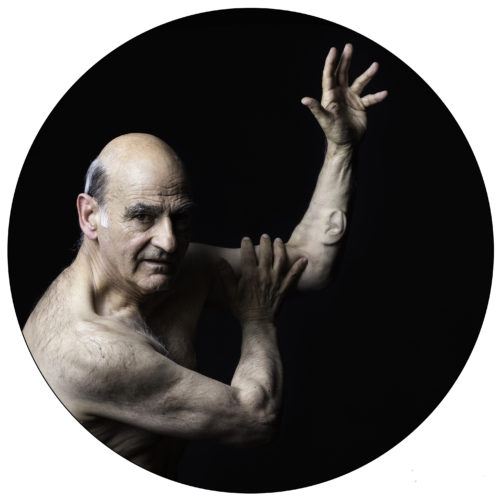 Extra Ear was a work that engaged him for decades and captured the attention of the media. In this piece the technological extension was added to the ‘soft’ organ, a cartilage prosthesis initially intended to be placed on the head, close to the ‘natural’ ear, but later moved to the upper arm for medical reasons. Extra Ear assigns an extra function to the anatomy of the ear, that of emitting sounds rather than receiving them; the ear is connected to a modem and laptop to transmit radio sounds and function as an Internet antenna, thus becoming an anatomical extra and a corresponding technological ear piece.

«The body becomes a nexus or a node of collaborating agents that are not simply separated or excluded because of the boundary of our skin, or having to be in proximility.» Sterlac explained this in an interview with Jens Hauser, during an important exhibition on the theme of «Ski-interfaces» at FACT in Liverpool. «So we can experience remote bodies, – continued Sterlac- and we can have these remote bodies invading, inhabiting and emanating from the architecture of our bodies, expressed in the movements and sounds prompted by remote agents».

The questions Sterlac asked himself and raised with his audience thirty years ago have unintentionally gone from being science-fiction topics of conversation to concrete manifestations of everyday life. We insert ourselves in this investigation, which for Sterlac has never ceased, when “screens” are superimposed on the skin, becoming interactive and producing images with a power we cannot yet imagine. While flesh becomes obsolete, objects become intelligence. «The body – Sterlac makes clear – is an object that requires re-imagination».

Today technology has made progress and even Sterlac’s Extra Ear reacquires its ‘vital emission’. The microphone, which was placed in his additional ear and removed because of a serious infection, will be reconnected in 2018, in collaboration with a group of bio-hackers in the United States. 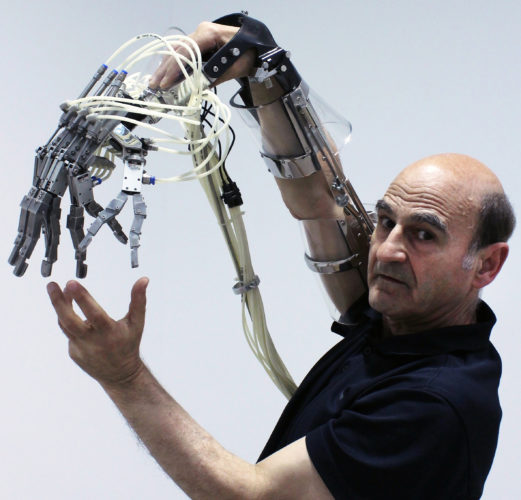 The discussion between Sterlac and Bergamasco highlighted the complementary features of some subject matter and fields that from artistic abstraction find themselves in a reality that is increasingly ‘made of flesh’ and today gradually becomes ephemeral.

The eighth edition of Digitalife, a section of the Romaeuropa Festival dedicated to new technologies and digital art, is still taking place at the Palazzo delle Esposizioni. This year’s edition, together with Where are we now?, the macro-theme of this 33rd edition of the Festival, was conceived with the aim of encouraging a reflection on the fragility of representations of reality, which are as deceptive as the virtual illusions that deform them. As always, Romaeuropa Festival is committed to developing a network of institutions, such as the Fondazione Giuliani connected to the Biennale of Moving Images (BIM) of the Centre d’Art Contemporain in Geneva and the Nomas Foundation, which created a youth project with KizArtL’ottava edizione di Digitalife, sezione dedicata alle nuove tecnologie e all’arte digitale nell’ambito del Romaeuropa Festival, per questa edizione dedicata a Where are we now?, è ancora in corso a Palazzo delle Esposizioni, quest’anno realizzata con la collaborazione e il sostegno di un network di istituzioni locali, come la Fondazione Giuliani, legata alla Biennale dell’Immagine in Movimento del Centre d’Art Contemporain di Ginevra, e la Nomas Foundation.