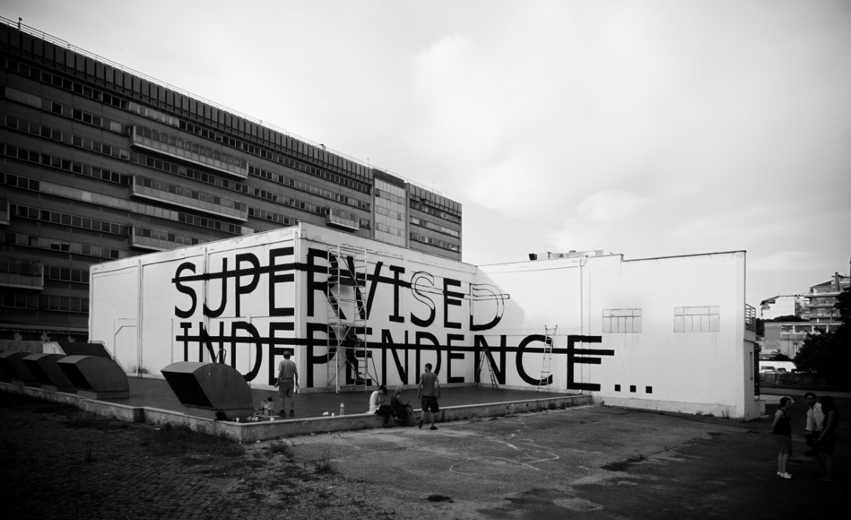 The repeated presence of censor bars and ellipses are used to affirm and retract each of the artist’s works. They are not there to contradict, but to express. They tell of the close tie that exists between French artist Rero (on exhibit for the first time in Italy) and the analysis of the social context in which he lives. This concept clearly emerges in the Supervised Independence exhibit hosted at Wunderkammern.

After having worked in London as a graphic artist, Rero understood that the mechanical nature of the actions performed at his job were not suited to his artistic aspirations. He then decided to dedicate himself to his art completely by creating his very own idiom which combined his new identity with IT technical terminology as applied to art. 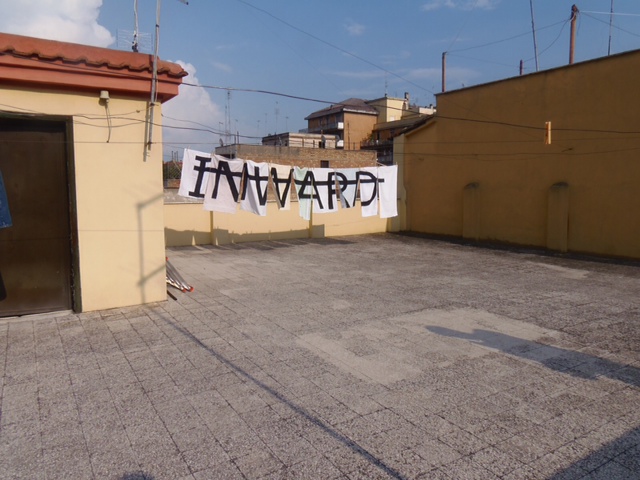 For example, in one of his books for the E-book series, he used ancient books by Italian authors to take screenshots to create a conceptual rapport between the image and printed books.

His work, through the use of words and his self-censorship, attempts to encourage reflection on issues while denouncing controversial themes like religious hypocrisy, the loss of individual and social memory, discrimination against homosexuals. He introduces himself to the «reader» in symbiosis with the «place», intended as exhibit space as well as a geographic «place» – Rome, in this case.

The deep understanding of Italy’s cultural and political history from its origins to the present day is obvious in every work on exhibit in Rome. This knowledge is made clear in the tale of Geta and Caracalla (Geta was murdered by the hand of Caracalla who, after the assassination, ordered his brother’s name to be removed from all inscriptions) and in two 19th century authenticated documents. The two certificates dating back to 1898 and 1899 from the Italian Kingdom’s national debt were elaborated and converted into works of art. They become very powerful tools of protest, inviting spectators to take a look at the past in order to reorganize and restore the present. 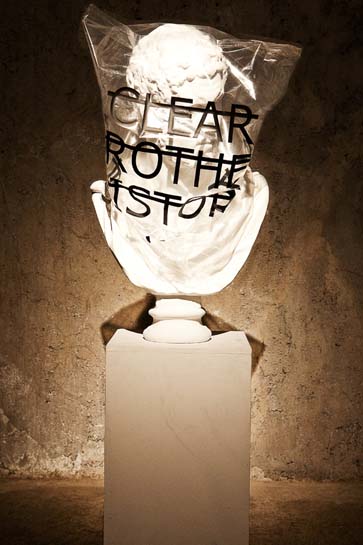 We see three simple words on the head and shoulders portrait of Geta: clear, brother, history (the reference to clear browser history is obvious) placed above the work and his damnatio memoriae put into act by his brother Caracalla. Rero emphasizes how important the presence of each and every one of us is in history and how easy it would be for us to be deleted from the past by the will of the emperors. Today by pressing the «delete» button.

The artist is also questioning himself about the transience of material and the importance of safeguarding our natural and cultural heritage. This heritage has been handed down to us since the remotest of times and our responsibility today is to hand it down to our own descendants.

In this case, material becomes a metaphor, yet the undisputed protagonist of the illusion of the eternal nature of a work of art. That which appears to be a fossil waiting to be discovered is revealed as polystyrene – thus confirming that petro will replace the natural elements as our artistic heritage, depreciating the very concept of material itself. 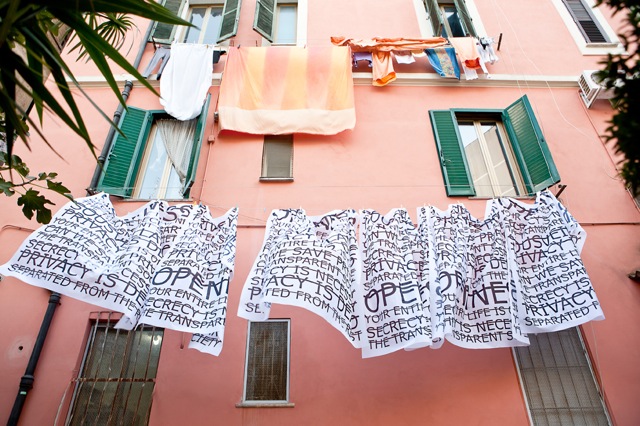 Another essential theme is linked to the concept of privacy, something we are deprived of nowadays. In the work I panni sporchi si lavano in famiglia (loosely translated as «Don’t wash your dirty linen in public»), the artist places a rudimental wooden drying rack with white towels on it in the middle of the gallery. The towel, being symbolic of privacy, is placed in public view to tell of and deny our intimacy with an alternation of different sentences in Italian and English.

The enigmatic style of Rero’s art forces the spectator to ponder the issues. The conscience of those looking at his work vibrates while observing his art. The power of his self-inflicted censorship drives us to ask ourselves about the true meaning of the artist’s intentions. Such irony and skill at calling himself, ideas, material and art into question is so irresistible that no one can remain indifferent to them.