This symposium  is dedicated t0 the 30th anniversary of Jean  François Lyotard’s exhibition at the Centre Pompidou in 1985, entitled Les Immatériaux. The exhibition aimed at demnostrating the emergence of a new materiality produced by the advancement in telecommunication technology. The prefix -im» announced a break from the modern conception of material, language, body, science and art. The exhibition showed how the desire of modernity produced a negation of itself and passed to a new cultural form which Lyotard named postmodern. The exhibition was hence also an inauguration of postmodern. This symposium aspires at tracing the historical discourse stemmed from the exhibition and in the intellectual me lieu of the late 1970s and early 80s that put art, science and theoretical reflection into question, and at reflecting on the new material conditions brought up by digital technologies in the last 30 years. 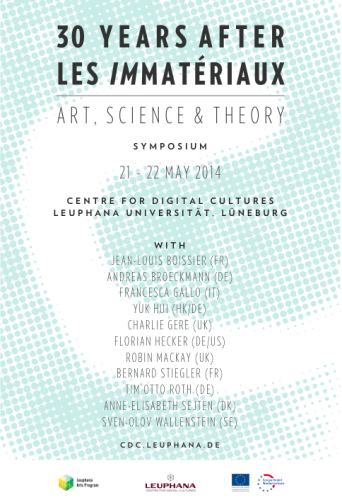 If Les Immatériaux proposed a new sensibility towards materiality, and if this sensibility demanded a new response from art, science, and theory, today,. years after the milestone of the postmodern, we would like to ask what kinds of sensibility and response are appropriate towards our current material condition? For some thinkers, the modern could be seen as the celebration of the abundance of energy and material (Sloterdijk 2004) which produced a spleen of the obsolescence of history. We can also understand the postmodern as the celebration of disorientation and uncertainty as well as a second kind of melancholia arose after the energy crisis and financial crisis (Bourriaud 2009). Culture needs to respond to the crisis generated in itself (Greenberg, 1979), although this response is always ambiguous or pharmacological (Derrida 1972, Stiegler 2011). Thirty years after Les Immatériaux, we argue that the postmodern may be also a symptom. On the one hand, the development of aesthetics in life-style has surpassed the commodity fetish described by Max, a process that Frederic Jameson (1991) called «the logic of capitalism», on the other hand it has created a new sentiment of loss destruction of difference between rural and urban work and play, functionalism and perception, art and art market, biopower and biopolitics. One cannot identify exactly where one is, because the exact location of places has been erased bu the globalization, which is driven heavily by marketing aesthetics and economic growth. The postmodern presents itself as a symptom of our time.

But, in fact, today a new sensibility is affecting scientific progress, globalisation, social networks, as well as wars, the Occupy movement, global warming, and financial crisis – all of which are brought to our eyes and ears via optical cables and digital gadgets. Our hypothesis for the symposium is the following: if modernity designates a will of mastery, and postmodernity celebrates the sense of uncertainty and disorientation, then we demand a new vision of orientation, a re-orientation. The word re-orientation has two meanings here. First, with regards to the historical relation between West and East, we can observe that this relation has been further distorted by globalisation and modernisation. For example, Asian countries are the copy-cats of the West, and this entails a dis-orientation in a geo-political sense. Something similar can be said for the search for a God (Heidegger 1967) or for Janapese Zen philosophy (Lyotard 1987) meant a remedy for the West’s own intoxication. Re-orientation is also an effort ot produce a dialogue that has never taken place, instead of what has happened with political conflicts and economical exchanges. Second such a re-orinetation produces new discourses of human progress, of aesthetics, of technologic development, that moves away from the «post-» status and includes postmodern and post-human, from the second death of man to a new vision in art, science and theory. The symposium invites scientists, artistis, and theorists to participate in two days of discussion and performance (from the press release).