The Coming of New Media # 2 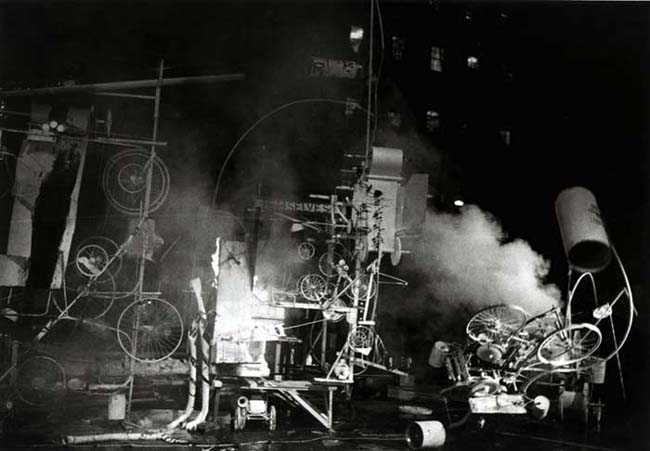 The ingenious activities that drew the aesthetic horizons of the early 20th century spilled over into the second half of the century, involving art with increasing urgency in the awakening of an ergodic approach whose multidirectional nature was determined by the factors inherent to the centre of electronic research and discovery as well as by the factors inherent to the expansion of multiculturalism, post-colonialism, decentralisation and globalisation[1]. This atmosphere has been confirmed by the corrosion of time and space, presenting the art world a series of creative options that experiment with the various divergences of software and hardware with the knowledge that such an instrumental outlook tilts its intervention into the area of data manipulation. 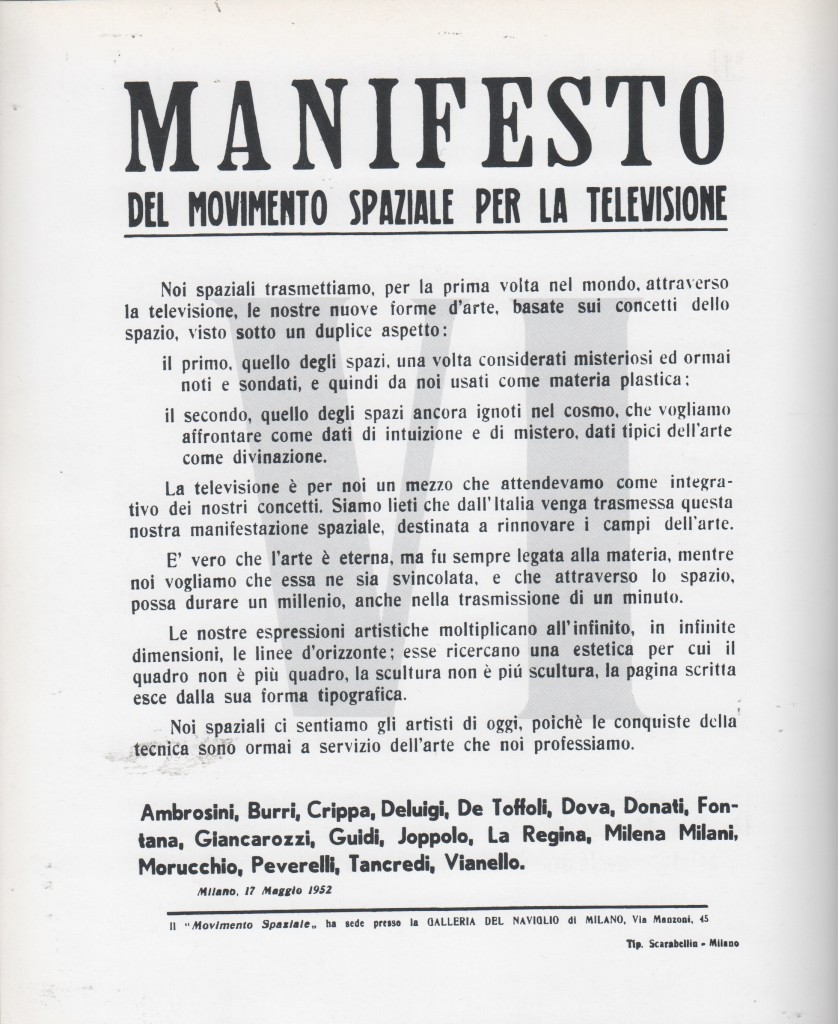 Even if it is a paradoxically isolated case, the Manifesto del movimento spaziale per la televisione (Manifesto of the spatial movement for television, 1952) published by Lucio Fontana, is the first example of a focus upon the landscape of television – an overview that caresses the progress of Futurism – and considered by the artist as a new artistic technique and an authentic expansion of creative possibilities. We read the following in the Manifesto: «We spatial artists are broadcasting our new art forms based upon the concepts of space for the first time in the world via television […]. We spatial artists feel that we are the artists of today since the progress of technology is now at the service of the art we practice […] we believe that television is the means which we have been waiting for in order to complete our concepts»[2]. 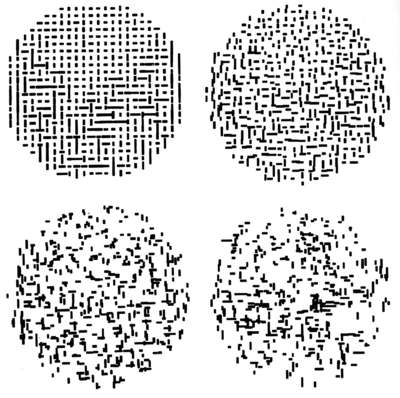 From the second half of the 1950s and throughout the following decade, a multiple and ambiguous pollination was observed that was not limited to creating hybrid works. It deepened the relationship between art, technology and perception and at times it developed into a bona fide tri-polar norm. It began with the initial Tv Dé-coll/age (1958) by Wolf Vostell, with the international flair of the Tendencije coming from Zagreb in 1961[3], Nam June Paik’s Exposition of Music-Electronic Television (1963) which was also included in the 1965 work Café Gogo (the first artistic video shot with a handheld camera), Computer-generated pictures produced at New York’s Howard Wise Gallery in 1965 as well as the Generative Computergrafik organised at the Technische Hochschule in Stuttgart two months prior[4] – without omitting the various computer graphic experiments carried out by science artists of the calibre of Mike Noll[5], Leslie Mezei, Charles Csuri, Gyorgy Kepes, Leon Harmon and Kenneth C. Knowlton, Ruth Leavitt (father of the Artist and Computer, 1976) and a whole series of important events or projects by Robert Cahen, Ed Emschwiller, Gary Hill, Bruce Naumann, Jeffrey Shaw, Lillian Schwartz, Woody and Stena Vasulka, Bill Viola and many others. An advocate of this art-technology-perception was Robert Rauschenberg who founded a successful partnership with physicist Billy Kluver in 1963. Kluver was the laser researcher at Bell Labs who assisted Jean Tinguely with Homage to New York (1960). To promote the artist-engineer twinning and to affirm the collaborative potential[6], Rauschenberg and Kluver co-produced 9 Evenings: Theatre and Engineering in 1966 for New York’s Regiment Armory. This polyphonic project involving forty engineers and ten artists presented an ambitious interdisciplinary undertaking for nine evenings – expanded and consolidated in 1967 (more specifically while Gyorgy Kepes began a similar experience at the Center for Advanced Visual Studies at MIT) with the E.A.T. (Experiments in Art and Technology) Foundation, an interdisciplinary organization that involved the participation of such illustrious artists as Hans Haacke, John Chamberlain and Robert Whitman as well as the collaboration of scientists from prestigious corporations like AT&T and IBM (to name just two), ready to defend the various strategies at the base of a fruitful relationship that exists between various forms of human creativity. 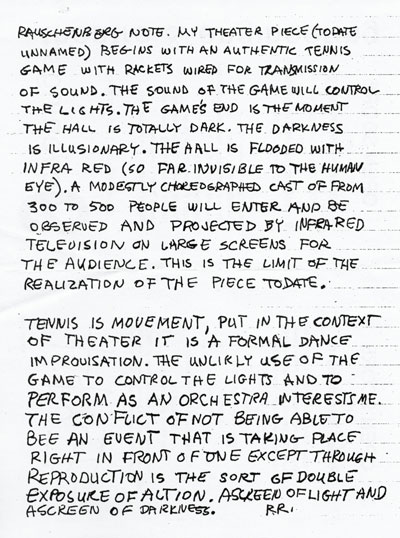 Artists today are the beneficiaries of these important and indispensable experiences, the beacons of electronic archaeology and interactive art[7], and are now spokespeople of a diffused craft and a democratization that bypass conflict in support of a integrative and multidirectional programme  which allows for the choice to exercise aesthetic influences on new devices at our disposal and to  «artfully astonish the ingenuity of the programme» and force the new device to «do something it was not built to do»[8].

You can visit here The Coming of New Media #1

[1]    On this subject, the influential essay by P. Weibel: Globalization and Contemporary Art, in H. Belting, A. Buddensieg, P. Weibel, The Global Contemporary and the Rise of New Art Worlds, published by ZHM | Center for Art and Media Karlsruhe (Germany), The MIT Press, Cambridge (MA) – London 2013, pages 20-27.

[5]    For a broader view of the work of Noll, his experiments, published works and theories of computer graphics, please consult his website http://noll.uscannenberg.org/ and Database of Digital Art – Compart Center of Excellence Digital Art (http://dada.compart-bremen.de/item/agent/16).