Karma Fails - Meditation is Visualization at the Romaeuropa Festival

For DIGITALIVE 18, the section of the Romaeuropa Festival dedicated to algorithmic performance curated by Federica Patti, Milanese duo The Cool Couple involved the public in a ‘guided meditation’: Karma Fails – Meditation is Visualization. Founded in Milan in 2012, the duo consists of Niccolò Benetton and Simone Santilli. Their artistic research focuses on the frictions generated daily in the relationship between people and images, which The Cool Couple render visible using the most disparate tools – from photography to electrostatic cloths, from Chinese cover bands to meditation – already featured by them in the past. Their work is often combined with pedagogy because, as they themselves say, this “generates good karma”. They are founders of the cover band Rui & the Rainbow Dragons, and members of  POIUYT, a platform dedicated to the research of images that aims to fostering a critique attitude towards this language that is key to contemporary culture. 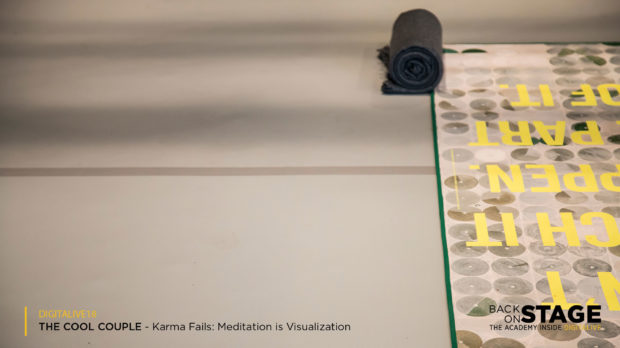 For Karma Fails – Meditation is Visualization, the public entered a space in Rome’s Pelanda, where the calm, friendly voice of a performer – and collaborator of the duo – guided them in a relaxation of body and mind, in preparation for viewing a series of images and situations which trace the various stages in human progress – and our role within it – from the 19th century to the present day. 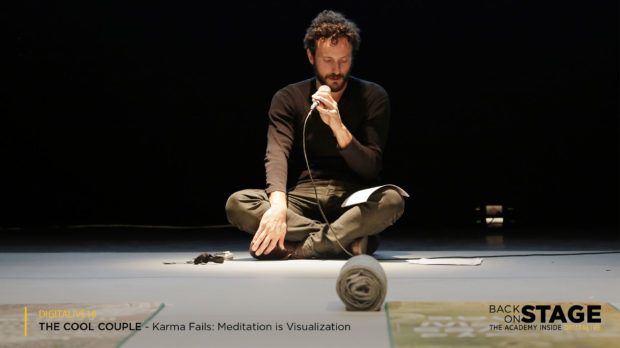 “Breathe in deeply”, says the performer at a certain point. “The wheat has given way to sand, which rises in whirlwinds and dances around you. A sandstorm that advances inexorably. You can turn and run. But the wall of sand is much faster than you. It’s the blast wave of the future. Breathe out”. And so meditation becomes ‘visualisation’. 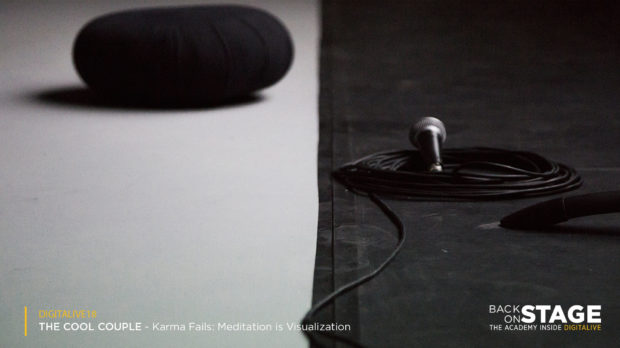 The artists have used this previously, on this premise: “We westerners practise meditation after having selfishly ‘freed’ it from the pacifist ideology and New Age nuances that initially characterised it. Today, the discipline is frequently associated with the use of expensive high-tech accessories with minimalist design, and at the end of the day it is no more than a selfish ideology of wellness. Individual productivity and healthy living are status symbols, with an ever-increasing number of people busy smiling at life while the world burns. Capitalism has appropriated meditation to turn even this into a source of profit, and thus an ancestral practice has become the natural development for an interconnected society”. (The Cool Couple)

From 5 to 7 October, the performance/meditation, lasting some 40 minutes, was repeated three times, transforming an area of the Pelanda centre into a place of reflection for 15 people at a time.