«The Future is Now»

Arshake is pleased to publish the first of two parts of the essay  by Valentina G. Levy, of The Future is Now, review of the exhibition, curated by Yi Soojung, dedicated to new media art in Korea, and currently on show at the MAXXI Museum in Rome. The writing crosses new media art throughout the single works and within the wider context of the socio-political frame in Korea, the one from where it stems the interest towards new media art that has been increasing growing. The exhibition is divided in four thematic and chronological parts: 1) The Pioneers of New Media Art in Corea; 2) The Combination of Art and Technology: The Time of Development and Experimentation; 3) The development of Internet and New Media Art, and 4) The Creative Culture of the Digital Era. This first part of the article outlines the historical frame of Korea and it continues with the analysis of the first two sections of the show. 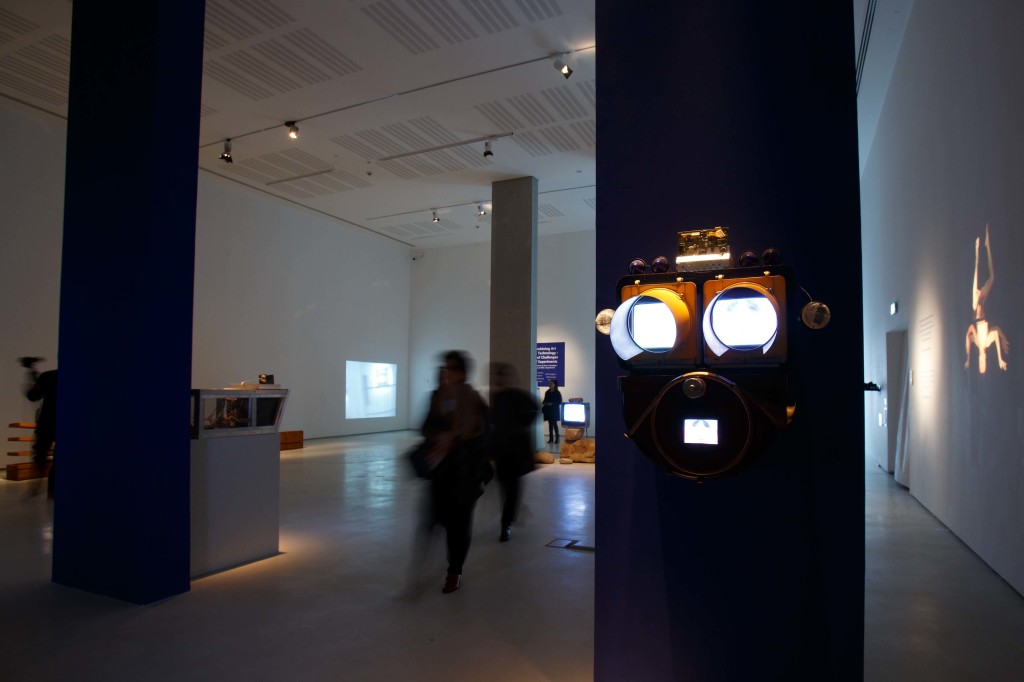 «The future is now», the famous phrase of Korean artist Nam-June Paik (1932 – 2006), is the title of the exhibit being hosted at Rome’s MAXXI Museum until March. This group exhibition was conceptualized by the MMCA National Museum of Modern and Contemporary Art in Gwacheon-si, Seoul. The work of about twenty artists of different generations present an overview of the evolution of the New-Media Art movement in South Korea – from its origin in the 1960s to the present through a 4-stage chronological and analytical itinerary. 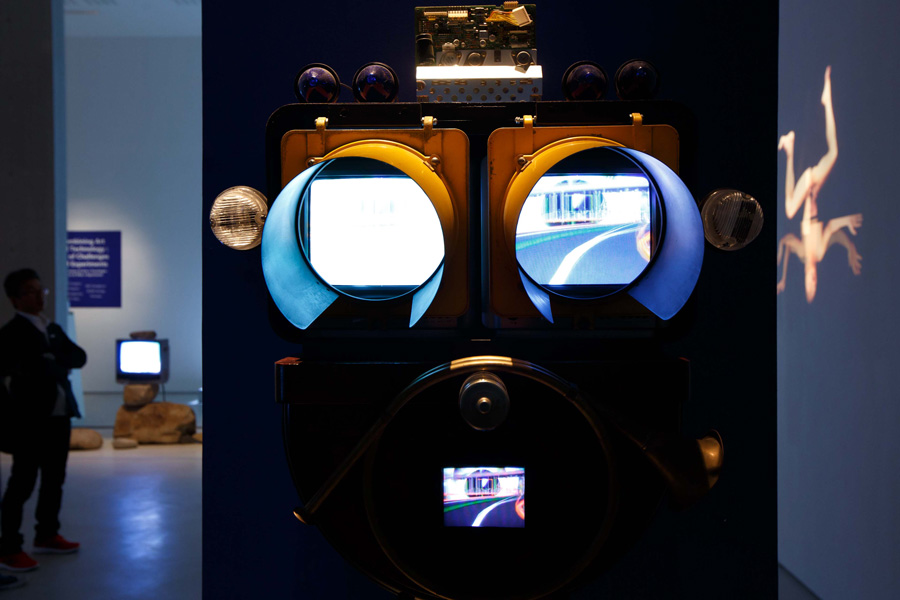 Situated between two great cultures (Chinese and Japanese), Korea has been a joining link for centuries between the Japanese archipelago and the continent of Asia. Interventions of external forces have dramatically determined the course of the Korean peninsula’s history for the past 150 years. Japan (which was already at war with China) occupied the country in the late 19th century, terminating its independence. Korea’s division into two independent states, as we know it today, officially took place in 1948 when the Soviet-backed dictator Kim-Il Sung proclaimed the birth of the Democratic People’s Republic of Korea in Pyongyang thus declaring his rejection of a US-backed state created below the 38th parallel whose capital was Seoul. It was at that very moment that the Asian peninsula underwent a political and (most of all) ideological scission: North Korea cut itself off completely from the rest of the world – remaining immobilized in an eternal “present” – to the point that its citizens are living in surreal conditions to this day (individual lives are articulated by collective rhythms imposed by the regime) while the nascent Republic of South Korea began its rapid climb towards innovation and development. 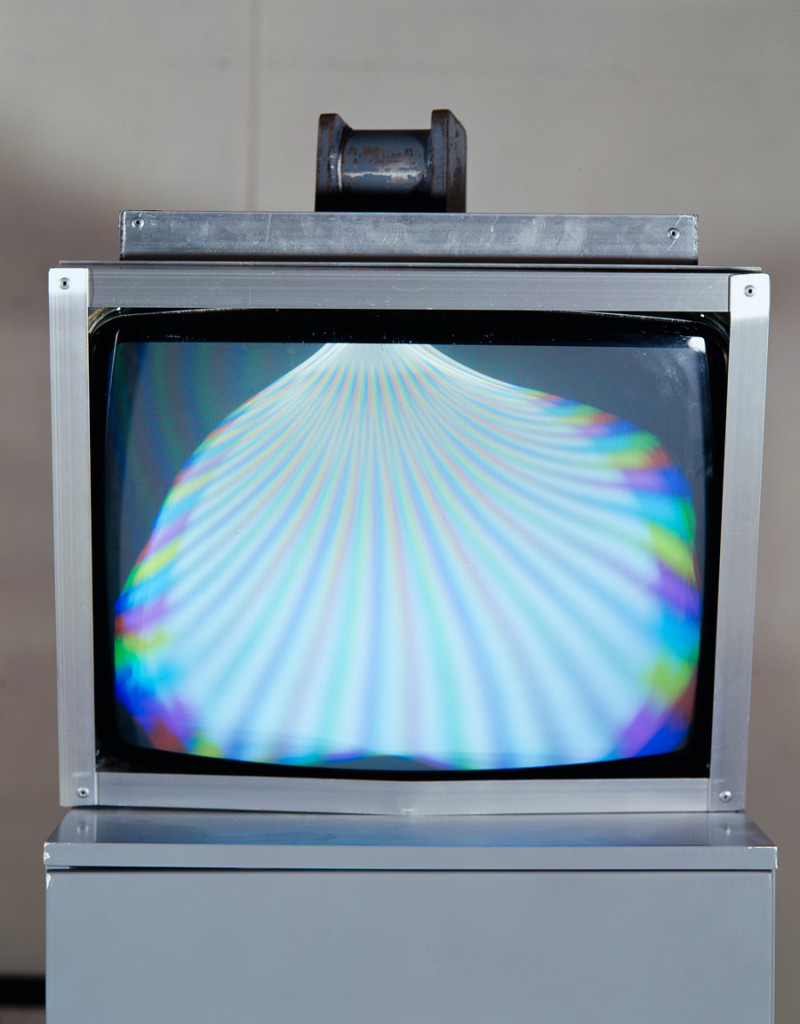 Fascination with new technology began to manifest between the 1960s and 70s through the artistic quests of talented artists working abroad who had begun to use television as an object of study and a tool for research. The first section of the exhibition presents works by pioneers which include Nam-June Paik, Hyun-Ki Park (1942 – 2000) and Duck-Jun Kwak (b. 1937). 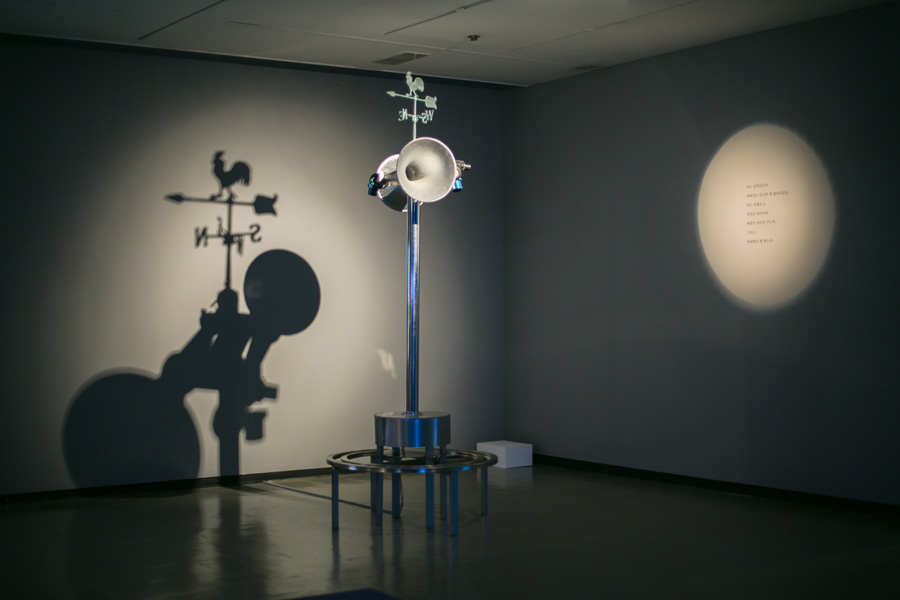 More specifically, Magnet TV deserves a special mention among the most interesting works on display in this section. This work was one of Paik’s very first experiments during the early 1960s and was presented during the Korean artist’s first solo exhibit in the United States in 1965. Magnet TV is an installation made up of a television whose magnets and cathode-ray tubes are manipulated in such a way as to display abstract images on the screen. The spectators at the time were invited to interact with the work by moving the tubes and contributing to the alteration of the images, creating constantly changing patterns. 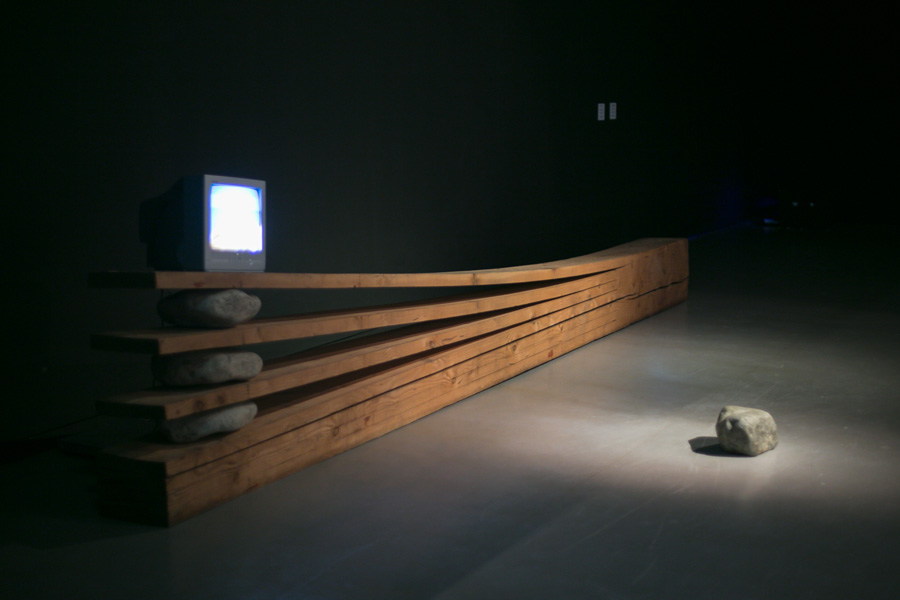 Also on exhibit in this section are two works by Yunk-Ki Park, whose artistic exploration was based on the association of television with natural elements like stones, water and wood in an attempt to experiment with the possibility of rejoining the natural with the artificial. The results were installations that could almost be defined as techno-Zen gardens. 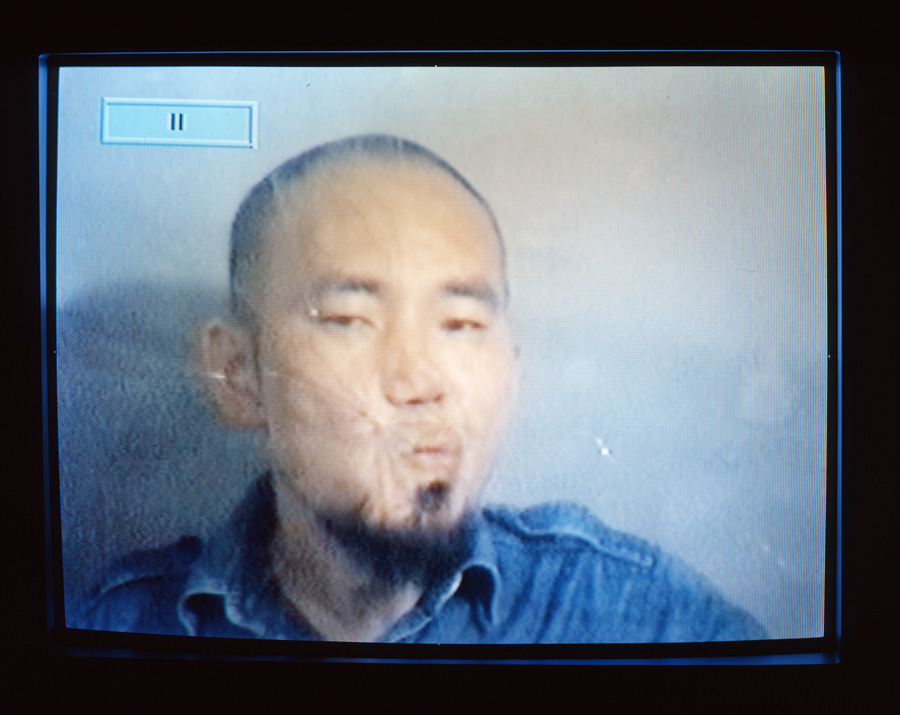 The second section of the exhibition, Art and technology: an era of challenges and experiments, deals with the 1980s and 90s, a turning point in the manner in which New-Media Art was conceived and acknowledged in South Korea. This 20-year period was crucial to the country’s contemporary history. Following the assassination of President Chung-Hee Park (particularly infamous for his repressive politics), the dissatisfaction of the citizens knew no bounds and the 1980 Gwanju Student Uprising were transformed into a bloodbath. Notwithstanding political instability, the Ministry of Science and Technology launched the National Programme for Research and Development in 1982 for the purpose of promoting and advancing the country’s technological growth. Moreover, Nam-June Paik presented his project Good Morning, Mr. Orwell in 1984 in collaboration with the New York-based WNET-TV television network, the Centre Pompidou Museum in Paris and other television studios in Germany and South Korea. This historical television performance saw the participation of  Laurie Anderson, Peter Gabriel, Philip Glass, John Cage, poets Allen Ginsberg and Peter Orlovsky, Merce Cunningham and artist Joseph Beuys. The project coordinated by Paik reached an audience of 25 million throughout the world via satellite and its impact on the young Korean artists at the time was enormous. The exhibition at MAXXI is presenting works by the exponents of the so-called Video Generation, artists born in or around the 1960s who were influenced by Paik’s example as well as by America’s film culture and new television programmes. These young talents began to use videos and new technologies as a means to explore and attempt to redefine the boundaries of their own identities. 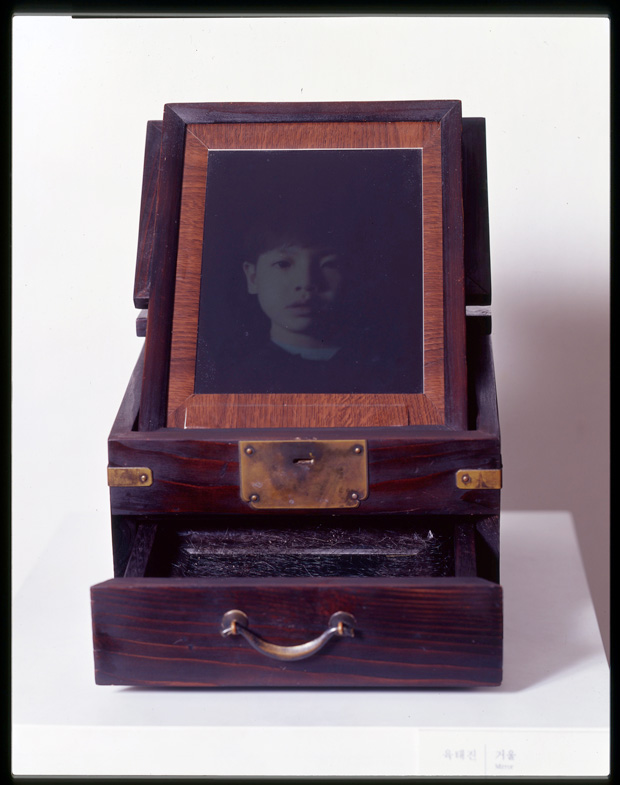 Mirror, the work by Yook Taejin (1961 – 2008), shows two small LCD screens placed in an antique dressing table and displays two of his video-portraits – one as a child and the other as an adult. Self-Portrait by Seung-Young Kim (b. 1963) is a single-channel video in which the artist attempts to hang his self-portrait on a wall, only it constantly slips from his hands and crashes to the ground. 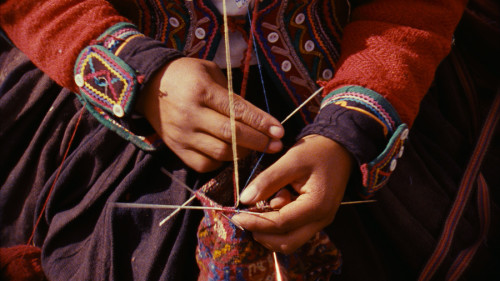 Another work that focuses on the theme of identity is Thread Routes – Chapter 1 (2010) by KimSooja (b.1957). It refers to the ancient art of weaving (linked exclusively to the life of women in traditional societies) and the artist explores the relationship between the sanctity and aesthetics of daily life in a variety of countries including Peru, Chile and Belgium. Sung-Hoon Kong (b. 1965) depicts a recurring nightmare he has been having since childhood with The Fall (1996), an installation created by assembling 12 projectors for twelve slides: a leap into the darkest void and prolonged into infinity. The works presented in this section delineate a tendency to use New-Media as a tool for documentation as well as a means for self-analysis. In a rapidly changing world that leaves no time to understand how individual and social identities are becoming redefined, new technologies seemed to be the best instrument of representation of the modern individual.  (to be continued…)