(…) It continues today Valentina G. Levy’s 2-part essay, review of the exhibition The Future is Now, curated by Yi Soojung, dedicated to new media art in Korea, and currently being hosted at Rome’s MAXXI Museum. The first portion of her article (which you can access here) analyses the first two of the exhibit’s four thematic and chronological sections. An historical-political outline of Korea as well as the work and the role  of Korean artist Nam June Paik, internationally acknowledged as the father of video art, introduce the rising of new media art production in Korea. The article continues from here to venture into the last two section of the exhibition where we encounter to the most recent artistic experiences which were formed by the encounter between art and technology, the result of which is a portrait of industrialized and computerized Korea. 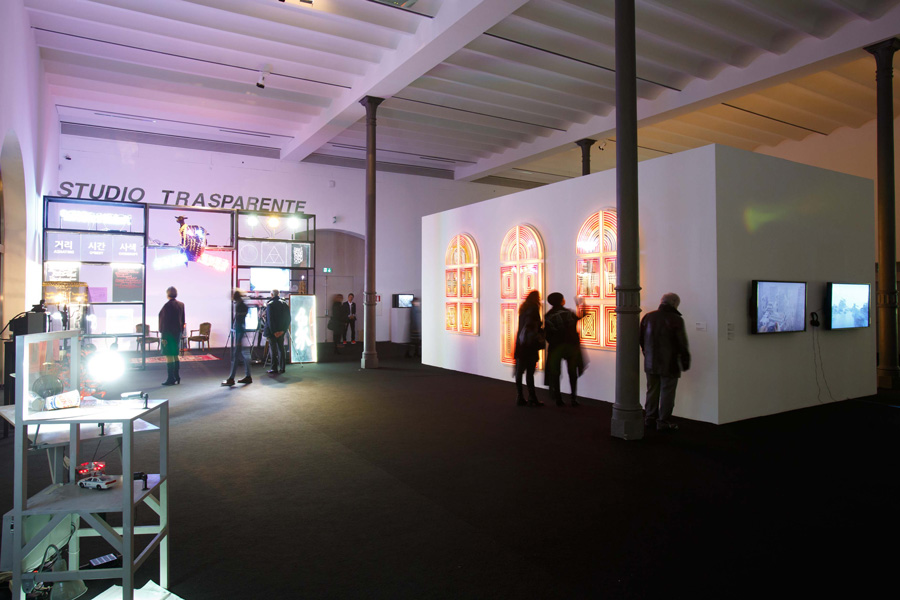 The third section of the exhibition, Internet and the expansion of New-Media Art, focuses upon the digital revolution and the diffusion of concepts like cyberspace and connectivity. Works featured in this section are by artists born in or around the 1970s who were professionally active by the mid-90s, the period in which South Korea began to feel the effects of the economic crisis resulting from the Japanese asset price bubble followed by the financial crisis throughout Southeast Asia. In comparison with the previous generation, the artists presented in this section have a different approach to video-art since it was now seen as an autonomous form of expression. 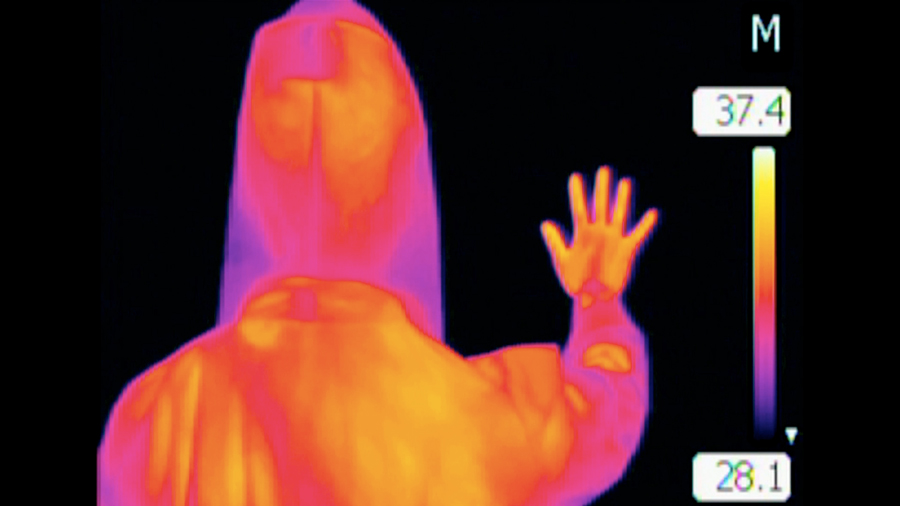 The priority of these artists seems to be the use new technology as a tool for a consideration of political, social and environmental issues linked to the rapid changes involving the country from the 1980s to the beginning of the new millennium.  The Weight of Hands, by Minouk Lim (b. 1968) is a video filmed exclusively with a heat detection camera in which the artist filmed a group of people touring the Ipo Bo artificial lake and some of the nearby residential complexes. The creation of this artificial lake was part of the Four Major Rivers Restoration Project, an ambitious and controversial environmental engineering project promoted by President Myung-Bak Lee with the aim of creating a kind of waterway connecting Seoul to Busan. Although not directly cited by Minouk Lim, the project so bitterly criticized by environmental groups and the Korean Episcopalian Conference (who depict it as a source of inevitable hydro-geological disasters) becomes the setting for his The Weight of Hands. Indeed, Lim’s video is an invitation to undertake this work with more than just our sense of sight. Above all, it is man’s intentional deletion of the natural landscape and environment. 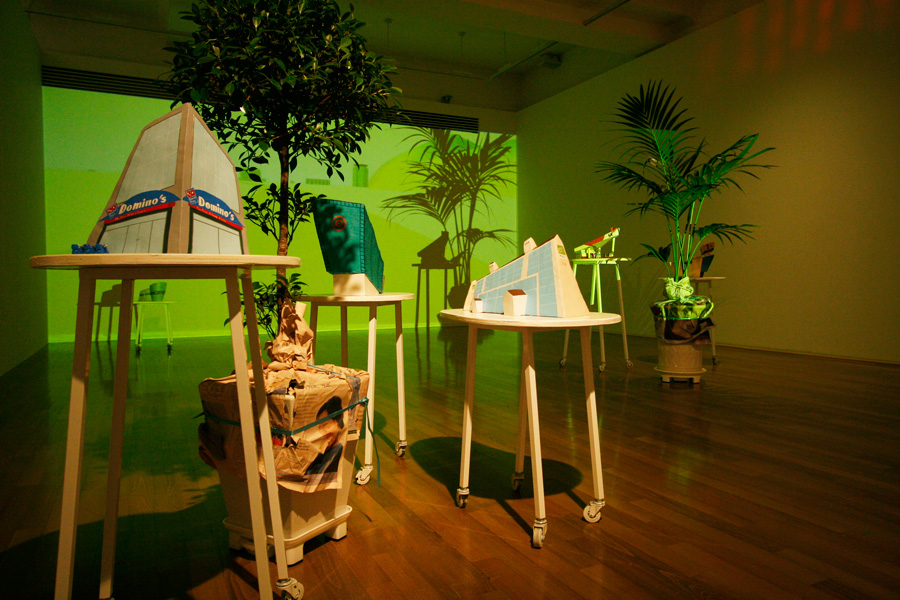 This issue is linked to another work on display in the same section of this exhibit: Euphoric Drive, a computer animation in which artist Biho Ryu (b. 1970) would have spectators travel upon a road in the middle of a golden virtual landscape. All natural elements on the mountains and roadsides used as background have been deleted. Along the way, the spectator encounters only profiles of factories and billboards advertising international brands such as KIA Motors, IBM, SK Telecom etc.

Lastly, the exhibition’s fourth section, Creative talents of culture in the digital era, focuses upon more recent explorations which gained momentum after the first decade of the new millennium. The works presented here lean towards the interactive use of digital technology, the creation of collaborative projects and the fusion of visual art with other disciplines such as architecture and design. New technology is no longer the subject of exploration but a tool for bringing interactive and participatory projects to life which encourage a reconsideration of authorality and the use of artwork through the promotion of group art involving spectators directly and in a multi-sensorial manner as they ponder the present condition and the future of our planet.

El Fin del Mundo is a double-channel video and part of the News from Nowhere project by Kyungwon Moon and Joonho Jeon, the artistic duo who will be representing Korea at the 56th edition of the Venice Biennale. Moon and Jeon’s artistic quest focuses upon the connection between the future, art and society through interdisciplinary projects in which the use of technology is for the purpose of developing interaction among experts in a variety of cultural fields and social sciences, raising important issues linked to the evolution of the world and humanity. More specifically, in El Fin del Mundo, the artists consider the possible death and resurrection of art in a post-apocalyptic world. 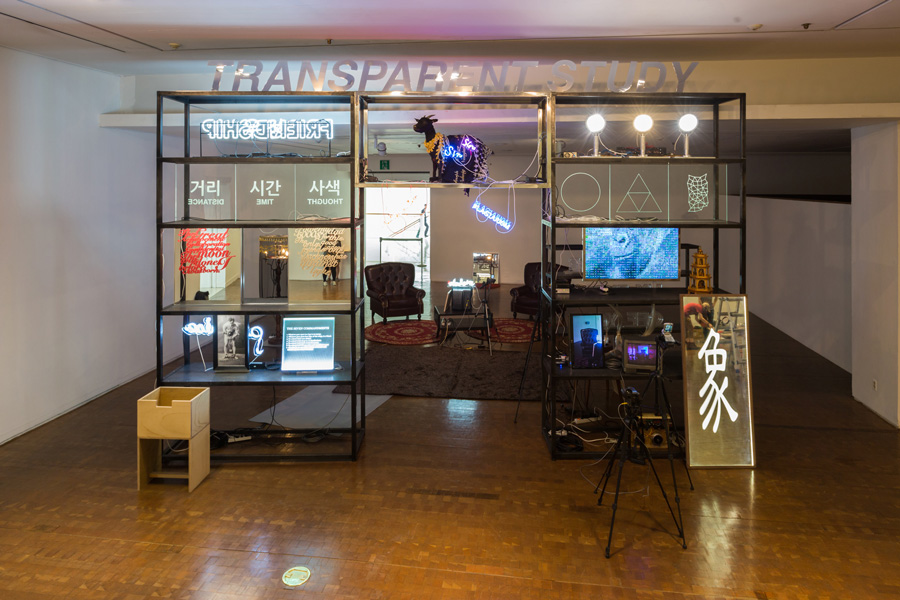 Another interesting work on display in this section is Trasparente Studio 2008-2014 by another artistic duo: Bang & Lee. This environmental installation reproduces an ideal place in which the artists invite the audience to take into consideration the relationship between image and the media that produces and diffuses it in relation to the evolution of history and today’s society. The work seems to have been inspired by Korean sociologist Byung-Chul Han’s essay Transparency Society which introduced this definition of today’s world for the first time – calling into question the virtues of the term “transparency”. The easily accessible global diffusion of images and information over the internet is a huge step forward for humankind but it has also turned out to be a double-edged sword in that there is a growing loss of the individual’s privacy while data can be manipulated and modified with great ease. Bang & Lee’s installation encourages spectators to consider the ambiguity of image in a world made transparent by the internet and yet no safer than it was before. (Please click here to read the first part of the article)

«The Future is Now»