The Legacy of Allan Kaprow – Blog 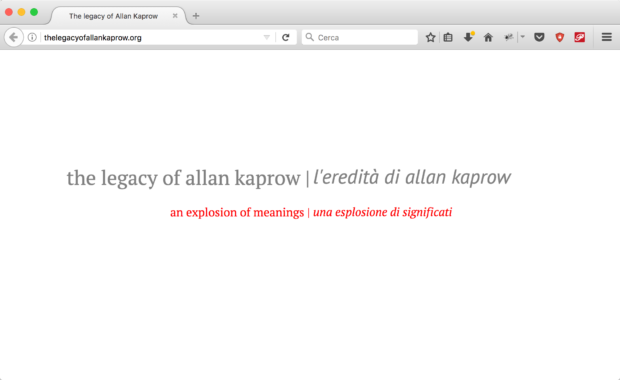 This is the blog page that belongs to The Legacy of Allan Kaprow, an electronic happening for an itinerant project designed in 2016 by Paquale Polidori, currently on view on Arshake’s banner. It was developed as part of the course in Extra-media Techniques at the Academy of Frosinone, a collaboration that engaged students and artists from all over Italy. The project was conceived during a time when a double anniversary was being celebrated: sixty years since the death of Jackson Pollock and ten from the death of Allan Kaprow, a visionary artist, author of the happening concept and pioneer of participatory art.

The project was presented in several venues which means that it went through different phases of its life: at the Academy of Fine Arts of Frosinone (2016), at the historical gallery AOCF58 in Rome (2017), and now on Arshake’s banner where it is enriched with new contributions that you can find on this page from September the 11th as long as they are added to the project. Please visit here the page of the project to know more in depth about the project and to read Pasquale Polidori’s text. 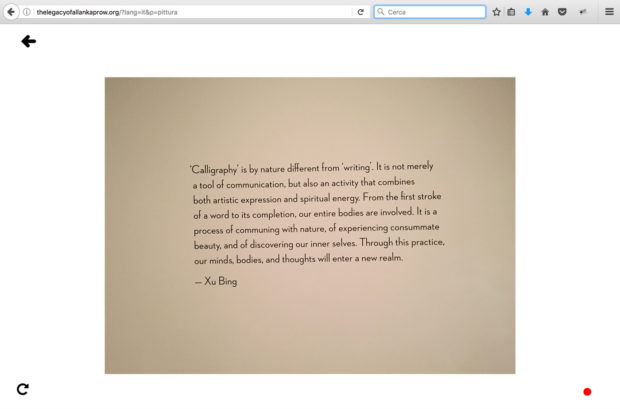 Multimedia artist Chiara Passa, author of Arshake’s banner special project Fourth Dimension Banner, has contributed to The Legacy of Allan Kaprow, by associating the word ‘painting’ with a quote by Xu Bing on calligraphy.

Rita Mandolini has participated to The Legacy of Allan Kaprow with seven new contributions that on the website you will find by navigating within the following words and syntamga: water ( Ostia, 2017); incident (Trappola, 2013); ordinary things (Timer, 2014); painting (Orpello, 2017), materials (Visita, 2015); chairs (Sedia, 2015); street (Elemento a sorpresa, 2015). 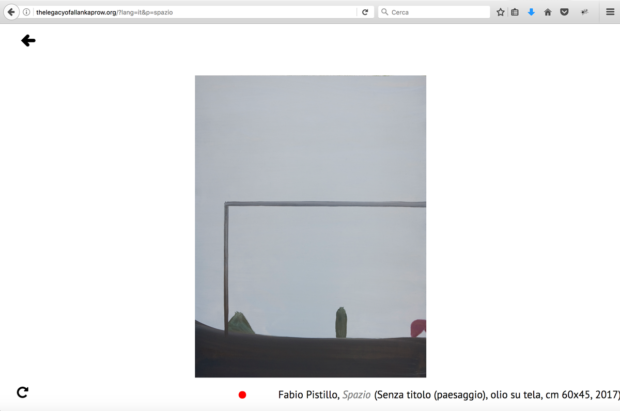 Fabio Pistillo has contributed to The Legacy of Allan Kaprow with his new ‘pictoric horizons’ associated to the word ‘space’ (Senza titolo [paesaggio], 2017) 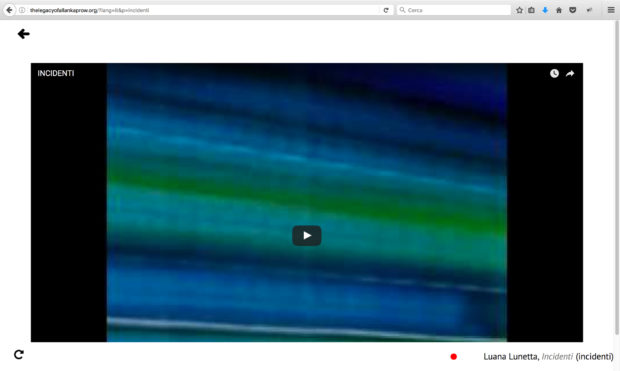 Sound designer Luana Lunetta has contributed to The Legacy of Allan Kaprow, with an acusmatic composition realized with Ambisonics technology (Incidenti, 2017), associated to the word ‘incident’. 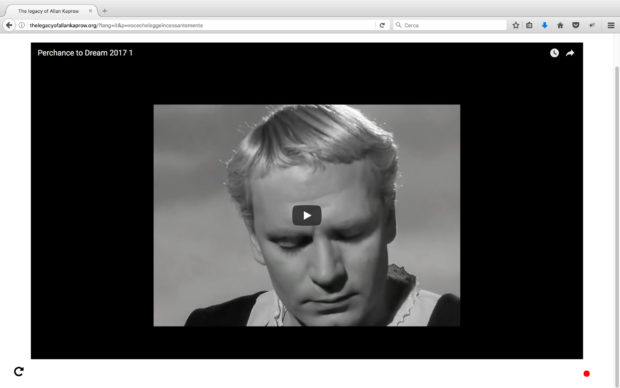 Stefan Nestoroski has contributed to The Legacy of Allan Kaprow with Perchance to dream, a video inspired from Laurence Olivier’s adaptation of Hamlet (1948) by William Shakespeare. 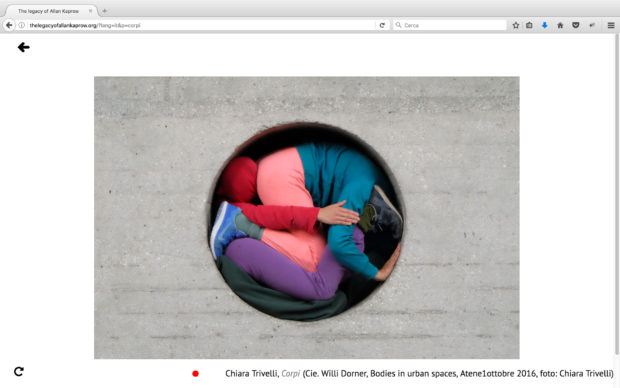 Researcher and curator Chiara Trivelli contributes to The Legacy of Allan Kaprow for the word ‘body’ with photographs shot during Bodies in Urban Space in Milan, one of a series of performances conceived by Willi Dorner, (founder of the Austrian based Dorner’s company) where a group of selected dancers are directed in urban choreographies that involve passers-by in sort of street happening. 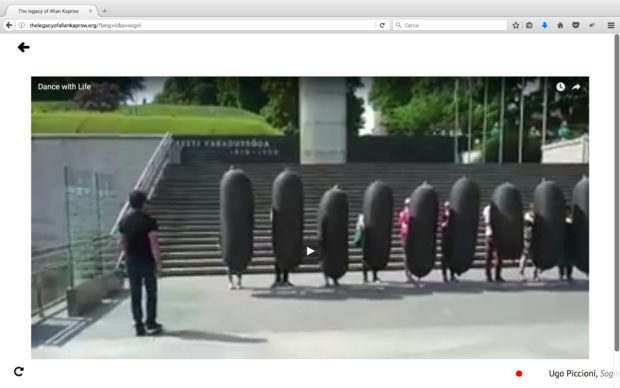 Artist Ugo Piccioni enriches the contents of the word ‘dream’ with the video derived from his performance Dance with Life that took place in Estonia, in Tallin’s place of Liberty within the second edition of the Tallin Art Week, a work presented as a site-specific and in realtion to the history of Estonia. The video triggers universal hints of reflection in relation to human fragility. 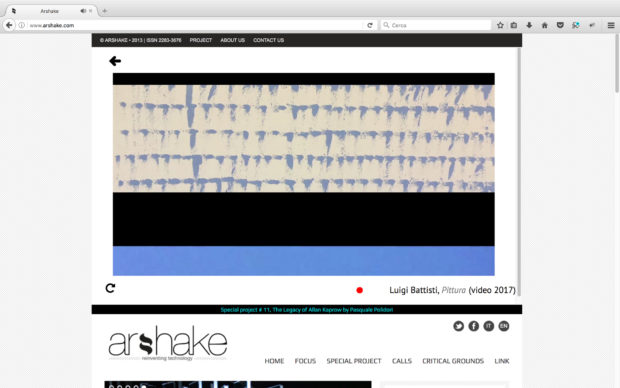 Luigi Battisti has contributed to a The Legacy of Allan Kaprow with a video associated to the word and to the dimension of painting. 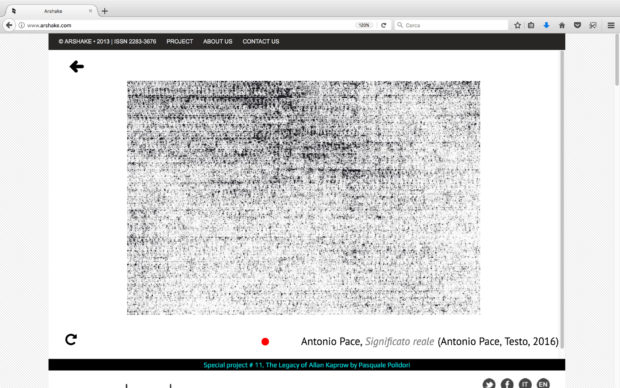 Antonio Pace, author for Arshake’s banner of «Intervalli Tipografici/Typographic Intervals» (2016), has contributed to The Legacy of Allan Kaprow with his work and typographic thought shaped from the bodonian font he created. The projects takes inspiration from the anthropology of writing by Giorgio Raimondo Cadorna, and calles into play the ‘real meaning’ and the magic of writing, isolated from anything it conveys.

The contributions by Massimo Ruiu with the works Ombraassoluta and Il riposo del poeta, respectivley associated with the words ‘corridor’ and ‘chair’, have played with space, light, and the dimensions that the interaction of the whole generates, projecting the shadow shadow that darkens our consciousness. 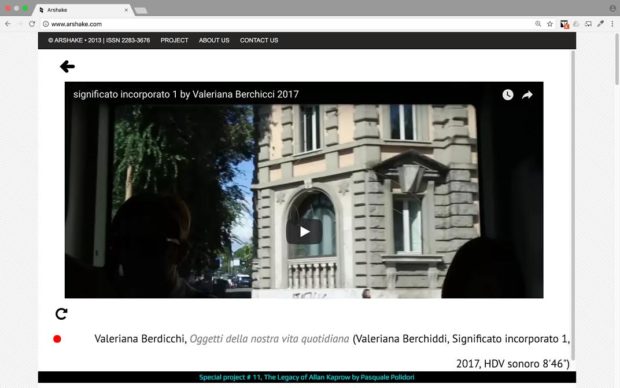 With Embedded Meaning 1, young Italian artist Valeriana Berchiddi guided us in a journey inside our daily life. 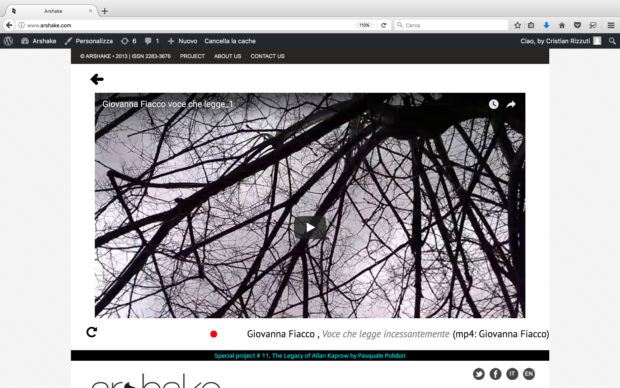 The video- contribution by Giovanna Fiacco, Voce che legge incessantemente (2017), to browse through the very same syntagm, earmarks the voice to the words of the blowing wind. 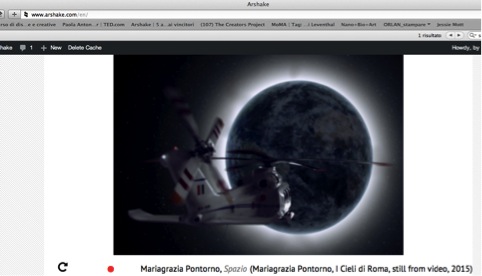 The contribution of Mariagrazia Pontorno for The Legacy of Allan Kaprow for the word ‘space’ is a snap shot, a momento from her 3D video I Cieli di Roma with which she retraced the history of the Pope living the Vatican by elicopter as a moment of compression between tradition and modernity. We followed this project in its shaping with Arshake’s Special Projecy # 4 when the banner became a window to her studio, enablying us to become voyeurs of her creative progression, also through the exchange with other professionals.

Italian poet Luigi Severi has contributed to The Legacy of Allan Kaprow with his poetry with which he enriched syntagms: ‘specific substances’ (tre sostanze specifiche – sonetti, 2017), and ‘garbage cans’ (di pericolazione, 2017), and the adverb ‘may be’ (forse, 2017) 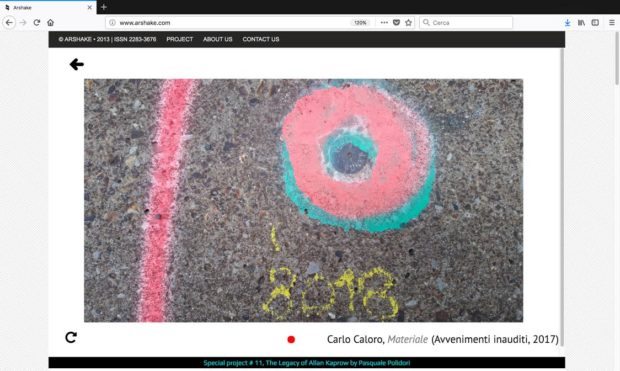 Media artist Carlo Caloro has contributed to The Legacy of Allan Kaprow with his ‘unheard – of –happenings and events’ to look at through the word ‘matter’.

The writer and poet Ginevra Lilli offered Arshake an emotionally profound piece of writing on the occasion of the special project #6, Navigare (Sailing) by the Italian collective Studio ++. She is currently contributing to The Legacy of Allan Kaprow by animating two of her works, each of which is composed of poetry and artwork, converting them into a GIF to be found through the word ‘dreams’. People who contributed to the creation of this work have become part of a choral project: Simon d’Exéa, the work’s photographer; Bufo-Lo Giudice, the photographer of the text, and Cristian Rizzuti, who produced the GIF. In addition, Jehanne Marchesi has made an adventurous journey translating the poetry from Italian to English, as only a professional poetry translator is able to accomplish. 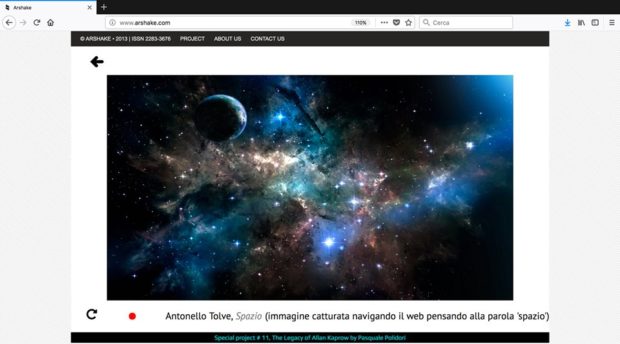 From the written poetry to poetry of space, art critic and curator Antonello Tolve, director of Arshake’s Critical Grounds, contributed to  The Legacy of Allan Kaprow with an image he encoutered on the web when thinking about the word ‘space’. 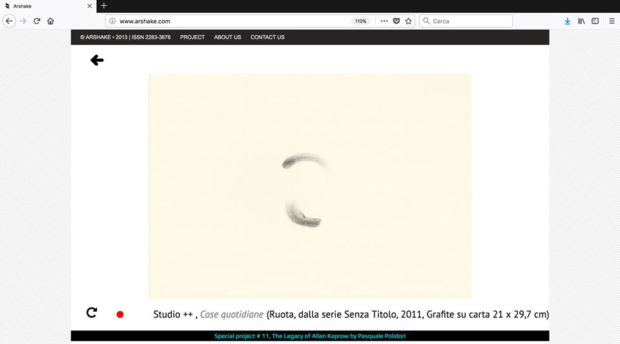 The collective Studio ++ has contributed to The Legacy of Allan Kaprow with the digitalization of Ruota [Wheel], from the series Untitled (graphite on paper, 21 x 29,7, 2011), associated to the words ‘space’ and ‘ordinary objects’. The graphite on paper materializes a gesture connected to movements in the digital world. «It is a new perspective that belongs to all and intervenes to broaden the common conception of space through the usage of ordinary objects in our day-to-day life». 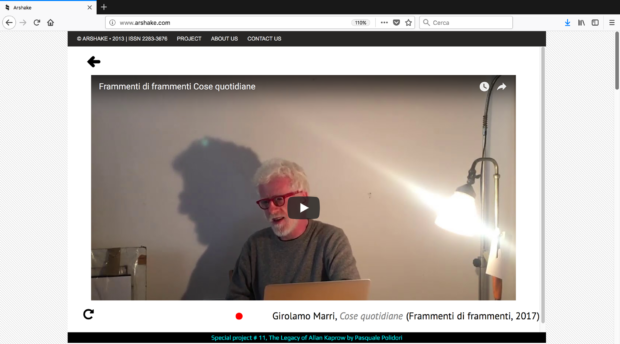 Girolamo Marri literarly emtered The Legacy of Allan Kaprow with his performative presence expressed through almost every word and syntamg present in the text, an occasion to browse again here and there on the website to retrace the paths of an alway enriching hypertestual work and archive of works, interventions, ideas until we stumble across his performances, evocation and evolution of Jelly Ghost, the special project that Marri realized for Arshake’s banner in 2014, and recognizable sign of his creative attitude. 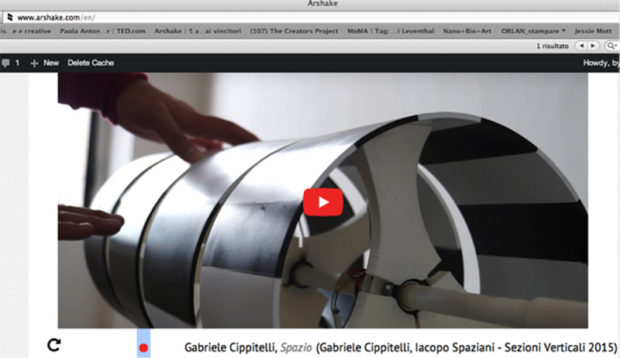 Gabriele Cippitelli contributes to The Legacy of Allan Kaprow with a artistic video realized with Iacopo Spaziani, documenting the design and the implementation of an interactive installation that investigates the behavior of graphic generative objects with the interation of the users. Gabriele Cippitelli has been collaborating with Pasquale Polidori and The Legacy of Allan Kaprow since its inception and has followed it in all its evolutions, included this one, working in close collaboration with Cristian Rizzuti who is author of Arshake’s website and logo.With this work, Arshake concludes this passage of The Legacy of Allan Kaprow that has been accompanying us for various months with its vitality. The blog remains as a form of documentation to track back the contributions that were added during this time of its life on the banner. The Legacy of Allan Kaprow’s official website remains. You can can continue navigate the electronic happening, waiting for the new evolutions, implementations, and re-incarnation of the work. In particular, Arshake thanks Pasquale Polidori, author and Director of the entire project, Gabriele Cippitelli and Cristian Rizzuti who have been working greatly during these months, and all the contributing artists: Luigi Battisti, Valeriana Berchiddi, Carlo Caloro, Gabriele Cippitelli, Giovanna Fiacco, Ginevra Lilli, Luana Lunetta, Rita Mandolini, Girolamo Marri, Stefan Nestoroski, Antonio Pace, Fabio Pistillo, Chiara Passa, Ugo Piccioni, Mariagrazia Pontorno, Cristian Rizzuti, Massimo Ruiu, Luigi Severi, Studio ++, Antonello Tolve, Chiara Trivelli, Alberto Zanazzo.