The “non finito” between Michelangelo and Quayola

The “non finito” (unfinished) sculpture, as an existential metaphor for two different zeitgeists, shows us the transformation of our deepest fears and disturbances over time. While in the Renaissance this was mediated by Catholicism, in our time the fluid nature of digital technology inevitably plays the most important part.

Prisoners and Pietà Rondanini are the greatest examples of Michelangelo’s non finito works. Representing a real fracture with classicism – the restless and perpetually unsatisfied genius had been contemplating this throughout his life – it only matured in his final acts. Michelangelo, as we know, maintained that the work of art was already present in the block of marble and his task was teleological – revealing it through the immortal tools of sculpture, the mallet and chisel. 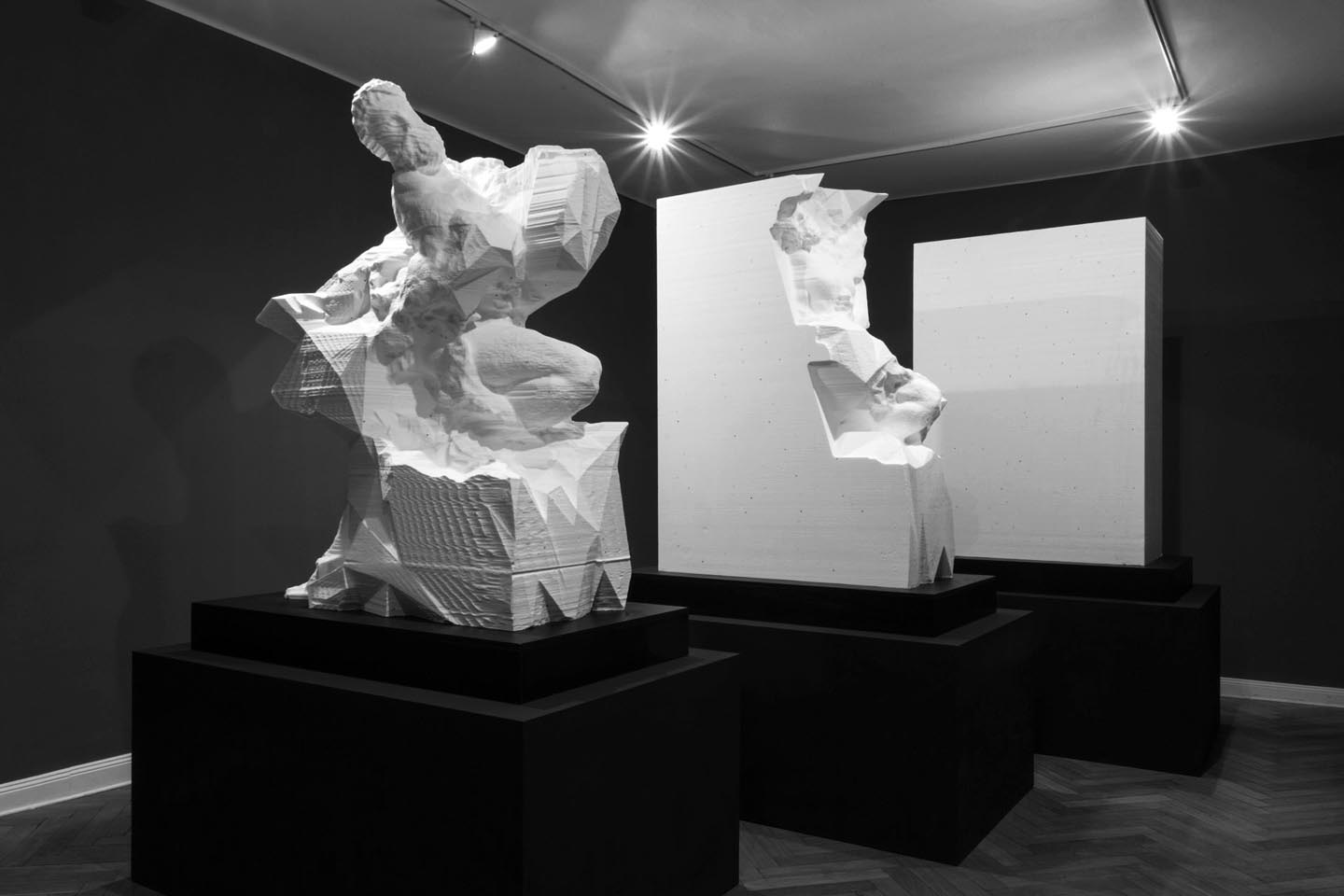 Davide Quayola was born more than half a century later and the tools he prefers to use are digital, composed of algorithms and artificial intelligence. Among his fascinating works we find the Michelangelo topos of the non finito. This non finito work is very different from that of Prisoners. Although reminiscent of a system of thought that was highly characteristic of the Renaissance crisis and, from then on, always present in the history of art, this work distorts meaning, showing something very different underneath. 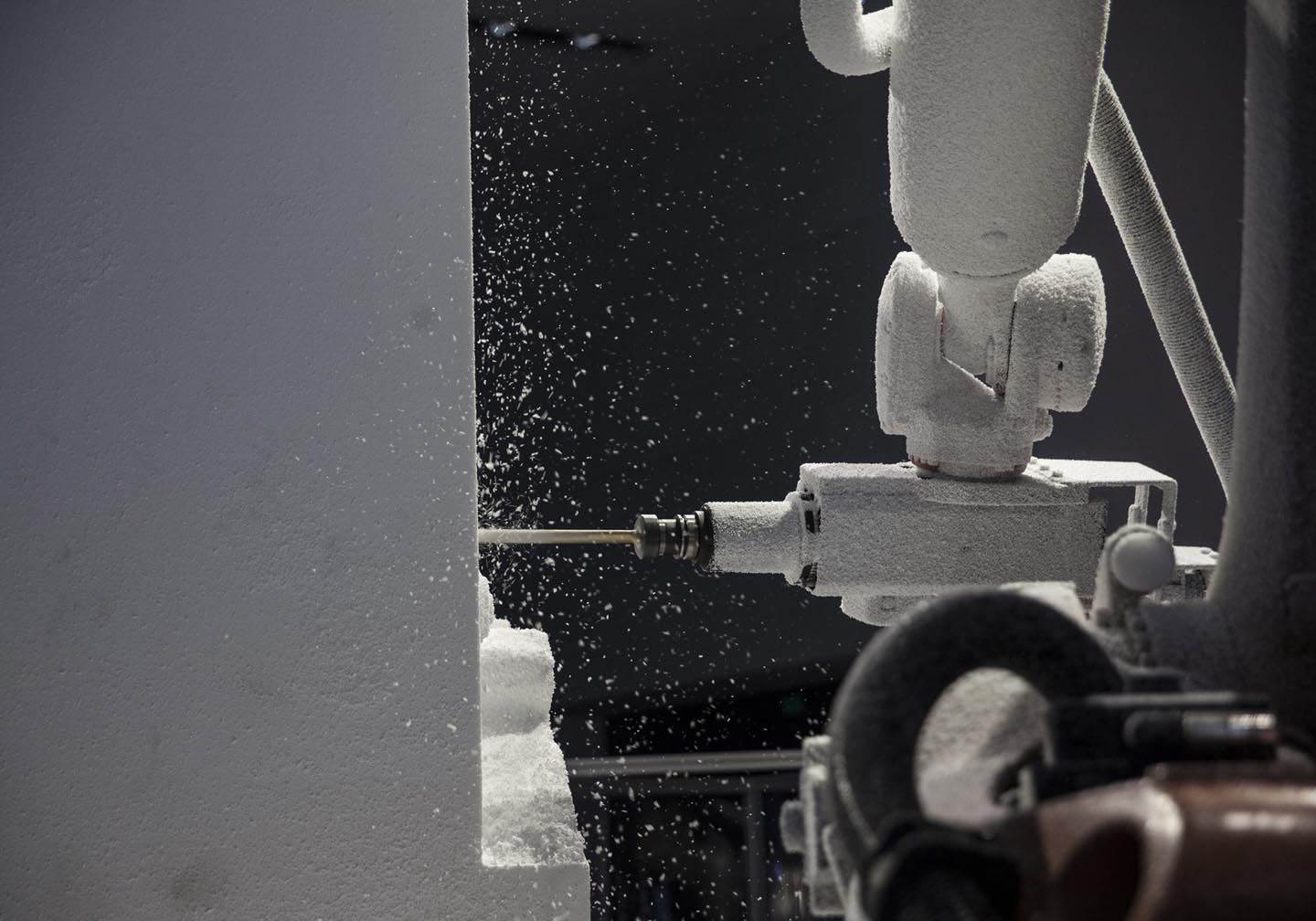 Quayola’s non finito works, developed in several projects over the past decade, are created by a mechanical arm connected to an AI consisting of algorithms, which the artist programs and puts to work on three-dimensional scans of classical sculptures. By showing the results, and often even the creation process of these pieces through the work of the mechanical arm, enormous differences and interesting points of contact with Michelangelo’s sculptures can be noted in the ontological essence of the artefact itself. 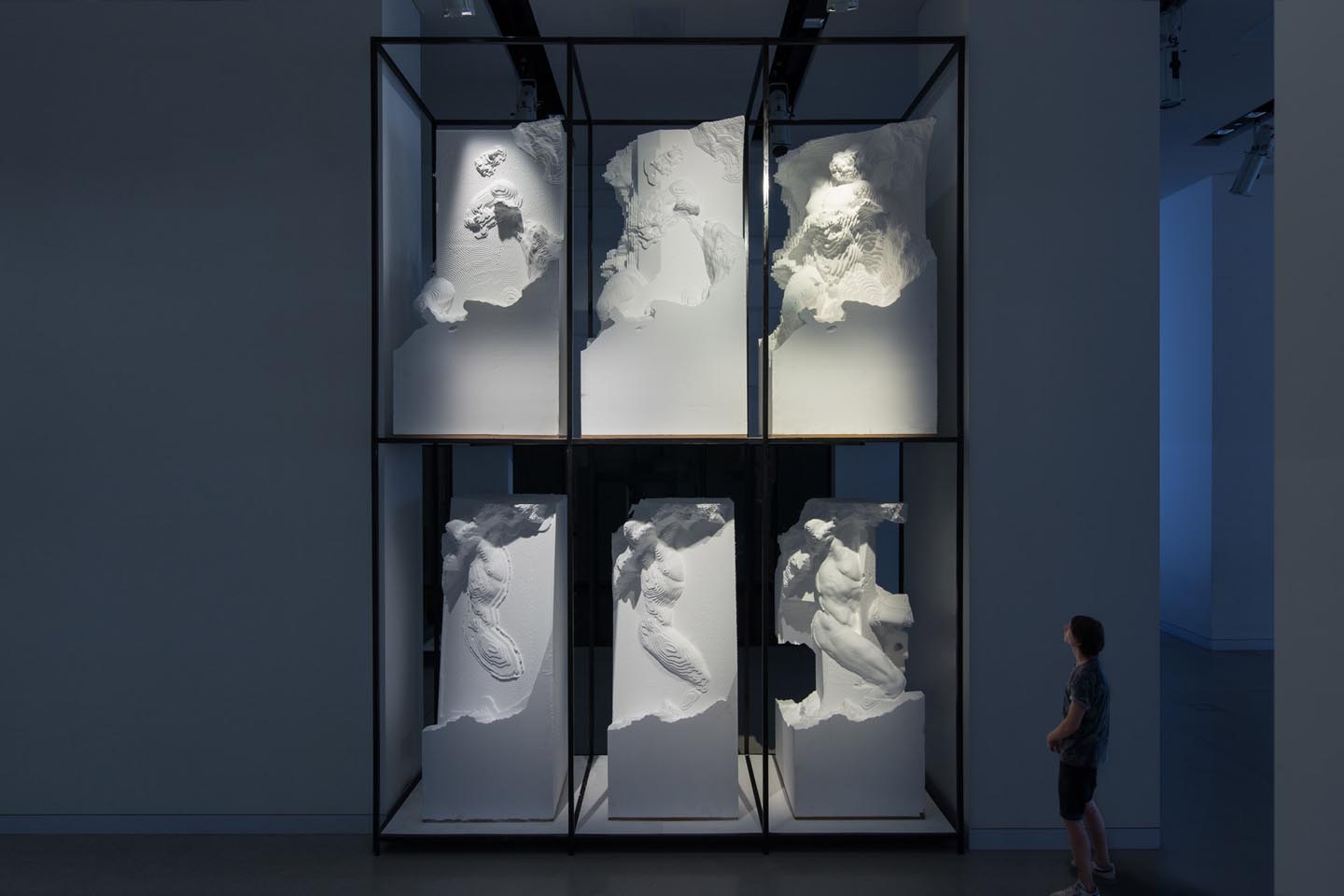 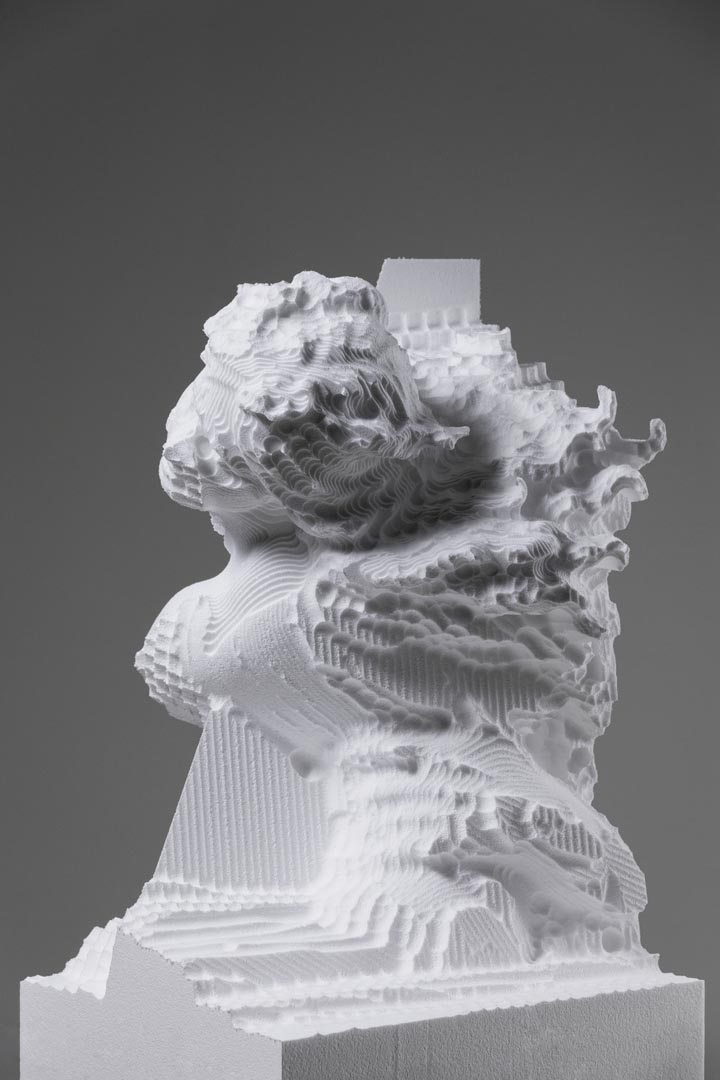 The feeling of stone is filtered by a God who, from pure light, has become pure electricity. If we compare Prisoners with Quayola’s Unfinished Sculptures, we note the natural and inevitable decay of a cultic aura in the latter works. However, this has been replaced by an essential aggressiveness, a contemporary zeitgeist, which puts the analogue and digital worlds into contact with each other through the pixellation of the sculpture, a three-dimensional spatial glitch. The other-than-self, distinct and concrete, to which Prisoners is linked, that extreme and cathartic faith that moved the rasp in Michelangelo’s hands, collapses into the rhizomatic and metamorphic contemporary reality, which in the space-time fluidity immerses the analogue and digital into an integrated Whole.

At the same time, however, we also notice an incredible similarity between these works of art, so distant in time and yet so close. In a way, Quayola’s perception is the same as Michelangelo’s. Michelangelo, as Delacroix argued, has a pictorial conception of sculpture. He does not work on internal mass but marks an outline which he fills by removing stone; he works within an oxymoron and part of his genius lies precisely in this atypical process. Only by focusing on the space around the image in this way, in open antithesis to the tuttotondo technique (full-relief), does he succeed in trapping the movement of Prisoners in stone, giving the material not only a formal but also a conceptual quality. Interestingly, in an interview about his Unfinished sculptures, Quayola himself said: “I focused on the space around these sculptures, not on the figures themselves.” Quayola’s pictorial sense can be found in all his works. It clearly manifests itself in many of his static or moving two-dimensional works, which are strictly digital, but it is also present in his non finito pieces which, through his particular sensitivity, manage to forge a connection with the Renaissance genius. The image of classical sculpture at the basis of Unfinished Sculptures is nothing more than a simulacrum emptied of character but not of pathos. So, in its computerised, algorithmic, artificial and post-human translation, where the artist acts as director of the whole process, the movement trapped in the stone acquires an existential nuance in a pattern that tends towards abstraction, losing its specific morphological character. 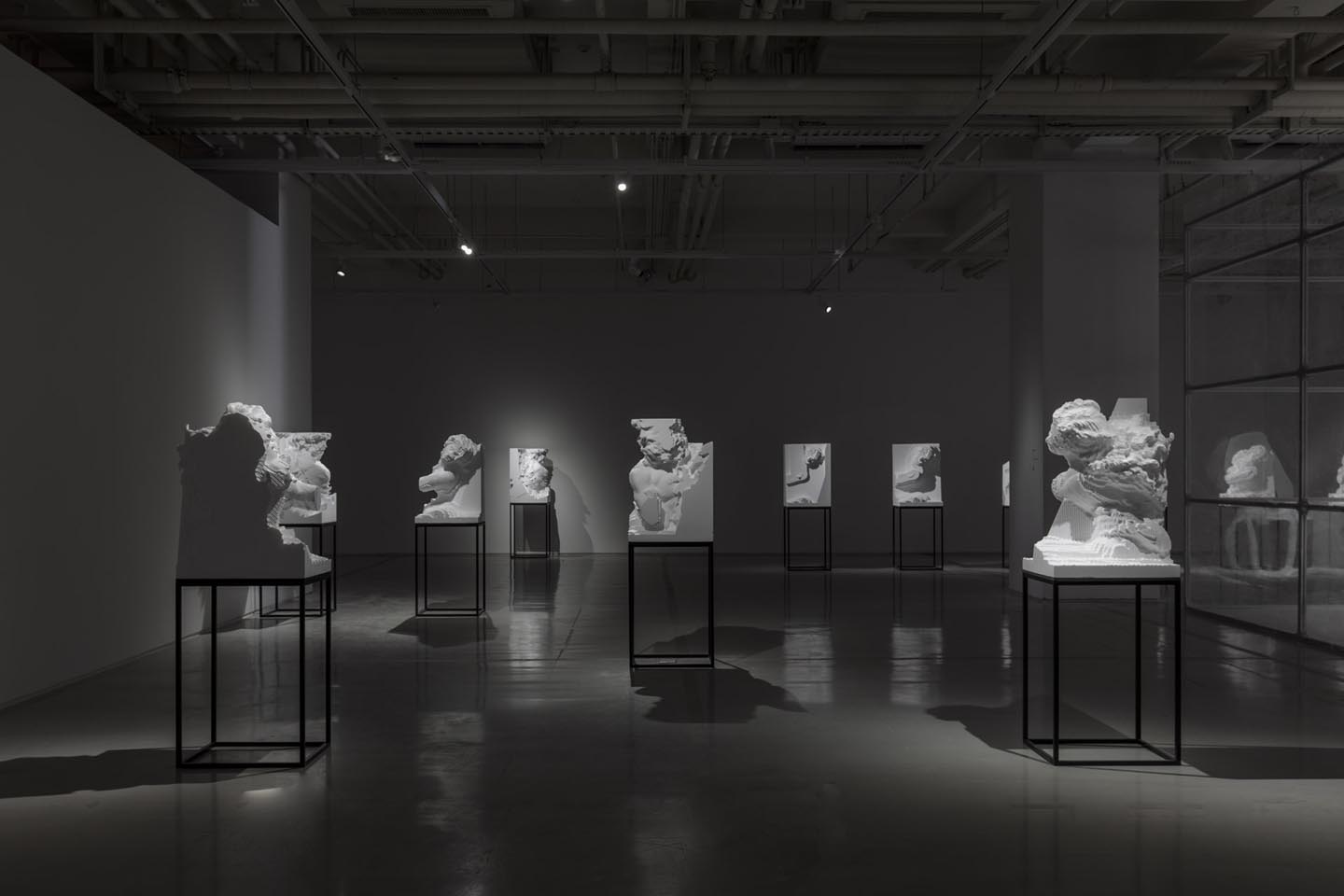 The representation of the statue changes with the medium – “the medium is the message” – so the prisoners or, in the Rondanini Pietà, Christ and the Madonna, are transformed into classical statues, which have been translated and then translated over and over. The essence of digital fluidity trapped in stone. The frustration of Prisoners, so elevated and all-encompassing, becomes astonishingly fragmented and stripped down, representing our frustration. 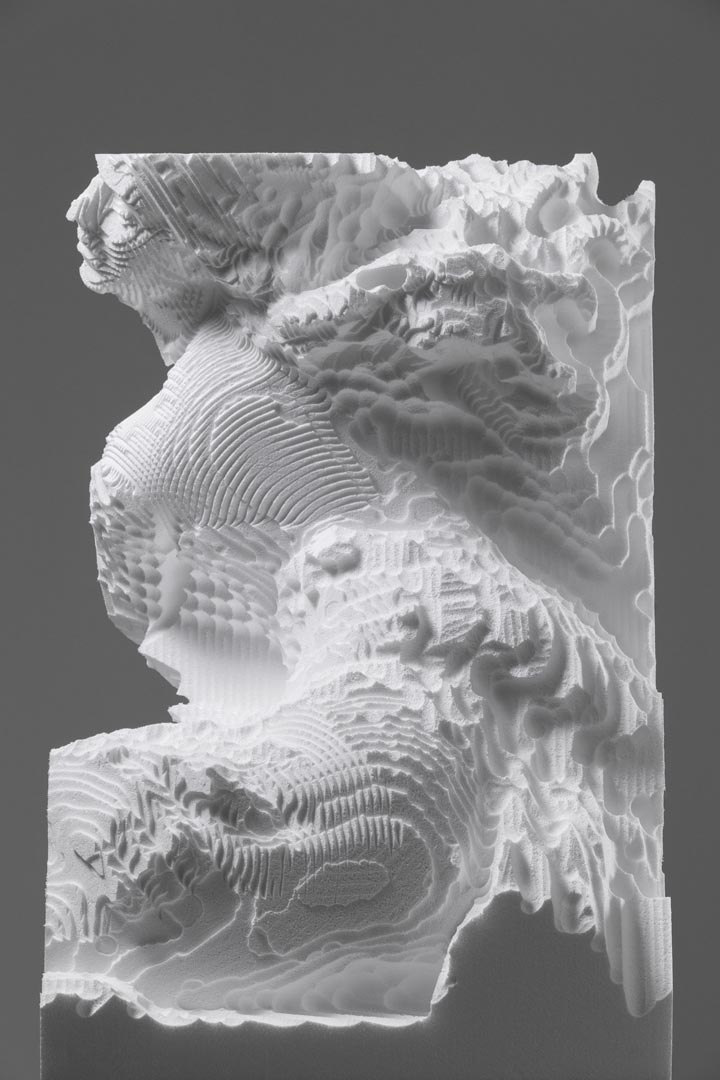 This reflection on sculptures that are so chronologically distant from each other, and yet conceptually related, is in no way intended to connect the two artists, except for the way in which they both masterfully manage to analyse the spirit of their times, producing the fascinating sparks that are their works of art. What is particularly interesting, however, is how the overwhelming changes over time, how the static rough stone that in the 16th century trapped the souls sculpted by Michelangelo, in the 21st century is moulded, in Quayola’s works, baroquely and mechanically, into a paralysing illusion. One is left feeling astonished and fascinated, teetering between being and appearing, a monumental emblem of a crisis – literally, therefore, one of evaluation, reflection and discernment – not religious like Michelangelo’s masterpieces, but so random and linked to the different planes of existence as to sink into the mysticism of contemporary reality.