The non-places of Franco Belsole

A security camera monitors a portion of the space beyond a visual field: a metonymic image of a position chosen by the photographer for this occasion. In fact, Paris is a series from the project dedicated to contemporary cities (including Berlin, Helsinki, New York and Philadelphia) which Franco Belsole has been working on since 2010. Spaces of modernity, where things flow. There are reflections on glass and steel and zenith light where the presence of humans is for the most part depicted by passersby and strangers. They view others with indifference and are absorbed in their thoughts, worries and occupations. Actually, location is of relative importance to Belsole. Nothing here evokes the typical Parisian atmosphere and it is no coincidence that the location is its modern Défense district.

Belsole uses his telephoto lens to obtain a vivid view from a distance, making figures appear so close that even wrinkled clothes (at the end of a day), gestures and objects are easily observed. And yet, this deliberate proximity does not say much about them. Through the camera lens men and women appear suspended; isolated in an interior world that we can’t know anything about. Except for a presumed relationship with the environment in which they were photographed. 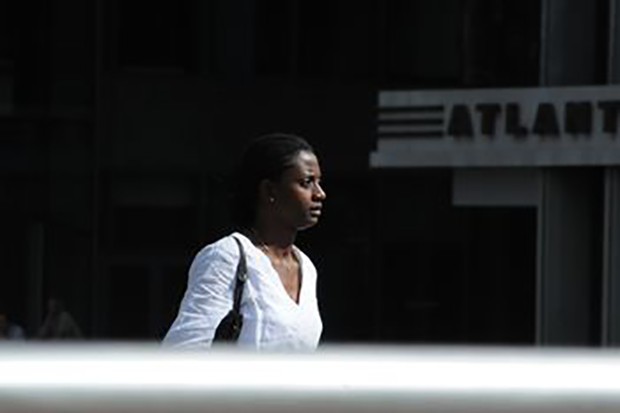 In fact, with an observation point at eye-level, Belsole’s favourite composition presents an element of urban décor on the figure that is practically flattened (an effect of the perspective). The artist clarified that it is a careful and precise choice. A means to express a kind the oppression which society inflicts upon the individual who is pigeonholed (on a par with some of the figures Uliano Lucas surprised walking across Milan’s Piazza Dante in 2008).

In The non-places of Franco Belsole exhibition, these shots are associated – in the same amount of diptychs – with close-ups of details of buildings: the visual field is saturated at times with the typical modern grid while glass captures incongruous and momentary reflections, making the interior basically impenetrable. Belsole photographs (in this case as well) the shell of living areas, a surface that becomes the trope of sliding in public space. Buildings and individuals do not “converse” on the same level, however: the former tower over the latter, defining the context’s itineraries, atmospheres and lighting.

His work can be placed in the category of impassive photography – found in the works of Bernd and Hilla Becher and defined in Italy with the photographic campaigns of Gabriele Basilico during the 1970s – characterized by a «parched» black and white although Franco Belsole presents tangencies with the photographs that Armin Linke dedicated to developed landscapes: at times, this German photographer lingers on abstract geometry that stands out in full colour on the horizon, preferring viewpoints which are most definitely abbreviated in order to emphasize the subjectivity of the view. On the other hand, Belsole is more like a camouflaged observer who drifts among the crowd and examines without being noticed: the typical ghost in a controlled society. A society that we all belong to and, at times, conspire with.

This essay was written for the occasion of the I non luoghi di Franco Belsole exhibit curated by the same author, AOCF58 Galleria Bruno Lisi – Rome,  12 – 30 January 2015.