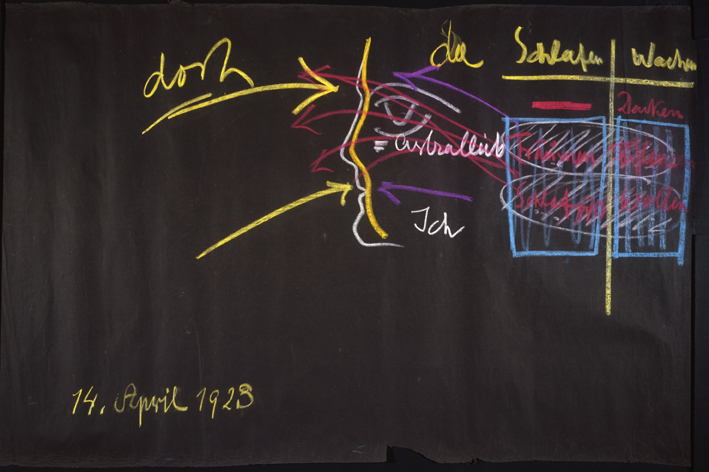 From the Padiglione Centrale at the Giardini to the Arsenale, the journey designed by Massimiliano Gioni for his 55. International Art Exhibition sets at the centre of the question a thoughtful horizon on the human knowledge that starts from its original identity. From an imaginative whole which removes art from the pedestal of the market to keep it in a necessary and dynamic dialogue with all the various forms of creativity.

The model of Il Palazzo Enciclopedico by Marino Auriti («a hundred and thirty six storey building» which is the «dream about» design and cherish «a universal and absolute knowledge» of «the history of art and humanity», opens at the Arsenale, a bright journey under  the guiding star of the enkyklios paideia – an urgent project that drives many other artists, writers, scientists, and prophets […] to fashion an image of the world that will capture infinite variety and richness -, offers pictures, world experiences, obsessive and creative catalogs (the works of the Romanian Ştefan Bertalan are magnificent model), a memory store that aims to list, filing, classify the world of life and the various meanings that concern. A world that «is for everybody the horizon which it weaves the plot of the opera within» (Trimarco).

The Palazzo Enciclopedico proposed by Gioni, then, is a story that on one hand focuses on a comprehensive study of human creativity in order to present a critical spectrum through which it can suck a better knowledge of man and the world; on the other hand it highlights the importance of broadening the horizons  of thought to a design that ranges from many shades of imagination. Of a iconography of a galaxy in which the work is presented as a mirror of the world, as a re-appropriation of reality and hallucination, as the image of an anthropological and sociological research that look towards one of the many possible truths.

Carl Gustav Jung and Rudolf Steiner are the two voices that open the path to the «Padiglione Centrale» (extraordinary, upstairs, the work Plötzlich diese Übersicht by Peter Fischli and David Weiss). On the one hand Das Rote Buch (the red book by Jung, also called Liber Novus), a painted volume that occurs as an interiority’s process of identification, as a primitive and intimate introspection linked to projective developments, as an attempt to catalog the imagination and the dream (as the author writes on page 246 «When you embrace your Self, the world will appear to you cold and empty»). On the other hand a series of educational projects signed by Rudolf Steiner, father of antroposophy («the knowledge of the mysteries that are beyond the world of things») and a method (Waldorf) that leads children and adults to a circular learning, without barriers or mental blocks.

As Dorfles describe «the astute and brave» Director of the fifty-fifth Venice Biennale calls on an unforgettable journey – to imagine the imagination – which not only puts extraordinarily professional and amateur artists in conversation, but also builds a sort of Warburg’s atlas that presents the culture in all its complexity. In all its wonder, in all its amazing vitality.