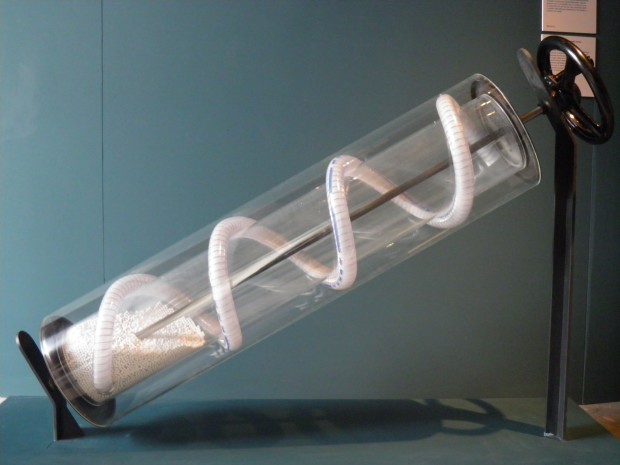 To visit the exhibition “Archimedes: art and science of invention that unfolds through large frescoed rooms at the Capitoline Museums in Rome was for me not only the pleasure of returning to one of the oldest hearts of the history of museums in Italy, but also the stimulus to think over the glorious italic past, made up of illustrious men capable of feats and wonderful intellectual achievements.

Distributed in seven sections, the exhibition features printed books, sculptures, paintings, reconstructions of water clocks and other Archimedean devices. But above all, there are archaeological finds, building materials and calculation tools, theater masks, terra-cotta crockery, fetishes and frescoes, all accompanied by panels of room, videos and animations, which effectively put in relation the material shown with the studies carried out, supporting the user in its understanding and reading. A very important and a duty contribution in an exhibition of scientific slant, for the ability to contextualize the historical character, and for its attention to enhance Rome, in its period of greatest economic splendor and military power.

But I would proceed now in some spontaneous observation following my visit. The first is how the lack of resources of the past, if we want to classify the limitations of ancient materials – from wood to strings of hair, from terracotta to the raw paper, stone – were not a limit for the greatest inventions. If nowadays it seems increasingly difficult to calculate without a calculator or to write projects without the right software, extraordinary minds, such Archimedes were able to merge physical and mathematical theory, abacus and abstraction, practical sense and ornamental beauty, with very little means.

Second observation. Beyond the political and economic rivalry between ancient Rome and Carthage, background to the work of Archimedes, the ancient world offers itself to the visitor as a merging of cultures, of languages​​, a mine of trade and cultural exchanges, today we would say a meltin’ pot, in which theories and technologies found their major use, to solve practical problems related to the agriculture or the war.

The close dialogue between the ancient Romans, Egyptians, Carthaginians and Greeks, prescinded from any cultural conflict; and today we would not have their incomparable legacy if there really were any copyright or intellectual rivalry. The world of the past was fertile ground for a forgotten value: sharing. And with sharing, overcoming the difference – which is itself the value – took place text translations, appropriation of technologies and languages​​, theories, and so new solutions over the course of the centuries. How much fruit would we have collected without a knowledge and an ‘open source’ Archimedes?

My third and final point concerns the etiology and the purpose of the technology as it is applied in modern times. It is extraordinary how many and what tools we have available today to escape an inexplicable boredom. But, I wonder, which need do they answer to?

The so-called ‘endless hydraulics screw’ by Archimedes was invented for the drainage of farmland, finding the centuries countless additional applications and burning mirrors have contributed to the defense of a city under siege. Before they did not exist. The emerging of a problem is the initial engine for reasoning. And the absence of problems is harmful. Beyond the ability to critique the real, without the need, which technology will we produce?

Personally, I am for real technological advance. The eco-friendly advance, that offers a real solution to a real need, which doesn’t enslave the average citizen with the budgets, whose income also supplies the sensational advertisements, which doesn’t create employees wedded to planned obsolescence of the devices, which doesn’t raise to a value a technological overwhelming vanitas, that does not manipulate the economic laws offering in exchange placebo pills against boredom.

“Archimedes: art and science of invention” is an exhibition that, without clamor, makes think. It involves the visitor in a sensory and cognitive experience, identifying him with the story through the imagination, encouraging thought without bore, which doesn’t make spectacular the myth nor shows off the academic knowledge, but which gently doses art and science. In this balance piqued the tickled curiosity becomes the engine of knowledge.