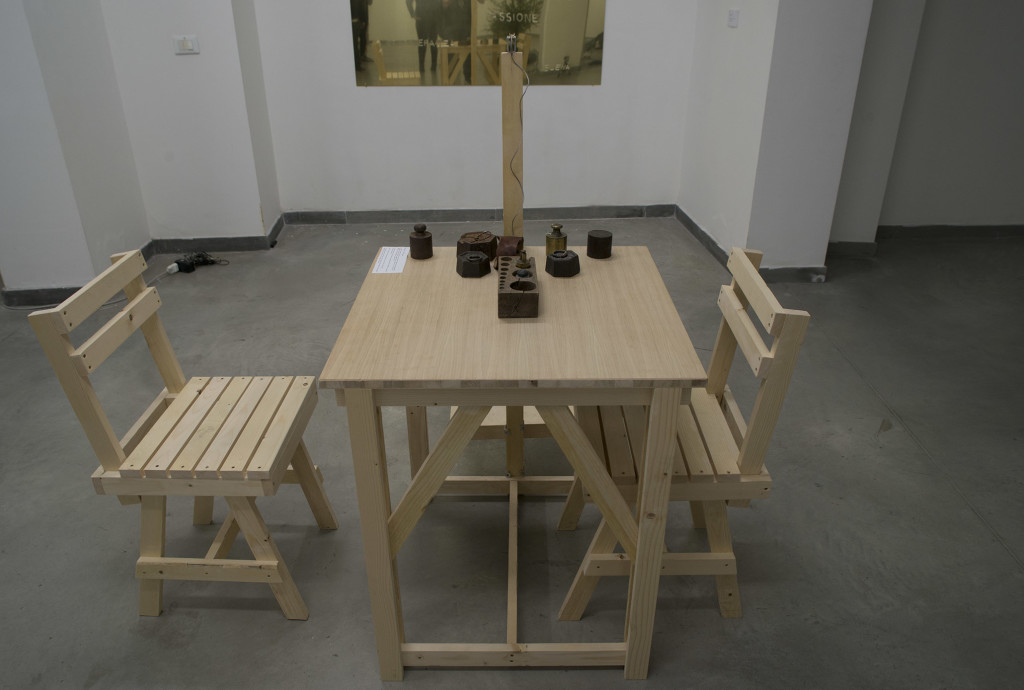 «In the early 1960s, with the pollution of the air, and above all in the countryside with the pollution of the water (the blue streams and the transparent sunbeams), the fireflies began to disappear. This phenomenon was lightning quick and striking. After a few years they were not there anymore (Now they are just a (rather excruciating) memory of the past: and an old man who has such a memory cannot identify himself as a young man in the youths of today and therefore cannot have the lovely regrets of time gone by)»[2]. By using this apocalyptic consideration by Pier Paolo Pasolini (the original critique of the society of neo-hedonist development and a metaphor of a highly perceived and alarming void of power in Italy) as her point of departure, Elena Bellantoni opens a new page of her creative diary to bring life to a comprehensive analysis of the past forty years in history that have transformed Giacomo Leopardi’s formossisima woman into a territory oppressed by political apathy, into a state of neglect and a political environment deprived of any content. Almost as if she were recovering the fireflies (hopes) lost in a maelström of indifference, Bellantoni traces a path that aligns spectators with a dialectic process where the present and past are in constant touch – where the preservation of collective memory fuses with its individual itinerary and where the metaphysical fluctuation of things (much like Kierkegaard’s turning night into day) evokes those small intermittent lights of the night. 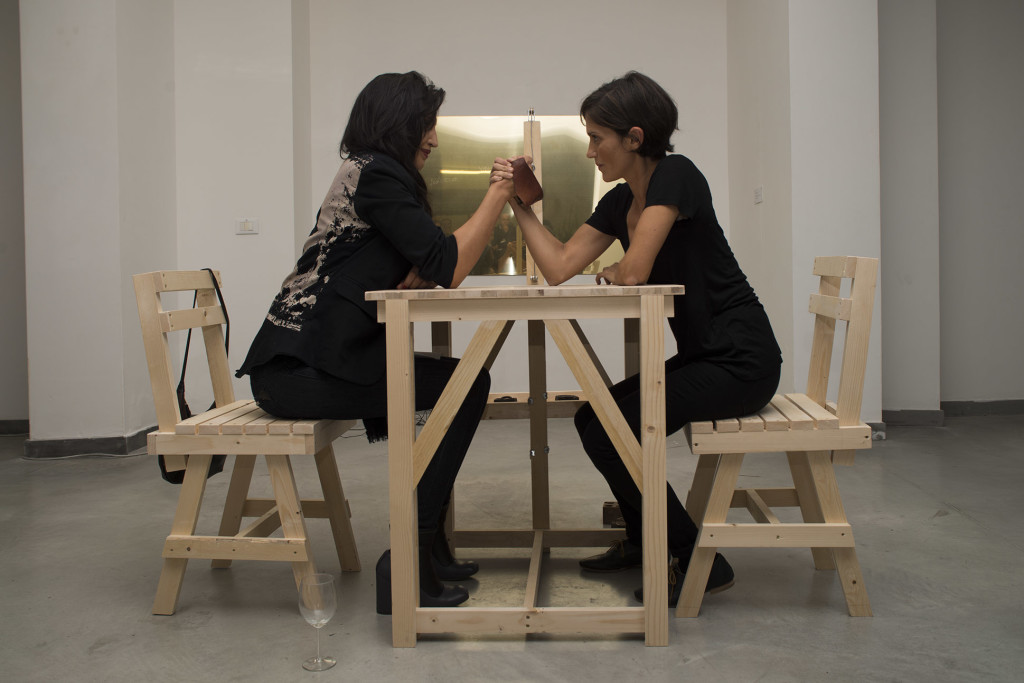 The result of a rereading of Pasolini’s Scritti Corsari published on 1 February 1975 («I was born in 1975»)[3], Lucciole (Fireflies) is the first work that opens this exhibit programme. It is a device which overlaps the artist’s personal story with Italy’s political history for the purpose of inviting spectators to reflect and remember. The artist tells us that «…convinced that the path of each one of us is conditioned by facts of a historical and political nature that look upon us from the outside, I decided to record 40 audio excerpts regarding facts and events from 1975 to present day onto 4 vinyl records». 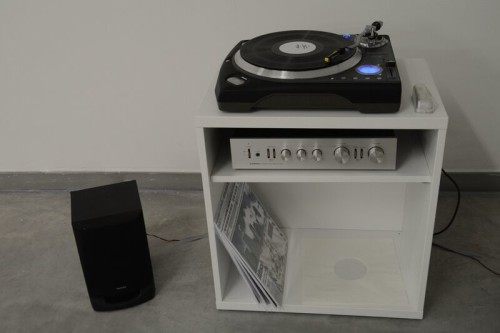 A selection of events taken from old television news broadcasts – a selection that follows the «fil rouge of my memory» – the four vinyl records offer an epoch-making and exhaustive view that is interwoven with glimpses of the artist’s intimate and passionate moods (the record jackets are silkscreen prints that offer a visual account of the artist’s story) to give rise to a poetic and nostalgic narration where the fireflies have disappeared and what we are left with is «the history passing over us and the history which has already passed over us»[4]. 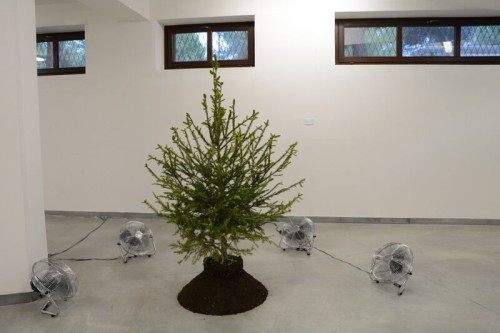 With her Al-pino resistente (Resistant Al-pine), the circular installation developed with eight black fans and an evergreen fir tree (Pseudosuga menziensii, also known as the Oregon Pine) used for one of the most popular Christmas traditions, Elena Bellantoni shifts her attention not only onto the strength of a tree that resists habitual usual abuse every December but on the concept of resistance as well in terms of Italy’s partisan, a brilliant manifestation of its recent history whose ideological role swept away pain to recover its essential freedom through an inevitable armed struggle – much like the strength of this tree. 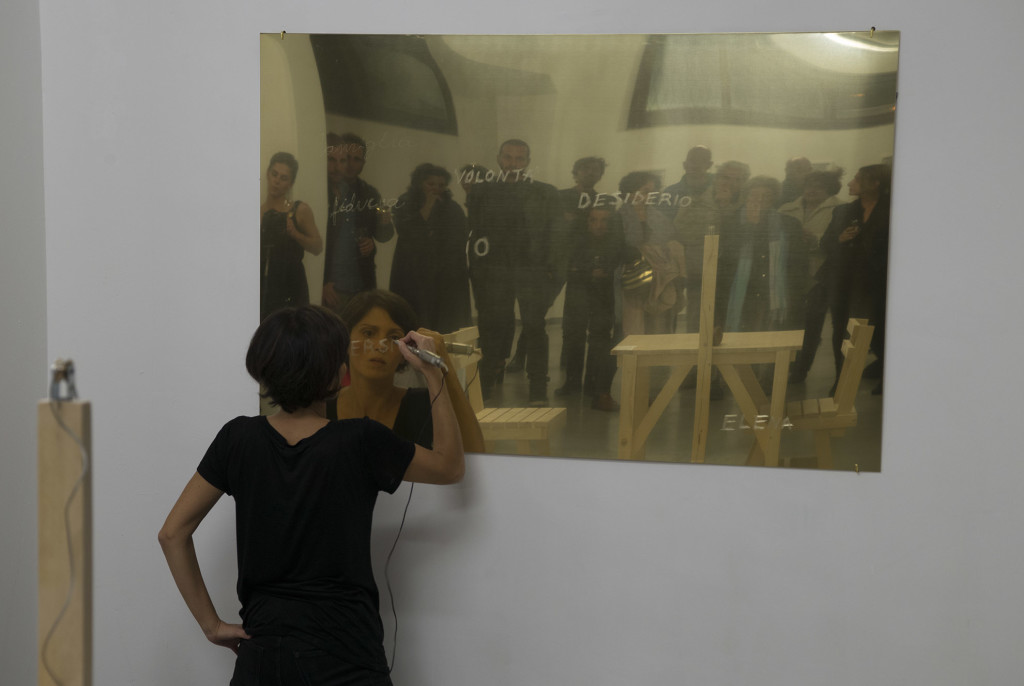 Impero Ottomano (Ottoman Empire) closes the ring. This perform/installation encourages spectators to develop a game of resistance with the artist and reflect upon the concept of psychological and physical resilience. A metaphor for the (arm wrestling) struggle between West and East to see who is more powerful («an issue that is totally present on the menu of the day», Bellantoni points out)[5] and a score that continually asks ‘what is it that resists history and her personal experiences’, Impero Ottomano is a relationship between the artist and her audience – a bilateral shift in which what is public goes private and what is private goes public. The work itself is a table, a mechanical arm worn by the artist to bolster her physical strength and a series of brass plaques to be fastened to the wall during the opening – she invites spectators to take on «a woman with an arm that has been altered by a mechanism (a simple wooden structure with a spring) who opposes resistance»[6]. [The artist asks the same question during the physical challenge (what is it that resists?) with the goal of pushing an adversary towards a psycho-physical challenge and invite him or her to conceive a dual response (the words are handwritten onto the shiny oval-shaped brass plaques) for the purpose of establishing contact with the resilience that – day after day – confronts tyranny, trauma and pain created by modern society].

The itinerary offered by the artist in this new aesthetic programme places an emotional (intimate!) segment at the heart of her reflections that closes into a conversational order which is meta-linguistic and expressive on many levels in function of the building of a visual parabola whose design is the compass that aligns the spectator amongst the simple stories of the “quotidian”  (and quotidian is «an extraordinary word that suggests the depth and range of the commonplace» in the words of Don DeLillo), of an argument in which the events of an individual mould the stories of an entire species in order to build memories, recollections and the chronicles of a diary (perhaps even a book on contemporary history?) that has yet to be concluded through the use of the essential aesthetic multilingualism[7], typical of today’s (and tomorrow’s) art. With a silence that bathes the mind, Elena traces a path – luminous and dark at the same time – that makes use of metaphor, metonymy, insinuation and synthesis to conceive reckless and conscious appearances where uncertainty and certainty are fused to the point in which they are lost in that bitter conquest that St. John of the Cross teaches us can only be a work of darkness. 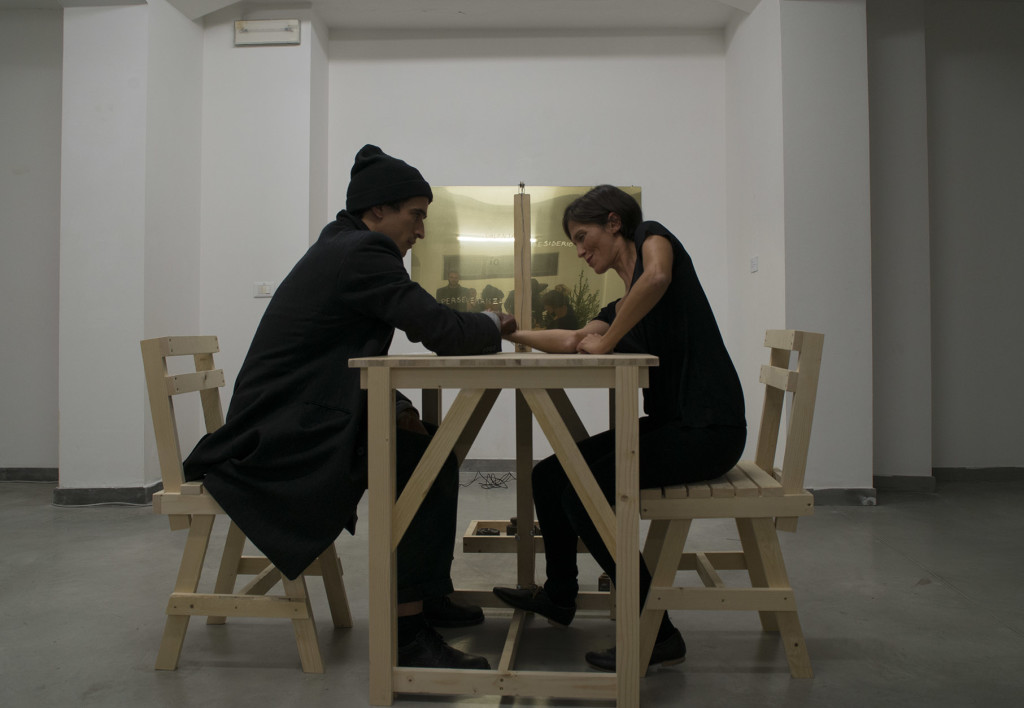 [3]   E. Bellantoni, Concept del progetto, from an email written by the artist to L. Zappacosta; the subject was Re: Giornata del contemporaneo, received on 15 September 2015 at 1:48 a.m.

[7]   This expression was coined by the author and deposited at the patent office, © Antonello Tolve.

Elena Bellantoni. Lucciole, curated by Antonello Tolve, Alviani Art Space, Pescara, Italy, 10.10 – 21.11.2015 (this essay – translated from the Italian – is the text written by Antonello Tolve to accompany the exhibition)