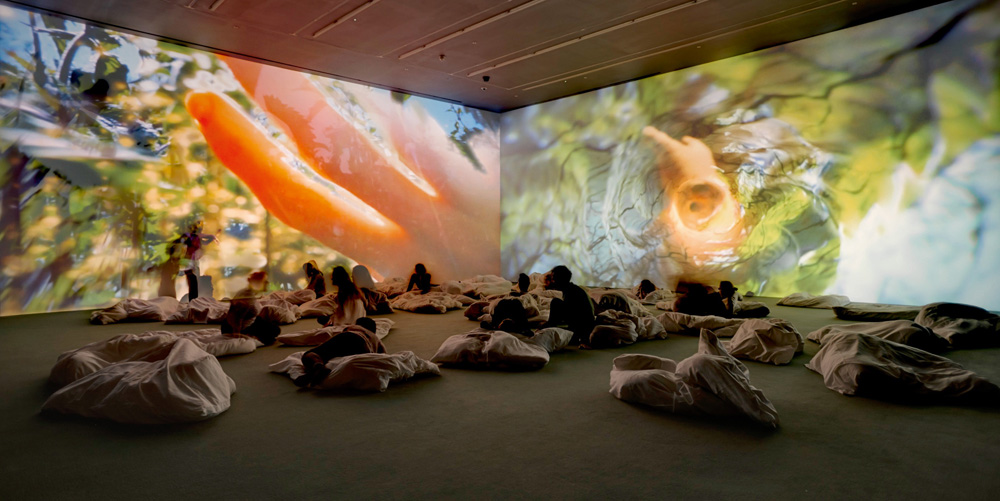 A map and a small torch for reading in the dark: this is what the visitor is given before going into the exhibition at the Kunsthaus in Zurich dedicated to Swiss artist Pipilotti Rist (born in Grabs, 1962). Immediately on entering, we step out of natural light and into the darkness and multitudinous artificial lights and colours which have turned a 1400 square metre space into an enormous habitat of visionary atmospheres. Here we move in a labyrinth of video installations, with no order – chronological or any other kind – but simply wandering, enraptured by the images and the music. Even though the show covers Pipilotti Rist’s entire career, from her first videos in the eighties to works created specifically for this occasion, it cannot be called a retrospective in the classic sense of the word, because individual works produced at different times are brought into dialogue with each other, interacting in a single vast environment. Indeed, the event, curated by Mirjam Varadini, rather than a show, could be defined as a large-scale installation in which the artist has collaborated in person. 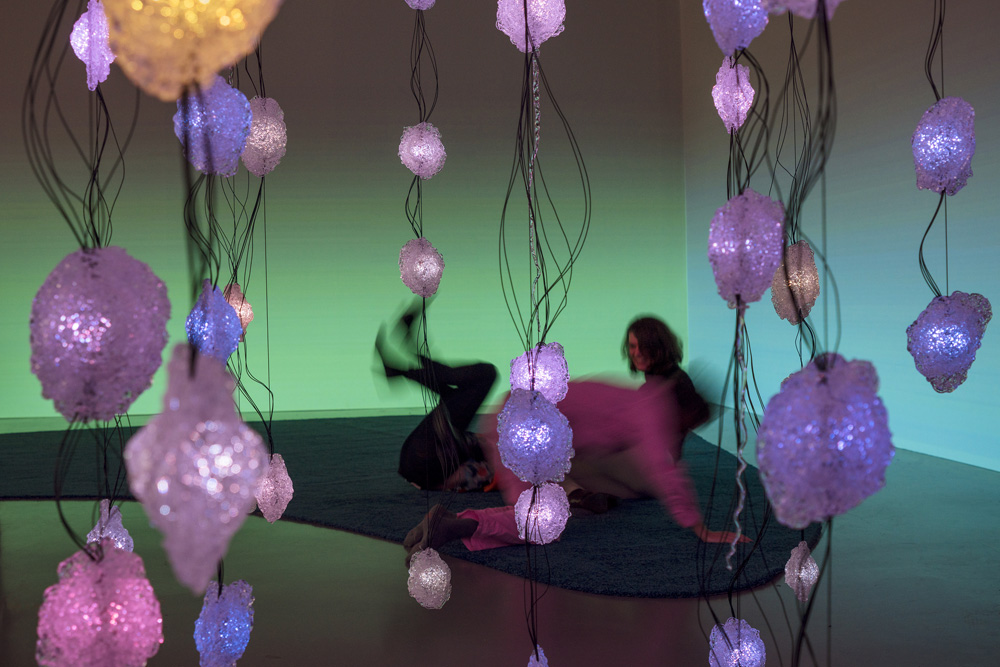 From the early single-channel videos, shown on a dedicated wall at the edge of the exhibition space, we continue to video installations, not only large-format projections but also moving images which the viewer finds concealed in unexpected objects, as in Yoghurt On Skin – Velvet On TV (1994) where tiny monitors are hidden inside shells and handbags. Everyday items, which Pipilotti Rist began using in the mid-nineties, are combined to suggest a domestic ambience that attracts us yet can be unsettling at the same time: thus, right in the middle of a living room she gives us a shapeless rock transformed by coloured light projections (The Patience, 2006). And how to react on discovering the explicit images of Pimple Porno (1992) inside a child’s cot? Or when we sit down in an armchair beside an elegant lamp, only to discover that the lamp conceals a projector which turns our lap into a screen (Lap Lamp, 2006)? And what about the huge lampshade whose luxurious-looking shape is actually made from the used underwear of the artist’s friends and family (Cape Cod Chandelier, 2011)? These alienating associations in a surrealist vein plunge the viewer into a dreamlike atmosphere, whose most fitting example is perhaps Do Not Abandon Me Again (2015), a double bed upon which visitors can lie to be bathed in images projected from the ceiling. 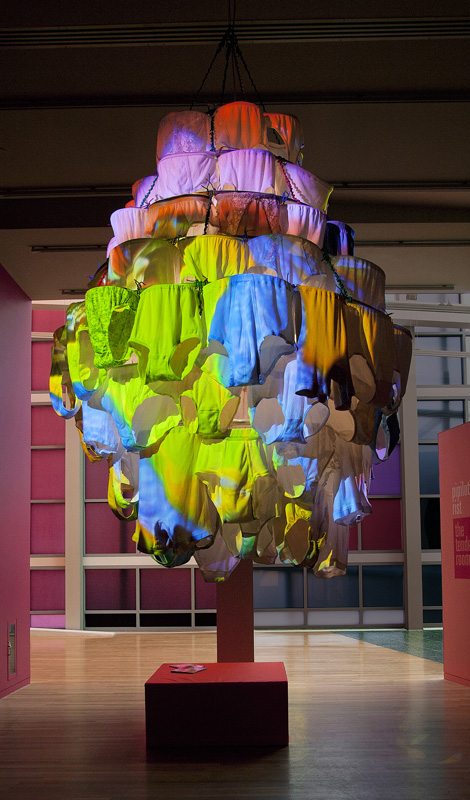 At first sight, Pipilotti Rist’s unsettling world, which exposes taboos and irreverently challenges social conventions, may generate a sense of unease, but it never lacks a healthy dose of irony, already present in one of her very first videos, I’m Not The Girl Who Misses Much (1986). Here the artist flaunts herself in a reinterpretation of the Beatles song Happiness Is A Warm Gun,  at altered speed and dancing like a wild thing.

The fundamental aspects of her work can already be seen in this video: exposure of the body in the most intimate or unconventional ways, the primary role of music and, lastly, experimentation with the technical possibilities of video. 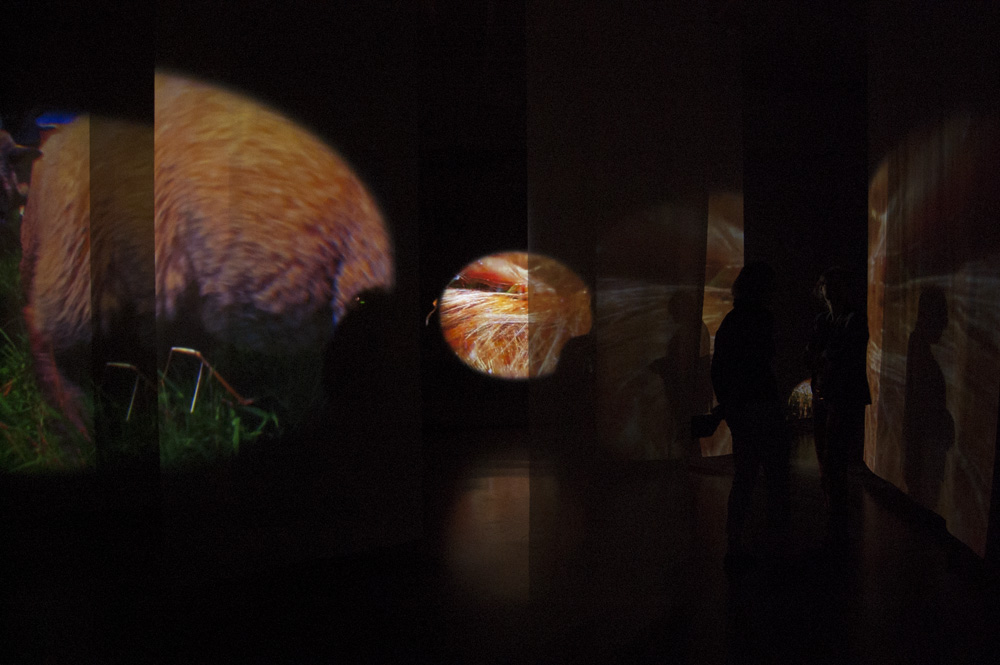 As regards the first of these, in her early works the artist aimed the camera at her own body; whereas she now collaborates with Ewelina Gruzik, her inspirational muse and – according to Rist – the symbol of humanity as a whole. Gruzik is the protagonist of Rist’s first full-length film, Pepperminta (2009) and also the naked body we see fluctuating in her grand “electronic fresco” Worry Will Vanish Horizon (2014), a double projection which towers over viewers lying on the floor, enveloping them in a dreamlike ambience. As is customary in her work, it is not only the images which impress, but also the music, composed by the artist herself and Anders Guggisberg,  with whom she has worked since the mid-nineties. The exhibition title, Your Saliva is my Diving Suit in the Ocean of Pain, is taken from one of their songs, and refers to the body’s organic fluids (saliva, but also, and especially, blood), which Pipilotti Rist displays with extreme natural ness.

Many formal and musical aspects of her work arise from the pop culture of MTV; she herself was a member of the all-female band Les Reines Prochaines (1988 – 1994) and has used cover versions of some very famous songs as soundtracks for her works. Among these we cannot fail to mention the musical accompaniment to Sip My Ocean (1996): a revisitation of Wicked Game by Chris Isaak. Here again, a double projection covers two adjacent walls, using symmetry to create psychedelic and kaleidoscopic images of an idyllic aquatic world. But once more the disturbing aspect takes over, with a hysterical “I don’t want to fall in love with you”, in defiance of the original song’s gentleness.

In these large-format projections we see the emergence of the final aspect which informs all Pipilotti Rist’s work: technical experimentation. If her early single-channel videos were an attempt to creatively exploit the limits of the medium by exaggerating the colours and interference on magnetic tape, later on, the artist will fulfil her dream of taking video out of the 4:3 of the cathode tube monitor. A large portion of the Kunsthaus exhibition space is occupied by Administering Eternity (2011), which consists of a labyrinth of gauze panels on which a series of moving images are projected: animals, fruit, leaves; the natural universe reinvented by the artist’s use of technology. 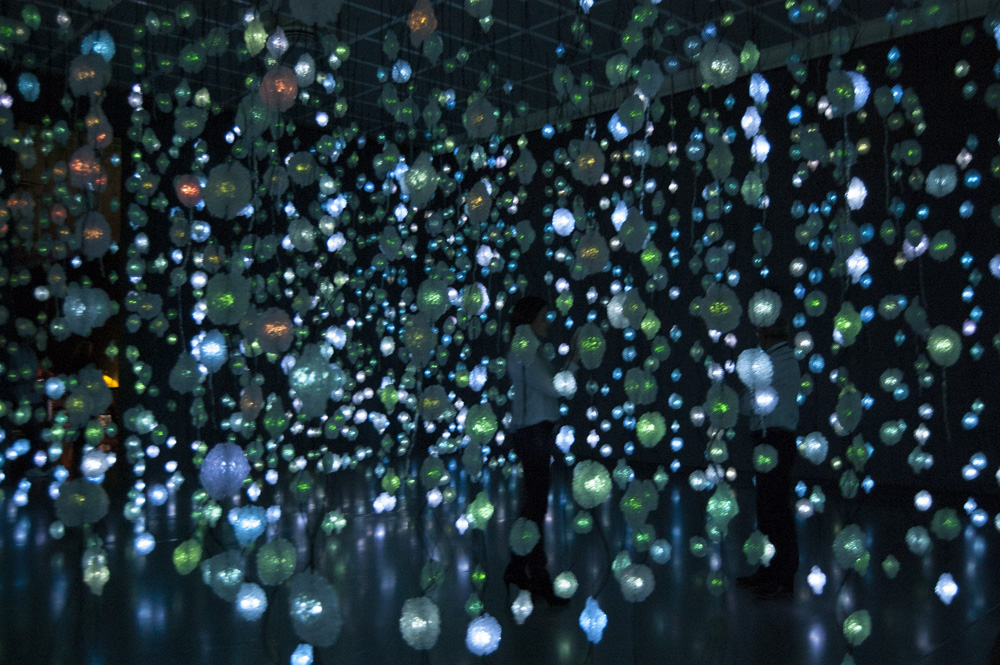 The dialogue between nature and technology is effectively exemplified in one of the works created specifically for the Kunsthaus show. This is Pixel Forest: 3000 LED lamps, suspended  from the ceiling and each synchronised with a video signal, create an artificial forest which changes shape constantly. Here too we are invited to a kind of naturalistic exploration as we enter the space and pass through the installation. The artist has defined Pixel Forest as “an exploded screen in the room”, a video which has not only come out of the monitor, but also surpassed the two dimensions of the wall. Nature, ever the source of inspiration for artists, relives here in a totally artificial form, generated and manipulated by technology.

This review and reflection on Pipilotti Rist’s work refers to the solo show Your Saliva is my Diving Suit in the Ocean of Pain, recently depicted at Kunsthaus Zürich  26.02 all’08.05.2016, and curated by Mirjam Varadini