The Word in Video Art III

Arshake is pleased to present the last of three dates with Francesca Gallo, who takes a historical look at the role of the written and spoken word in video art. Please visit here the first part of the essay and here the second part.

…Despite the points that have been made several times, the language of words also can play a narrative role in art video. There are numerous examples of this; one of my favourites is Measures of Distance (1988) by Mona Hatoum, in which the mouldable nature of the electronic image is a contributing factor – it contains a skilful mixture of biographical and political elements. Images, voices and languages, written words and time are intertwined in the video, which paradoxically consists of a series of fixed images fading in and out. In each frame, extracts from letters between the artist and her mother are superimposed on blurred images of the latter in the shower. In parallel, the soundtrack alternates between the recording of the two women’s conversation in Arabic, and Mona Hatoum’s voice reading the English translation of her mother’s letters recounting family life in Beirut in 1981, and confiding her reflections on questions such as the relationship between the sexes and personal identity. In the overlaid visual, the handwritten text almost becomes the equivalent of a veil interposed between the camera and the naked body, whose female traits evoke sexual and maternal archetypes rather than inviting voyeurism.

In the visual register of Measures of Distance, then, we already have the recurrence of explicit identifying signs – such as Arabic script – written on sheets of paper which the electronic format reduces to a faint grid, a kind of mesh that seems to sustain and contain at one and the same time, emotions, words and memories entrusted to the correspondence between the women. Speaking of which, we need to bear in mind that Arabic, Persian or Indian script, and also Chinese and Japanese ideograms, have been used by artists as identifying elements, particularly from the nineties onwards, as part of a growing emergence of extra-European artistic expression, which extends also to video art[1].

In Mona Hatoum’s video, as in others which use the exchange of letters, we detect the echo of one of the early films by Chantal Akerman, the experimental Belgium filmmaker who died recently. In 1977 she made News from Home, using her own voice off as soundtrack as she reads the letters written by her mother while she was living in New York. The voice is often drowned out by the direct recording of the sounds of the city, as the visuals consist of a montage of long, fixed camera shots of the places frequented by Chantal. In this film, unlike the other videos I’m showing you,  the correspondence is one-directional, in the sense that Chantal only has the letters sent to her by her mother, and uses only these, giving us an incomplete dialogue, lacking the letters written by the daughter. This makes the overall result unbalanced, like a forced soliloquy, an unrequited request for contact.

Correspondence by letter is also the central theme of Sophie Calle’s monumental work Take Care of Yourself (2007) presented at the 52nd Venice Biennale, which probably contributed to the growth of a new interest in the language of words in video.Sophie Calle is one of the artists best-qualified to appear in this selection, as she began her career in the field of Narrative Art, where photographic documentation and written text converge in the description and narration – more or less fictitious or poetical – of biographical events, experiences, stories and so on.

Calle was invited to represent France at the 2007 Venice Biennale and, with the help of like-minded curator Daniel Buren, she set up a kind of Borges-type library in the French pavilion, a labyrinth of sounds, images and texts. A choral staging of the feelings of desperation, loneliness and pain associated with the end of a relationship. The protagonists are a hundred women, engaged by the artist to develop their own personal and professional responses to the email sent to Calle by her lover when he left her. While some of the women choose to write to Sophie, or talk to her, others prefer to sublimate their identification with her feelings by dancing, performing or composing music. Take Care of Yourself, in fact, is not a piece of video art, but rather a multimedia installation where video plays a major role because it shows the countless different ways in which these women react to the same message: some write, some speak, others dance or sing.

Here paper-based correspondence has been replaced by email, but the lack of balance remains, there is no real exchange of messages but rather the individual and personal response to the email sent to Sophie Calle. And so there are many voices for us to stop and listen to; not all of them speak, many force us to read or interpret the movements of their bodies[2].

Another instance of focus on peer exchange of correspondence occurs in one of the best-known works of Japanese video art, Video Letter (1982-83), which is a compilation of the real video letters exchanged by two celebrated Japanese writers and poets, Shuntaro Tanikawa and Shuji Terayama. The video letter was an extremely widespread genre in Japan, and the two writers were invited to participate in the project by producer Katsue Tomiyama. Their correspondence concludes in a natural, but dramatic manner, with the death of one of the correspondents.

The video – consisting of 16 fragments/letters, in alternating order as they were sent, as indicated by the heading of each one – reveals aspects of the protagonists, both through their voices – instead of writing, each records what he wishes to say to his friend – and through images: personal photos, objects, details. Despite the different tones of voice and linguistic registers, and in spite of the initial pretext, the viewer frequently becomes confused, unable to distinguish which of the two is speaking, as perceptively noted by the critic Raymond Bellour, who can be attributed with bringing  the work to the attention of western audiences[3].

Such frequent shifting of identity is also due to the fact that the director, Katsue Tomiyama selected for Video Letter certain fragments of letters in which the writer ponders on his own identity,   lingering over photos and identity cards and details of his own body; and this kind of existential questioning often compares the writer with the recipient of the letter. The result is indeed a blurring between the two. 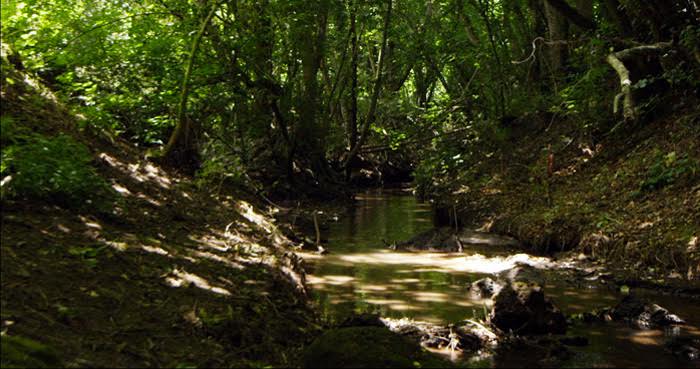 Regarding the dual nature of correspondence, I’m happy to mention the work of Donatella Landi, an Italian artist who works with various media but has a definite predilection for sound installations and video. In her most recent work, the language of words plays a fundamental role, but not in the way we might think: in other words, not through actors playing themselves or others, but rather in the adoption of the voice off, while the camera explores the detail of undergrowth as it turns slowly around. This is the case in Mio Caro, Mia Adorata, a long video made in 2013-2014 and recently presented at the Auditorium Parco della Musica, in which the filmmaker retraces the intense young love between her parents[4].

Before the couple were married, events imposed a forced separation on them for several months, and they exchanged passionate letters, with that ardour and faith in the future typical of a certain phase of life and love. However, in the video the emotional component is sublimated in the landscape, and nothing is revealed of the protagonists, nor of the person who lends them their voice, always off-camera.

Landi had previously dealt with the intimacy of love between couples in her 1999 work Je t’aime, je t’aime a simultaneous double projection of a man and a woman who declare their love, repeating the phrase of the title. But what makes it unique is that the viewer finds herself in the middle of a disturbing exchange of personalities, because the image of the man has a woman’s voice, and vice versa.