Today, the seventh of eight appointments with the critic reflection by Antonello Tolve who retraces the complex relationship between art, technology and nature, by surveying a number of artworks connected to the relation man/environment, from Land Art to Transgenetic Art to Bio Activism. 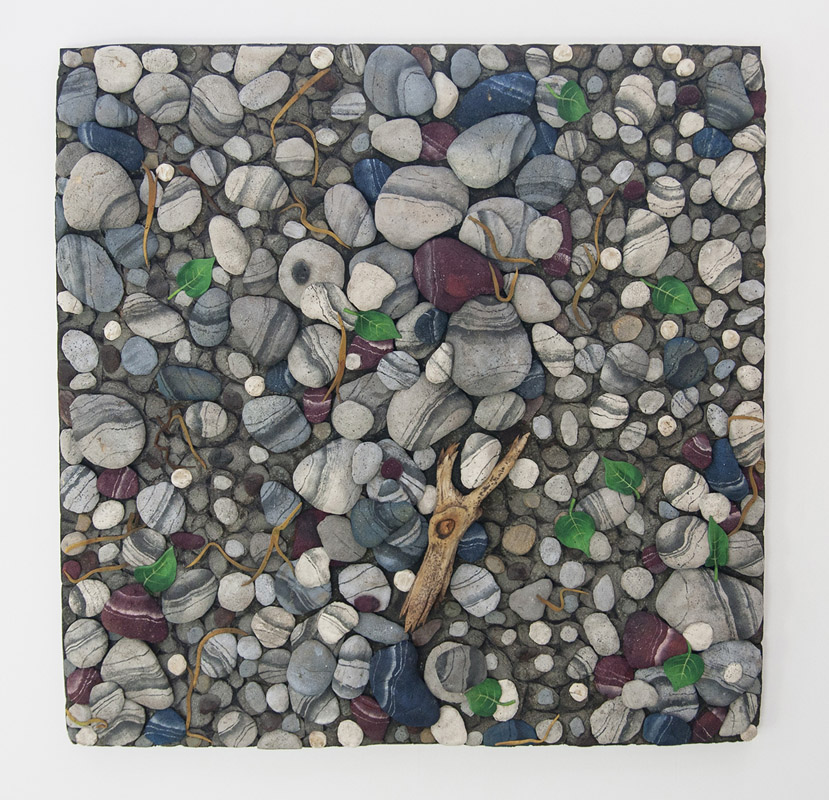 Along the lines of the projects addressing the metamorphosis and the decontamination of landscape that we have seen so far, we can find several instances of ecosustainable architecture intersecting the history of gardens, including their contemporary typologies. Seen as a valuable tool for the return to an anthropological and existential place; or as an intellectual space where the interests of single disciplines are sacrificed to leave room to collaborations aimed at the restoration and enhancement of the urban and extra-urban fabric, the strategies suggested in the field of urban studies and architecture – strategies interdisciplinarily incorporating contemporary art since the moment of planning and not treating it as mere urban decoration – today are at the avant-garde on the aesthetic as well as on the functional standpoint. To inquire on a site and to present it to the public as question (Buren)[1]; to stimulate society visually; to suggest new existential multifarious possibilities – all represent the paths beaten by a new community of artists improving the urban, architectural, landscape, social quality, turning their works into a practice in culture and cultivation.

The ecologic establishment of Gartnerhof designed by Helmut Deubner; Herzog’s social houses on Linz’s Holzstrasse; BedZED Residences by Dunster in London; Eble’s Scharbruhl area in Tübingen; or the new idea of school realized by Anna Heringer and Eike Roswag (the METI – Modern Education and Training Institute in Rudnapur, Bangladesh): these are all models of bioarchitecture[2] designed to optimize the relationship between a building and its context, to preserve the surroundings, to use natural resources (water, vegetation, climatic conditions) with moderation, and to favor a community’s psychophysical well-being. 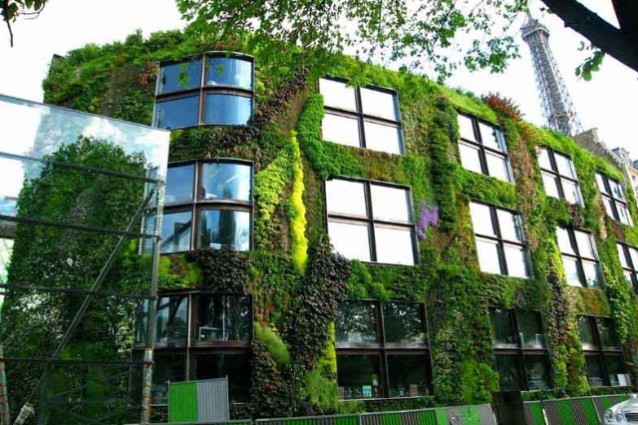 A clear example of these architectural strategies is the vertical garden designed for the entrance wall of the Musée du quai Branly in Paris, one of the world’s top institutions devoted to the arts and the early civilizations of Africa, Oceania, and the two Americas. For this project, Jean Nouvel appointed botanist Patrick Blank who, following the whole architecture concept (40,600 sq. m. divided in four parts symbolizing four continents), covered 800 sq. m. with a blanket of different plants coming from China, Japan, USA, and Central Europe. This surface presents itself like a majestic living tapestry, a breathing wall, or an actual vertical forest. Covered with a metal frame sustaining some PVC slabs that in turn support two layers of felt so that the plants’ roots can anchor and develop, the museum façade along the Sein is a large garden of 650 sq. m. cloaked with over 15,000 plants of almost 200 different species from all continents. 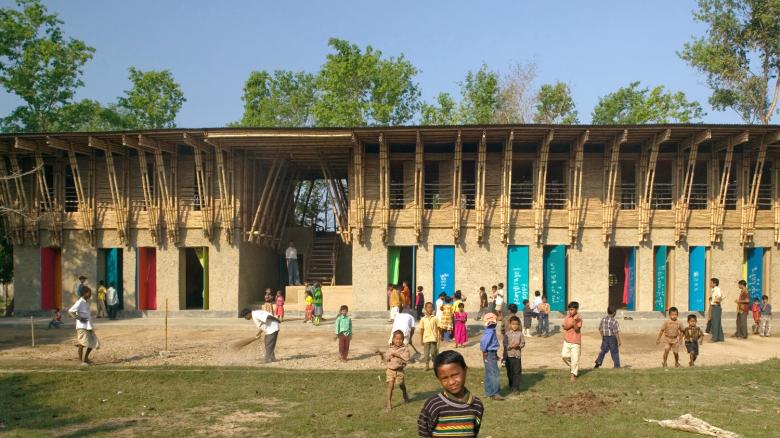 Jean Nouvel Pritzker prize project is not just a museum architecture, but also an ecosustainable complex that, thanks to solar panels on roofs and façades and to geothermal probes in the subsoil, contributes to making the viewers’ visual impact ‘greener’. It invites them to take part in an exemplary show and, at the same time, to reflect on the livability of cities (on the ways in which they are planned and designed), on the role of new technologies serving society, and on the world’s future. [Not unlike the style (and the spirit) to which by Patrick Blank’s walls expose us, is the effect brought about by the huge botanic sculptures such as Jeff Koons Puppy (1992-1997), a 12 m tall West Highland terrier covered in flowers and guarding the Guggenheim’s main entrance in Bilbao.] In Italy, we have a similarly interesting example with Piero Gilardi who, with his PAV/Parco d’Arte Vivente [Living Art Park][3], continues his tappeti natura (carpets leaning forward to the world and becoming living and pulsating matter, live gazes “on a lost space and, at the same time, ‘faith’ in science”[4]), but also opens to a new communal strategy that has been actualized in the outskirts of Turin, vigorously imposing itself as an extra-museum site specific action taking care of the site and its inhabitants. 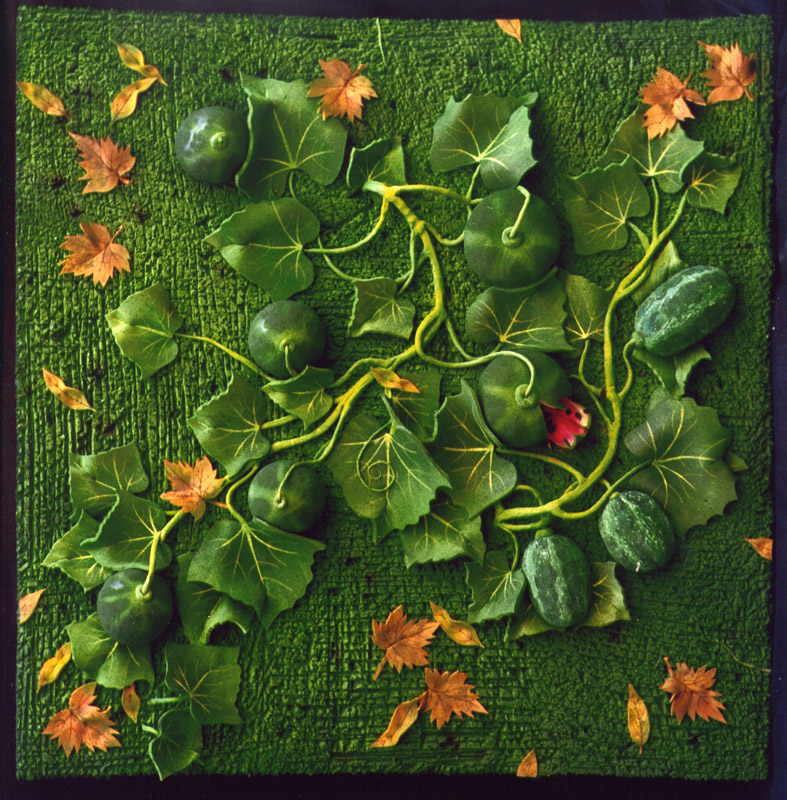 The goal is to educate the community through art on topics such as man’s basic needs, ethics, politics, ecology: “in a mobile relation between art, science, and active participation” that represents “an act of opening to life, its processes and transformations.”[5] Born in 2003 (after the experience with IXIANA[6]), in the immediate aftermath of the international conference devoted to topics spanning Dalla Land Art alla Bioarte[7] [From Land Art to BioArt], PAV focuses on “the living” seen in its wide array of forms, so that within the same aesthetic corpus we find nature, art, and new technologies all intersecting together – a tripartite formula that in an ex-industrial area of 23,00o sq. m. has generated a jardin en mouvement, like Gilles Clément would say, whose “changing moods”[8] disclose a planned project connected more and more to bioma, ecosoft, body/environment relations, evolution, metamorphoses of the habitat, and, finally, to the very ethos of the living[9] that constitutes, I believe, not just Gilardi’s idea but also the hope, the cultural light of the world to come.[10]

[6] Progetti / Parco d’Arte, in «parcoartevivente.it», accessed on 25 August 2015, at ore 7.47 pm: “In 1985 was launched a new artistic reasearch wit new technologies through the creation of Project IXIANA that was presented et Parc de la Villette in Paris and envisages a techonological park where peope could experiment artistically digital technologies.”

[10] I am here developing some reflections I published in my La linea pedagogica dell’arte contemporanea. Macerata-Rome: Quodlibet, 2015.

The Word in Video Art III