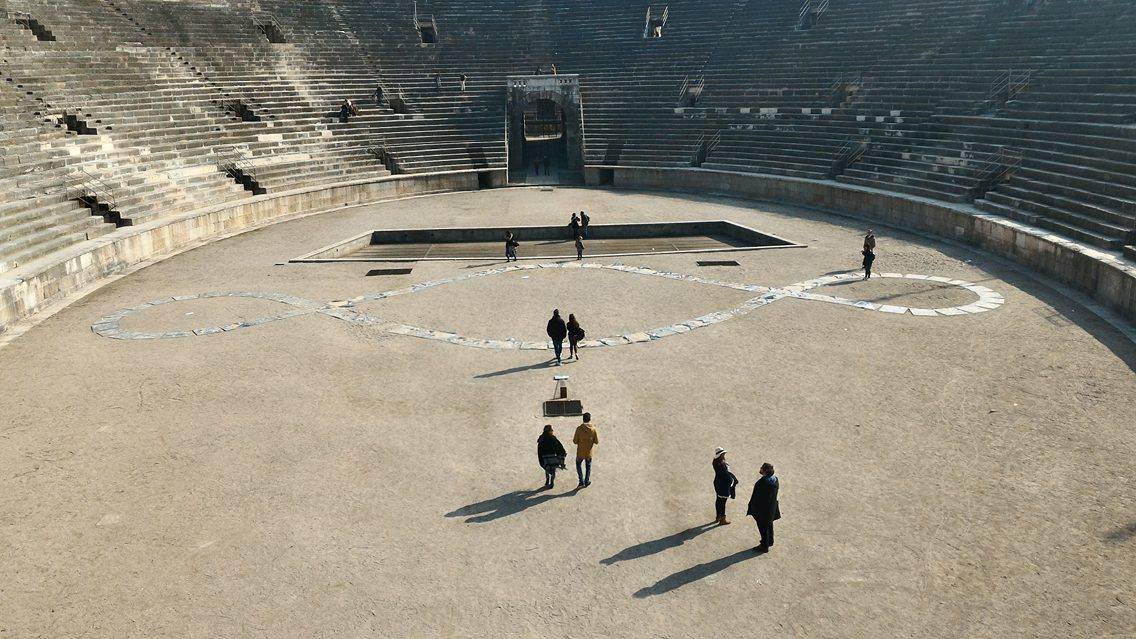 Michelangelo Pistoletto’s temporary installation in the Verona Arena is a work that establishes a profound dialogue with a time and a space of historical and social significance.

The Arena is part of the spirit of time past, a genius loci which in the present has become a catalyst for sociability. It is therefore a place in which one can perceive “the historical energy which”, according to the artist, “unites with the present and creates an image of the future”.

Ninety-six square units are repeated in the space and make up the trinamic symbol of Rebirth, the Third Paradise which is the balanced union of artifice and nature and at the same time a new phase for humankind, “an unprecedented level of planetary civilisation”, Pistoletto writes, “which leads each individual to take personal responsibility in the global vision”. The materials from which the work is made encapsulate and explain this: recycled wood is wrapped in an extremely fine layer of aluminium, a reflective and technical substance. In this way a happy marriage is achieved between artifice and nature, two worlds combined by the artist to generate an atmosphere suspended in time and space.

Visitors entering the Arena and seeing Terzo Paradiso from above feel they’re inside a protected garden (which is also the deepest and most ancient meaning of the term paradise), and the artist invites every viewer to become a gardener in order to “protect this planet and take care of the human society that inhabits it”.

Between its inauguration and the present day, the work has changed in appearance due to the actions of humans and atmospheric agents: the terrain of the arena has turned the aluminium film opaque, and it has ripped in several places, allowing the natural colour of the wood to show through. In fact, from the upper rows of seating the only thing visible is the sections of aluminium which have become detached and are lifted by the wind, reflecting the sun and magnetically attracting the attention of visitors. Groups of kids sitting on the steps, tourists, or children jumping from one square to the next; nobody remains indifferent to the installation. And this is perhaps the most important goal achieved by the artist in this setting: all who enter Verona’s Arena cannot help but wonder about the meaning of this symbol that consists of three interlinked circles and is – as Pistoletto maintains – a “reconfiguration of the mathematical sign for infinity”.

The Seven Leagues of Art