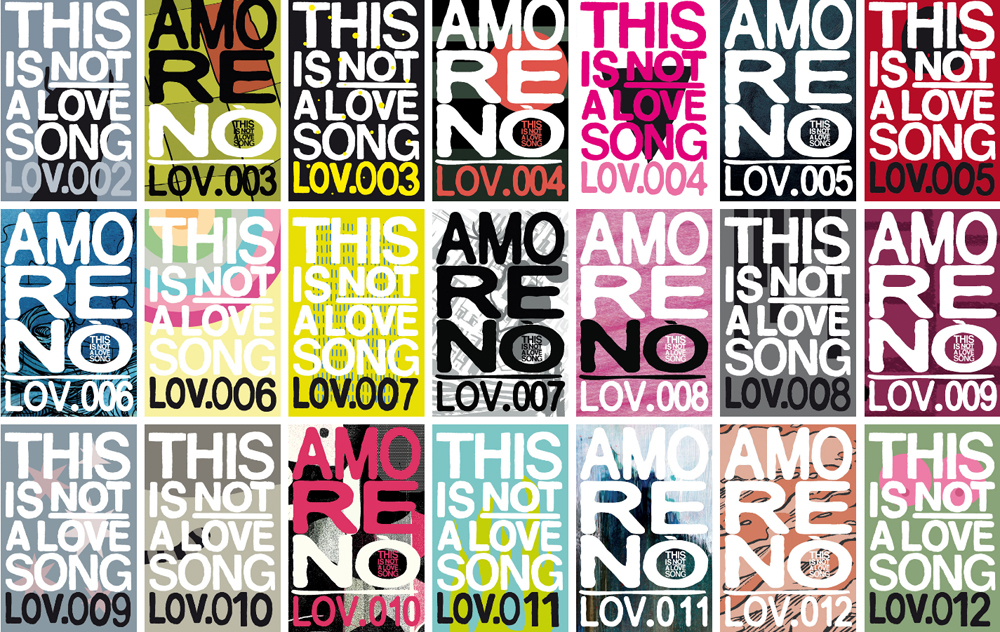 The TINALS (This Is Not A Love Song) project started two years ago with the genius of Andrea Provinciali e Brizio, and immediately experienced well-deserved success.
TINALS are real music cassettes, at least real in terms of their outer packaging (transparent plastic case and folded paper inner), each dedicated to a well-known love song which has served as the inspiration for cover versions by musicians of various genres and for cartoonists and illustrators for the inner sleeve.

The return to the phonographic medium, the music cassette in this case, is an important sign to be considered in light of the fact that the TINALS do not contain tapes, because the cover versions are downloadable as mp3s from the website.  However, the indication is that the desire to touch, to own a medium still exists; the urge to read the credits or the lyrics of a track, to imagine, associate an image with a song – a bit like the way it was in the 80s with real cassettes, and before that, with vinyl discs and their covers.

Susanna Buffa: Whose idea was it to link well-known music to a new graphic guise, as you have done?

Andrea Provinciali: the idea came from me, after a eureka moment on Google Images.  But I should start at the beginning.  In 2010 I conceived and edited a book for Arcana entitled Tiamottì!  – 11 Italian love songs in comic strip format (the title explains the concept perfectly, and it’s the same as the TINALS idea). Two years ago I wanted to add a “foreign” sequel to that volume, and so one day, musing about possibilities for the cover, I type “Bad Religion No Control booklet” (because I would have liked that style of graphics) and the search engine throws up on screen the audio cassette, among many other formats, with the booklet fully opened up: a strip of paper almost 50 cm long.  Hence the eureka moment: no longer a book with an imposed choice of songs, but a paper music cassette for each song – in other words, as the project’s sub-heading suggests: every cassette is an illustrated love song. So everyone can choose the song they like best at an affordable price, and restore an essential artistic function to a medium (the cassette) which nowadays – with rare exceptions – is all too saturated in nostalgia.

Since the outset, how many TINALS have been made, and what are you planning to do next?

So far we have produced 69 cassettes of foreign songs and 22 in Italian (the Amoreno series), and we are certainly not stopping there. The potential reservoir of talent is endless, we could go on forever… I’m joking, but for the moment we haven’t set any limits. Love – the only subject that can bring together songs from different genres and eras – is therefore closely linked with the music we find everywhere, even in hardcore punk and metal. But we’re not planning to stop at cassettes. We have recently launched a new series, “/’el’pi/ – Graphic Vinyl” (real LPs in illustrated paper: front and back covers designed to reinterpret the original, posters, new stickers and a story for each one), to date we have released Neil Young’s On The Beach (illustrations by Livia Massaccesi, story by Giamluca Testani), The Beatles’  Sergeant Pepper’s (Dario Panzeri and John Vignola) and Green Mind by Dinosaur Jr (Aka B and Liborio Conca). Plus, in the last few days we have agreed on a collaboration with Prodezze Fuori Area; between us we have found common ground linking music, illustration and football: Anthem F.C. is a publishing venture based on the classic team anthems, which are illustrated using the format of the old 45s (still in paper, and with twelve figures inside, representing the dream line-up for the team). At the moment we have published Rome and Lazio, both designed by Chiara Fazi to coincide with the Roma Brucia festival: a Derby for the capital in pencil strokes.
And in autumn we’re planning a big surprise.  I don’t want to give away the secret, so I’ll just say it’s something to do with cinema.

You’ve also produced compilations; how do you select the tracks chosen for these collections?

Our three compilations were created in collaboration with our friend Luca Benni at the record label To Lose La Track. The first people involved were the groups already associated with TLLT, who chose the songs they considered the most appropriate from the list of the first cassettes we published.  After this we received loads of requests from people who wanted to get involved.  Actually, the illustrated song comes first, and the music covers afterwards.  We’re also working on a fourth compilation.

What immediate feedback did you get from the illustrators you approached for the project?

Completely positive and enthusiastic.  And they said the work made them listen to loads of music while they were drawing, which meant that we immediately reached common ground on the choice of tracks.  I had drawn up a really long list of songs to choose from: lots of the artists found their dream track straight away, while others put forward their own suggestions, freely in line with our tastes. In other words, our project is a departure from the classic route of publishing: a song can be illustrated with maximum expressive freedom.

Were you you always satisfied with the resulting illustrations, in terms of expectations and songs covered?

Of course not.  But the spirit of the project is exactly this: having so many tracks available, we like the fact that everyone can approach a piece freely, without too much forcing. And it’s precisely this heterogeneous quality that makes TINALS so special.  An illustrated song may not do anything for me, but sometimes I see that particular interpretation selling really well.  And vice versa, there are illustrations that I think are fabulous, and yet are not so well-received by the public.  And then there are those cassettes with the perfect pairing of song and illustrations, which everyone loves and which become real best sellers.  Ours is essentially a self-publishing venture, so it’s based on a relationship of mutual trust that becomes a friendship…we have always avoided the publisher-author dynamic, primarily because we’re not publishers and secondly because we like the element of surprise in the stuff that comes our way.  And most of the time it’s truly surprising.  The same thing happens with the cover tracks.

Have you you always chosen the musicians and illustrators, or do they sometimes approach you to get involved in the project?

We started with 21 cassettes, and with illustrators who were friends of ours.  As soon as people started talking about the project we began to receive the first requests. And now, two years later, we are delighted to say we’re inundated.  Partly because it’s allowed us to come across artists we didn’t know before, and who have turned out to be really good.  It takes us a while to get back to them but we do reply to everyone and in most cases there’s a cassette to be done.  With the compilations the same thing happened.

Do you think this project of cassettes linking music and visual art is a sign of the current interest in a product that hinges on the interaction between different disciplines?

We believe the project’s success is primarily due to its publishing format. In other words the decision not to produce yet another book, but instead to give each illustrated song its own container (which coincidentally happens to be the format they were recorded in decades ago): this was the winning move.  It’s this “little” revolution in the container that’s hit the bullseye.  And then of course, playing around with two languages, music and comic strip (the song that’s there but not there…hence This Is Not A Love Song) did the rest. And yes, today’s public is much more attentive to illustration and especially the visual arts, more used to interaction between various art forms.  Although there are still some people who are disappointed when they find there’s no song inside the cassette.

Love is always a central theme in the lyrics of these songs; so why the title TINALS?

As I was saying before, love is the subject that gives us the greatest possibility of including the most disparate songs, both in terms of genre and time of recording: so we can go from Piero Ciampi to Boards Of Canada without too much of a shock.  And that NOT is the true spirit of the project: because the TINALS are not songs (there’s no music) and they are not about love, because very often their meaning is completely overturned by the interpretation in the images. In other words, TINALS operate on several levels: the first is the song, the second is the drawing, the third is the juxtaposition of the two, and the fourth is that it’s all contained within a cassette.

This medium was created to come to life and fit in people’s hands.  Do you know what the fans and the people buying the TINALS are doing with the illustrations?  I’ve seen them in people’s houses, in cars and in frames on the wall, like paintings by famous artists.

We don’t have the faintest idea.  We’re convinced that some people have even tried putting them in the tape recorder (just kidding). But joking apart, we believe the cassettes are perfect as gifts, and the back cover even has lines, just like the old blank tapes, where you can write a dedication.  And then yes, some people keep them in the bookcase, some hang them on the wall, others carry them around. Ultimately, this is a pop object that conceals a world of design inside it.  I have to say too that the cassette format itself, that little coloured plastic box, has a natural fascination that draws the eye: last summer we had a stall at a festival in Pesaro, and an eight-year-old boy came along with his dad and asked curiously “what are they?” (naturally he’d never seen the like). We explained, and his dad opened about twenty of them (choosing the ones he liked) to show him, and told him to pick out two.  The boy went away with Sparklehorse and Arab Strap in his pocket.