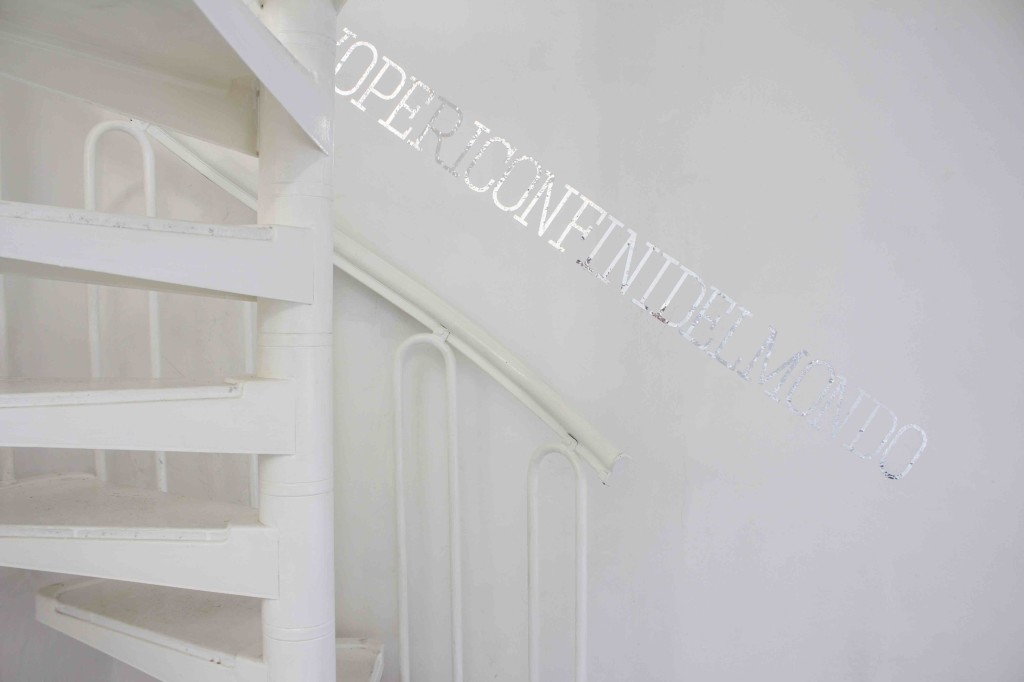 The second branch of the Lavatoio Contumaciale cultural association, an established art venue in Rome directed since the 70s by Bianca Menna (artist’s name Tomaso Binga) is dedicated to the Filiberto Menna archive, and gives new life to the works it contains, opening them up to dialogue with the contemporary, so that present and past are connected by osmosis. Tra(n)sfusioni – this is the title of the project – aims to “stimulate the transfusion of ideas, places, contexts and subjects from different backgrounds with Italian and overseas artists”.

The second instalment of Tra(n)sfusioni, now showing until 7th November, contrasts the artist Luca Maria Patella (1934) with Federica Di Carlo (1984), two generations united by a fascination with the marriage of art and science. Luca Patella is one of the pioneers of experimentation with a variety of techniques (and technologies), drawing on several disciplines including science, alchemy and psychology; Federica Di Carlo also grew up with an interest in science, in particular the physics that connects light to multiple realities and the truth that materialises as light enters the channels of perception. 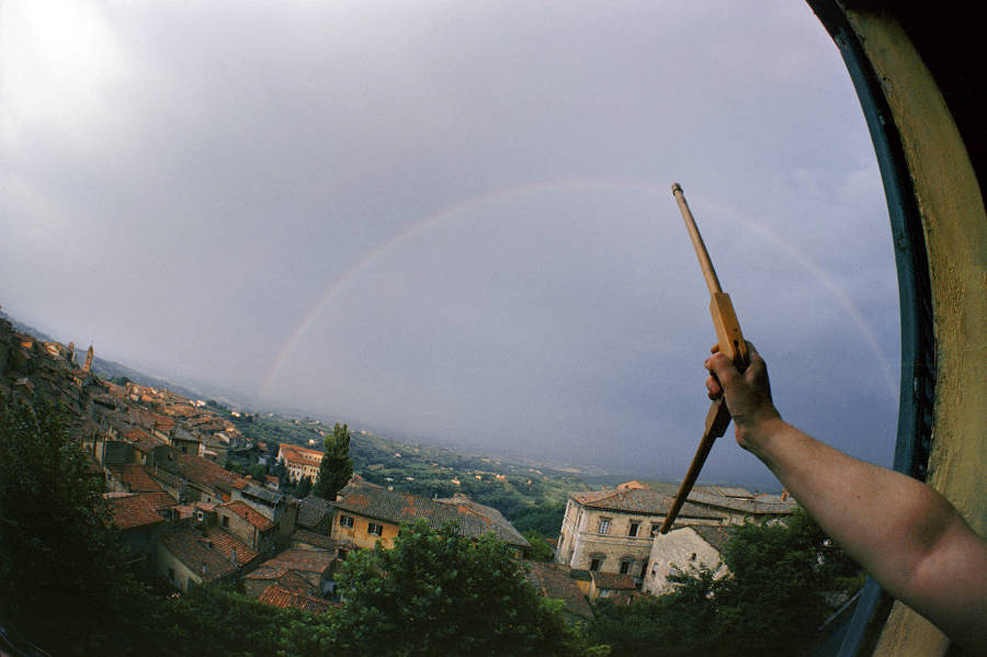 Luca Maria Patella’s 1975 work, Tessitura solare con Arcobaleno, uses photography to capture a rainbow, with the artist’s hand seen in the foreground attempting to track the atmospheric phenomenon. “The contrast between the physical and psychic worlds”, explains the show’s curator Anna d’Elia in her critique, “universe and subject, is always present in Patella’s work and returns in this piece which, by exploring the nature of man’s relationship with the cosmos, can be placed within the wider exploration – ongoing since the eighties – of the Mysterium Coniunctionis (homage to the astronomer friar), in which a modified reconstruction of the microcosm created by Vincenzo Coronelli in 1693 for the Sun King is re-designed in the form of two starry domes, upturned like a pair of cups and flanked by two large canvases depicting the celestial hemispheres and two vases shaped with the features of the artist himself and Rosa Foschi, his companion and art and in life”.

By the sixties, Luca Maria Patella had already freed technology from its mechanical nature and given it creative potential, which shines through in this work, where the faithful reproduction of photography leaves open the question of our ability to “measure” ourselves with the fleeting nature of natural phenomena. 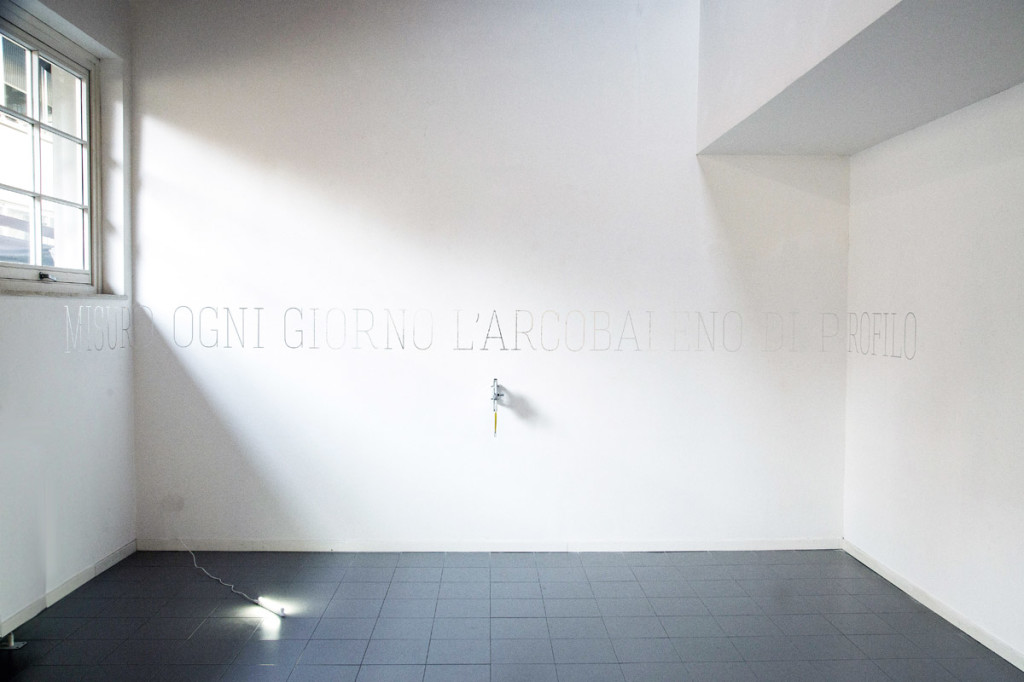 Facing this work from the other side of the same room is Federica Di Carlo’s Misura Diffusa, with its script and measuring tape hand-made by the artist. The work is activated by the interaction of space and light, but also by the viewer, who is invited to participate in the measurement of the space which gives the work its meaning and completion. Here again is the interest in measurement shared by Luca Patella, whose 1967 16mm short Terra animata (from which he extracted a series of photos) consisted of the measuring of a plot of land by two people using white adhesive tape, their movements within the landscape resulting in an authentic behavioural mapping to replace the conventional scientific process of measurement. 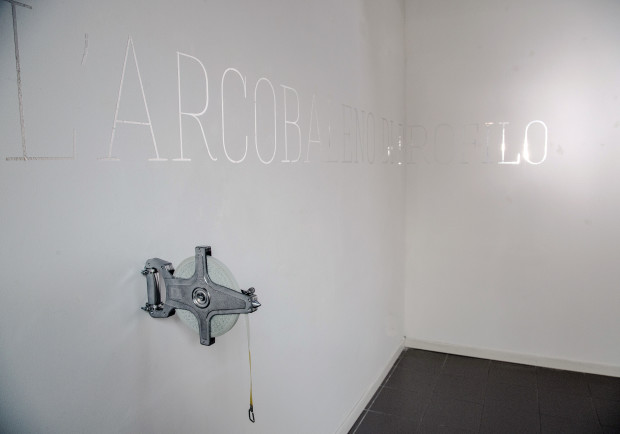 Returning to Federica Di Carlo’s work, we unroll the measuring tape until we reach the other side of the room, exactly where Patella’s photograph hangs. The tape softly unfolds across the floor. Only a few traces of markings and numbers remain. Only when we come to the end point do the conventional marks of measurement appear on the other end of the tape, the point where we started measuring. We might not notice this. And this is the moment when our experience renders the immeasurable perceptible, the immeasurable that resides in the optical illusion created by the photographic eye focused on the hand in the foreground, made concrete and real by the imagination when the eye finds Federica Di Carlo’s words expressing her desire to measure the rainbow “in profile”, endowing it with an unreal objectivity. 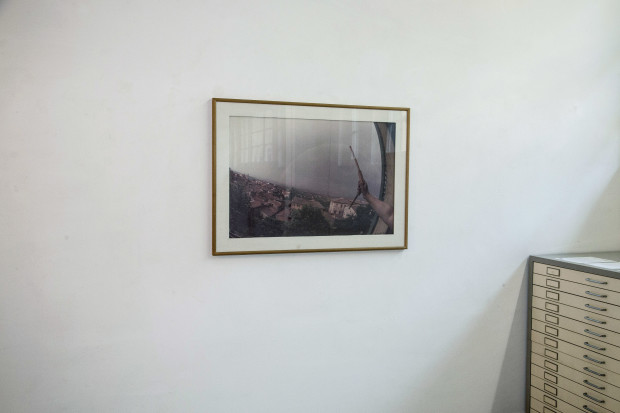 The generational connection finds another link in the artists’ fascination with words: words used within artworks, words in titles which extend the imaginative reality of the themes addressed. In a work placed temporarily adjacent to Tessitura solare con Arcobaleno, Il Mare Firmato (1965), Patella signs a photograph of the sea directly on the photographic canvas. The word is also the protagonist of another piece by Patella, another importante presence in the space and an impartial force in the confrontation of the two artists. This work is MUT/TUM (1965), a perceptual game of words and mirrors which inverts the word MUTT, used by Duchamp to sign his famous Fountain (1917), becoming TUM.

This is one of many interpretations raised by the installation/exhibition and the dialogue between two artists and two generations, causing us to reflect on the exactness of science, on the precision of technology, on the objectiveness of measuring time and things, including the geographical measurement which is the origin of cartography (both paper maps and satellite mapping), or the measurement of time, all of which are really cultural constructs whose objectivity is only apparent. The work and reflection of Luca Maria Patella and Federica Di Carlo put us on our guard, bring us closer by playing on equilibrium between words and images, between reflection and experience, exposing us to the fragility of our existence in the world and thus strengthening us with the power of poetic action.