Trickle Down, A New Vertical Sovereignty at Arebyte

The installation by Helen Knowles at Arebyte Gallery investigate on labour, automation, in the era of decentralised economy of the blockchain

Trickle Down, A New Vertical Sovereignty, is the latest work by UK based artist Helen Knowles currently on show at Arebyte Gallery. The work consists of a tokenised four-screen video installation and generative soundscape attached to the blockchain, which explores value systems and wealth disparity. The artwork is composed of auction scenes, performances and choral interludes by different communities such as prisoners, blockchain technology employees, market sellers, and Sotheby’s auction bidders. Trickle Down, A New Vertical Sovereignty draws on technological and financial power structures which traditionally scaffold the disparity between a wealthy elite and everyday working people but looks to re-imagine our vertically stacked digital ecosystem to horizontally distribute wealth.

The installation commences when a visitor drops a pound coin into a machine designed to expose the mechanisms needed to convert fiat currency into crypto-currency. Each and every member of the Trickle Down community, who has helped the work come to fruition, will receive a share of the ETH via a smart contract on the blockchain. 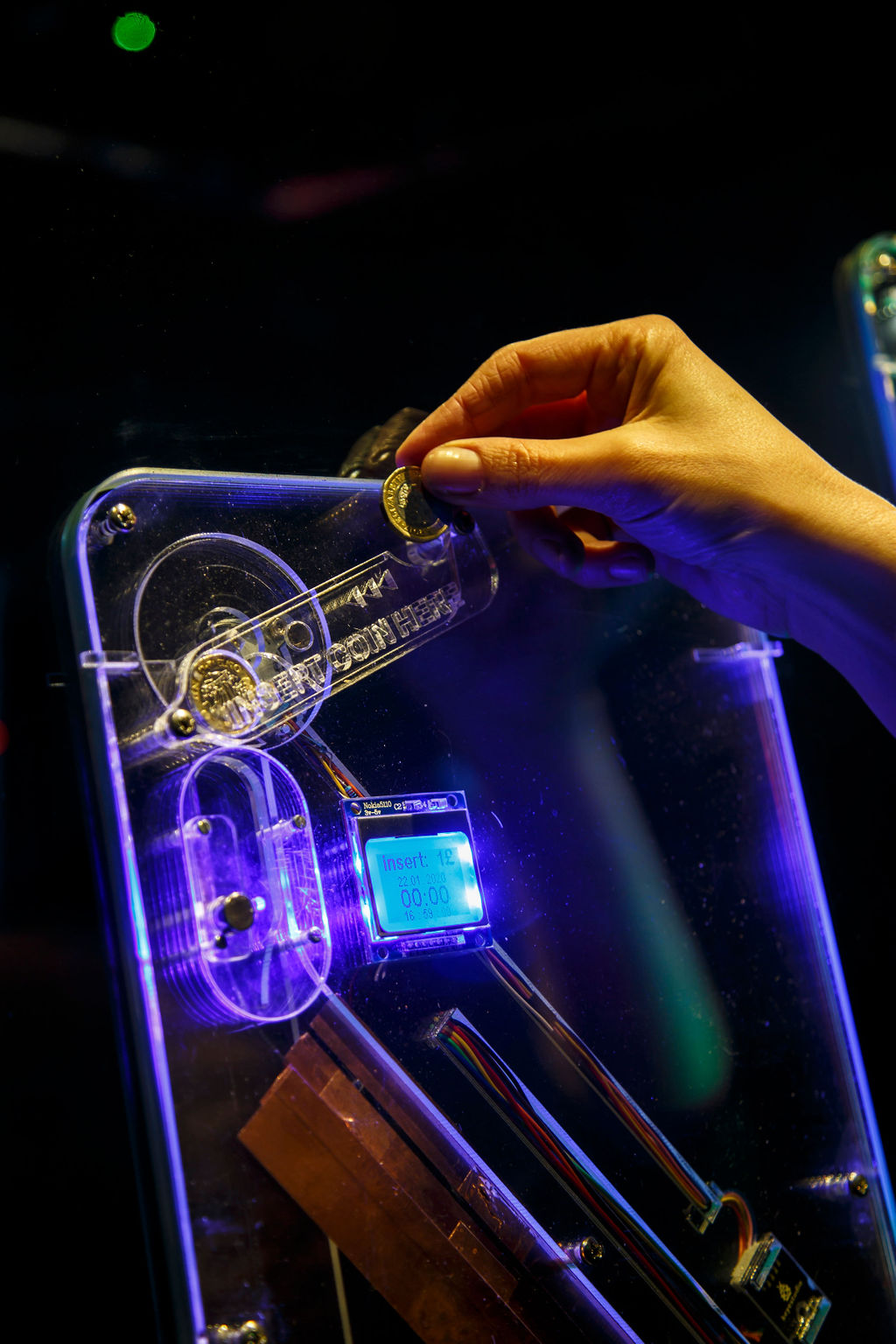 Artist Helen Knowles documented a series of auctions in widely different settings, which reflect the breadth of wealth and financial power individuals in different communities have. These include prisoners at HMP Altcourse in Liverpool, Ethereal Summit attendees, employees at blockchain company ConsenSys in NY, Mancunians at Openshaw market in North Manchester and the Russian community in central London buying their cultural artefacts at Sotheby’s auction house. Knowles captured images of people from these communities bidding, through documenting their attire rather than identities, and with musicians, Arone Dyer and  Denis Jones made audio recordings of them singing. Ultimately, revealing the texture of the communities which represent such disparate economic groups.

Right in the middle of the installation, a machine composed by a large sheet of glass, electronic components, sensors and a coin container, purposely exposes the mechanisms that convert fiat currency into crypto-currency. The sensors, software and electronic components are all exposed, along with a read out of the blockchain ledger. Alongside the machine, Knowles has created a film and soundscape triggered by sensors responding to visitors to the installation. 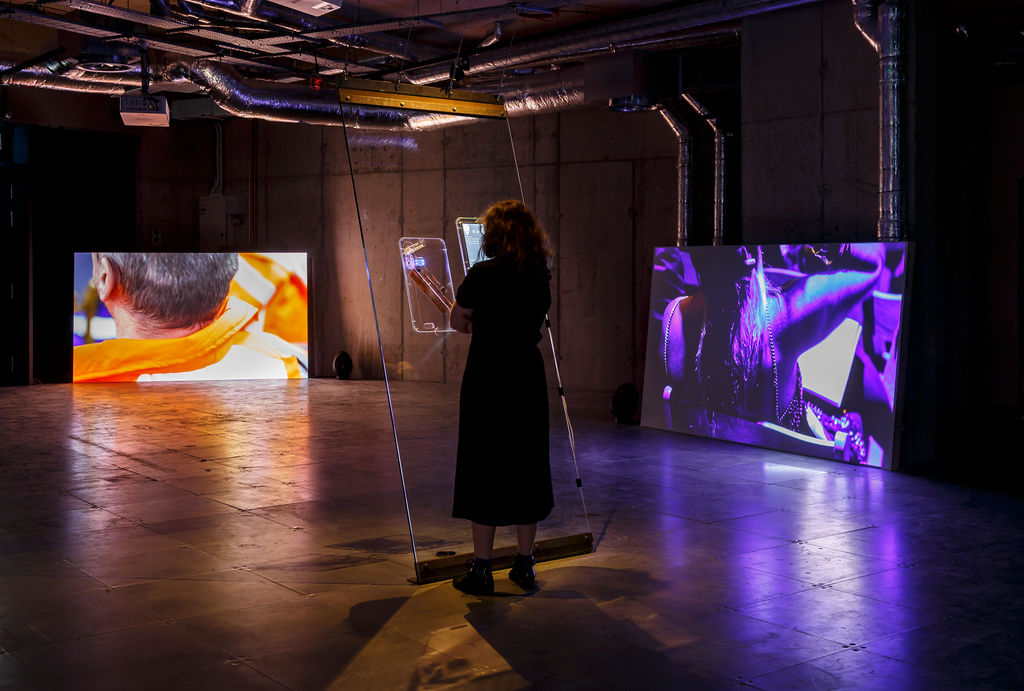 Images of expensive handbags, jewels, fur and beautifully woven fabrics accompany sounds of rising numbers as cultural artefacts are offered for sale. On the opposite end of the wealth spectrum, bric a brac and basic goods are being bought in bulk at the north Manchester market, and prisoners bid with their labour for plants to send to relatives for Christmas, during an auction staged by the artist exploring prison economies.

The soundscape composed by the recordings of the voices and environments of all auctions is generated by drawing on the data history of the movement of the audience in the installation – picked up by sensors scanning the space, reflecting on the blockchain’s transparent and accessible history of transactions.

Each time the installation is played, it will make micro-payments to all participants and people who have been involved in the project, from the inmates at HMP Altcourse to ConsenSys employees and blockchain software developers. This process is reliant on participants supplying their own crypto-currency wallet, questioning: can technology be a unifying force to enable more equality in society or does technology only work effectively for those who are educated to navigate it?

Trickle Down, A New Vertical Sovereignty seeks to explore and provoke questions about labour, automation, value in art, decentralised sharing economies and distribution of wealth. (from the press release)

Trickle Down, A New Vertical Sovereignty is an artwork by Helen Knowles, supported using public funding from Arts Council England. The artwork is produced by FutureEverything with additional support from Whitworth Gallery, The University of Manchester, arebyte Gallery, FACT and One London Bridge.

Helen Knowles (b.1975) is an artist and curator of the Birth Rites Collection. She has a BA Hons from Glasgow School of Art and MFA Fine Art from Goldsmiths University. Knowles’ practice stems from an interest in the new sovereign territories of the internet and the digital world. Her most recent film work, The Trial of Superdebthunterbot, is a 45 minute doc-fiction where she put a debt collecting algorithm on trial at Southwark Crown Court. The defence and prosecution was written and performed by real lawyers and a real jury deliberated to find whether the algorithm was guilty or not.

Established in Manchester in 1995, FutureEverything is an award-winning innovation lab and cultural organisation that has helped shape the emergence of digital culture in Europe. Through a programme of art commissions, exhibitions, critical conversations, labs and participatory events, FutureEverything pushes creative boundaries and stimulates new ways of thinking, across a diverse range of sectors, disciplines and audiences. Taking an action-research, artist-led and human-centred approach, FutureEverything is passionate about bringing people together to discover, share and experience new ideas for the future, creating opportunities to question and reflect on the world around us. https://futureeverything.org/