The power of data to save the River Oreto

In 2014, the Mare Memoria Viva Ecomuseum was set up near the river[1] which is now managed through an innovative experiment in public-private partnerships.  This space for community and culture is home to the latest artistic project by the duo Iaconesi-Persico: U-DATInos[2]. The opening of the project was presented online (via Facebook and Youtube) on 28-29-30 April[3]. During the three “aquatic” days, we discussed this new datapoietic subject focused on the idea of regeneration of the river and everything connected to it. The role of data and computation in the green/digital transition that Europe is looking at and the possible “active” collaboration between art and science represent some of the ingredients in the recipe proposed by the artistic duo Iaconesi-Persico (AOS[4]), founders of the new research centre HER – She Loves Data[5], in collaboration with the Ecomuseo Memoria Viva.

So near, so far away, from Turin to Palermo, passing through Rome – where project curator Arianna Forte conducted the event over several days – U-DATInos blew the lid off the pot, generating data and asking us how the world is fairing, what state we are in and how living beings are doing. What can we all do together?

From this space which offered an opportunity to imagine the future, the three days dedicated to U-DATInos (and more) opened up places for an exchange and sharing of ideas. The river with its data and its guardians (sixteen so far) not only supplied the map, but also provided thoughts and projects aimed at a future of regeneration, activism and a sense of responsibility.

It is precisely in the ability to be responsible that the River Oreto becomes the central protagonist of this important and complex project. The info-aesthetic artwork created by Iaconesi-Persico gave viewers the chance to reflect on different themes, where art as a propeller of imagination and an active metaphor for communication made this scenario a platform for the city’s inhabitants and communities to express themselves. U-DATInos becomes both a meditative space for listening to Palermo’s water and an amplifier for further projects such as the courageous ones presented by Saveria Teston with DARE[6], Andreco’s re-existence with Flumen – Climate Actions for parks and rivers in Rome between Art and Science[7] or the performance by Robertina Šebjanič with its audiovisual bestiary (almost oneiric) presented[8]. 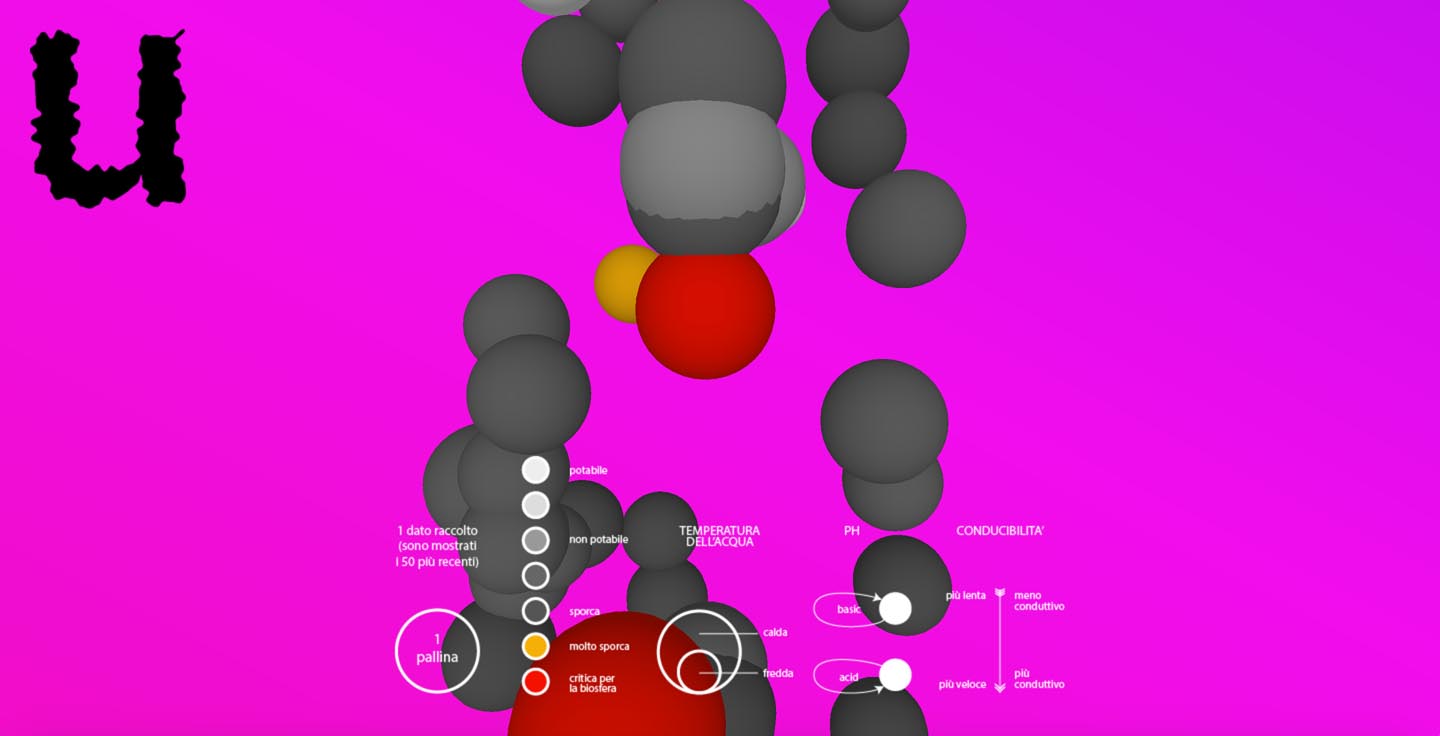 The installation that the Ecomuseum has decided to adopt is a stylisation of this plant in cyberpunk mode, shiny, almost echoing the theme of pollution, the tar that covers everything. In collaboration with Palermo’s FabLab[9], Iaconesi-Persico have recreated a three-dimensional model of the plant made up of electronic roots and coloured lights echoing the colours of water, e.g. the red light represents the most polluted water for the biosphere, while the blue light represents drinking water. During the three days of stimulating meetings, although in “airplane mode”, viewers felt they were taking part in a new social role, that of water guardians who, with their sensors, measure the chemical elements of water, its electrical conductivity and its temperature.  The “technological” plant installed in the Ecomuseum may die if there are no other water guardians, in other words the viewers, active spectators who are co-responsible for life and death. U-DATInos.  expresses its courage also in its fragility, exposing itself to the possibility of death but, more profoundly, to a message of hope. Exposing ourselves to vulnerability is a part of us, our “living memory” and our “living” future. Data is important; it represents a perspective, allowing us to connect with our planet. The recipe proposed by Persico-Iaconesi, together with the guardians of the River Oreto, trigger precisely these processes by activating rela(c)tions where the cure is the new antidote. To guard means to take care, thus elaborating a New Ritual, namely going to the river and collect data, monitoring life not only present in the water, but also our own. U-DATInos. its datapo(i)ethics practice generates sensitive thinking that engages people, activates different behaviours and critical ideas, with strong awareness, creating irreversible processes. The river, with its ancestral role, establishes a new ecosystemic culture in which to immerse ourselves in collective living, because the life or death of the plant (and not only that) depends on all of us. Moreover, the plant’s display of fragility, fear and suffering represents the mutual connection that art manages to produce, generating desires and relationships, which are as necessary as water to exist, to nourish us, otherwise the risk is precisely of extinction. The act of caring in its ubiquitous, natural and technological dimension floats in the flow of life, fertilising every space in the awareness of a conscious and active involvement. Taking part in the processes reactivates concepts, reworking the contrast in which we live. The U-DATInos project creates activism, good politics, awareness, connection, innovation, experimentation with new languages, practices and ways of life. To be “guardians” is not to preserve in isolation, but rather to open up possibilities for life.

U-DATI-nos U-DATI-nos U-DATI-nos as a chorus rumbles, cheers, challenges, exults so that this great and challenging match is the best version of a “watery” future, which is alive and deeply active. An echo reverberates: U-DATA-nos written in water and on my face runs its perpetual motion. I wear it, I feel it, I incorporate it[10]. Hurray!!! 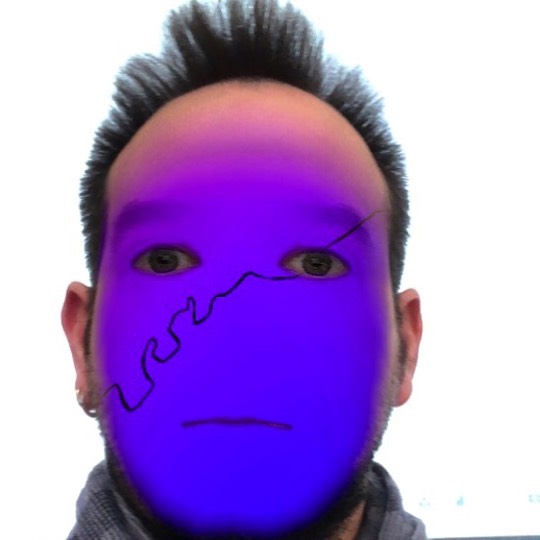 [1] The project is financed by CLAC of the CONILSUD Foundation in partnership with the Municipality of Palermo – Department of Culture with Francesco Giambrone. involving the Museum and Exhibition Spaces Service under the Municipality of Palermo Department of Culture, CLAC and MMV. The non-profit association Mare Memoria Viva, a CLAC spin-off founded in 2014 to manage the ecomuseum and the cultural and educational activities connected to it, is a community of aims and practices brought together by the museum and focused on the protection of its territory of reference, the south-east coast of the city of Palermo. Dream Team: Cristina Alga, Marina Sajeva, Giuliano Fontana, Valentina Mandalari, Paola Bommarito, Adriana Lupo and Roberta Cataldo https://www.marememoriaviva.it

[2] The U-DATInos project is supported by the General Directorate for Contemporary Creativity of the Ministry of Culture within the Creative Living Lab II programme. The project leader is the Mare Memoria Viva Urban Ecomuseum. Scientific and technological partners: HER: She Loves Data. Concept: Salvatore Iaconesi & Oriana Persico. Curatorship: Arianna Forte. https://udatinos.eu/

[6] The project DARE Digital Environment for Collaborative Alliances to Regenerate Urban Ecosystems in Middle-Sized Cities aims to facilitate, support and accelerate the design and implementation of the urban regeneration process of the Ravenna Docks through three main actions: the creation of a digital environment not only to collect data, but also to manage, consult and create content. https://www.uia-initiative.eu/en/uia-cities/ravenna.

[7] Flumen focuses on Rome’s Municipality IV, focusing on the Aniene, Tiber and Veio Park areas. Meetings, explorations, performances, exhibitions and workshops will involve adults, children and young people in a project to discover the river ecosystem that characterises their city and makes it special, in a collective experience in contact with nature. https://www.climateartproject.com/.

[8] The audiovisual project Co_sonic 1884 Km2 looks at the river from the perspective of its animals. In doing so, Robertina Šebjanič moves away from an anthropocentric view of the world, allowing for a different way of looking at the natural world. This alternative perspective on the Ljubljanica river basin is made possible by the very substance of water, both as a flowing liquid and as a biotope for elm trees or various species of fish. Just as the water moves, elms, cacti and trout migrate along the river. Elms, although normally confined to underground karst caves, are sometimes brought to the surface by flooding. Floods play an important role in the water cycle, providing food for organisms living underground. From the point of view of the Other, therefore, it is always the same watercourse. Through the use of sounds and images, the Slovenian artist, an incisive protagonist during Ars Elctronica, highlights the (co)dwelling of different forms of life in a series of river environments. Co_sonic 1884 Km2 presents us with a snapshot of the present time, where rivers around the world are losing their vitality due to human activity. The project also explores the concept of deep time and offers visitors an understanding of how the environment has developed over the centuries. Šebjanič opens our eyes and urges us to develop an empathy for non-human life forms, thus changing our attitude towards ecosystems, with the aim of ensuring their sustainability in the future. This represents a non-anthropocentric vision, achieved by a co-creative collaboration mixing living systems, sound art, installations and interactive-reactive environments.

[10] The Udatinos snapcam filter, created by artists Salvatore Iaconesi and Oriana Persico, allows you to “wear” the River Oreto.