The art and design studio Ultravioletto has been invited to the Romaeuropa Festival, Digitalive19 section, to present Sonic Arms, a dance involving mechanical arms, lights and images. The choreography is based on generative music where a robot’s movements and sound flow are inextricably linked. Using an interdisciplinary and collaborative approach, Ultravioletto explores the possibilities that can be found between the analogue and the digital to examine the relationship between man and technology. 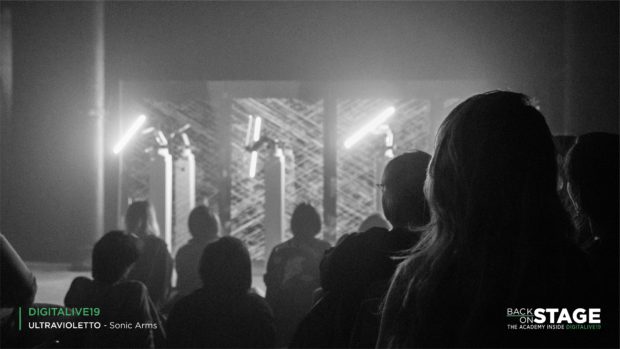 Sonic Arms is a project in constant evolution consisting, specifically, of four robots (at the front) and four screens at the back which come to life together with an audio production.
What is striking, at first, is how the four robots are activated, each robot made up of a mechanical arm placed on a pedestal and a neon light with three different levels of intensity which literally open the “dances”. 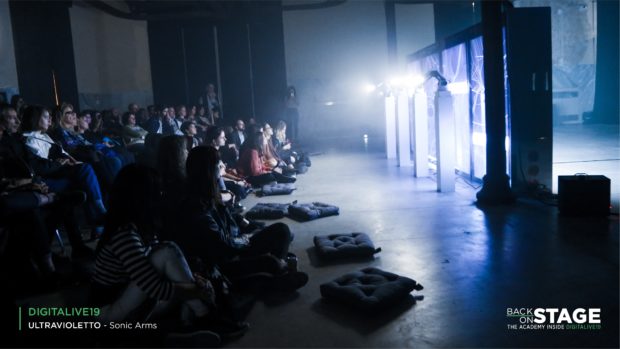 During the installation, the robotic movements are connected to the video being reproduced on the screens: geometric compositions, more or less harmonious, accompany the curious and aseptic behaviour of the robots, guiding the spectators into a virtual dimension in which there is no real narrative; the continuous alternation between the first and second sequence makes the entire installation unique and homogeneous. 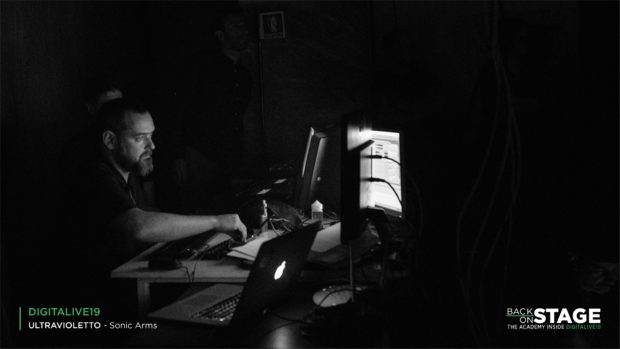 In Sonic Arms Ultravioletto has programmed the control software of the robotic arms, implementing reverse kinematic motion and communication protocols between the media. Ultravioletto has developed a framework to create robotic audio-reactive choreographies.

Sonic Arms follows the group’s distinctive line of research: space is rethought starting from the analogue, where mechanical devices, physical and kinetic sensors are incorporated into the interaction design system that defines the processes of exchange between humans and mechanical-IT systems. Everything is manipulated by the digital system which redesigns the work, achieving an equilibrium of experience between the work and spectators. 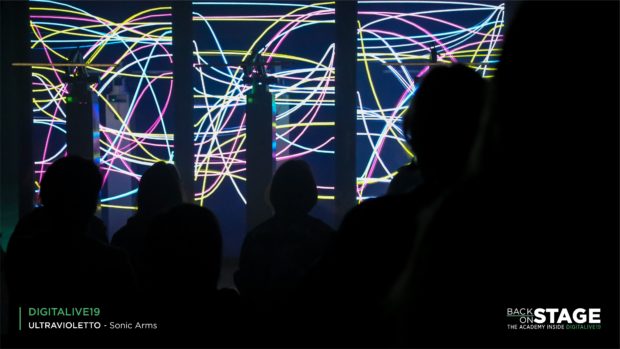 When Ultravioletto staged its first work for the Film Festival at the Baths of Diocletian in Rome in 2015, the perception of space and landscape was already being altered by the work. 405 Dialogues (405 nanometers is the wavelength of visible light used in this installation) intimately reflects on space and light in different ways, but continues in the same research direction. It consists of an ethereal flow made up of one hundred lasers in continuous evolution that enter into a dialogue with space.

Ultravioletto is an art and design studio that plans and manufactures integrated systems for visual communication. Experimentation and research animate a team of computational designers and creative coders. The studio’s projects range from interactive installations for immersive environments to editorial solutions for generative graphics, emphasising the use of robotics in art. Ultravioletto’s work aims to develop unconventional interactive interfaces and new effective visual communication formats. In the field of academic research, Ultravioletto actively collaborates with public and private institutions including: RUFA, University of Tor Vergata (degree course in Sonic Arts) and the Department of Virtual Set Design of La Sapienza University. Presented at Digitalive, Sonic Arms is a project in continuous evolution.