The performance by ZU collective for the Romaeuropa Festival – Digitalive19, Terminalia Amazonia, describes the life that flows silently, renews itself, dies and changes within the Amazon rainforest habitat. The artist Lillevan’s visual contribution gives body and light to the sound performance, immersing viewers in a dreamlike landscape, glowing with drops of water, golden dust, branches, rays of light, earth and humidity. This is a fertile and familiar place. 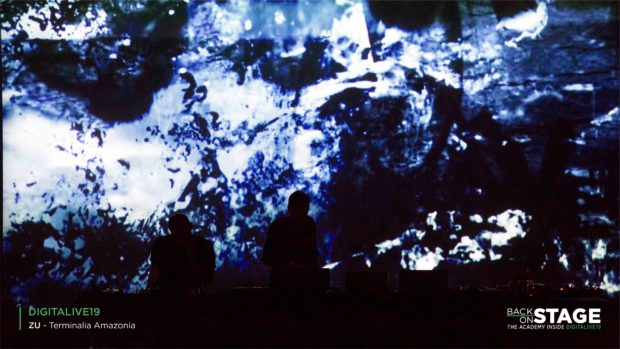 The ZU group, active for years in the field of research and experimentation, took four years to create this project which comes together in the sound diary that narrates a timeless experience, the story of a single moment lasting endless centuries.

Over several years, the band members regularly visited an indigenous village hidden on the Ucayali River, near the Peru-Brazil border. They immersed themselves in the ancient knowledge, teachings and rituals of the local culture of the population. For this indigenous population, singing is their main method of healing, even before the use of medicinal plants. 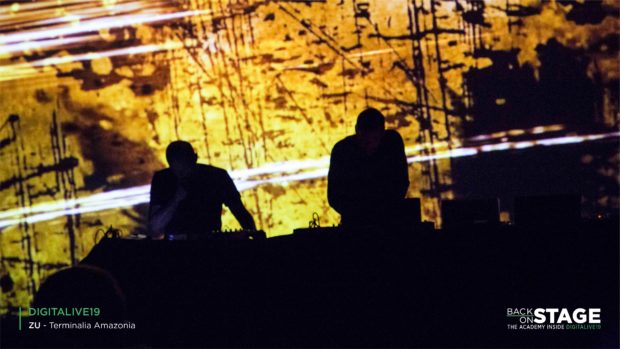 Terminalia Amazonia, therefore, represents the union of two different elements: the magical voices of the shamans and ZU’s sound research, which takes these voices as a model to create sounds that seem to belong to mysterious electronic creatures. The sound acquires a shamanic force and makes perceptible the ethereal elements of the invisible.

The ZU collective has been active for over fifteen years and its music ranges over different genres such as metal, hardcore punk, jazz, noise, electronics and no-wave. This latest project emerged from the need to change their perspective. Living in such a primordial and wild place inevitably reverses a comprehensive view of life and the world and, through Terminalia Amazonia, ZU gives voice to the wordless message which this world, so different from ours, is unable to communicate. The sound immerses spectators at the centre of the indigenous Kuranders’ shamanic rite: a magical song that blends with the earth and ancestral rhythms, allowing a connection to be established between a native ritual and a contemporary rite generated through digital systems. 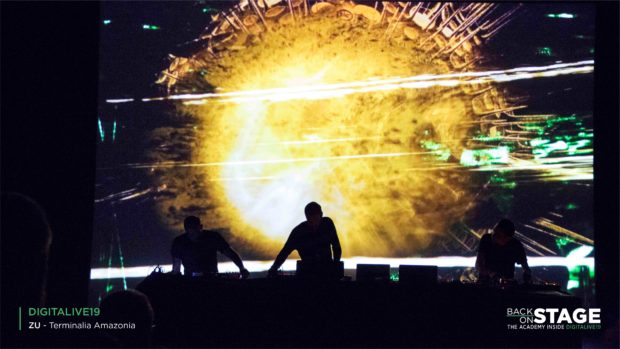 The spectator’s thoughts are immediately directed towards the fragility of this habitat, one that has been protected and preserved with infinite care by its indigenous inhabitants for hundreds of years, but which is now threatened by man’s carelessness and greed. A tragic core of pain is contained inside the sound, reminiscent of ancient Eleusinian mysteries that recount descending into the deep and returning to the surface. Terminalia Amazonia is, in essence, a journey that takes us far from and, at the same time, close to ourselves, to rediscover a message that is buried but not lost.

ZU. The Roman group, founded by Luca T. Mai, Massimo Pupillo and Jacopo Battaglia in 1992, has performed over 2000 concerts across Europe, the United States, Canada, Asia, Russia, Mexico and Africa, collaborating with such artists as Faith No More, Fantomas, The Melvins, Sonic Youth, Einstürzende Neubauten and others. The group has released 16 albums to date, moving between different musical genres and sound experiments.