Focus on two works on display within the project Il video rende felici, an extensive exhibition on video art in Italy

If one looks at it carefully – or perhaps we should say if one lives with care – the exhibition Videos Make You Happy. Video Art in Italy, curated by Valentina Valentini, on display in both the spaces of Palazzo delle Esposizioni and Galleria d’Arte Moderna in Rome until 4 September 2022, one notices that the innovative force in the field of multimedia inhabited and still inhabits the Bel Paese, under the timeless, dusty veneer of Ancient Rome and the Renaissance.

The last decades of the 20th century witnessed an incredible and, until then, unforeseen expansion of the concept of the medium. From the display of the first “environment” to that of interactive multimedia spaces, this development took less time than it took Michelangelo to finish the Sistine Chapel. Everything was super-fast and the innovations of video art, computer art and, later, net art remained a beacon of hope for those who yearned for this new way of perceiving, understanding and feeling the world, echoing the spirit of the time they lived in, and who refused to be anaesthetised by conservative attempts to re-establish a reassuring bourgeois order through a return to the familiar form of painting.

In this double exhibition, each historical period has its own special interest but also relates to what happened previously and what is to follow. To give just a few examples: the video-TV experimentations of the 1970s (Il televisore che piange, Fabio Mauri); the first video environments (Film Ambiente, Marinella Pirelli); the fanzines that combine with computer art in an underground exultation (Computer Comics, Giovanotti Mondani Meccanici); the fascinating, innovative sensitive environments (Coro, Studio Azzurro); and, finally, videos which are looking for a connection between sense and concept, both in the old (Il vapore, Bill Viola) and new millennium (Fatica no.26, Daniele Puppi), and so on.

But where is video art heading today? Where is this disruptive practice, which has now celebrated its 50th anniversary during which it has witnessed the transformation of almost everything around it? Valentini’s exposition does not fail to take this question into account, providing more than a single answer, which is the only way it could be in such an extremely fragmented reality as ours. Between these responses, two works by two different, incredibly talented artists, both of Roman origin, lead one to reflect on issues specific to new technologies in art and their relationship to the fluid reality in which they are immersed. These are Video Machine Mobile (2022) by Donato Piccolo and Transient #E_001-04_4ch (2020) by Quayola. 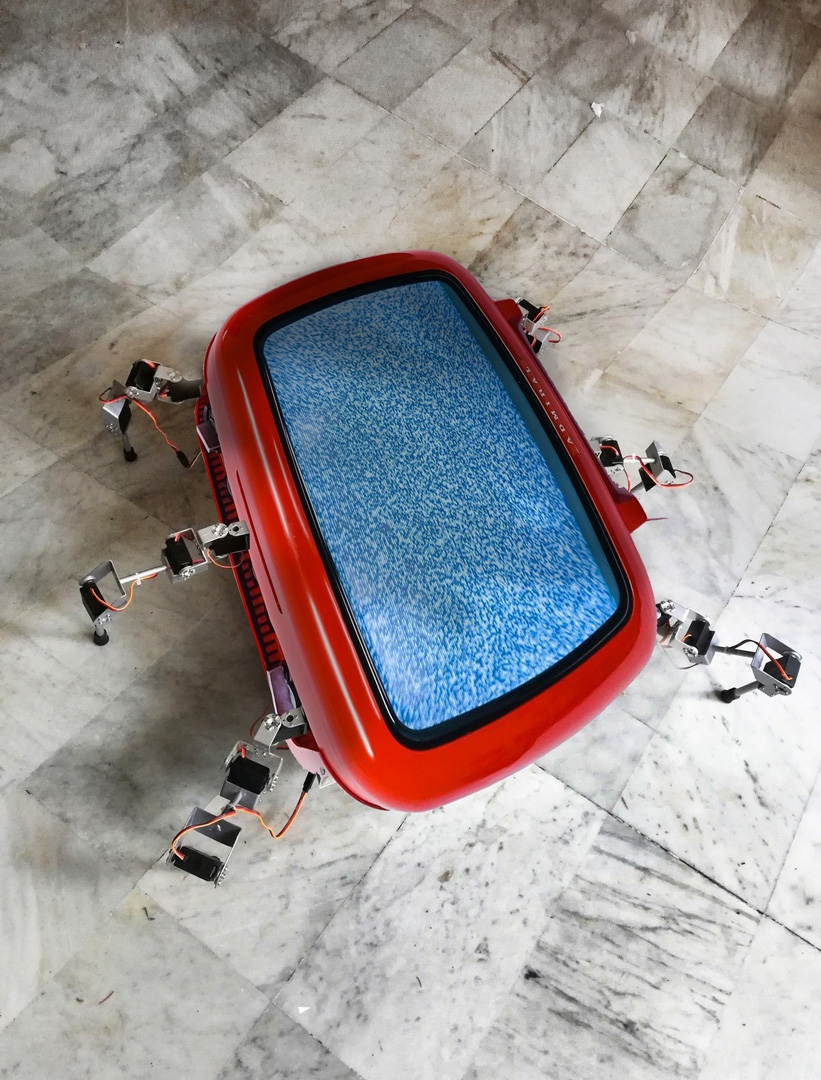 Piccolo’s video sculpture consists of a 27-inch monitor supported by robotic legs and powered by artificial intelligence software which allows the structure to move and monitor surrounding spaces. Thanks to several ultrasonic sensors, it creates small interactions with the environment and is powered by a cable connected to the monitor, which metaphorically acts as a ‘leash’, holding the work in its designated space.

Quayola’s polyptych, on the other hand, is an installation variant of the Transient performance (a performance with musicians, robotic pianos and projections) composed of four 55-inch screens. It reflects on traditional art techniques by extending its experimentation to sound through unconventional generative systems, using software that allows the interconnection of images and sounds.

Two very different works – yet so similar. They represent the technological developments of traditional sculptural and pictorial art, respectively, hybridising them in video art and by other means, while retaining their original ontology. These works reformulate a non-trivial question for today concerning the entire second half of the 20th century and which Brian O’Doherty, in his famous essay on the white cube, analysed through the rhetorical device of a tension between the Eye and the Spectator. O’Doherty maintains that the Eye analyses and interprets, and adapting to contemplation and maintaining a distance, it is particularly well suited to classical painting. The Spectator, however, can be understood as his or her body, which perceives through all the senses except sight, above all experiencing the tactile qualities of the environment through the sensations triggered by the Spectator’s experiences. He or she is particularly well suited to environments and performances, but also to sculpture because of its three-dimensional qualities that require the Spectator to move around in order to contemplate it.

Strangely enough, even in Quayola’s video-polyptych, expressly dedicated to Impressionism, the eye engages in contemplation. As is well known, television and all its subsequent postmodern transformations are based on shock, thus on tactile qualities that affect the brain and not the eye. This also occurs in ‘traditional’ video art with its dark environments, projections and non-linear narratives. Contemplation almost disappears from the art radar for an infinite number of reasons. In Quayola’s work, however, it is present. It is not exclusive, due to its simultaneous charge as a multi-agent device, but it is nevertheless there. It is not so much a return to the past as a step forward in realising that, after all, the cultic aura that Benjamin takes for granted as having disappeared has somehow returned in binary language. This cultic aura dedicated to the gods, then to the one god, until Nietzsche decreed his death, leaving a void that various (more or less) materialist concepts have tried to fill over and over, without success, has reappeared in a hybrid world. This time it is analogical-digital, as it was in the pre-nineteenth-century material-spiritual world. There is a new god on the horizon, speaking in bits, able to be contemplated again. Leibniz would say “mathematics is the language of God”.

Turning to Piccolo’s video sculpture, this is not just a sculpture but an experienced agent that, in turn, experiences. It sets up communication, filtered and re-filtered several times, not just with romantic aesthetic sensations, but also with reality. It makes us vibrate, shudder, relate to the inanimate becoming animate, but not as a result of its sublime gifts. The spectator’s eye looks and is looked at by its anti-optical machine counterpart. The spectator’s body does not simply circle the sculpture, nor does it pass through it, as in an installation. It actually experiences the work dynamically on an equal basis and every step is calibrated to that of the sculpture. What is experienced in front of the monitor is a reciprocal relationship, one that unsettles and becomes dance.

What is striking in both works is the orthodox way they somehow remain as sculpture and painting. It would be almost trivial to talk about these characteristics with regard to multimedia and multidimensional contemporary artworks – environments that challenge the concept of art, whatever that may be. Instead, here we are faced with a sculpture and a polyptych of 21st century paintings. Works that fit perfectly into the artistic tradition while also being part of the contemporary zeitgeist. Pure art based on the medium. The two pieces of artificial intelligence software represent the brush and the chisel of the two works, shaping their sense of existence and meaning. They represent the contemporaneity of video art, which has moved from optical to tactile, emerging as new in an analogue-digital reality.